China, Russia top officials meet in show of solidarity against EU, US 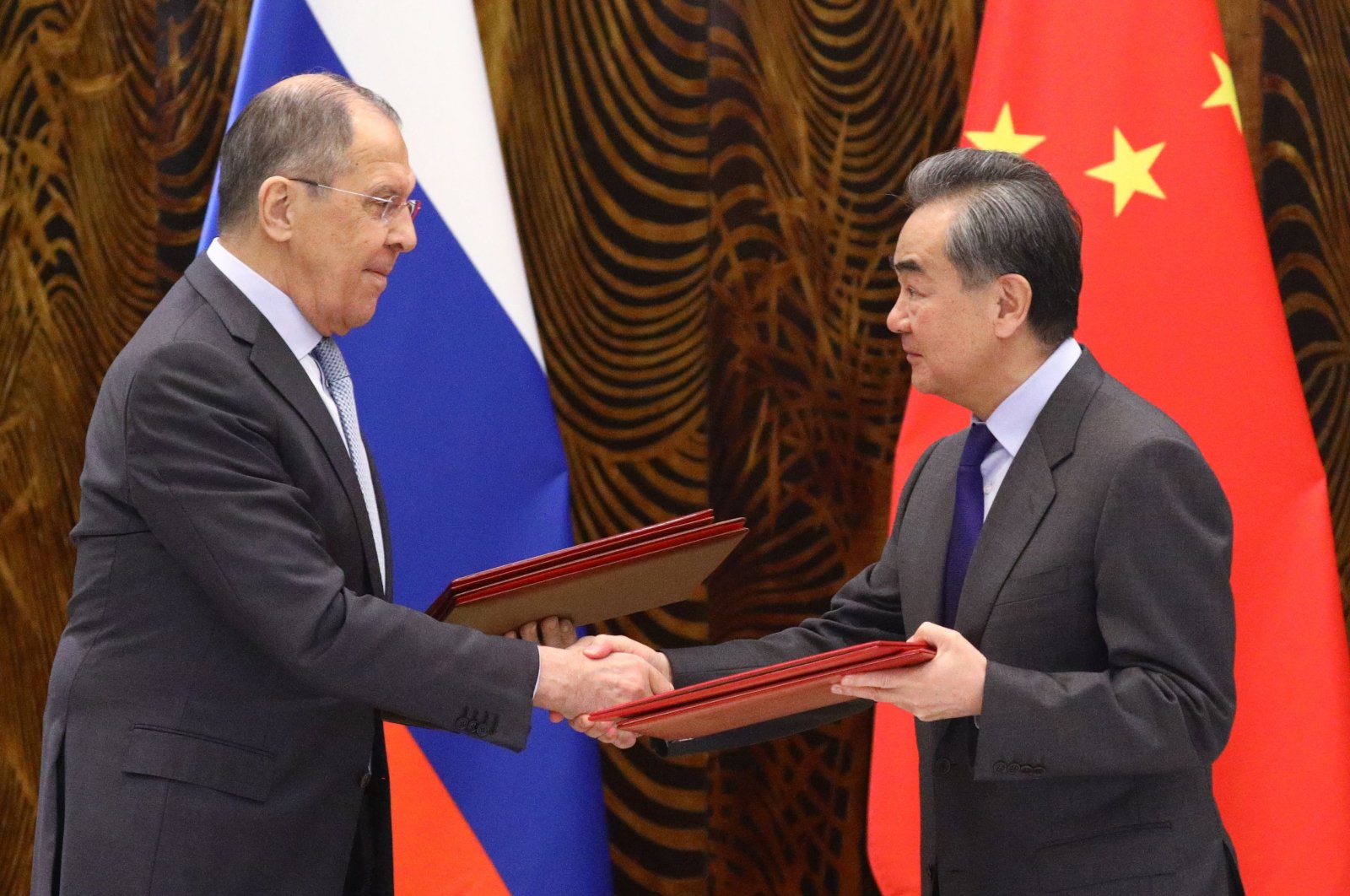 The foreign ministers of China and Russia affirmed their countries' close ties at a meeting Tuesday, amid intense criticism and new Western sanctions against them over human rights.

Wang Yi and Sergei Lavrov rejected outside sniping at their authoritarian political systems and said they were working to further global progress on issues from climate change to the COVID-19 pandemic.

At their initial meeting in the southern Chinese city of Nanning on Monday, Wang and Lavrov accused the United States of interference in other countries’ affairs and urged it to rejoin the Iran nuclear agreement, something that U.S. President Joe Biden’s new administration has approached cautiously.

Russia and China both maintain close relations with Tehran, with which they share a firm approach against any political opposition.

The two officials continued that rhetoric at a news conference on Tuesday, where Wang sharply criticized coordinated sanctions brought by the European Union, Britain, Canada and the U.S. against Chinese officials over human rights abuses in China’s far western Xinjiang region.

"Countries should stand together to oppose all forms of unilateral sanctions," Wang said. "These measures will not be embraced by the international community."

In a joint statement issued after the meeting, the two ministers said no country should seek to impose its form of democracy on any other.

"Interference in a sovereign nation's internal affairs under the excuse of ‘advancing democracy' is unacceptable," the statement said.

China says members of the Uyghur and other Muslim minority groups in Xinjiang have voluntarily taken part in job training and de-radicalization courses, denying charges that more than 1 million have been locked up in prison-like reeducation camps where they are forced to reject their native culture and pledge loyalty to the ruling Communist Party and its leader Xi Jinping.

They were barred from visiting mainland China, Hong Kong and Macao and banned from engaging in financial dealings with Chinese institutions. Xinjiang had experienced anti-government violence, but Beijing claims its massive security crackdown brought peace in recent years.

China and Russia were rivals for leadership of the communist world during the Cold War but have built a strong relationship in recent years based on opposition to the U.S.-led liberal order and cooperation in military affairs, technology and trade in natural resources.

China's ruling Communist Party allows no political opposition and keeps a tight hold on civil society, while Russian leader Vladimir Putin has cracked down heavily on citizens calling for a more open system. Russia has been under Western sanctions for years over its seizure of the Crimea, support for separatists in western Ukraine and attacks on government critics.

The new EU sanction system imposed on China is similar to the Magnitsky Act, the Obama-era legislation that authorized the U.S. government to sanction those it sees as human rights offenders, freeze their assets and ban them from entering the U.S.

China and the U.S. held contentious talks in Hawaii last week while U.S.-Russia relations took a severe hit last week as well after Biden, in an ABC News interview broadcast said "I do" when asked if he believed the Russian president was a killer.

Putin retaliated when asked about Biden’s remarks saying it “takes one to know one” and charged that the comments reflect the U.S.’ own troubled past. The Russian leader pointed at America's past history of slaughtering Native Americans and slavery, arguing that the painful legacy has weighed on the U.S.

Also Tuesday, Australian Foreign Minister Marise Payne and her New Zealand counterpart Nanaia Mahuta said in a joint statement that they shared concerns about the rights situation in western China and joined in calls for an independent inquiry.

"Today, we underscore the importance of transparency and accountability, and reiterate our call on China to grant meaningful and unfettered access to Xinjiang for United Nations experts, and other independent observers,” the statement said.

U.S. Secretary of State Antony Blinken said in a statement that a united response "sends a strong signal to those who violate or abuse international human rights, and we will take further actions in coordination with likeminded partners.”

China recently put on trial two Canadian citizens, Michael Spavor and Michael Kovrig, in apparent reprisal for Canada's detention in December 2019 of Meng Wanzhou, an executive of Chinese telecoms giant Huawei. No verdicts have been announced.

The U.S. wants Meng extradited to face fraud charges, enraging China, which views her detention as politically motivated. Canadian Prime Minister Justin Trudeau denied any connection between his country's support for the sanctions action and the fates of Spavor and Kovrig, according to Canadian broadcaster CTV.

China has accused Spavor and Kovrig of working together to steal Chinese state secrets, but has offered no details and barred media and diplomats from the proceedings.

"We’ve been deploring the arbitrary detention of the two Michaels (Kovrig and Spavor) for a long time and we’ve been working with our allies around the world on this issue," Trudeau told CTV.

"On an unrelated issue, we along with our international allies are very concerned about the situation facing Muslim minorities in western China."