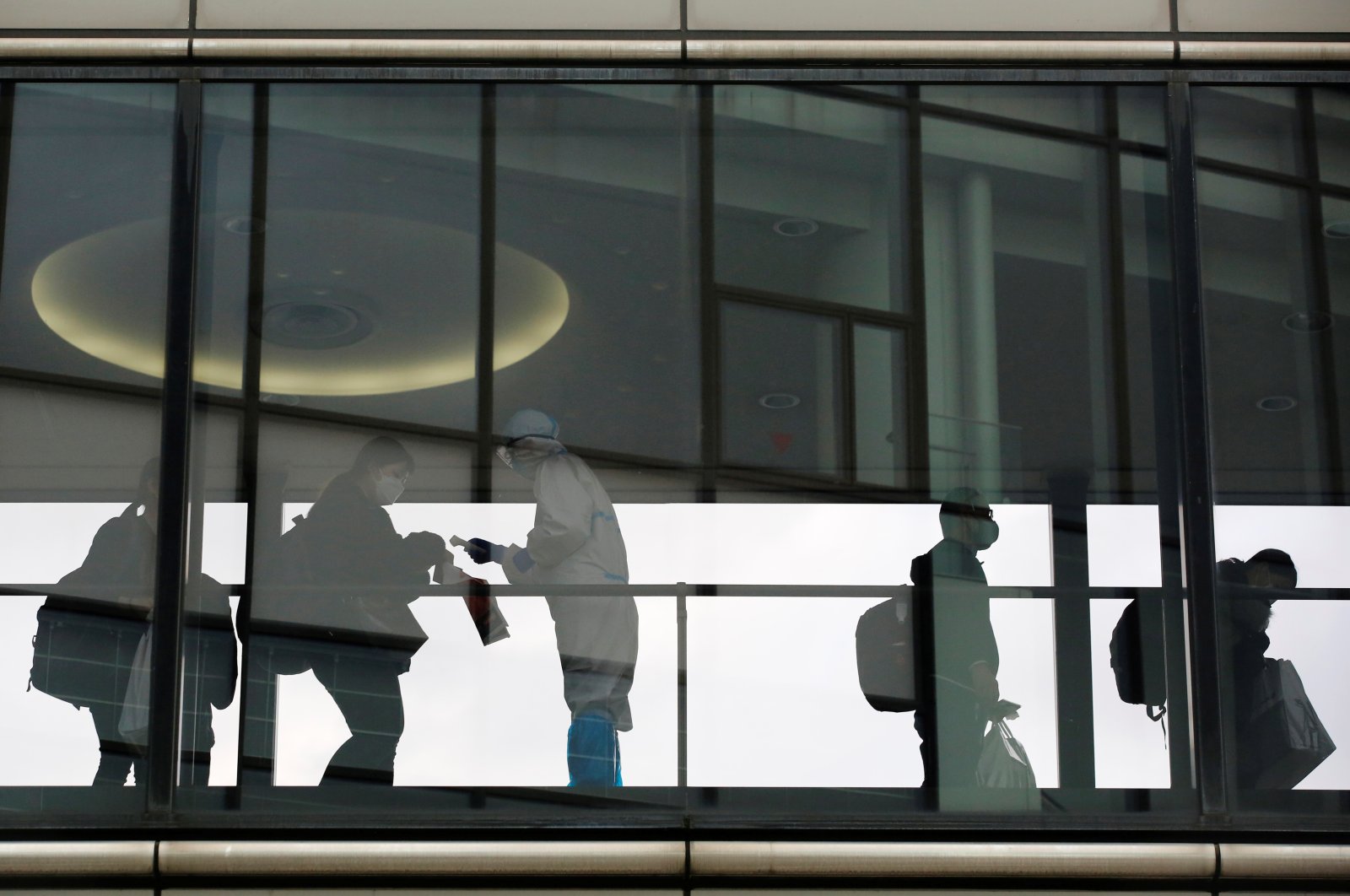 A member of staff wearing a protective suit checks the temperature of a passenger boarding an international flight at Narita International Airport on the first day of closed borders to prevent the spread of the new coronavirus omicron variant amid the coronavirus pandemic in Narita, east of Tokyo, Japan, Nov. 30, 2021. (Reuters Photo)
by REUTERS Nov 30, 2021 8:50 am
RECOMMENDED

Hong Kong extended a ban on entry for nonresidents from several countries as global health authorities raced to curb the spread of the omicron COVID-19 variant, while Australia will review on Tuesday containment steps after five travelers tested positive.

Singapore's Ministry of Health said two travelers from Johannesburg who tested positive for the variant in Sydney had transited through its Changi airport.

Omicron – which the World Health Organization (WHO) said carries a "very high" risk of infection surges – has triggered global alarm, with borders closing, casting a shadow over a nascent economic recovery from the two-year pandemic.

However, reports that the variant might be milder than feared have helped restore some calm to markets after a rout on Friday that saw roughly $2 trillion being wiped off the value of global stocks. Traders also took comfort from remarks by United States President Joe Biden that the U.S. would not reinstate lockdowns.

Countries around the world have moved quickly to tighten border controls to prevent a recurrence of last year's strict lockdowns and steep economic downturns.

On Monday, Hong Kong authorities said nonresidents from Angola, Ethiopia, Nigeria and Zambia would not be allowed to enter as of Nov. 30.

"The most stringent quarantine requirements will also be implemented on relevant inbound travelers from these places," the statement said.

Additionally, nonresidents who have been to Austria, Australia, Belgium, Canada, the Czech Republic, Denmark, Germany, Israel and Italy in the past 21 days would not be allowed to enter the city from Dec. 2, it added.

In Australia, five travelers infected with omicron are vaccinated and in quarantine, health officials said, adding they are asymptomatic or showing very mild symptoms. Authorities have also identified a sixth traveler who was most likely infected with the variant and had spent time in the community.

Canberra on Monday delayed the reopening of the nation's borders for international students and skilled migrants less than 36 hours before they were due to be allowed back in.

"We're doing this out of an abundance of caution but our overwhelming view is that while (omicron) is an emerging variant, it is a manageable variant," Federal Health Minister Greg Hunt told a media conference.

Another patient has been tested positive for the omicron variant of the coronavirus on the French Indian Ocean island of La Reunion, media reported on Tuesday, citing an official researcher on the island.

French media added the person was a 53-year-old man who had traveled to Mozambique and made a stopover in South Africa. The patient is currently in isolation.

First reported on Nov. 24 from South Africa, omicron has since spread to over a dozen countries. Portugal found 13 cases at a Lisbon football club. Spain, Sweden, Scotland and Austria also reported their first cases of the variant.

The WHO has urged countries to use a "risk-based approach to adjust international travel measures." The U.S. has blocked entry for most visitors from eight southern African nations, saying this would give the country time to get more vaccinated. The global curbs, however, have triggered concerns about vaccine inequality.

"The people of Africa cannot be blamed for the immorally low level of vaccinations available in Africa – and they should not be penalized for identifying and sharing crucial science and health information with the world," U.N. Secretary-General Antonio Guterres said in a statement.

India and China have close ties with many African countries, but Beijing has pumped more money into the region and on Monday promised to invest another $10 billion. India said it had supplied more than 25 million doses of domestically made shots to 41 African countries, mostly through the global vaccine-distribution network COVAX.

"The Government of India stands ready to support the countries affected in Africa in dealing with the omicron variant, including by supplies of made-in-India vaccines," the foreign ministry said in a statement. "Supplies can be undertaken through COVAX or bilaterally."

It said the government had cleared all orders placed by COVAX for supplies of the AstraZeneca vaccine to countries such as Malawi, Ethiopia, Zambia, Mozambique, Guinea and Lesotho, apart from delivering doses of the homegrown Covaxin shot to Botswana. It did not mention how many doses have been approved recently.

"Any new requirement projected either bilaterally or through COVAX will be considered expeditiously," it said, also promising the supply of lifesaving drugs, test kits, gloves, PPE kits and medical equipment such as ventilators as per requirement.

India last month resumed overseas shipments of COVID-19 vaccines for the first time since April when it banned exports to inoculate its own citizens as infections surged.

Domestic vaccine production has more than tripled since then to about 300 million doses a month. The country has administered at least one dose to 83% of its 944 million adults and two doses to 47%.