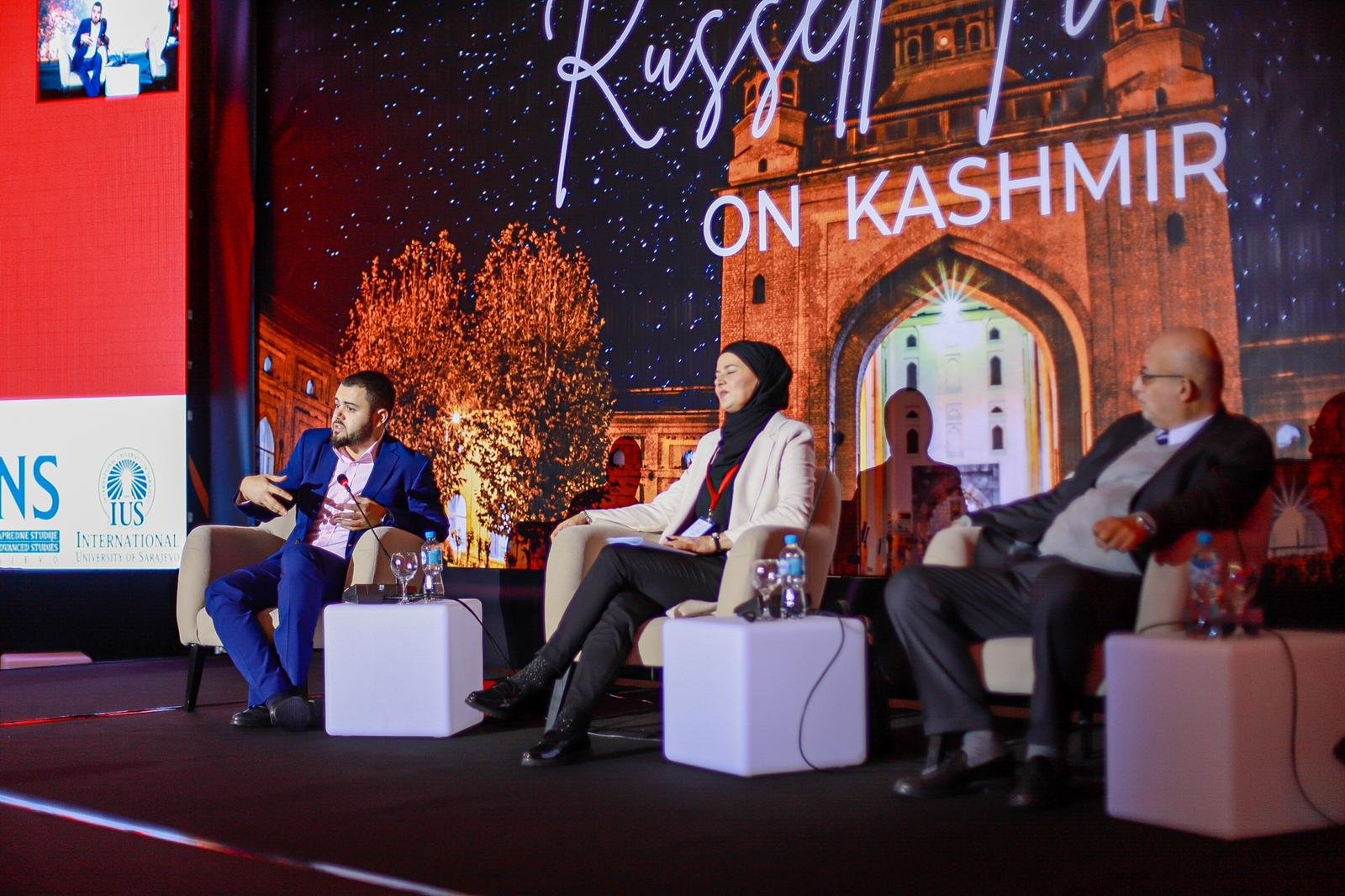 Panelists are seen during the Russell Tribunal on Kashmir in Sarajevo, Bosnia-Herzegovina, Dec. 18, 2021. (Courtesy of Kashmir Civitas)
by Alen Lepan Dec 20, 2021 2:50 pm
RECOMMENDED

Decolonization, settler-colonialism, crimes against humanity, genocide and nuclear threats emerging from the disputed territory of Indian-administered Jammu and Kashmir were marked at an inaugural tribunal in Sarajevo that sought to draw global attention to the atrocities committed in the Muslim-majority region.

Prominent global personalities, academics, civil society representatives and students convened in Bosnia-Herzegovina’s capital over the weekend for the Russell Tribunal on Kashmir to highlight oppression and suffering in the region that has been the source of decadeslong tensions between nuclear-armed neighbors Pakistan and India.

The foundational international event is the first of many tribunals being planned for the coming years, said Farhan Mujahid Chak, secretary-general of Kashmir Civitas, a Canadian-registered nongovernmental organization (NGO).

“This is only the first one. There will be many more over the coming years,” Chak told Daily Sabah.

The tribunal aimed to set the stage to expose the seriousness of the Kashmir conflict, one of the oldest unresolved international problems in the world that has been on the agenda of the United Nations Security Council (UNSC) since 1948.

Kashmir has been divided between India and Pakistan since the end of British colonial rule in 1947. Both Pakistan and India claim the Himalayan territory in full but rule it in part, and have fought two wars against each other there.

Tensions were renewed in the region in 2019 after New Delhi stripped Kashmir’s semi-autonomy, scrapped its statehood and removed inherited protections on land and jobs.

India has long faced allegations of rights abuses in its portion of the territory. It tightly controls access to Kashmir for foreign observers, including the U.N.

“We hope this conference raises awareness on the setter-colonialism, human rights violations and the Kashmiri aspiration for self-determination,” Suleiman noted.

The tribunal also aimed to express solidarity with the community in Bosnia-Herzegovina, which is going through its worst political crisis since the Dayton peace accords ended its war in 1992-1995.

Deep tensions triggered by Bosnian Serb separatist moves have provoked fears of a renewed conflict in the country, where more than 100,000 people were killed and millions were left homeless in the worst bloodshed in Europe since World War II.

The tribunal wanted to also mark the 1995 massacre in Srebrenica – Europe’s only acknowledged genocide since World War II.

“We wanted to talk about genocide not just in Srebrenica, which is important to remind the world of, but also other genocides that happened in Kashmir too, and we wanted to do it to find those parallels,” Chak told Daily Sabah.

“I believe there is a streak of Islamophobia that is running through both of these tragedies. And then we wanted to go through the whole idea of decolonization ... We wanted to bring victims of genocidal actions together so they can collectively confront the enemies, the Islamophobes, the tyrants and the global criminals.”

It included a discussion on Srebrenica and on Jammu and Kashmir, where an estimated 230,000-500,000 people are reported to have been killed.

A panel of judges that listened and closely followed the proceedings is expected to finalize a report that will be distributed to U.N. agencies, the European Parliament and other world bodies and governments.

In their initial statement following the tribunal, judges said based on the evidence presented by area experts, the Kashmir issue should arguably be seen within a broader global context of settler colonialism, genocide and crimes against humanity.

“Serious accusations of genocide, crimes against humanity, rape as a weapon of war, unlawful arrests and mass blinding have been made,” they noted. “This is just the beginning of a long, arduous and judicious process to uncover the truth, but the live testimony we have heard thus far, and the reports and evidence we have seen, have left us with serious concerns about crimes, which appear to have been carried out on a massive scale.”

Chak stressed they wanted to highlight and champion the international law, the U.N. declaration on human rights and the Geneva Conventions.

The tribunal aimed to reaffirm the primacy of international law as the basis for solving the Kashmir conflict. Moreover, it sought to “raise awareness of the responsibility of the international community to prevent ongoing crimes against humanity and the potential for a genocide to occur,” the statement read.

The event resulted in a partnership that will see Jammu and Kashmir Memorial Center being set up, Chak said, similar to Srebrenica Genocide Memorial Center, a place of remembrance that was established in 2000 for the victims of the 1995 genocide.

“I have already begun all of this process and that is one of our deliverables,” he noted. “We are working on a long-term plan on how we want to move this forward.”

“We need to keep doing this – raising awareness and shining the spotlight on the crimes that have happened to prevent them from happening again.”

“It is absolutely disgusting the way the world community is not showing any support. They are not supporting us because we are Muslims. Our lives are not as valuable in their mind,” he noted, recalling the “habit” of social media platforms shutting down Kashmiri and Palestinian accounts.

“Their dilly-dallying is reflecting their own insincerity and their own complicity in concealing crimes against humanity and concealing genocide.”

Chak drew particular attention to a prominent activist who was arrested in Kashmir in late November.

Khurram Parvez, one of Kashmir’s best-known activists and head of Jammu Kashmir Coalition of Civil Society, a group of rights organizations working in the region, was arrested on terrorism funding charges by India’s federal National Investigation Agency (NIA).

He is being held under the Unlawful Activities (Prevention) Act, which allows for the detention of up to six months without trial.

“Khurram Parvez is a human rights icon,” Chak said. His only call of action is not political. He documents those killed and where it happened and who was responsible. And for that, he was arrested.