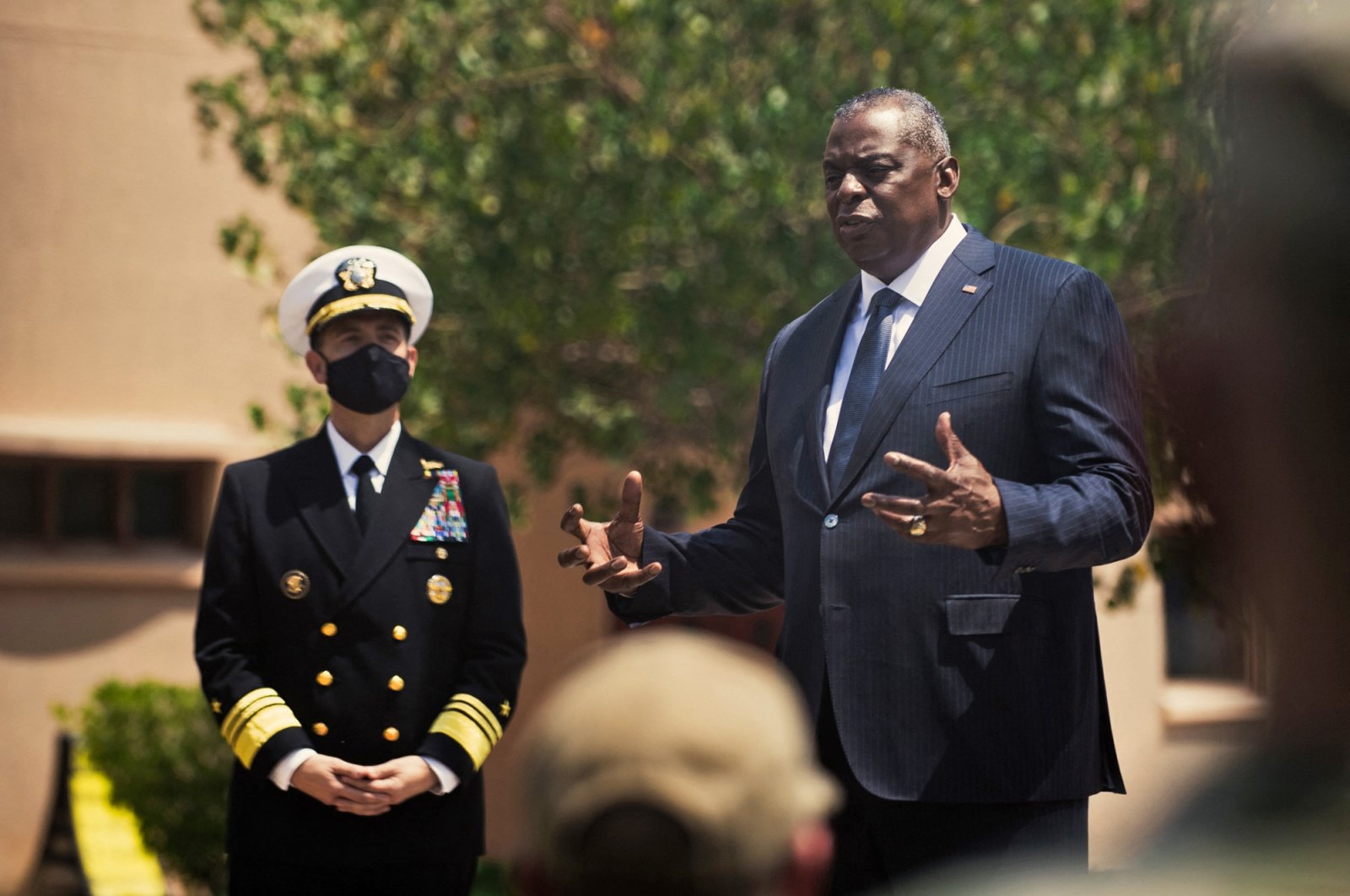 In this handout photo provided by the US Defense Visual Information Distribution Service (DVIDS), US Secretary of Defense Lloyd Austin addresses US and Bahraini personnel onboard Naval Support Activity in Bahrain, on September 8, 2021. (U.S. Defense Visual Information Distribution Service via AFP)
by ASSOCIATED PRESS Sep 09, 2021 9:30 am
RECOMMENDED

United States Defense Secretary Lloyd Austin said Thursday the al-Qaida extremist group that used Afghanistan as a staging base to attack the U.S. 20 years ago may attempt to regenerate there following an American withdrawal that has left the Taliban in power.

"That's the nature of the organization,” he told a small group of reporters in Kuwait City at the conclusion of a four-day tour of Persian Gulf states. He said the United States is prepared to prevent an al-Qaida comeback in Afghanistan that would threaten the United States.

The Taliban had provided al-Qaida with sanctuary while it ruled Afghanistan from 1996 to 2001. The U.S. invaded and overthrew the Taliban after it refused to turn over al-Qaida leaders following the Sept. 11, 2001 attack on the United States.

During the course of the 20-year U.S. war, al-Qaida was vastly diminished, but questions have arisen about its future prospects with the Taliban back in Kabul.

"We put the Taliban on notice that we expect them to not allow that to happen," Austin said, referring to the possibility of al-Qaida using Afghanistan as a staging base in the future. In a February 2020 agreement with the Trump administration, Taliban leaders pledged not to support al-Qaida or other extremist groups that would threaten the United States. But U.S. officials believe the Taliban maintain ties to al-Qaida, and many nations, including Gulf Arab states, are concerned that the Taliban's return to power could open the door to a resurgence of al-Qaida influence.

Austin has asserted that the U.S. military is capable of containing al-Qaida or any other extremist threat to the United States emanating from Afghanistan by using surveillance and strike aircraft based elsewhere, including in the Persian Gulf. He also has acknowledged that it will be more difficult without U.S. troops and intelligence teams based in Afghanistan.

Austin and Secretary of State Antony Blinken appeared together in Qatar on Tuesday in a show of U.S. gratitude for that Gulf state's help with the transit of tens of thousands of Afghans and others evacuated from Kabul. Blinken also visited an evacuee transit site in Germany, and Austin visited Bahrain and Kuwait.

Together, the Austin and Blinken trips were meant to reassure Gulf allies that President Joe Biden’s decision to end the U.S. war in Afghanistan in order to focus more on other security challenges like China and Russia does not foretell an abandonment of U.S. partners in the Middle East.

The U.S. military has had a presence in the Gulf for decades, including the Navy’s 5th Fleet headquarters in Bahrain. Biden has not suggested ending that presence, but he - like the Trump administration before him - has called China the No. 1 security priority, along with strategic challenges from Russia.

Austin, a retired Army general, has a deep network of contacts in the Gulf region based in part on his years commanding U.S. and coalition troops in Iraq and later as head of U.S. Central Command, which oversees U.S. military operations in the Middle East.

This week's trip, however, was his first to the Gulf since taking office in January. Austin had been scheduled to visit Saudi Arabia on Thursday as the final stop on his Gulf tour. But on Wednesday evening his spokesman, John Kirby, announced that the visit had been dropped due to "scheduling issues.”

Kirby offered no further explanation but said Austin looked forward to rescheduling. Austin indicated that his visit was postponed at the Saudis' request.

"The Saudis have some scheduling issues; I can't speak to exactly what they were,” he said.

The Saudi stop notably was to happen two days before the 20th anniversary of the terrorist attacks on the United States that killed nearly 3,000 people.

Fifteen of the men who hijacked commercial airliners and crashed them into the twin towers of the World Trade Center, the Pentagon and a Pennsylvania field on Sept. 11, 2001 were Saudis, as was Osama bin Laden, whose al-Qaida network plotted the attack from its base in Afghanistan.

The attack prompted the U.S. invasion that became a 20-year war in Afghanistan. U.S. relations with the Saudi government have been strained at times in the intervening years. In 2018, Crown Prince Mohammed bin Salman (MBS) oversaw an unprecedented crackdown against activists, rivals and perceived critics.The year culminated in the gruesome killing of Washington Post contributing columnist and dissident Jamal Khashoggi by Saudi agents in the Saudi Consulate in Turkey.

Earlier this month, President Joe Biden directed the declassification of certain documents related to the 9/11 attacks, a gesture to victims’ families who have long sought the records in hopes of implicating the Saudi government.

Public documents released in the last two decades, including by the 9/11 Commission, have detailed numerous Saudi entanglements but have not proved government complicity.

The Saudi government denies any culpability. On Wednesday the Saudi Embassy in Washington released a statement welcoming the move to declassify and release more documents related to 9/11, saying, "no evidence has ever emerged to indicate that the Saudi government or its officials had previous knowledge of the terrorist attack or were in any way involved in its planning or execution.”