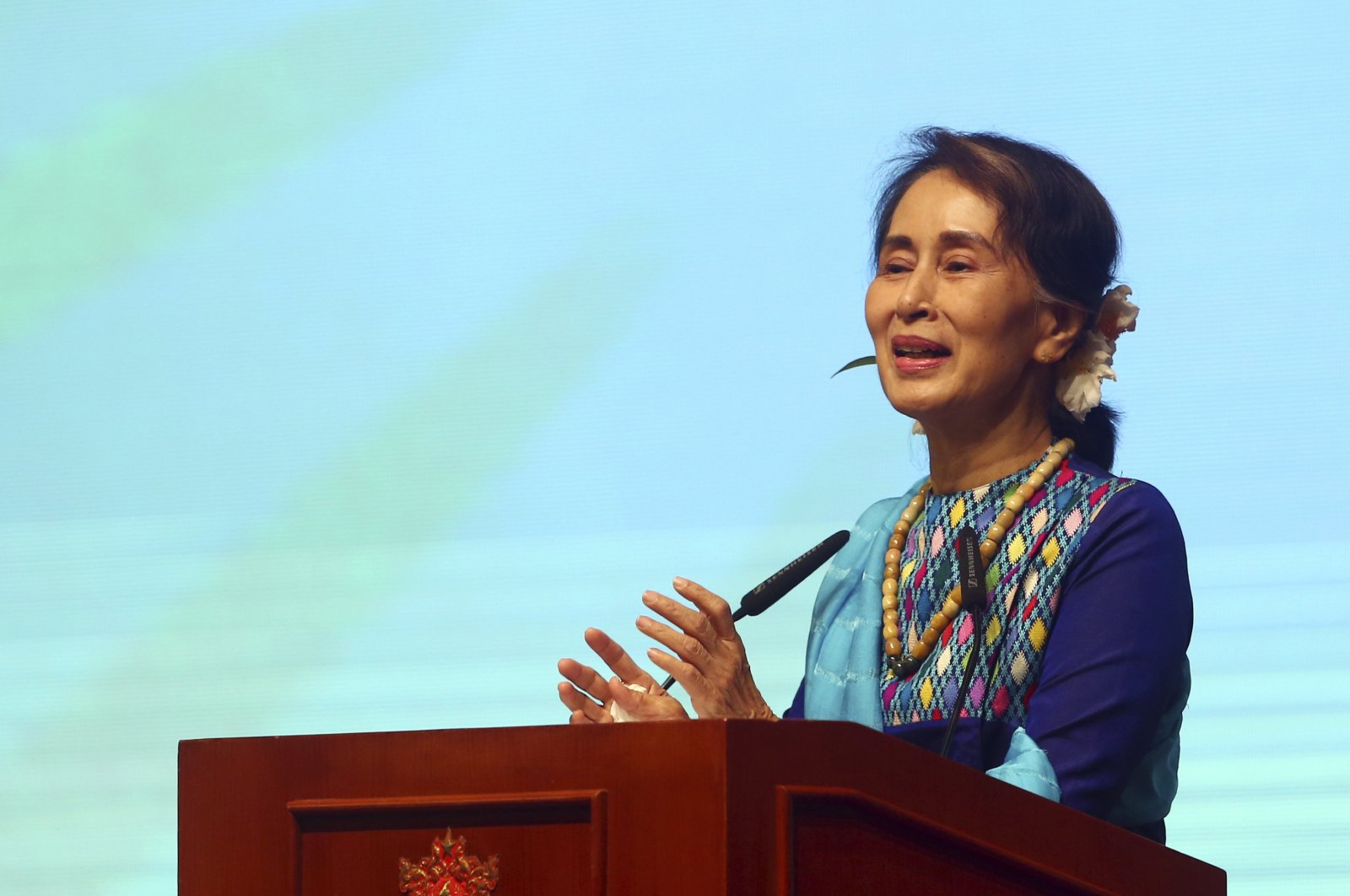 Myanmar's Leader Aung San Suu Kyi smiles as she delivers a speech during the meeting with the country's business leaders at the Myanmar International Convention Center in Naypyitaw, Myanmar, Monday, Aug. 27, 2018. (AP Photo)
by Agencies May 24, 2021 10:40 am
RECOMMENDED

Myanmar's deposed leader Aung San Suu Kyi appeared in court in person at a hearing on Monday for the first time since her government was overthrown by the military in a Feb. 1 coup, her lawyer told Reuters.

Suu Kyi looked in good health and held a face-to-face meeting with her legal team for about 30 minutes before the hearing, lawyer Thae Maung Maung said. Suu Kyi, 75, who won the Nobel Peace Prize in 1991 for her efforts to build democracy, is among more than 4,000 people detained since the coup. She faces charges that range from illegally possessing walkie-talkie radios to violating a state secrets law.

The ousted leader "wished people good health" in her meeting with her lawyers and also made an apparent reference to her National League for Democracy party that could be dissolved soon.

"She said the party was established for the people so the party will be there as long as the people are," Thae Maung Maung told Reuters.

Suu Kyi had faced weeks of delays to her legal case and her lawyers had struggled to gain access to their client. The next hearing was set for June 7, Min Min Soe said, adding she had also met with former president Win Myint, who was ousted and detained along with Suu Kyi.

The army seized power claiming fraud in an election won by Suu Kyi's party in November. Its accusations had been dismissed by the former electoral commission.

In his first interview with foreign media since the coup, junta leader Min Aung Hlaing had also said Suu Kyi was in good health as he disputed the number of people killed by security forces in protests since the coup. Asked about Suu Kyi's political achievements, the military leader said: "In short, she has done everything she can."

A group of ousted lawmakers – many of them previously part of the NLD – have formed a shadow "National Unity Government" in an attempt to undermine the junta. The military has declared the group would be classified as "terrorists."

The continuing violence has pushed some in the anti-junta movement to form a so-called "People's Defence Force" (PDF) in their own townships – made up of civilians who fight back against security forces with homemade weapons.

The military used tanks, mortars and helicopters in fighting which continued into Sunday night, according to a senior KNPP leader, as reported by Agence France-Presse (AFP). Four people taking refuge in a church were killed in army shelling, according to media and a spokesperson for a local group coordinating evacuations from the area.

Myanmar has been in chaos since the army took power, with daily protests, marches and strikes nationwide against the junta, which has responded with lethal force, killing more than 800 people, according to the Assistance Association for Political Prisoners (AAPP) activist group.

Min Aung Hlaing in a May 20 interview said the actual casualty figure was about 300 and that 47 police had also been killed.