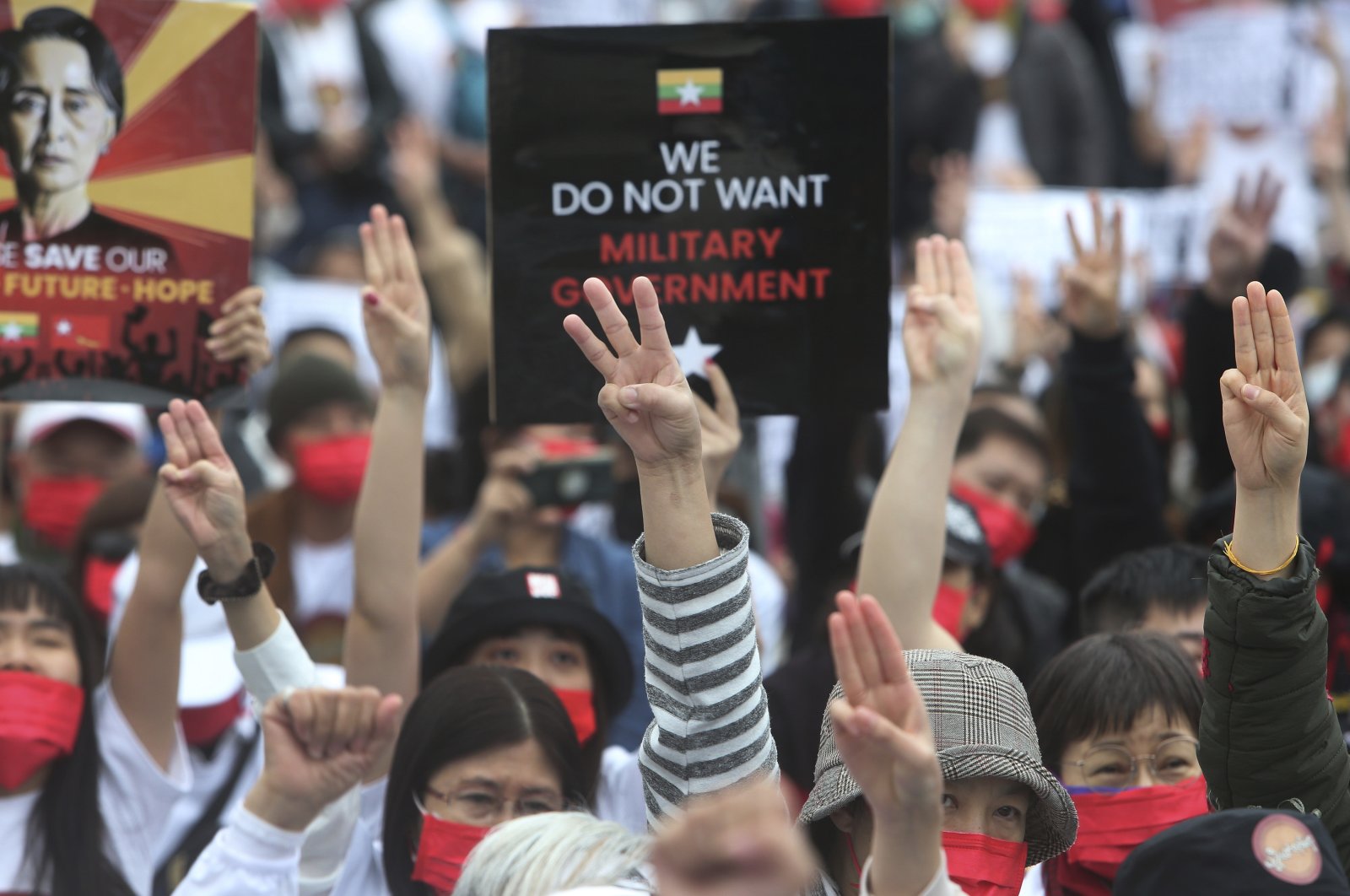 Myanmar nationals living in Taiwan make the three-finger salute of resistance as they attend a protest against the military regime in Myanmar at Liberty Square in Taipei, Taiwan, March 21, 2021. (AP Photo)
by French Press Agency - AFP Mar 25, 2021 5:26 pm
RECOMMENDED

The world's response to the Myanmar crisis has been too sluggish and far from tough enough to prevent further deterioration, the United Nations expert on rights in the country said Thursday, as Britain and the United States announced sanctions against military-owned conglomerate Myanmar Economic Holdings Ltd (MEHL) as part of "further measures" targeting the junta.

Tom Andrews, the United Nations special rapporteur on human rights in Myanmar, called for an emergency summit to sharpen the response and said it should include the southeast Asian country's neighbors and global powers, reported Agence France-Presse (AFP).

Myanmar's military has unleashed a deadly wave of violence as it struggles to quell nationwide protests against the Feb. 1, ousting of the civilian government and arrest of leaders including Aung San Suu Kyi.

"Conditions in Myanmar are deteriorating but they will likely get much worse without an immediate, robust, international response in support of those under siege," Andrews said in a statement.

"The limited sanctions imposed by member states do not cut the junta's access to revenue that help sustain its illegal activities, and the slow pace of diplomacy is out of step with the scale of the crisis,” he said.

"The incremental approach to sanctions has left the most lucrative business assets of the junta unscathed. It needs to be replaced by robust action that includes a diplomatic offensive designed to meet the moment."

Meanwhile, almost in response, the United Kingdom declared new sanctions on the junta. "Today's sanctions target the military's financial interests to help drain the sources of finance for their campaigns of repression against civilians," British Foreign Secretary Dominic Raab said in a statement.

The Myanmar military "controls significant segments of the country's economy through these holding firms," said a treasury department statement.

The companies dominate many key sectors of the economy, including trading, natural resources, alcohol, cigarettes and consumer goods.

"These sanctions specifically target the economic resources of Burma's military regime, which is responsible for the overthrow of Burma's democratically elected government and the ongoing repression of the Burmese people," said the U.S. "These sanctions are not directed at the people of Burma."

Britain said the designation came in response to evidence that the MEHL contributed funds to support the country's armed forces "in their campaign on ethnic cleansing against the Rohingya in 2017."

The new sanctions follow last month's designation of nine members from Myanmar's ruling military junta who Britain said were directly responsible for human rights violations committed by the police and military during the recent coup.

Still Andrews, who does not speak for the U.N. but is mandated to report his findings to the global body, called for the emergency summit to involve among others the Committee for Representing Pyidaungsu Hluttaw (CRPH), a group of ousted parliamentarians working underground against the junta.

Without a focused diplomatic solution, he said he feared the situation would further deteriorate with more murders, enforced disappearances and torture.

A combination of domestic peaceful resistance, sustained pressure and international diplomatic momentum would save lives and have a far greater chance of success than taking up arms, the American said.

"I fear that the international community has only a short time remaining to act," Andrews said.

Security forces opened fire on Thursday on anti-coup protesters in the eastern Karen state in the latest flare-up, as demonstrators took to the streets in nationwide dawn rallies.

Protesters have continued calling for the military to step down, defying night-time curfews to stage candlelit vigils for the dead, and taking to the streets early in dawn marches to avoid security forces.