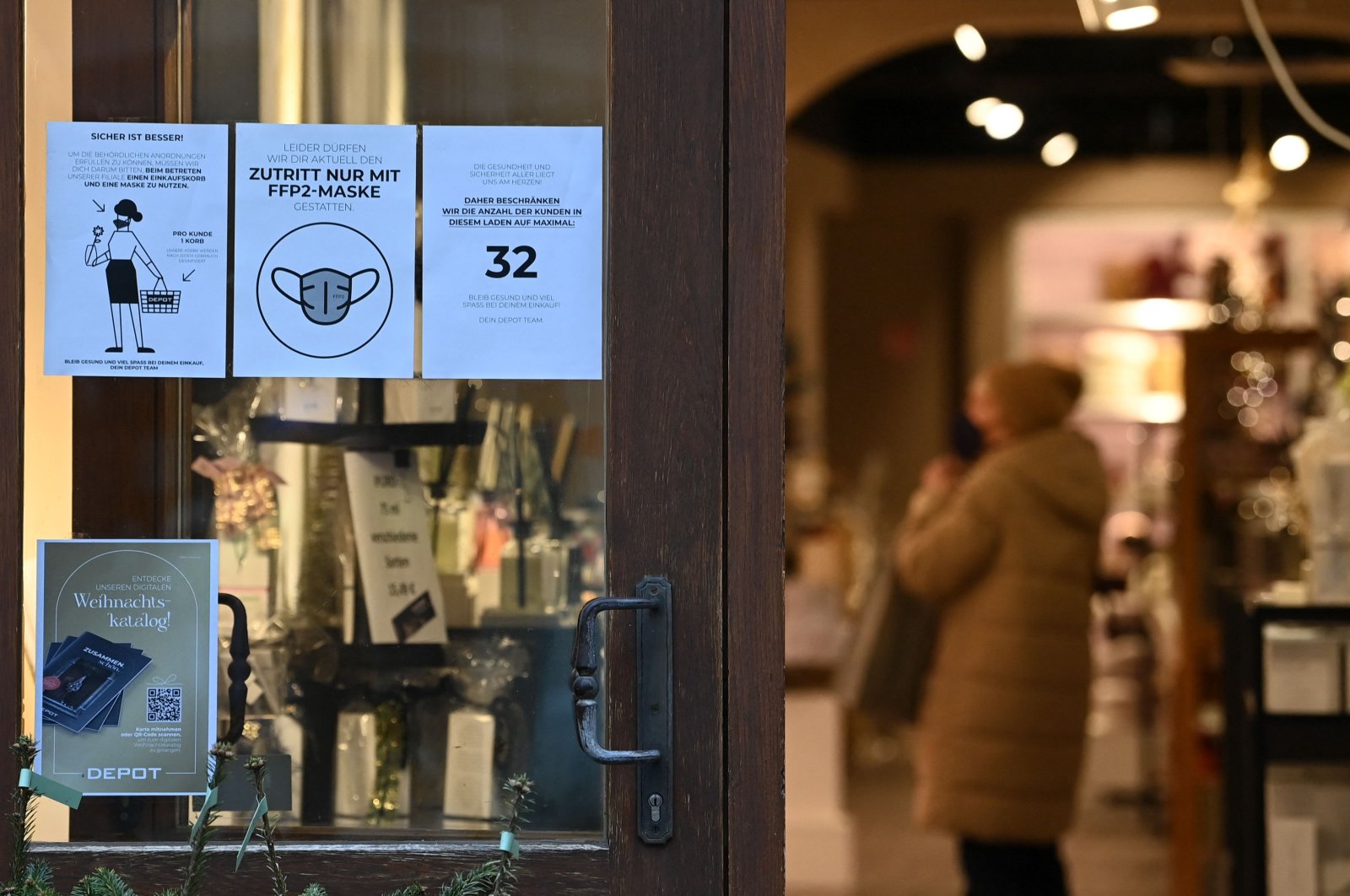 Amid the ongoing COVID-19 pandemic, information posters are seen at the entrance of a store in Muehldorf am Inn, southern Germany, Nov. 24, 2021 (AFP Photo)
by French Press Agency - AFP Nov 24, 2021 5:34 pm
RECOMMENDED

The European Union health agency urged its member countires on Wednesday to "urgently" introduce measures to counter surging COVID-19 cases, a day after the World Health Organization Regional Office for Europe (WHO/Europe) warned that 700,000 more people may die on the continent this winter.

With more than 2.5 million cases and almost 30,000 deaths reported in the past week, Europe is by far worst hit by the virus, according to Agence France-Presse (AFP). The trend is increasing, especially in countries with the lowest vaccination rates.

Europe's return to the pandemic's epicenter has been blamed on sluggish vaccine campaign in some nations, the highly contagious Delta variant, colder weather pushing people indoors again and the easing of restrictions.

In addition, evidence is growing that vaccine-induced protection against infection and mild disease is waning, prompting calls for booster shots.

Some countries in Europe have already reintroduced strict measures while others are poised to do so, sparking protests from people wary of having their lives restricted over the past year and a half.

On Tuesday, WHO/Europe warned that up to 700,000 more people could die from COVID-19 by March 2022 in Europe and Central Asia, in addition to the 1.5 million who have already succumbed to the virus.

The WHO said it expected "high or extreme stress" in intensive care units (ICUs) this winter in 49 out of the 53 countries that comprise its European region.

The European Centre for Disease Prevention and Control (ECDC) on Wednesday said its modeling predicted an equally grim outcome unless measures were taken "urgently."

"The potential burden of disease in the EU/EEA (European Economic Area) from the Delta variant will be very high in December and January unless public health measures are applied now in combination with continued efforts to increase vaccine uptake in the total population," it said in a statement.

Under 70% of the overall population in the EU and EEA (Norway, Liechtenstein and Iceland) have been fully vaccinated.

"This leaves a large vaccination gap that cannot be bridged rapidly and gives ample room for the virus to spread," the ECDC said.

Overall, 67.7% of the EU population is fully vaccinated, but vaccination levels vary widely between countries.

Only 24.2% of Bulgarians are fully vaccinated compared to 86.7% in Portugal.

Ammon recommended COVID booster shots for all adults over the age of 18, "with a priority for people above 40 years old."

EU chief Ursula von der Leyen on Wednesday echoed that call, tweeting that "boosters should be available for adults, with priority for people over 40 and vulnerable people."

Sweden, which has already offered boosters to those over the age of 65, meanwhile announced it would soon be making them available to those aged 18 to 64.

It will start with those in the age group 50 to 64, Health Minister Lena Hallengren told reporters.

Meanwhile, Central and Eastern Europe are currently witnessing the highest number of deaths due to low vaccination rates.

In Russia, doctors on Wednesday invited celebrities and politicians with anti-vaccine views to visit COVID red zones in hospitals and see for themselves the dramatic effects of the pandemic.

"We are all somewhat busy; you can probably guess with what," said the letter. Signatories included prominent Moscow doctor Denis Protsenko, who is in charge of the capital's main COVID hospital.

Despite multiple pleas from President Vladimir Putin, only 37% of Russians are fully vaccinated and the country has seen more than 1,000 deaths a day in recent weeks.