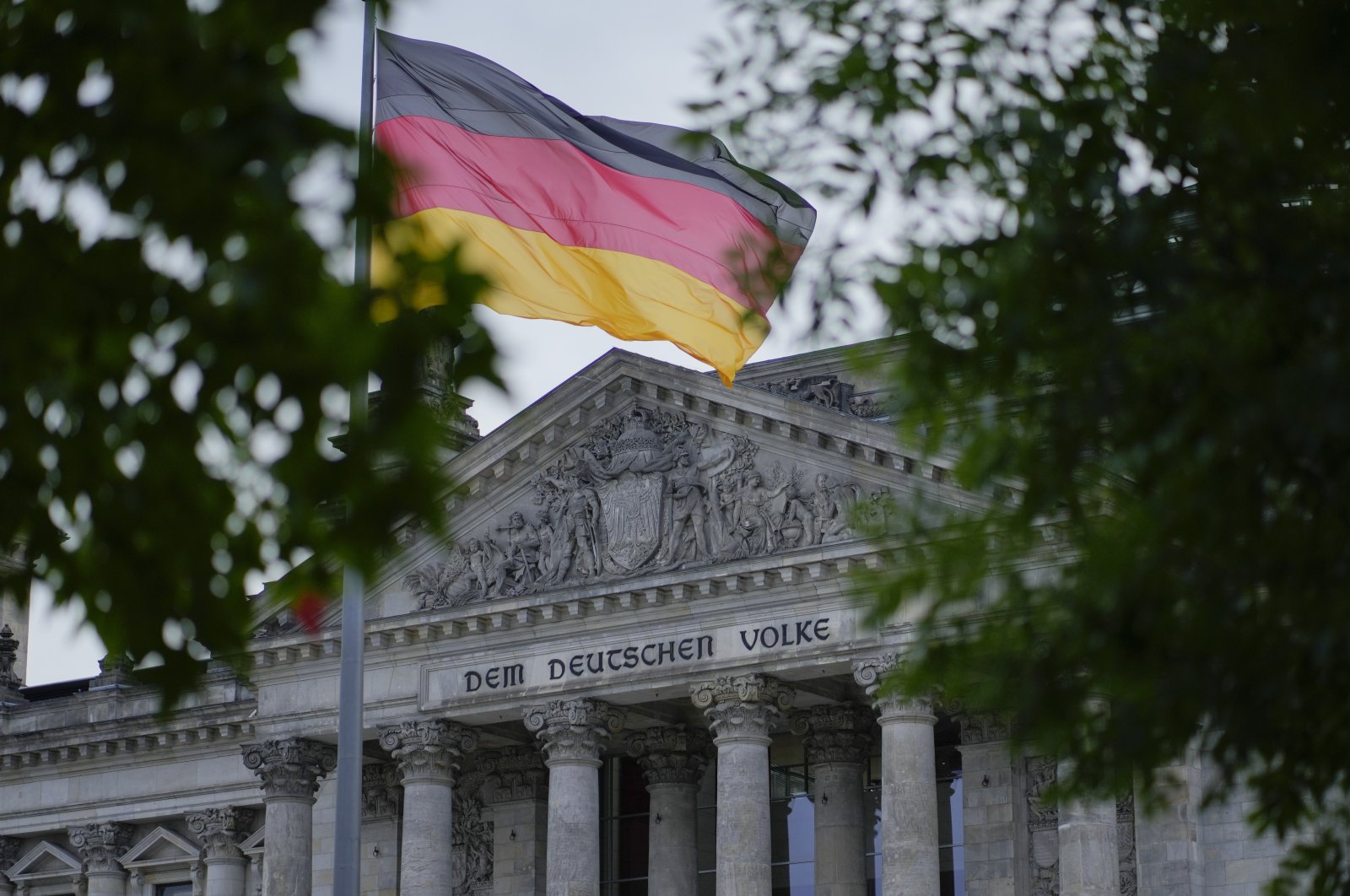 Germany heads for weeks, if not months, of protracted coalition bidding as Chancellor Angela Merkel's CDU/CSU insisted on trying to form government even after losing a tough race to the Social Democrats

Germany's newly elected lawmakers held their first meetings on Tuesday as their parties digest the fallout of the election that reduced outgoing Chancellor Angela Merkel's bloc to its worst-ever result and started the process of putting together a new government.

The narrow winners of Sunday's parliamentary election, the center-left Social Democrats (SPD) of Olaf Scholz, underlined their hopes of a quick start to talks with the likely kingmakers in a new government. And several prominent figures in Merkel's Christian Democrats (CDU) and its Bavaria-only sister party, the Christian Social Union (CSU) bloc questioned an initial push by election loser Armin Laschet to lead a new administration.

Since neither of the traditional big parties wants to renew their outgoing "grand coalition” of rivals, the third- and fourth-placed parties – the environmentalist Greens and the business-friendly Free Democrats (FDP) – appear to hold the keys to a parliamentary majority. Leaders of those parties plan to meet each other this week to search for the common ground before entertaining advances from potential suitors.

"The Greens and Free Democrats have been invited by us to hold exploratory talks with us this week already if they want,” Social Democratic parliamentary group leader Rolf Muetzenich said before a gathering of his party's newly elected and outgoing lawmakers.

“Our clear goal was to send the CDU and CSU to the opposition benches,” SPD co-leader Saskia Esken told reporters. “That seems to have succeeded. That is still our most important goal.”

Scholz, the outgoing vice-chancellor, said Monday that he wants a new government before Christmas if possible. Forming a government can take weeks or months in Germany as parties thrash out in detail the new coalition's plans.

Laschet's Union bloc also is holding a meeting of its lawmakers later Tuesday, with recriminations likely after a disastrous campaign. After saying Sunday night that it would do "everything we can" to form a new administration, Laschet made clear Monday that he still hopes to lead one - but sounded more reserved, arguing that voters gave no party a mandate.

The head of the Union's youth wing, Tilman Kuban argued that the mandate to form a government lies with the Social Democrats, Greens and Free Democrats. The full 735-member new Bundestag, or lower house of parliament, is expected to hold its first meeting next month.

The critical voice on Laschet has been growing following Sunday's election with support for his chancellor bid plunging. As CDU/CSU conservative bloc fell to a record low of 24.1% in the Bundestag elections, while SPD captured 25.7%, several influential voices in his party arguing that the elections did not give him the strongest mandate. "We lost the election, period," Kuban said.

"We cannot claim the responsibility for forming a government," veteran Hesse state premier Volker Bouffier asserted. The regional CDU boss in Lower Saxony, Bernd Althusmann, said the wish of the voters had to be respected. "A change was wanted," he said.

Across the country, it seems Laschet would struggle to sell a coalition led by himself to the public. Three recent surveys indicated that most Germans do not want Laschet to try to form a government.

Seventy-one percent of Germans see it as clearly or at least somewhat wrong for Laschet to claim the chancellorship, according to the Civey Institute survey carried out on behalf of the Augsburger Allgemeine newspaper on Tuesday. Some 22% of around 5,000 respondents were in favor of Laschet's plans.

Among supporters of the CDU/CSU conservative bloc, 55% back Laschet in the fight to succeed Merkel, while 32% think it is wrong for Laschet to lead the next government.

An Insa poll in Tuesday's Bild newspaper that asked whether Laschet should stay on as leader of the CDU returned 21% with yes and 51% with no, with the rest saying they didn't care or didn't know. Only 13% wanted Laschet as chancellor.

A third poll, by infratest dimap for broadcaster ARD, indicated that a majority of 55% of the public would support a three-way coalition of Scholz's SPD with the Greens and the pro-business Free Democrats.

As Europe's economic powerhouse Germany embarks on the task of piecing together a new ruling coalition, observers need only look to its neighbors, Belgium and the Netherlands, to see how tricky the process can be.

Dutch political leaders resumed meetings this week – again – in a bid to find a constellation of parties willing to rule the country for the next four years. They've been at it – on and off – for more than six months now and no end is in sight. Leaders of the largest parties have failed to cobble together a coalition able to command a majority in the lower house of parliament and are now looking at forming a minority government. So far, no possible coalition has gained enough traction to even merit moving to the next phase of negotiations, hammering out a policy blueprint for the next four years.

Sigrid Kaag, leader of the centrist D66 that won enough seats in the election to become the second-largest party in parliament behind Prime Minister Mark Rutte's conservative VVD, said Sunday: "I don't have a magic wand.” Even so, she attempted to breathe new life into the negotiations by saying she is prepared to sit down for talks with six parties, including the faith-based Christian Union. Her party had previously ruled out a coalition with the Christian Union because of their opposing stances on issues including euthanasia and assisted suicide. "Conventional wisdom in negotiations is that you should never be the first to move. The famous saying: don't blink first,” Kaag said in a speech Sunday. "But I'm going to do it.” Whether it leads to a breakthrough remains to be seen.

If the Dutch look like they're dragging their heels, just across the border, Belgium, with its linguistic and regional divides, has perhaps Europe’s most unenviable post-electoral record. Prime Minister Alexander De Croo’s government was formed on Oct. 1, 2020, ending almost 500 days of talks, caretaker cabinets and a minority coalition rubber stamped to see the country through the start of the COVID-19 pandemic. But even that marathon process fell short of the Belgian record that was set in December 2011, when a government was finally cobbled together after 541 days of negotiations.

The low countries are not the only nations that have wrestled with piecing together a coalition from a splintered and polarized political landscape.

Throughout Israel’s 73-year history, no single party has ever controlled the parliamentary majority. That has resulted in a string of coalition governments, usually led by the largest party in parliament. In some cases, coalitions are comprised of partners with similar ideologies on key issues like relations with the Palestinians. But many times, rivals must make concessions and reach compromises in order to work together. Israel’s current government, however, is unlike anything seen before. Formed after four inconclusive elections in two years, it includes eight parties spanning the spectrum of Israeli politics, from far-right parties that oppose Palestinian statehood to dovish parties that support a two-state solution with the Palestinians and, for the first time in Israeli history, an Arab party.

Naftali Bennett, leader of a small hard-line religious party, is the current prime minister, but in two years, he has agreed to swap places with Foreign Minister Yair Lapid, head of a larger secular, centrist party.

Germany may have fewer parties at the negotiating table, but with the Social Democrats only narrowly beating Merkel’s center-right bloc on Sunday, the leaders of both are laying claim to leading the next government.

This much is clear: Whether Scholz or Laschet succeeds the veteran German Chancellor, they will likely have to enlist the support of the environmentalist Greens and the business-friendly FDP – parties that traditionally belong to rival ideological camps.

The Netherlands and Belgium, with their history of post-election coalition building, have found ways of running their countries without a fully functioning government.

In The Hague, Rutte's outgoing four-party administration has been in caretaker mode since the March 17 election, taking only essential decisions and making no major policy changes beyond what has been necessary to battle the COVID-19 pandemic. The same is true for Germany, where Merkel's government will remain in office while talks continue to forge a new coalition, and that could take some time. After all, the previous German election was on Sept. 24, 2017, but it was March 14, 2018, before the Bundestag elected Merkel for her fourth term.