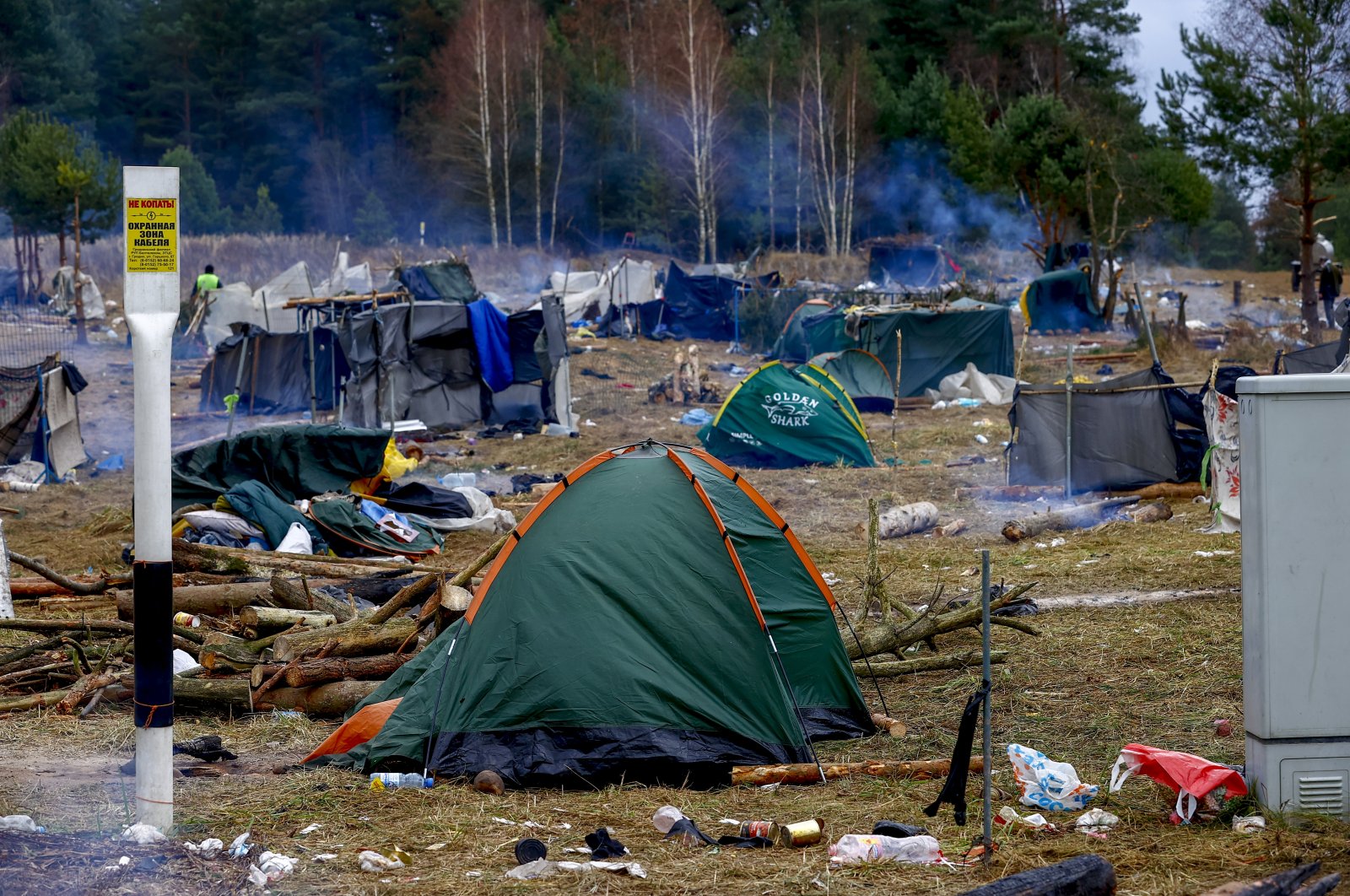 A makeshift migrant camp on Belarus' border with Poland has been cleared, Minsk said Thursday, as hundreds of Iraqis returned home after abandoning their hopes of reaching the European Union – repatriation that came after tensions at the Polish eastern crossing, where thousands of migrants had become stuck in a cold and soggy forest.

Around 2,000 people, mainly Iraqi Kurds, had been stuck in freezing temperatures at a camp in the woods near Brouzgui crossing point, hoping to pass into EU member state Poland. But on Thursday the Belarusian border force announced that the camp had been cleared, with its occupants relocated "on a voluntary basis" to a reception center nearby where they were given hot food and warm clothes.

Pictures of the camp looking abandoned were released and Polish authorities confirmed it had been emptied. The Polish spokesperson added a word of caution, saying "there were groups appearing in other places trying to cross the border. We'll see what happens in the next hours." In recent weeks, migrants have tried, mostly at night, to cross the frontier, sometimes clashing with Polish troops.

The relocation came the same day as the first repatriation flight from Belarus, carrying 431 people, landed in Iraq.

"The situation was very bad, we had to eat grass and leaves from the trees, and it was cold," one returning resident of Arbil told Agence France-Presse (AFP). In another sign of the grim conditions at the border, a Polish nongovernmental organization (NGO) said it had found a Syrian couple who had lost their 1-year-old child while sleeping in the forest on the border for a month.

"We were hostages – victims stuck between Belarus and the European Union,” said a young Iraqi returnee in a black hoodie after his flight arrived in Baghdad. "Belarus police are the same as Daesh,” he said, referring to the brutal militants from the Daesh terrorist group that rampaged through Iraq several years ago. He then walked away.

Ali Kadhim, who is returning to his home in Basra, said he wanted to go to Europe because in Iraq there are "no jobs and the situation is very bad recently.” He said he had reached a deal with a smuggler to get him to the Belarus-Poland border zone, where a Belarusian border guard took his passport and cellphone and prevented him from leaving the forest. For three days, he had no food, water or internet service, he said.

"I was living on what I found on ground. I mean I had to live on three dates in a whole day,” Kadhim said.

The European Commission and Germany rejected a proposal from Belarus that EU countries take in 2,000 of the migrants currently in its territory, and the United States accused Minsk of making migrants "pawns in its efforts to be disruptive," signaling tensions with the West were far from over. In any case, Belarus' step to move the migrants to a giant warehouse where hundreds, including young children, could be seen resting on mattresses, meant they were no longer outdoors in freezing temperatures.

One Iraqi, Zain Shad, said they were being moved further, to another holding center.

"We are moving to there because the weather's pretty damn cold. The people are all sick because of the rain yesterday and they are all freezing, and we're now moving on to the camps," he told Reuters.

The EU accuses Belarus of engineering the situation at the border in retaliation for sanctions on the ex-Soviet country. Minsk and its main ally Russia have rejected the charges and criticized the EU for not taking in the migrants seeking to cross over.

The flight carrying Iraqis came a day after the second of German Chancellor Angela Merkel and Belarusian President Alexander Lukashenko's calls – the first time the Belarus leader has spoken with a Western leader since disputed presidential elections last year. On Thursday, Lukashenko's spokesperson Natalya Eismont said that there were about 7,000 migrants in the country, including those at the border.

She said Belarus would take responsibility for sending 5,000 of the migrants home if they want to go, and alleged Merkel would negotiate with the EU on creating a humanitarian corridor to Germany. But Berlin denied any agreement with Lukashenko on the possibility of such a corridor, saying it "stood by" its neighbor Poland. German Interior Minister Horst Seehofer rejected the proposal and talked of misinformation.

"If we took in refugees, if we bowed to the pressure and said 'we are taking refugees into European countries,' then this would mean implementing the very basis of this perfidious strategy," Seehofer said in Warsaw.

A government source added that Germany had not agreed to any deal, stressing that this was a European problem.

Poland's Prime Minister Mateusz Morawiecki had earlier cautioned against holding direct talks with Minsk, saying it would legitimize Lukashenko's regime. The Polish government has also warned against any agreement on the crisis that might be struck "over our heads." Warsaw warned Minsk that if the crisis was not resolved by Sunday, it would halt rail traffic with Belarus.

The EU and the United States also issued fresh warnings on Thursday. The EU and foreign ministers of the G-7 global powers called on Lukashenko's regime "to cease immediately its aggressive and exploitative campaign."

U.S. Secretary of State Antony Blinken told reporters on a visit to Nigeria that the U.S. could add to sanctions already imposed on the country.

"This effort to weaponize migration has to stop," he said. "First and foremost, it is doing a terrible injustice to these people that it has victimized by making them pawns."

The Polish border guard said Thursday that 200 migrants were detained after entering the country illegally, part of a group of around 500 who had attempted the crossing. The defense ministry alleged Belarusian special forces had led the attempt, saying they had first carried out reconnaissance and "most likely" damaged the barbed wire fence along the border.

"Then the Belarusians forced the migrants to throw stones at Polish soldiers to distract them. The attempt to cross the border took place several hundred meters away," it said, adding that a family of five people, including three children aged between 7 and 9, had been injured in the incident and were taken to hospital. Polish media say at least 12 migrants have died since the crisis began in August.

The president of the European Parliament, David Sassoli, called for "the inhumanity" to stop.

"It is heartbreaking seeing a child die in the cold at the EU's doorstep," he said on Twitter.

Lithuania's President Gitanas Nauseda said the tough stance taken by the EU against Belarusian authorities was paying off.

"We are seeing the first results – the flights organized by the regime from the Middle East are being stopped, and migrants in Belarus are returning home," he said after speaking with his Polish counterpart.

French President Emmanuel Macron said Europe must keep up the pressure on Lukashenko, but also ensure that those who were not eligible for asylum were flown back home.

Belarusian state airline Belavia has meanwhile stopped allowing citizens from Afghanistan, Iraq, Lebanon, Libya, Syria and Yemen to board flights from Uzbekistan's capital Tashkent to Minsk, Belta reported. Russian President Vladimir Putin also slammed the EU on Thursday, asserting that "Western countries are using the migration crisis on the Belarusian-Polish border as a new reason for tension in the region that is close to us, for pressure on Minsk, and at the same time they forget their own obligations in the humanitarian sphere."

The turmoil between the EU and Belarus began after the disputed presidential elections in August 2020, in which Lukashenko appeared to be the winner despite widespread accusations of fraud and irregularities. While Lukashenko denied all the allegations, mass demonstrations broke out in the country. Thousands of protesters claimed the elections were fraudulent and called on Belarusian authorities to repeat the vote. Refusing to do so, Minsk has launched a major crackdown on opposition leaders leading to conflict with the international community, who called on Lukashenko to halt arbitrary detentions of demonstrators and stop beatings and other aristocracies in Belarusian prisons.

Following the outcry, the EU and the U.S. imposed a spate of sanctions on Belarusian authorities responsible for the detentions of activists, critics and opponents. Lukashenko threatened with retaliation and warned European leaders that he would let an influx of migrants into the continent if restrictions were not lifted.