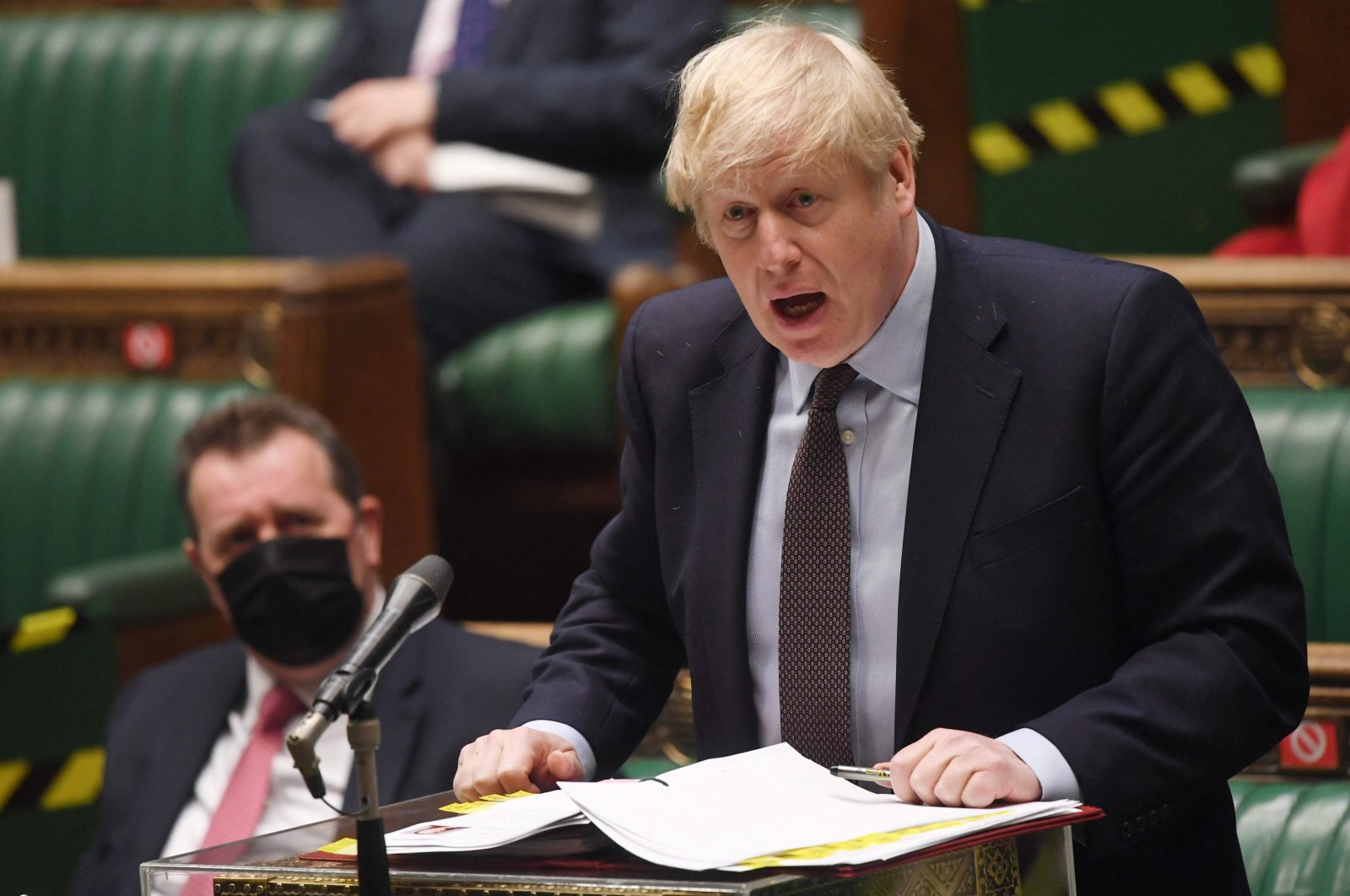 Boris Johnson's former top adviser Dominic Cummings confirmed Wednesday that he had heard the prime minister say "let the bodies pile high" when discussing whether he should lock down Britain again late last year - making it one of the many criticisms that the former adviser has against Johnson.

Cummings accused the government of failing Britain in its response to the coronavirus pandemic, apologizing to the families of the tens of thousands "who died unnecessarily."

After leaving Johnson's team late last year, Cummings has become one of his former boss's most vocal critics over how the prime minister led his team in the early days of the COVID-19 pandemic last year, describing it as "catastrophic."

Cummings, who was part of Johnson's senior team during that period, accused the government of moving too slowly to try to tackle the spread of COVID-19, the prime minister of changing his mind "10 times a day" and health officials of making ill-judged conclusions about the nature of the virus.

Johnson, in parliament, rejected the allegations saying: "I don't think anybody could credibly accuse this government of being complacent about the threat that this virus posed, at any point. We have worked flat out to minimize loss of life."

His spokesperson said the government would not be engaging with every accusation made by Cummings.

Following are the main charges Cummings made against Johnson's government to a parliamentary committee.

"What happened is fundamentally the prime minister and I did not agree about (COVID-19)."

Cummings accused Johnson's government of failing the public by reacting too slowly to the spread of the coronavirus, leading to unnecessary deaths.

"The truth is that senior ministers, senior officials, senior advisers like me, fell disastrously short of the standards that the public has a right to expect of its government in a crisis like this," he said. "And I'd like to say to all the families of those who died, unnecessarily, how sorry I am for the mistakes that were made and for my own mistakes."

"Number 10 was not operating on a war footing in February on (COVID-19) in any way shape or form. Lots of key people were literally skiing in the middle of February. It wasn't until the last week of February that there was really any sort of sense of urgency I would say ... in terms of Number 10 and cabinet."

On March 12, Cummings said the situation in Downing Street was "almost surreal," describing Johnson's fiancee's anger about a newspaper article about their dog as competing for attention with planning to tackle the pandemic.

He said Johnson was told on March 14, 2020, he needed to implement a lockdown, but the government did not have a plan.

"On the 14th we said to the prime minister: 'You are going to have to lockdown' – but there is no lockdown plan, it doesn't exist," Cummings said.

He quoted Helen MacNamara, former deputy cabinet secretary, as saying, "We are absolutely fucked ... I think we're going to kill thousands of people."

Johnson announced a lockdown on March 23.

Asked by opposition Labour leader Keir Starmer whether he accepted Cummings' central allegations and that his inaction led to needless deaths, Johnson said, "No."

"The basic thought was that in February the prime minister regarded this as just a scare story ... he described it as the new swine flu," Cummings said.

"The view of various officials inside Number 10 was if we have the prime minister chairing COBR (civil contingencies committee) meetings and he just tells everyone it's swine flu, don't worry about it, and I'm going to get (Britain's Chief Medical Officer) Chris Whitty to inject me live on TV with coronavirus ... that would ... not help."

Cummings accused the health ministry of believing that so-called herd immunity was inevitable because if the government moved to try to suppress the spread of the coronavirus during the summer of last year, it would only rear its head again in the winter putting the health service under strain.

So, in March last year the government was aiming to establish "herd immunity" where the virus spreads through the population to increase overall resistance, by September, he said, adding no one thought it was a "good thing."

He also said the cabinet secretary called on the prime minister to go on television and explain herd immunity by describing it "like the old chickenpox parties."

The government has repeatedly said that "herd immunity has never been a policy aim or part of our coronavirus strategy."

Talking about Britain's political situation, Cummings said there were thousands of people who could offer better leadership than the two men who vied to run the country in a 2019 election – Johnson and former Labour leader Jeremy Corbyn.

"It's completely crackers that someone like me should have been there, just the same as it's crackers that Boris Johnson was in there," he told a parliamentary committee.

Cummings described the secrecy surrounding decisions made by a grouping of top scientific advisers to the government as a "catastrophic mistake."

"I think there's absolutely no doubt at all that the process by which (Scientific Advisory Group for Emergencies) SAGE (took decisions) was secret, and overall the whole thinking around the strategy was secret, was an absolutely catastrophic mistake because it meant there wasn't proper scrutiny," he said.

He said the process of deciding how to tackle the spread of coronavirus in the early days was "closed," describing it as a "group think bubble" that struggled to change course.

Cummings said Health Minister Matt Hancock should have been fired for "lying" in government meetings on COVID-19.

"I think that the secretary of state for health (Hancock), should have been fired for at least 15, 20 things including lying to everybody in multiple occasions in meeting after meeting in the cabinet room and publicly," Cummings said.

He listed occasions when he believed Hancock had lied, including when the health minister told Johnson and Cummings that the situation with PPE (personal protective equipment) was fine when it was not.

Cummings later said Johnson came close to removing Hancock from his post in April but did not.

People with COVID-19 were sent from hospitals to care homes for the elderly without being tested, making "complete nonsense" of claims they would be shielded.

"Hancock told us in the Cabinet Room that people were going to be tested before they went back to care homes," he said.

"We only subsequently found out that that hadn't happened. Now all the government rhetoric was we put a shield around care homes and blah blah, it's complete nonsense. Quite the opposite of putting a shield around them, we sent people with (COVID-19) back to the care homes."

Speaking about a decision to bring in a new lockdown late last year, Cummings said Johnson had ignored advice that he should do so quickly. "He was just making his own decision that he was going to ignore the advice."

He described Johnson as saying he should have been "the mayor from Jaws" who kept the beaches open despite shark attacks, after feeling he had been forced into the first lockdown and confirmed he had heard the prime minister saying he would rather "the bodies pile high" than another lockdown.

Cummings admitted his trip to northern England at the height of Britain's first coronavirus lockdown was a "major disaster" for the government's COVID-19 policy.

He apologized, saying, "That whole episode was definitely a major disaster for the government and the (COVID-19) policy."

Referring to his excursion to test his eyesight after contracting COVID-19 in a further breach of lockdown rules, he said, "I wish I'd never heard of Barnard Castle and I wish I'd never gone, and I wish the whole nightmare never happened."

Among all of this, Cummings said Johnson prioritized the economy over public health after April.

He also said the British government and Bank of England worried that bond markets could turn against them in early 2020 due to the sums being borrowed to finance the pandemic response.