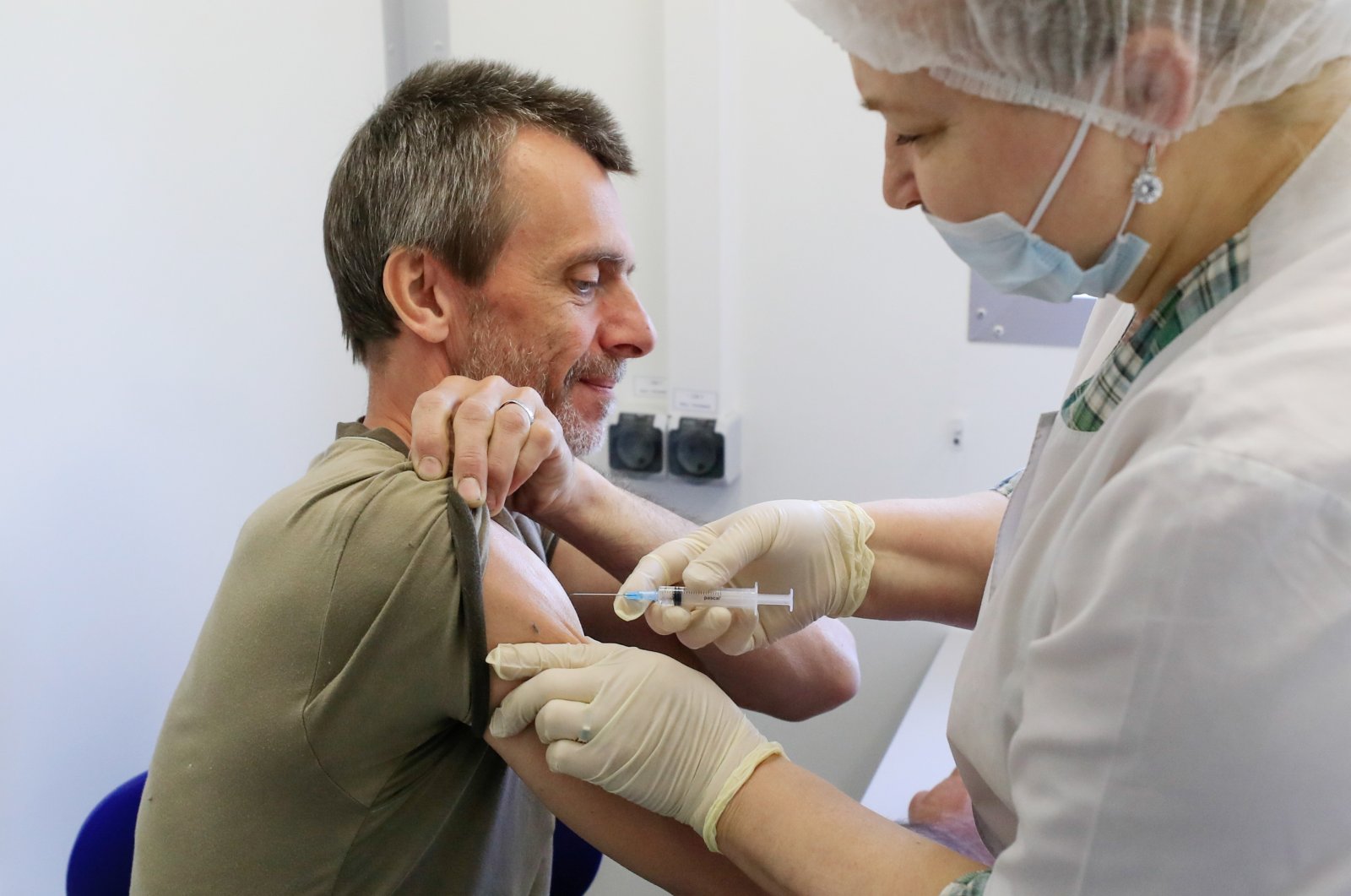 A man receives a dose of Sputnik V vaccine against the coronavirus at a mobile vaccination center in a dacha community near the village of Poyarkovo in Moscow Region, Russia, May 31, 2021. (Reuters Photo)
by French Press Agency - AFP Jun 16, 2021 2:30 pm
RECOMMENDED

Mandatory vaccinations were ordered by Moscow's mayor for service industry workers residing in the Russian capital, citing a "dramatic" rise in coronavirus infections.

The announcement by Sergei Sobyanin – one of the first compulsory vaccination orders for a major world city – was a stark admission from a senior Russian official that authorities are struggling to bring the pandemic under control.

Russia lifted most restrictions last year, and the country has pressed ahead with large in-person events, like a recent economic forum in Saint Petersburg and Euro 2020 hosting duties.

President Vladimir Putin has repeatedly signaled Russia was moving beyond the coronavirus and claimed his country – which has the sixth-highest caseload globally – handled the global outbreak better than most others.

"We simply must do everything to carry out mass vaccinations in the shortest possible time and stop this terrible disease, stop the deaths of thousands of people," Sobyanin wrote in a statement on his website.

Health officials in Moscow have in recent weeks reported a steady rise in the number of new COVID-19 cases, mirroring a trend across Russia.

That increase in cases comes as authorities struggle to encourage Russians to get vaccinated, even though the country launched a mass campaign of free jabs in December.

Sobyanin, whose city of some 12 million is the epicenter of the coronavirus outbreak in Russia, said just 1.8 million residents had been inoculated.

"The coronavirus situation continues to unfold dramatically," Sobyanin said, as authorities announced 5,782 new infections in the capital and 75 deaths.

"In connection with the extremely difficult epidemiological situation, the Chief State Sanitary Doctor for the city of Moscow today adopted a decree on the compulsory vaccination of workers in the service sector," he said.

Some 60% of all service industry workers in Moscow were ordered to be fully vaccinated by Aug. 15, including taxi drivers, staff of cultural venues and restaurant workers.

The directive from Sobyanin, who has taken a combative stance against the pandemic compared to other officials, came just weeks after Putin said the Kremlin would not order mandatory jabs.

The Russian leader in May described any non-optional vaccine rollout as "impractical and impossible to introduce," saying citizens themselves needed to understand there was a "fatal" danger in opting out.

That line was repeated Wednesday by the Kremlin's spokesperson, Dmitry Peskov, who said there was "no discussion" within the Russian leadership of announcing mandatory vaccinations nationwide.

But Putin has several times in recent months taken to state-run television channels to press upon Russians the urgency of getting vaccinated.

Recent polling shows that many Russians are unlikely to voluntarily get the jab, with one recent independent survey suggesting 60% do not intend to be vaccinated.

In an effort to boost turnout to public venues offering vaccines, Sobyanin last week announced that all Muscovites who get their first coronavirus jab would be automatically entered into a lottery to win a car.

Despite introducing a strict lockdown after the pandemic swept across Russia last spring, authorities lifted most restrictions by mid-summer in an effort to protect the struggling economy.

Russia started its mass vaccination campaign in December, with homegrown vaccine Sputnik V – touted by Putin as the best in the world.

Russia has since approved three more vaccines for public use: EpiVacCorona, CoviVac and the one-dose Sputnik Light.

Sputnik V has been approved in 67 countries, including ex-Soviet nations like Belarus and Armenia, allies like Venezuela and Iran, but also Argentina, Brazil, India and Pakistan.