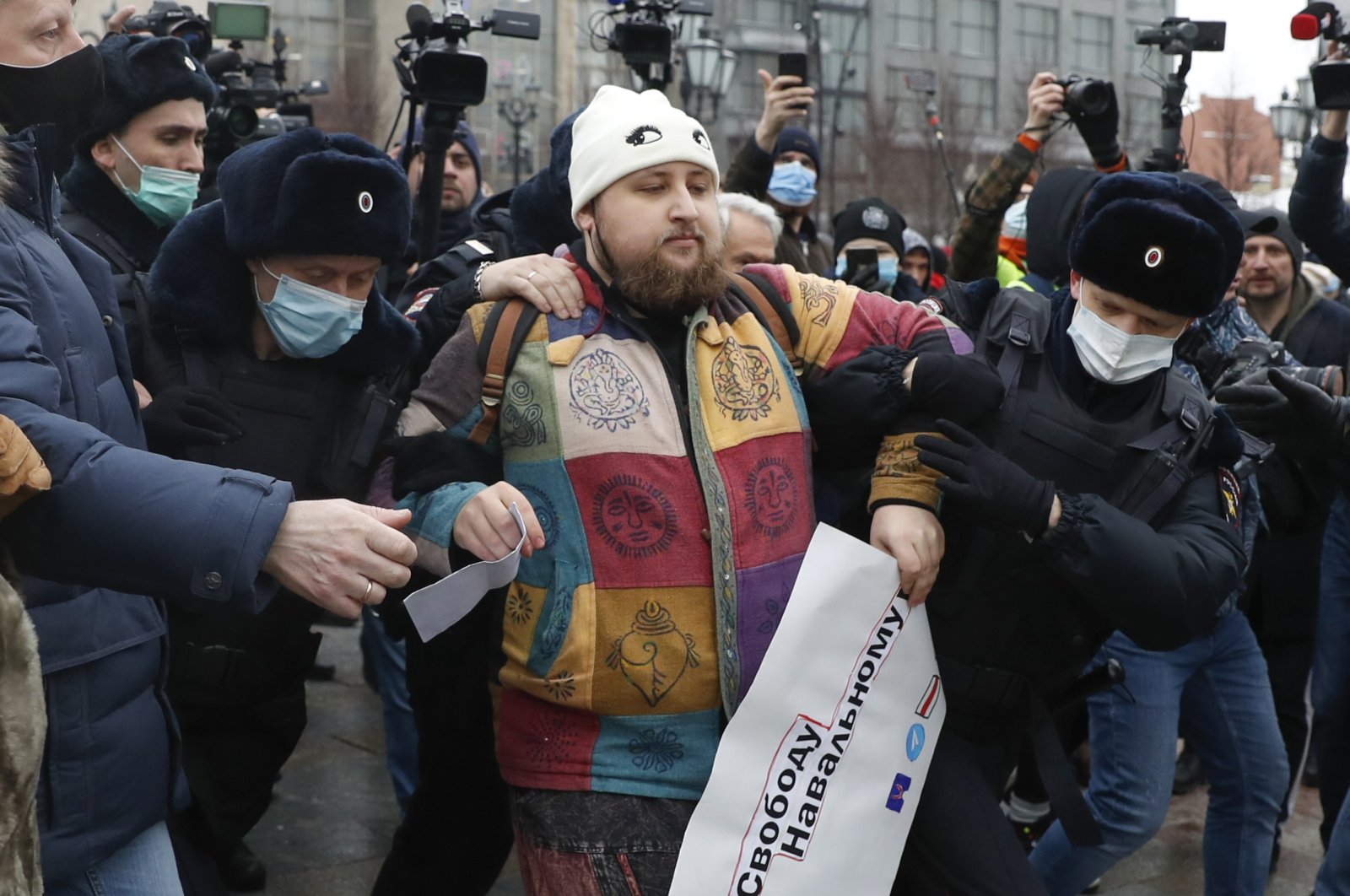 Russian police detained over 1,000 protesters across the country Saturday as thousands of supporters of jailed Kremlin critic Alexei Navalny took to the streets following his call to protest against President Vladimir Putin's rule.

Putin's most charismatic critic urged mass rallies after surviving a near-fatal poisoning with a Novichok nerve agent and returning to Moscow last weekend following months of treatment in Germany. He was arrested at Sheremetyevo Airport and jailed.

Saturday's rallies are expected to be a major test of the opposition's ability to mobilize despite increasing Kremlin pressure on critics and the coronavirus pandemic.

Ahead of the demonstrations, Navalny's team released an investigation into an opulent Black Sea property allegedly owned by Putin. Since its release, it has been viewed more than 65 million times.

In the Pacific port of Vladivostok, demonstrators gathered in the city center, chanting "Putin is a thief" and "Freedom to Navalny!"

Protests also took place in other cities in the Far East and Siberia including Khabarovsk, Novosibirsk and Chita, where several thousand turned out, Navalny supporters said.

In Yakutsk south of the Arctic Circle, protesters wrapped up against the cold rallied in temperatures of minus 50 degrees Celsius (minus 58 degrees Fahrenheit). In the city, police grabbed a protester by his arms and legs and dragged him into a van, video footage from the scene showed.

The OVD-Info protest monitor group said that at least 369 people, including 67 in the Siberian city of Novosibirsk, had been detained so far.

In central Moscow, police detained at least 100 people before the protest had even begun, bundling them into nearby vans. Around 1,000 people had gathered before the rally was due to start at 1100 GMT.

At least 40,000 people joined protests in Moscow on Saturday, Reuters witnesses estimated although the Interior Ministry put turnout in the protests at around 4,000 people, the TASS news agency reported.

Moscow police vowed a tough crackdown prior to the protests, with police saying unsanctioned public events would be "immediately suppressed."

Navalny, who is being held in Moscow's high-security Matrosskaya Tishina jail, thanked his supporters.

"I know perfectly well that there are lots of good people outside of my prison's walls and help will come," he said Friday.

Yulia Navalnaya, the wife of jailed Kremlin critic Alexei Navalny, said Saturday she was detained at the anti-government demonstration in Moscow called by her husband.

"Apologies for the poor quality. Very bad light in the police van," she wrote on Instagram with an accompanying photo, after thousands of Navalny supporters joined nationwide demonstrations against the Kremlin.

Lyubov Sobol, a close ally of jailed Kremlin critic Navalny was one of the arrested in the protests.

The Investigative Committee on Friday launched a criminal probe into the calls for unauthorized protests.

A hastily organized court on Monday jailed Navalny for 30 days, and his supporters fear that authorities are preparing to sentence him to a long prison term to silence him.

The "Putin's palace" report released by Navalny alleges the Russian leader owns a 17,691 square meter (190,424 square foot) mansion that sits on a property 39 times the size of Monaco and features a casino along with a theatre and a hookah lounge complete with a pole-dancing stage.

The Kremlin has denied the property belongs to Putin.

A number of public figures – including those who usually steer clear of politics – have spoken out in Navalny's support.

Many took to social media – including video-sharing app TikTok hugely popular with teens – to voice support and urge a large turnout Saturday.

A hashtag demanding freedom for Navalny was trending on TikTok and videos demanding Navalny's release garnered hundreds of millions of views.

The watchdog said on Friday that media platforms, including TikTok and YouTube, began removing content at its request.

Navalny, 44, rose to prominence a decade ago and has become the central figure of Russia's opposition movement, leading large-scale street protests against corruption and electoral fraud.

His arrest drew widespread Western condemnation, with the United States, the European Union, France and Canada calling for his release.