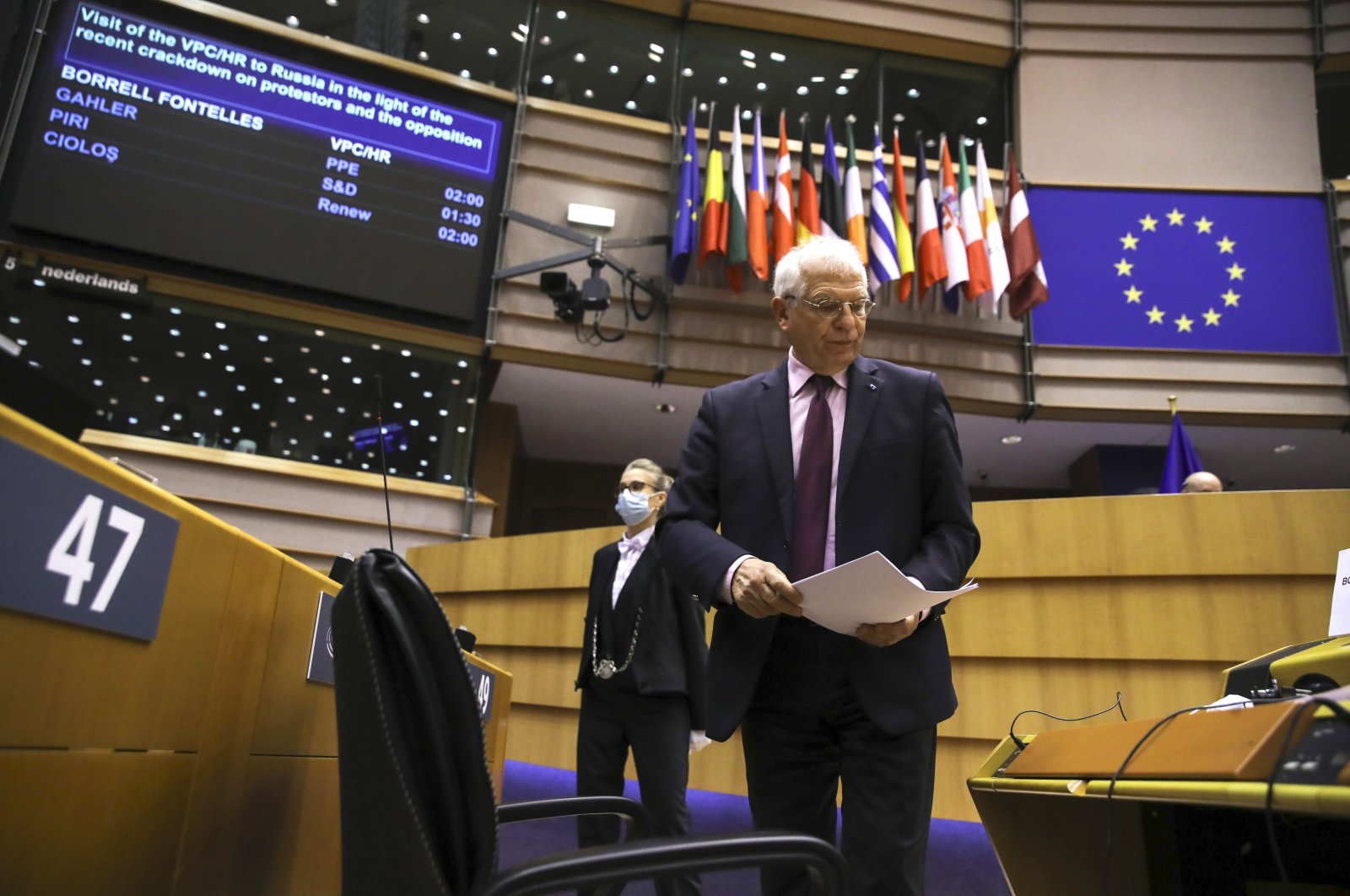 European Union foreign policy chief Josep Borrell arrives for a debate, regarding his recent trip to Russia, during a plenary session at the European Parliament in Brussels, Tuesday, Feb. 9, 2021. (Pool via AP)
by ASSOCIATED PRESS Feb 09, 2021 8:11 pm
RECOMMENDED

European Union foreign policy chief Josep Borrell said Tuesday that the 27-nation bloc must take a firm stance in its future relations with Russia including through the use of new sanctions, in the wake of the jailing of opposition leader Alexei Navalny.

Borrell said that he will table proposals for such action when he chairs the next meeting of the bloc’s foreign ministers on Feb. 22. EU countries are divided in their approach to Russia and no member state has yet tabled a demand for such measures.

“It will be for the member states to decide the next step, but yes, this could include sanctions. And I will put forward concrete proposals, using the right of initiative the high representative has,” Borrell told EU lawmakers.

“Containment efforts should include combining robust actions against disinformation, cyberattacks and other possible hybrid challenges,” he said.

Navalny, President Vladimir Putin’s most high-profile political foe, was arrested in January when he returned to Moscow after spending months in Germany recovering from poisoning in Russia with what experts say was the Soviet-era nerve agent Novichok.

The EU has imposed sanctions on those responsible for his poisoning, but Navalny has urged the Europeans to slap travel bans and asset freezes on several Russian oligarchs close to Putin. Borrell didn't elaborate on the details of his proposal.

Germany, Poland and Sweden on Monday each declared a Russian diplomat in their country “persona non grata,” retaliating in kind to last week’s decision by Moscow to expel diplomats from the three EU countries, accusing them of attending a rally in support of Navalny.

Moscow’s decision on Friday was an extra slap in the face for the Europeans because it came as Borrell – the EU’s top diplomat – was meeting with Russian Foreign Minister Sergey Lavrov. Borrell said he learned about the expulsions on social media.

Several lawmakers on Tuesday criticized the former Spanish foreign minister for the timing of his visit, and for not doing enough to rebut Lavrov at a media conference that some described as an “ambush.”

“The behavior of Foreign Minister Lavrov was unfriendly, uncooperative and unacceptable,” German conservative parliamentarian Michael Gahler said. “But was it not to be expected that Lavrov would produce an attack on the EU?”

The trip wasn't just about Navalny. Russia is a major trading partner and the EU depends on the country for natural gas. It’s also a key player in talks on curbing Iran’s nuclear ambitions and has a central role in conflicts that impact European interests, like those in Syria and Ukraine.

But EU countries are deeply divided over their approach to Moscow. European heavyweight Germany has strong economic interests there, notably the NordStream 2 undersea pipeline project, and a number of countries are reluctant to wade into any sanctions battle over Navalny.

Borrell said one aim of his visit was “to test if the Russian authorities are interested in a serious attempt to reverse the deterioration of our relations.” But, he said, “the answer has been clear. No, they are not. They are not if we continue to put the political situation and human rights issues in the package.”

“Russia has been trying to divide us. They seek to divide us,” he warned. “This seemed to be a clear objective during my visit. We should not fall into these traps.”