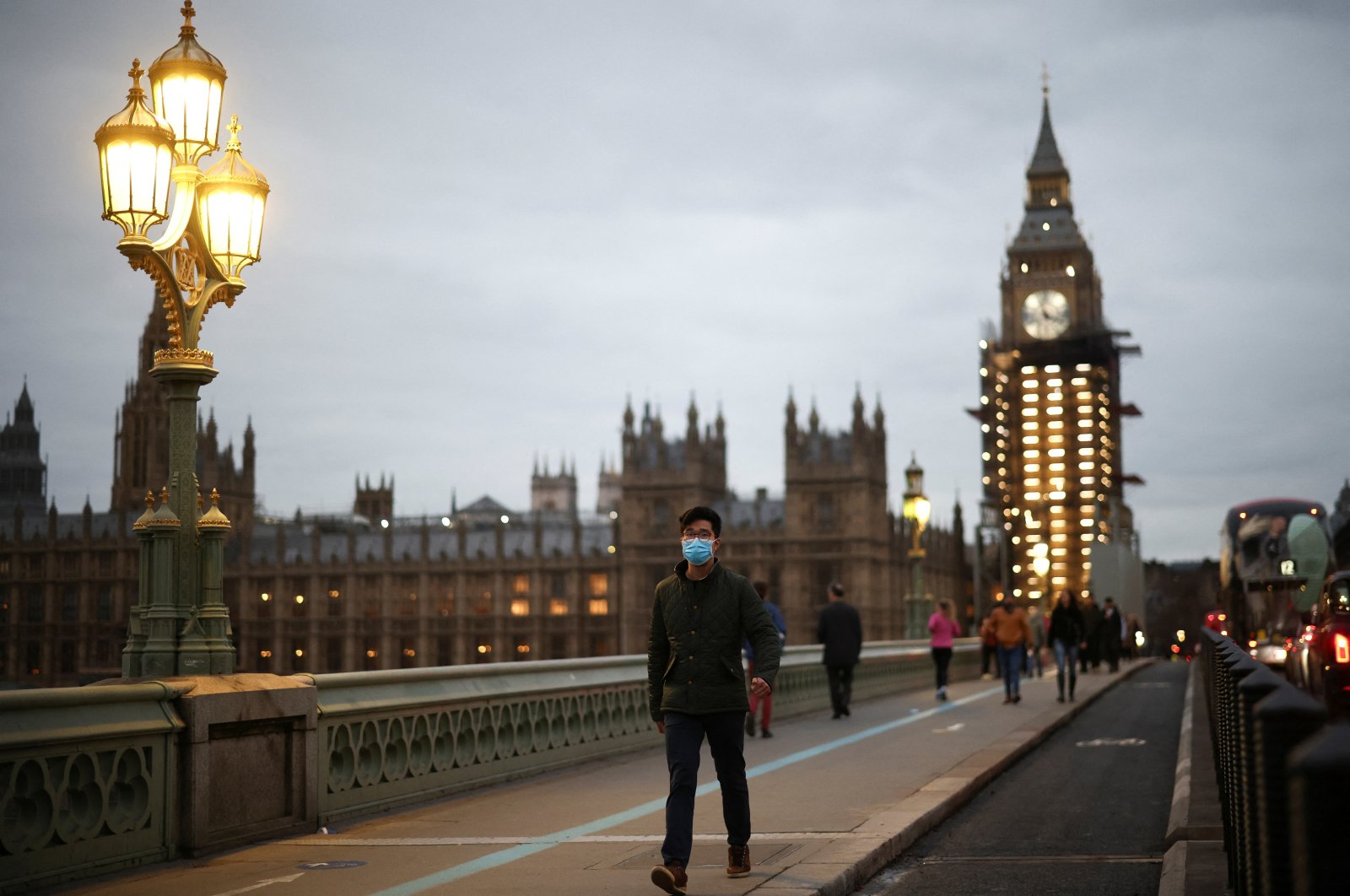 The United Kingdom on Wednesday recorded its highest daily number of COVID-19 cases since the start of the pandemic, with daily case-count reaching 78,610 and beating the Jan. 8 record when the U.K. was in its third national lockdown.

The substantial rise in cases has prompted a warning by U.K.'s Chief Medical Officer Chris Whitty, who has called for people to "prioritize what matters."

"I'm afraid we're also seeing the inevitable increase in hospitalizations up by 10% nationally, week-on-week, and up by almost a third in London," Whitty said, according to Anadolu Agency (AA). He added that cases are rising because of the "very rapidly-growing" omicron variant. "I'm afraid we have to be realistic that records will be broken a lot over the next few weeks as the rates continue to go up," Whitty said as quoted by the BBC News.

The chief medical officer called on the population to not mix with people unnecessarily and to be aware that the pandemic is real and present and even more so with the spread of this new, deadly and highly contagious variant.

Whitty also prompted people to take PCR and Lateral Flow Tests when visiting vulnerable people and advised meeting outdoors with people from other households or to meet in areas with good ventilation.

Prime Minister Boris Johnson also made clear that the government was not cancelling Christmas holiday events and that there would be no restrictions on gathering or the closure of restaurants, cafes or pubs, but advised people act with caution when thinking about socializing.

On Tuesday, the Parliament voted in favor of implementing "Plan B" measures – new restrictions that could see mask mandates in public venues and public transport as well the introduction of vaccine passes.

The U.K. on Sunday raised its COVID-19 alert to Level 4 – its second-highest level – amid a surge in cases of the omicron variant.

Level 4, according to the government's guidance, means "a COVID-19 epidemic is in general circulation; transmission is high and direct COVID-19 pressure on health care services is widespread and substantial or rising."

The country had been at Level 3 since May.

In Britain, where omicron cases are doubling every two to three days, the variant is expected to soon replace delta as the dominant strain in the country. England's chief medical officer warned that the situation is likely to get worse as omicron drives a new wave of illness during the holidays.

"The data out of the U.K. are quite alarming at this point," said Bronwyn MacInnis, director of pathogen genomic surveillance at the Broad Institute of MIT and Harvard. For example, she said, by Tuesday afternoon, omicron was already the most common variant in London.

In many ways, omicron remains a mystery. Hints are emerging from South Africa, where it was first reported, indicating it may cause less severe disease than delta but be better at evading vaccines.

But, MacInnis warned: "There's much more that we don't know about this variant than we do, including the severity."

At the same time, Lemieux said, there seem to be fewer tools to fight it. Some monoclonal antibody treatments don't work as well against omicron in lab tests, Lemieux said. Vaccines appear to offer less protection, although CDC officials said booster shots strengthen that protection.

As Britain faces a new pandemic crisis, France said Thursday that it will tighten restrictions on travel from the U.K. to slow the spread of the omicron variant of COVID-19.

"We will put in place a system of controls drastically tighter than the one we have already," government spokesperson Gabriel Attal told BFM television, saying the office of Prime Minister Jean Castex would issue a statement on the new measures in the coming hours. He said returning travelers would need a negative test less than 24 hours old, a blanket quarantine would be enforced on return to France, and trips for tourism would be limited.

"We will reduce the validity of the test to come to France from 48 hours to 24 hours," said Attal, as Agence France-Presse (AFP) reported. "We will limit the reasons for coming to France from the U.K., it will be limited to French nationals and residents and their families. Tourism or business trips for people who do not have French or European nationality or are residents will be limited."

"People (coming back) will have to register on an app and will have to self-isolate in a place of their choosing for seven days – controlled by the security forces – but this can be shortened to 48 hours if a negative test is carried out in France," he said.

The new omicron coronavirus mutant speeding around the world may bring another wave of chaos, threatening to further stretch hospital workers already struggling with a surge of delta cases and upend holiday plans for the second year in a row.

The White House on Wednesday insisted there was no need for a lockdown because vaccines are widely available and appear to offer protection against the worst consequences of the virus. But even if omicron proves milder on the whole than delta, it may disarm some of the lifesaving tools available and put immune-compromised and elderly people at particular risk as it begins a rapid assault on the United States.

"Our delta surge is ongoing and, in fact, accelerating. And on top of that, we're going to add an omicron surge," said Dr. Jacob Lemieux, who monitors variants for a research collaboration led by Harvard Medical School. "That's alarming, because our hospitals are already filling up. Staff are fatigued," leaving limited capacity for a potential crush of COVID-19 cases "from an omicron wave superimposed on a delta surge."

Most likely, he and other experts said at a news briefing Tuesday, an omicron surge is already under way in the United States, with the latest mutant coronavirus outpacing the nation's ability to track it.

Based on specimens collected last week, the Centers for Disease Control and Prevention (CDC) said omicron accounted for about 3% of genetically-sequenced coronaviruses nationally. Percentages vary by region, with the highest – 13% – in the New York/New Jersey area.

But Harvard experts said these are likely underestimates because omicron is moving so fast that surveillance attempts can't keep up.

Globally, more than 75 countries have reported confirmed cases of omicron. In the United States, 36 states have detected the variant. Meanwhile, delta is surging in many places, with hot spots in New England and the upper Midwest. The five states with the highest two-week rolling average of cases per 100,000 people are New Hampshire, Rhode Island, Michigan, Minnesota and Vermont.

Universities are abruptly closing classrooms during finals week with infections multiplying at a fast rate. Both the NBA and NHL have had to postpone games, and the NFL had its worst two-day outbreak since the start of the pandemic, with dozens of players infected.

Outside the United States, the president of the European Union said omicron will become the dominant variant in a month and declared that "once again, this Christmas will be overshadowed by the pandemic."

Scientists around the world are racing to understand omicron, which has a large number of worrisome mutations in important regions of its genetic structure that could affect how it spreads from person to person. How quickly the number of cases doubles, known as "doubling time," can give a preview of what the disease burden could be in a few weeks.

Dr. Anthony Fauci, the nation's top infectious disease expert, said Wednesday there is no need, for now, for an omicron-specific booster shot. The two-dose mRNA vaccines, the Pfizer and Moderna shots, still appear to offer considerable protection against hospitalization from omicron, Fauci said.

"If we didn't have these tools, I would be telling you to really, really be worried," Fauci said.

Jeff Zients, the White House coronavirus response coordinator, said the U.S. has the tools to fight the virus, including omicron, and "there is no need to lock down." With vaccines available now for 95% of Americans, "we know how to keep our kids in schools and our businesses open. And we're not going to shut down."

Health officials called on Americans to get vaccinated, get their booster shots, wear masks indoors and get tested before traveling and before holiday gatherings.

"Hospital capacity is already at a breaking point in many states because of severe cases of COVID-19," Michael Fraser, CEO of the Association of State and Territorial Health Officials, said in a statement.

Given the high level of transmission, MacInnis said there will undoubtedly be severe cases.

"No matter how severely it affects healthy, fully vaccinated and boosted populations, it will hit the most vulnerable among us the hardest still," she said. "So the elderly, the immunocompromised, other vulnerable populations will still be at greatest risk and still bear the brunt of this."