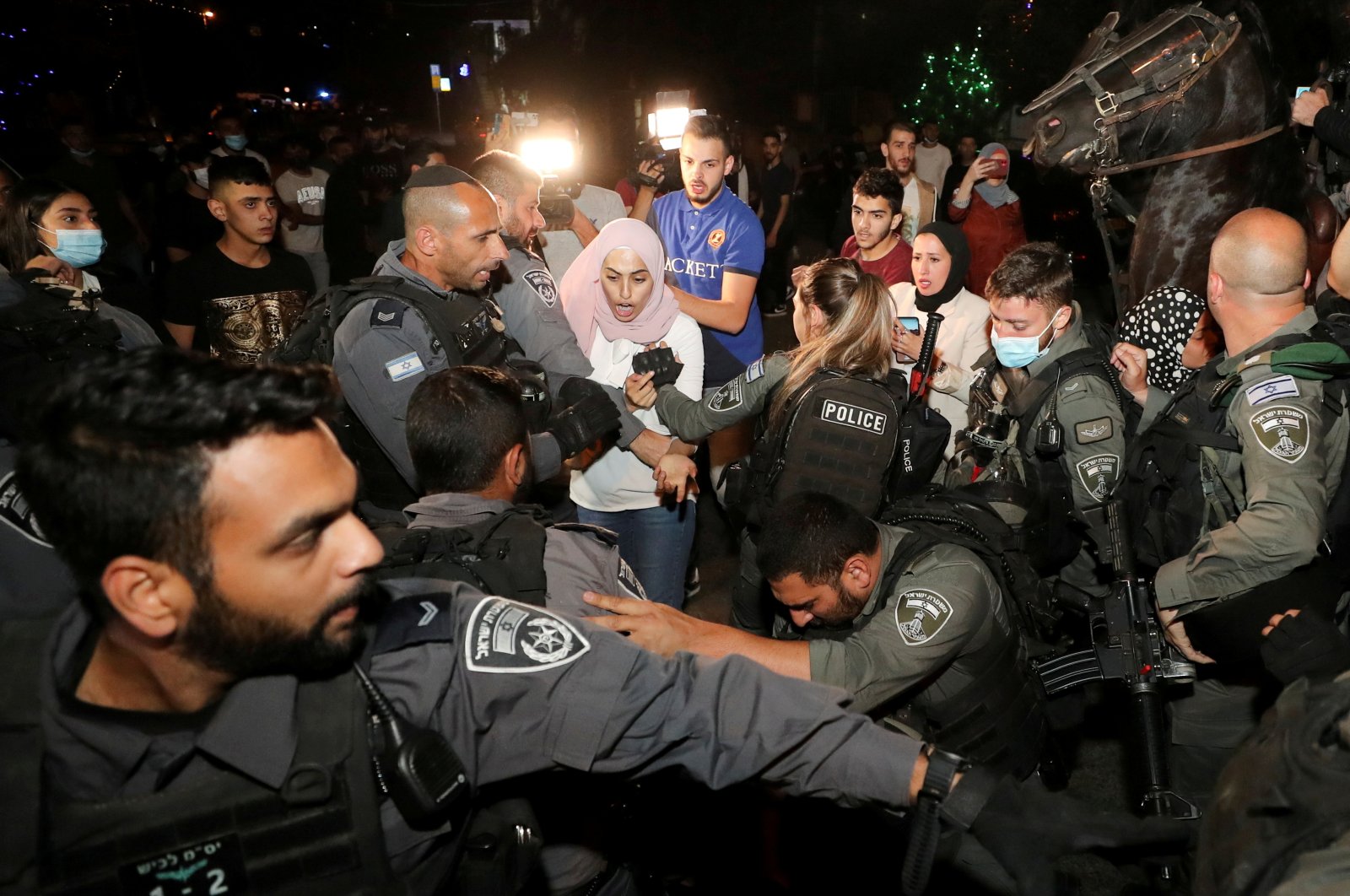 Prominent Palestinian activist Muna al-Kurd reacts during scuffles with Israeli police amid ongoing tension ahead of an upcoming court hearing in an Israeli-Palestinian land-ownership dispute in the Sheikh Jarrah neighborhood of East Jerusalem, occupied Palestine, May 4, 2021. (Reuters Photo)
by DAILY SABAH WITH AGENCIES Jun 07, 2021 1:32 pm

The arbitrary detention of Palestinian activists has been on the rise in the occupied territories. Masses are incarcerated but those released tell tales of the atrocities faced in Israeli prisons, including testimonies of cruelty extended to children, sparking both fear and condemnation

Tel Aviv shows no sign of stopping the arbitrary attacks on Palestinian cities or detentions of prominent activists, journalists and opposers to its apartheid policies across the occupied territories.

Although Israel released two prominent Palestinian activists, Muna al-Kurd and her twin brother Mohammed al-Kurd, who led protests in the contested neighborhood of occupied East Jerusalem against attempts by Israeli settlers to forcefully evict dozens of Palestinian families from their homes in the area, an estimated 4,500 Palestinians are believed to be held in Israeli prisons, including 41 women, 140 minors and 440 administrative detainees, according to data compiled the Commission on Detainees and Ex-Detainees Affairs, a local nongovernmental organization (NGO).

In East Jerusalem's Sheikh Jarrah neighborhood, Israeli settlers have been waging a decadeslong campaign to evict the families from densely populated Palestinian neighborhoods just outside the walls of the Old City. The area is one of the most sensitive parts of East Jerusalem, which is home to sites sacred to Muslims, Jews and Christians, which Israel captured in 1967 and annexed in a move not recognized internationally.

Israel views the entire city as its capital, while the Palestinians want East Jerusalem as the capital of their future state. Settler groups and Israeli officials say the Sheikh Jarrah dispute is merely about real estate. But Palestinians say they are victims of a discriminatory system. The settlers are using a 1970 law that allows Jews to reclaim former properties lost during the 1948 war surrounding Israel’s creation, a right denied to Palestinians who lost property in the same conflict.

The al-Kurd family in Sheikh Jarrah has been at the forefront of months of protests against the planned evictions. Early Sunday, police took Muna al-Kurd, 23, from her home. Her father, Nabil al-Kurd, said police "stormed the house in large numbers and in a barbaric manner.”

"I was sleeping, and I found them in my bedroom,” he said. Police then searched the house and arrested his daughter. Footage posted on social media showed her being taken away in handcuffs.

Police also searched for her brother, Mohammed, but he was not there. Later, he turned himself in to the Jerusalem police.

The siblings' lawyer, Nasser Odeh, told journalists outside the police station that his clients were accused of "disturbing public security and participation in nationalistic riots.” On Sunday evening, Muna al-Kurd was released. But before she was freed, police briefly clashed with a crowd outside the station. Later Sunday, Muna posted on Instagram that her brother had been released as well.

While Israel continues to detain pro-Palestine supporters and opposers to illegal Israeli activities in the occupied territories, Palestinian children are also targeted and face inhuman treatment in the detention centers.

Jerusalem journalist Zina Halawani, who was sent for five days to the Maskobiyah interrogation center on the night of May 27, said the fact that cells around her were filled with children, most between 12 and 15 years old, made a huge impression on her.

"There were five children in each cell, which is 2 by 3 meters (6 by 9 feet). On the other side were Israeli settlers who were detained due to criminal cases. They deliberately provoked the Palestinian children,” Halawani told Anadolu Agency (AA). She recalled harsh conditions that the children are living in at the interrogation center, such as being exposed to insults by settlers without any intervention by authorities.

"The court gave some of these children a protocol that allows them to call their families once daily, but as I saw the jailers were not responding to this. One of the children was screaming all the time, calling out for the other detainees. He was saying: ‘let her (the guard) allow me to call my mother,” said Halawani.

On her last night in detention, on a whim, an officer delayed the release of a child who was supposed to be let go. Zina said he was asking to go home.

"He was screaming all the time, ‘I want to go back to my home, I want my mother.' Many of the children there are still don't understand why they are detained,” she said.

The treatment of the children is a microcosm of the attitude that Israeli authorities have toward Palestinians. Not far from where Halawani was detained, Sultan Sarhan, 16, was part of a demonstration in front of the central court in Jerusalem, rallying with hundreds of Palestinians against a court's decision to evict families from their home in the Silwan neighborhood. Israeli forces attacked protesters and Sultan was subjected to a severe beating by soldiers and was arrested.

"They didn't take him to any medical center, despite his wounds,” his mother, Hanadi Sarhan, told AA. "Moreover, they didn't allow me to know anything about him for several hours.”

Sultan lost his father, Samer Sarhan, 11 years ago to Israeli bullets. Since then, additional suffering has been compounded on the life of Sultan and his brothers, Maher, 22, and Mohammad, 17. The eldest, Maher, was 11 when he lost his father. At 13, he was imprisoned for one year on allegations of throwing stones at police and settlers.

"I can't remember the number of detentions for each one of my sons,” the children's mother said, noting how she was alone with her young daughter for days following her sons' arrests. "All of them exposed to this horrific experience dozens of times. In January 2020, Sultan was in jail. The police stormed our home and arrested Maher around 2 a.m. The next night they were back and arrested Mohammad.”

"This frequent demolition for the house creates a feeling of instability, loss of security and disability when seeing the home become rubble,” said psychologist Malakeh Mohtaseb. "Here, when the child starts asking himself or herself, ‘what I should do to save my home? How I will protect myself?' these questions lead to fear and indignation.”

The first time Sultan was arrested, he was 10 years old, and at 12, an Israeli court put him under house arrest for one year. He was not allowed to go to his school or leave his house for any reason.

"During that year, Israeli forces used to storm our home every night, around 2 a.m. to take a picture that confirms the presence of Sultan inside the home. It was a real terror,” said his mother.

According to psychological experts, repeated exposure to traumatic events affects a child's behavioral and scientific development.

Sarhan said her children's education got progressively worse since they lost their father and it reached its lowest point after the frequent detentions. Naeema, 13, the youngest of her children, was at school when her classmates told her what happened to Sultan.

"She fell apart when she saw the pictures of her brother being beaten,” said Sarhan.

The mother said the frequent traumatic events raised fear but also strength in her children because of what they have experienced every day.

"The absence of the father leads to feelings of the loss of a lodestar and of a sense of protection that affects their personal identity and their belonging,” said Malakeh.

"The exposure of these events is recognized as serious traumatic events. Trauma harms the psychological well-being of the individuals, putting them at risk of forming complicated disorders such as anxiety disorders, severe depression or the most popular among these, post-traumatic stress disorder,” Beesan Warasneh, a doctor of neurology, told AA.

The complications not only interfere with the functionality and productivity of the individual, but they also form a critical risk for suicidal thoughts in an advanced and complex stage.

"One traumatic event has the potential to be a life distractor, so we can imagine how continuous exposure to trauma is unbearable to any human being,” she said.

Earlier this year, heavy-handed police actions in Sheikh Jarrah and other parts of East Jerusalem fueled weeks of unrest. Days after the initial violence, Israel launched an offensive campaign aimed at the Gaza Strip. Eleven days of constant airstrikes killed more than 250 people in Gaza Strip and wounded roughly 2,000. Sixty-nine children were among the dead as well as 39 women. Israel halted its aggression due to a cease-fire but continued to assault the Palestinian population in the ways described above.