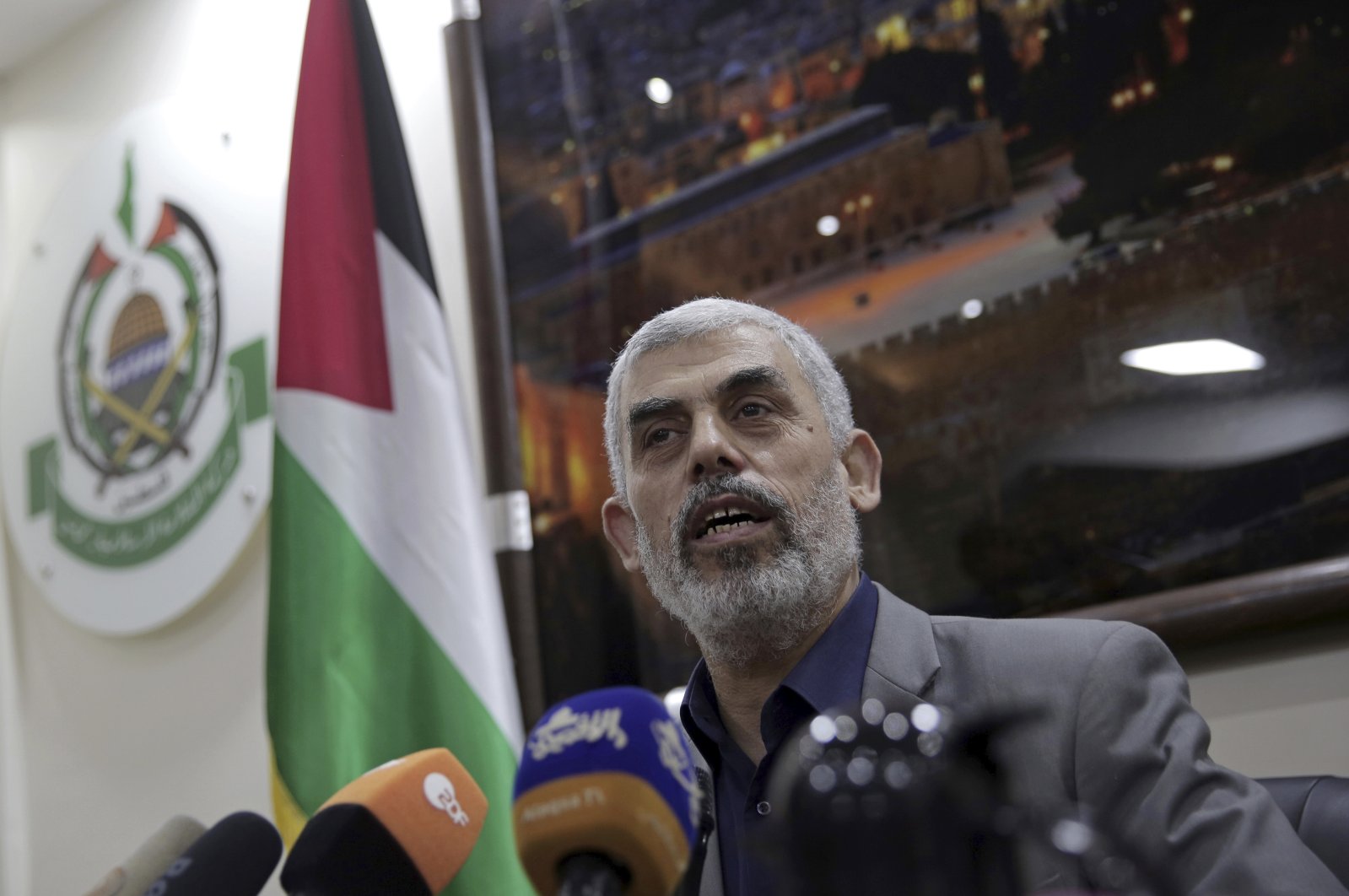 Yehiyeh Sinwar, the Hamas resistance group's leader in the Gaza Strip, speaks to foreign correspondents, in his office in Gaza City, May 10, 2018. (AP Photo)
by Associated Press Mar 10, 2021 6:41 pm
RECOMMENDED

Hamas' Yehiyeh Sinwar was re-elected on Wednesday as the Palestinian resistance movement’s leader in the Gaza Strip, leaving a figure closely aligned with the hard-line wing in charge of the group's strategy in its main stronghold.

Sinwar, 58, fended off a challenge from Nizar Awadallah, one of Hamas' founders. Sinwar will serve another four-year term. His victory could have deep implications for Hamas' relations with Israel and other regional players. It also could impact upcoming Palestinian elections, the first in 15 years.

Hamas' supreme leader, Ismail Haniyeh, congratulated Sinwar on his victory and praised both candidates for the "high confidence” they had gained. Haniyeh, a former Gaza leader who now lives in exile in Qatar, said the vote was "real, not phony,” and that tens of thousands of Hamas members had participated.

He said the results "demonstrate the seriousness of the movement in the upcoming Palestinian national and presidential elections.”

Sinwar is a former member of the group’s resistance wing who spent over two decades in an Israeli prison after being convicted of abducting and killing two Israeli soldiers. He was released in a 2011 prisoner swap.

Sinwar maintains close ties to the resistance wing and has often promoted a confrontational approach toward Israel. The Gaza Strip is Hamas’ most important area of activity. The group, which opposes Israel’s existence, seized control of the territory from the internationally recognized Palestinian Authority in 2007.

Since then, it has fought three wars and numerous skirmishes against Israel, holding on to power despite a crippling Israeli-Egyptian blockade that has devastated the economy.

The resistance wing has closer ties with Iran and favors a more confrontational approach toward Israel. Sinwar, however, has also shown himself to be pragmatic on some issues by preventing tensions with Israel from boiling over into war.

After taking up his position in 2017, he encouraged mass protests along the Gaza-Israel frontier as an alternative to its traditional tool of firing rockets into Israel. The protests were aimed at drawing attention to Gaza's poor living conditions and easing Israel's blockade.

However, the protests often turned violent, with protesters setting tires on fire and storming a separation fence. Scores of Palestinians were killed and wounded by Israeli fire. The protests fizzled out in 2019 under an unofficial truce in which Qatar provided tens of millions of dollars to Hamas for employee salaries, aid projects and cash payments to poor families in exchange for calm.

Sinwar has not been afraid to push for tougher confrontation. Last year, he threatened to go to battle if Israel didn't allow respirators and other medical aid to the impoverished territory to fight the spread of the virus.

"If we found that corona patients in Gaza (are) unable to breathe, we will prevent 6 million Zionists from breathing and we will get what we want from you by force,” he said at the time. Israel has allowed humanitarian supplies into Gaza throughout the pandemic.

Sinwar also has helped improve tense relations with neighboring Egypt. He tightened security along Gaza’s border with restive north Sinai to help the Egyptian military there, where it faced an insurgency by the Islamic State group's local allies.

The measures helped to quiet the situation in Sinai and as a result, Egypt opened a passageway for goods such as fuel and tobacco to enter Gaza. It also has increasingly opened more regularly the Rafah border crossing, Gaza’s main gate to the outside world.

People close to Palestinian President Mahmoud Abbas, who administers autonomous areas of the West Bank, said the Palestinian leader had been hoping for an Awadallah victory. The officials said Abbas believes the political wing is more pragmatic as the Palestinians prepare to hold elections in May aimed at bringing reconciliation between the rival governments.

They said Abbas is also upset at Sinwar's close ties with Mohammed Dahlan, a member of Abbas' Fatah movement who had a falling out with the president and now lives in exile. The officials spoke on condition of anonymity because they were not authorized to discuss Abbas' internal deliberations with the media.

Dahlan on Wednesday announced that he had arranged the delivery of 40,000 Sputnik V coronavirus vaccines to Gaza, donated by the United Arab Emirates. Dahlan, who lives in the UAE, last month arranged a similar delivery of 20,000 vaccines.

The new shipment is expected on Thursday, he said. His activities have underscored the inability of Abbas to secure vaccines for his people. The Palestinian Authority has only received 10,000 Russian-made vaccines, and sent just 2,000 of them to Gaza. The vaccines cover only a tiny fraction of Gaza's 2 million people.