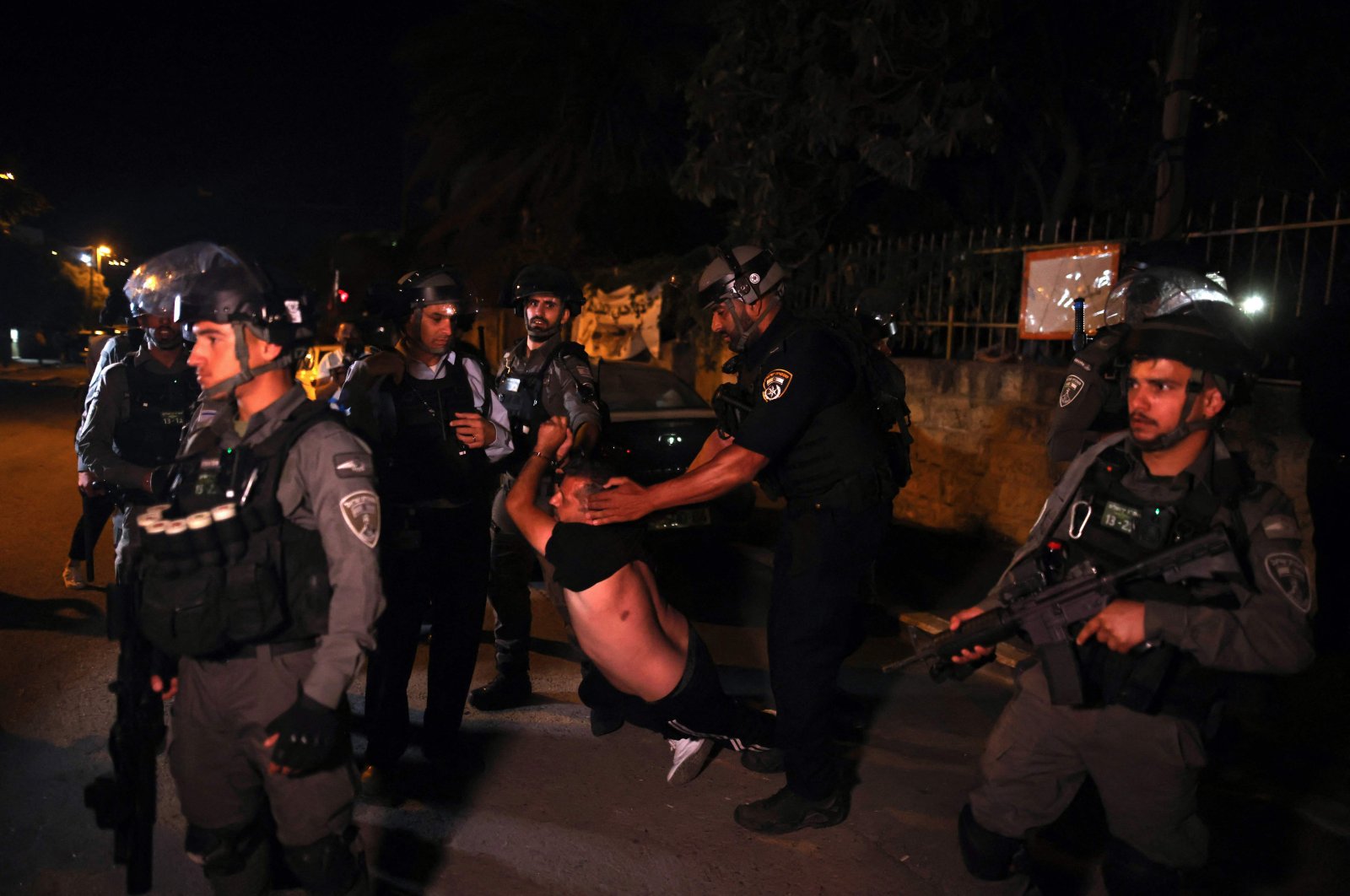 A Palestinian demonstrator is arrested by Israeli security forces while protesting the eviction of Palestinian families in the Sheikh Jarrah neighborhood of occupied East Jerusalem, Palestine, June 21, 2021. (AFP Photo)
by Agencies Jun 22, 2021 10:53 am
RECOMMENDED

New clashes erupted overnight in occupied East Jerusalem's Sheikh Jarrah neighborhood where Palestinians and Israeli settlers threw stones, chairs and fireworks at each other amid high tensions over the forced expulsion of Palestinian families from the contested area, officials said Tuesday.

The threatened evictions fueled protests and clashes in the runup to last month's 11-day Gaza conflict and pose a test for Israel's new governing coalition, which includes three pro-settler parties but is hoping to sideline the Palestinian issue to avoid internal divisions.

Israeli police and border officials said they arrested four suspects in the Sheikh Jarrah neighborhood. It was unclear who started the brawl. One woman was reportedly injured when she was hit in the back by a stone, police said.

The Red Crescent emergency service said its crews treated 20 Palestinians, including 16 suffering from pepper spray and tear gas and others wounded by rubber-coated bullets. Two other people were wounded, including an elderly man who was hit in the head, it said.

According to The Associated Press (AP), the Red Crescent said Jewish settlers threw stones at one of its ambulances and Israeli forces sprayed skunk water on a second ambulance belonging to the service.

The eruption of violence is the latest friction in Sheikh Jarrah, where weeks of unrest captured international attention ahead of the 11-day Israel-Hamas conflict last month that killed over 250 Palestinians in the Gaza Strip and injured almost 2,000. Thousands of people were displaced and the Palestinian enclave was left without medical care as Israel struck hospitals, businesses and residential buildings. The cease-fire took effect on May 21, but the long-running campaign by Jewish settlers to evict dozens of Palestinian families continues. And so the cycle of tension endures, in a stark early test for Israel's new coalition government, which is just over a week old.

At the helm under a rotation agreement is Prime Minister Naftali Bennett, head of the right-wing Yamina party. In two years, he'll be replaced by Yair Lapid, leader of centrist Yesh Atid. In charge of the opposition is Likud leader Benjamin Netanyahu, ousted from the premiership after holding the post for 12 years.

An intervention by Israel’s attorney general at the height of the unrest has put the most imminent evictions on hold. But rights groups say evictions could still proceed in the coming months as international attention wanes, potentially igniting another round of bloodshed.

The settlers have been waging a decadeslong campaign to evict the families from densely populated Palestinian neighborhoods in the so-called Holy Basin just outside the walls of the Old City, in one of the most sensitive parts of East Jerusalem.

Israel captured East Jerusalem – home to holy sites sacred to Muslims, Jews and Christians – in the 1967 Six-Day War and annexed it in a move not recognized internationally. Israel views the entire city as its capital, while the Palestinians want East Jerusalem as the capital of their future state.

The settlers say the homes are built on land that was owned by Jews prior to the 1948 war surrounding Israel's creation. Israeli law allows Jews to reclaim such property, a right denied to Palestinians who lost lands and homes in the same conflict.

Separately, hundreds of Israeli settlers held flag marches Monday in the occupied West Bank, which was secured by a heavy deployment of Israeli forces. An Anadolu Agency (AA) correspondent reported that the settlers started their march from Zatara square near the city of Nablus in the northern West Bank and marched toward a settlement outpost on Sbeih Mountain holding Israeli flags.

In the southern West Bank near the city of Bethlehem, eyewitnesses reported a rally in the Israeli settlement complex of Gush Etzion in which settlers held Israeli flags and chanted anti-Arab slogans.

Similar marches were held in the Israeli settlement of Kedumim near the city of Qalqilya in the northern West Bank and in the Al-Aghwar area near Masafer Yatta in the southern West Bank. Heavy deployments of Israeli forces were reported to have protected the marches.

On Thursday, Israeli settlers circulated calls on social media to protest by waving Israeli flags against what they said was the failure to carry out demolition orders for Palestinian homes in the so-called C area of the West Bank.

Under the 1995 Oslo Accords between Israel and the Palestine Liberation Organization (PLO), the West Bank, including East Jerusalem, was divided into three portions – Area A, B and C – with area C under the administrative and security control of Israel until a final status agreement is reached with the Palestinians.