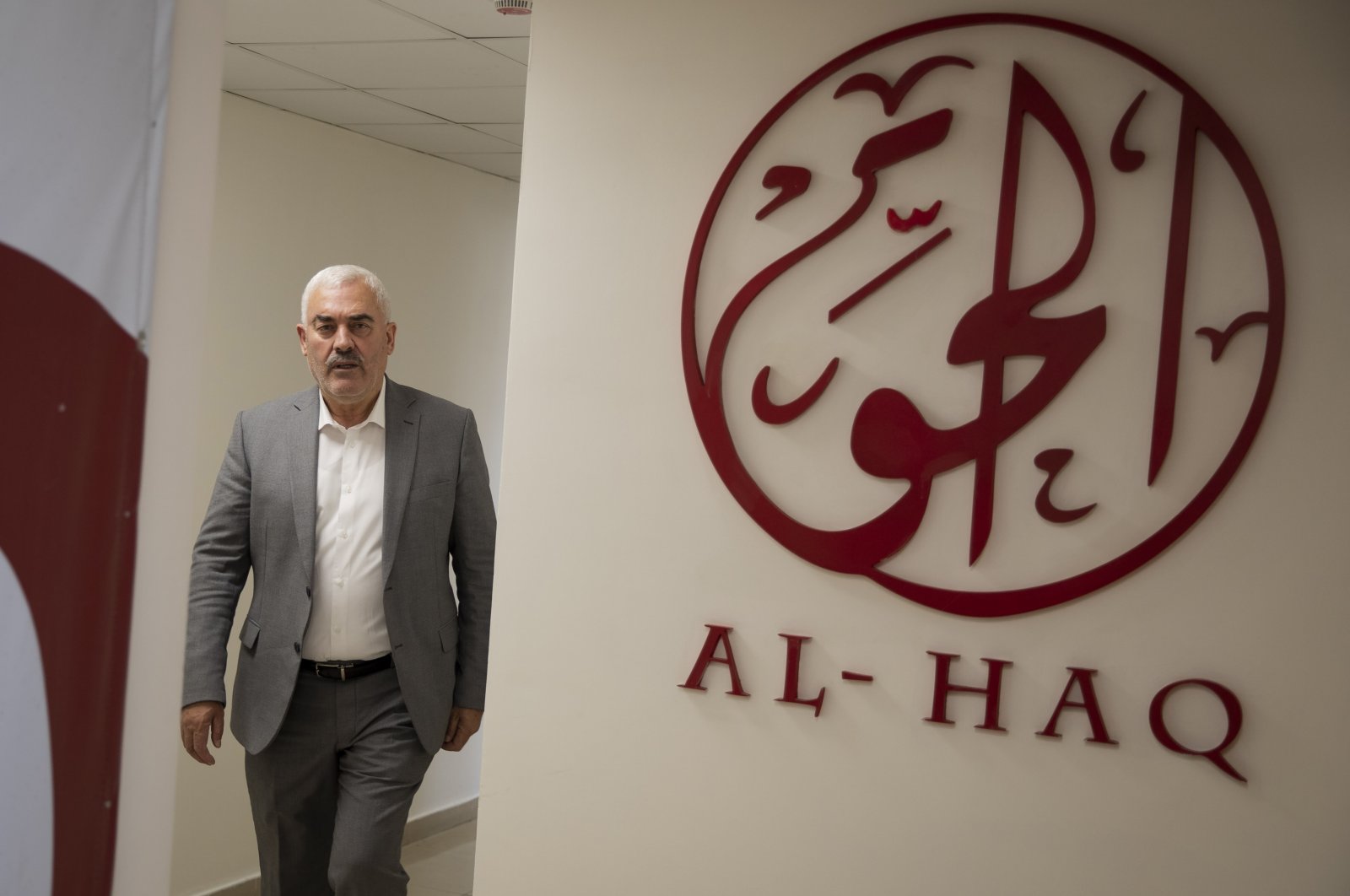 Security researchers disclosed Monday that spyware from the notorious Israeli hacker-for-hire company NSO Group was detected on the cellphones of six Palestinian human rights activists, half affiliated with groups that Israel’s defense minister controversially claimed were involved in terrorism.

The revelation marks the first known instance of Palestinian activists being targeted by the military-grade Pegasus spyware. Its use against journalists, rights activists and political dissidents from Mexico to Saudi Arabia has been documented since 2015.

A successful Pegasus infection surreptitiously gives intruders access to everything a person stores and does on their phone, including real-time communications.

It’s not clear who placed the NSO spyware on the activists’ phones, said the researcher who first detected it, Mohammed al-Maskati of the nonprofit Frontline Defenders.

Shortly after the first two intrusions were identified in mid-October, Israeli Defense Minister Benny Gantz declared six Palestinian civil society groups to be terrorist organizations. Ireland-based Frontline Defenders and at least two of the victims say they consider Israel the main suspect and believe the designation may have been timed to try to overshadow the hacks’ discovery, though they have provided no evidence to substantiate those assertions.

Israel has provided little evidence publicly to support the terrorism designation, which the Palestinian groups say aims to dry up their funding and muzzle opposition to Israeli military rule. Three of the hacked Palestinians work for the civil society groups. The others do not, and wish to remain anonymous, Frontline Defenders says.

The forensic findings, independently confirmed by security researchers from Amnesty International and the University of Toronto’s Citizen Lab in a joint technical report, come as NSO Group faces growing condemnation over the abuse of its spyware and Israel takes heat for lax oversight of its digital surveillance industry.

Last week, the Biden administration blacklisted the NSO Group and a lesser-known Israeli competitor, Candiru, barring them from U.S. technology.

Asked about the allegations its software was used against the Palestinian activists, NSO Group said in a statement that it does not identify its customers for contractual and national security reasons, is not privy to whom they hack and sells only to government agencies for use against “serious crime and terror.”

An Israeli defense official said in a brief statement that the designation of the six organizations was based on solid evidence and that any claim it is related to the use of NSO software is unfounded. The statement had no other details, and officials declined requests for further comment. The official spoke on condition of anonymity to discuss security matters.

Israel’s Defense Ministry approves the export of spyware produced by NSO Group and other private Israeli companies that recruit from the country’s top cyber-capable military units. Critics say the process is opaque.

It’s not known precisely when or how the phones were violated, the security researchers said. But four of the six hacked iPhones exclusively used SIM cards issued by Israeli telecom companies with Israeli +972 area code numbers, said the Citizen Lab and Amnesty researchers. That led them to question claims by NSO Group that exported versions of Pegasus cannot be used to hack Israeli phone numbers. NSO Group has also said it doesn’t target U.S. numbers.

Among those hacked was Ubai Aboudi, a 37-year-old economist and U.S. citizen. He runs the seven-person Bisan Center for Research and Development in Ramallah, in the Israeli-occupied West Bank, one of the six groups Gantz slapped with terrorist designations on Oct. 22.

The other two hacked Palestinians who agreed to be named are researcher Ghassan Halaika of the Al-Haq rights group and attorney Salah Hammouri of Addameer, also a human rights organization. The other three designated groups are Defense for Children International-Palestine, the Union of Palestinian Women’s Committees and the Union of Agricultural Work Committees (UAWC).

Aboudi said he lost “any sense of safety” through the “dehumanizing” hack of a phone that is at his side day and night and holds photos of his three children. He said his wife, the first three nights after learning of the hack, “didn’t sleep from the idea of having such deep intrusions into our privacy.”

He was especially concerned about eavesdroppers being privy to his communications with foreign diplomats. The researchers’ examination of Aboudi’s phone determined it was infected by Pegasus in February.

Aboudi accused Israel of “sticking the terrorist logo” on the groups after failing to persuade European governments and others to cut off financial support.

Israel accused the six groups of having links to the Popular Front for the Liberation of Palestine (PFLP), a group banned by the Israeli military. Aboudi was detained years ago on allegations of being a PFLP member but denies ever belonging to the group.

Tehilla Shwartz Altshuler, a legal expert at the Israel Democracy Institute, called the findings “really disturbing,” especially if it is proven that Israel’s security agencies, who are largely exempt from the country’s privacy laws, have been using NSO Group’s commercial spyware.

The executive director of Frontline Defenders, Andrew Anderson, said the NSO Group cannot be trusted to ensure its spyware is not used illegally by its customers and says Israel should face international reproach if it does not bring the company to heel.

“If the Israeli government refuses to take action then this should have consequences in terms of the regulation of trade with Israel,” he said via email.

Al-Maskati, the researcher who discovered the hacks, said he was first alerted on Oct. 16 by Halaika, whose phone was determined to have been hacked in July 2020. Al-Haq engages in sensitive communications with the International Criminal Court (ICC), among others, involving alleged human rights abuses.

“As human rights defenders living under occupation, we expect it was the (Israeli) occupation,” Halaika said when asked who he believed was behind the hack.

The phone of the third named hacking victim, Hammouri, was apparently compromised in April, the researchers said. A dual French national living in Jerusalem, Hammouri was notified by Israel on Oct. 18 of its intent to deport him, Frontline Defenders said.

Hammouri declined to speculate who was behind the hack, saying “we have to determine who had the ability and who had the motive.”

After Halaika alerted him, Al-Maskati said he scanned 75 phones of Palestinian activists, finding the six infections. He could not determine how the phones were hacked, he said, though the timeline of evidence encountered indicated the use of a so-called “iMessage zero-click” exploit NSO Group used on iPhones. The exploit is highly effective, requiring no user intervention, as phishing attempts typically do.

Facebook has sued NSO Group over the use of a somewhat similar exploit that allegedly intruded via its globally popular encrypted WhatsApp messaging app.

A snowballing of new revelations about the hacking of public figures – including Hungarian investigative journalists, the fiancee of slain Saudi journalist Jamal Khashoggi and an ex-wife of the ruler of Dubai – has occurred since a consortium of international news organizations reported in July on a list of possible NSO Group surveillance targets. The list was obtained from an unnamed source by Amnesty International and the Paris-based journalism nonprofit Forbidden Stories. Among those listed was an Associated Press (AP) journalist.

From that list of 50,000 phone numbers, reporters from various news organizations were able to confirm at least 47 additional successful hacks, the Washington Post has reported. NSO Group denied ever maintaining such a list.