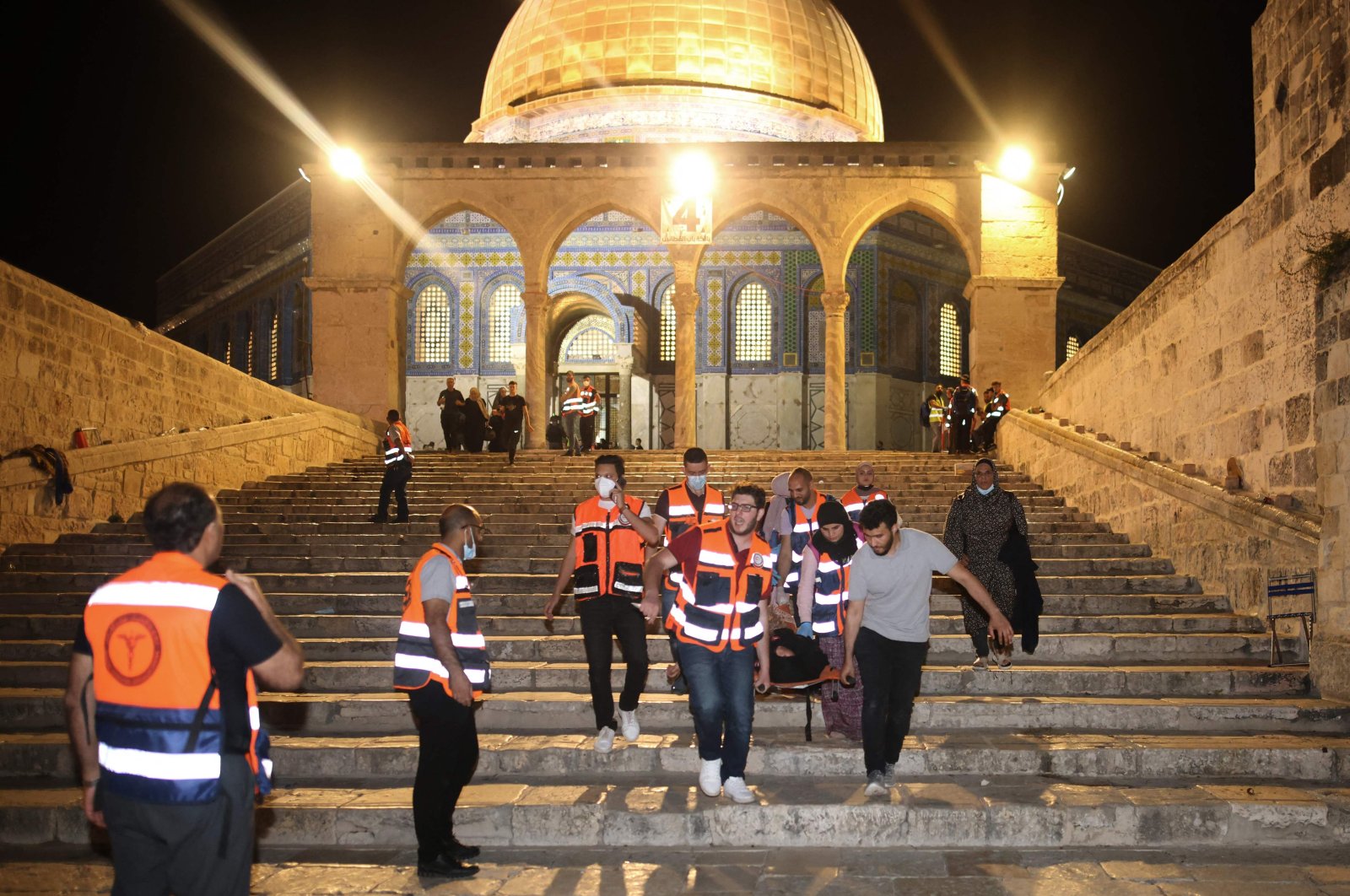 Palestinian medics evacuate a wounded person during attacks of Israeli security forces on Palestinian protestors in Jerusalem's al-Aqsa mosque compound, May 10, 2021. (AFP Photo)
by Daily Sabah with AP May 11, 2021 1:39 am
RECOMMENDED

The United Nations Security Council held emergency consultations Monday over the growing tensions between Israel and Palestinians and was considering proposed statement calling on Israel to cease evictions, as Israeli attacks resulted in the death of 20 Palestinians on Monday including 9 children.

Ireland's U.N. ambassador, Geraldine Byrne Nason, who joined in calling for the emergency meeting, said that "the Security Council should urgently speak out, and we hope that it will be able to do so today."

Council diplomats said all 15 members expressed concern at the attacks and rising violence but the United States, Israel's closest ally, said a statement might not be useful at this time.

U.S. State Department spokesman Ned Price, speaking to reporters in Washington, said the Biden administration wants to ensure that anything from the Security Council "be that statements or anything else, don't escalate tensions. That's our overriding priority."

The U.S. agreed to have council experts discuss the statement after all other members said the U.N.'s most powerful body must react, the council diplomats said, speaking on condition of anonymity because consultations were private. However, the U.S. was still wary late Monday afternoon, they said.

The United States Secretary of State Antony Blinken had said Monday that both Israel and Palestine needed to take steps to lower tensions as he urged both sides to de-escalate the situation.

The draft statement would express the Security Council's "grave concern" at escalating tensions and violence in the West Bank, including east Jerusalem, and "serious concern" over the evictions of Palestinian families from the Sheikh Jarrah and Silwan neighborhoods in east Jerusalem, "many of whom have lived in their homes for generations."

There have been weeks of mounting tensions and almost nightly attacks on Palestinians by Israeli troops in the Old City of Jerusalem during the Muslim holy month of Ramadan, already a time of heightened religious sensitivities.

Most recently, the tensions have been fueled by the planned eviction of dozens of Palestinians from the Sheikh Jarrah neighborhood of east Jerusalem where Israeli settlers have waged a lengthy legal battle to take over properties.

The proposed statement would call on Israel "to cease settlement activities, demolitions and evictions, including in east Jerusalem in line with its obligations under international humanitarian law" and refrain from unilateral steps "that exacerbate tensions and undermine the viability of the two-state solution."

It would express deep worry about daily clashes, especially in and around Jerusalem's holy sites which have led to many injuries and would call for restraint and "refraining from provocative actions and rhetoric."

Calling for respect for the historic status of Jerusalem's holy sites, the draft would also underscore "that Muslim worshippers at the holy sites must be allowed to worship in peace, free from violence, threats and provocations."

The council would also reiterate its support for a negotiated solution to the decades-old Israeli-Palestinian conflict where "two states, Israel and an independent, democratic, contiguous and sovereign Palestine live side by side in peace within secure and recognized borders."

Notway's U.N. ambassador, Mona Juul, said: "The situation on the ground is clearly explosive, not only in east Jerusalem but also in and around Gaza. This will have grave consequences and is the last this region needs."

She told The Associated Press (AP) her key message to the council was that it is vital for the 15-member council to come "out with a clear statement, calling for de-escalation and confirming its support to the two-state solution."

Meanwhile, the European Union foreign policy chief Josep Borrell urged de-escalation from both sides, as the EU has been ratcheting up its calls for both sides to step back from the violence.

"The significant upsurge in violence in the occupied West Bank, including in East Jerusalem as well as in and around Gaza needs to stop immediately," the statement said, as quoted by Agence France-Presse (AFP).

"All leaders have a responsibility to act against extremists. The status quo of the holy sites must be fully respected,” it continued.

"We reiterate our call on all sides to engage in de-escalatory efforts. Further civilian casualties must be prevented as a priority."