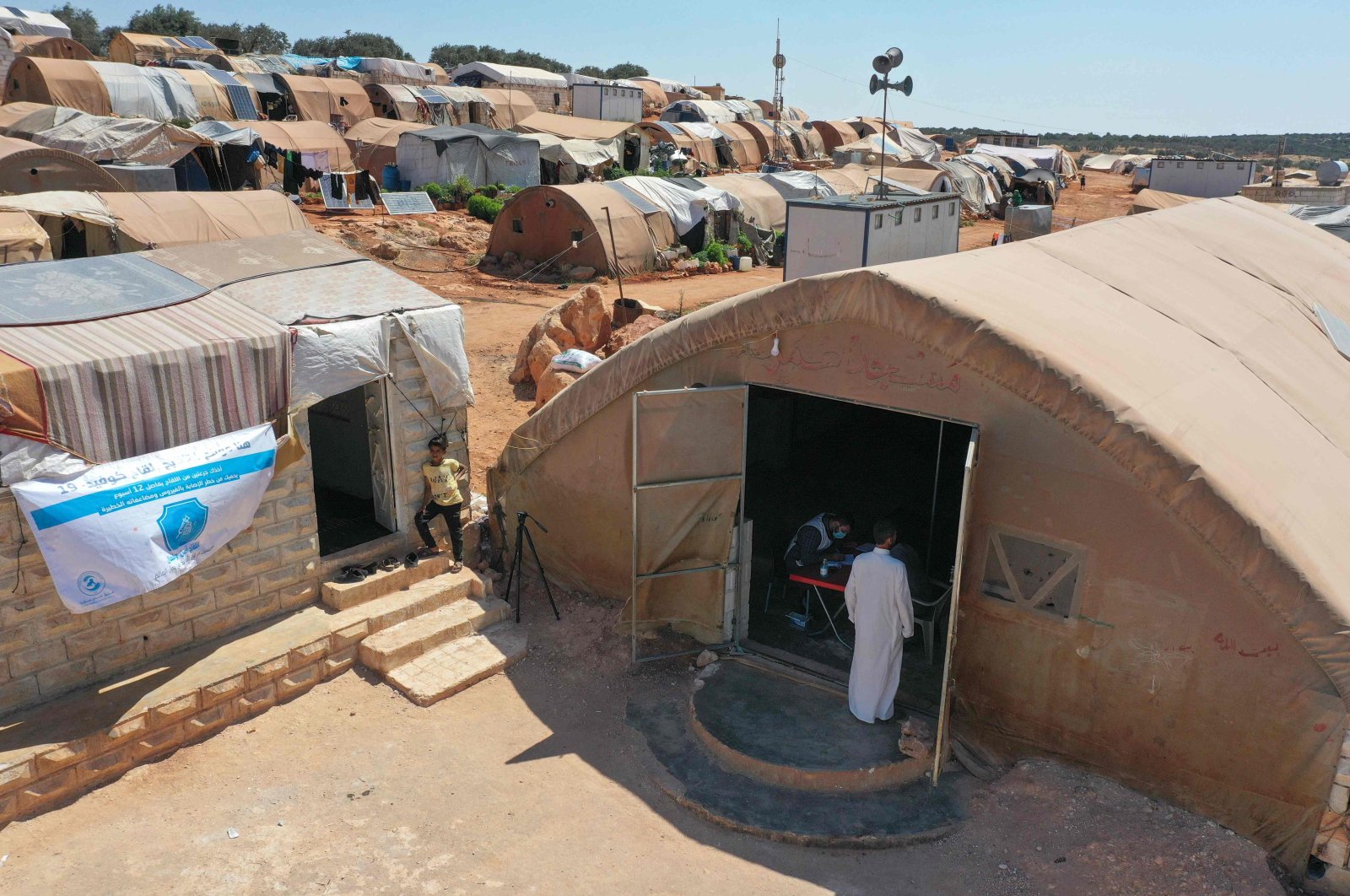 People enter a tent turned into a vaccination center at a camp for the internally displaced near Marret Misrin town, in northwestern Syria's Idlib, Syria, June 14, 2021. (AFP Photo)
by Daily Sabah with AP Jun 15, 2021 11:24 am
RECOMMENDED

Less than a month remains for the United Nations Security Council (UNSC) to decide on the fate of millions of displaced Syrians urgently in need of international humanitarian aid provided by the only remaining crossing from Turkey. United States President Joe Biden will seek to stave off another surge of civilian suffering in the devastating war in Syria when he meets with Russian President Vladimir Putin this week, appealing to Putin to drop a threat to close the last aid crossing into that country.

Russian forces have helped Bashar Assad’s regime survive the more than 10-year conflict and Putin hopes to be a broker for Assad in any international reconstruction effort for that country. Russia holds the key veto on July 10 when the UNSC decides whether to extend the authorization for aid crossing from Turkey.

Putin will meet with the American president in Geneva Wednesday in their first face-to-face since Biden took office. The Russian leader has already pressed successfully for shutting down all other international humanitarian crossings into Syria and argues that Assad should handle the distribution of any aid.

The aid crossing from Turkey into opposition-held northwest Syria serves up to 4 million people in Syria’s last remaining opposition stronghold. A decade of civil war in the Middle Eastern country has killed a half-million people, displaced half of the population, drawn in foreign armies and extremist groups, and left the economy in ruins.

Shutting down the international aid corridor and putting the Assad regime in charge of any humanitarian distribution would help position Assad as the winner in the war and Syria’s rightful ruler in the aftermath, and deepen the regional influence of Assad’s ally, Russia, in any rebuilding of Syria.

“Assistance should be given through the central government,” Putin told NBC News in an interview ahead of his meeting with Biden.

If there are fears that the assistance would be stolen, aid groups can post observers, the Russian leader said.

Opponents say the Assad regime has not hesitated to use civilian starvation and siege as a weapon in the war, and fear a destabilizing surge of refugees into neighboring Turkey if the crossing shuts down.

The U.S. ambassador to the United Nations, Linda Thomas-Greenfield, visited the threatened Bab al-Hawa border crossing between Turkey and opposition-held northwest Syria earlier this month who warned that closing it would bring “senseless cruelty.”

Turkey, which already holds close to 4 million Syrian refugees, joins the U.S. in opposing the closure of the crossing.

Mona Yacoubian, a senior adviser for the U.S. Institute of Peace think tank, said closing the Bab al-Hawa aid crossing could “precipitate this humanitarian catastrophe” and cause a destabilizing surge of refugees.

Biden’s possible points of leverage with Putin, Yacoubian said, could include stressing the harm that a new round of civilian suffering in Syria could do to Russia’s image as it positions itself to oversee hoped-for Arab and other international aid to rebuild Syria.

There also could be consideration of granting humanitarian waivers on sanctions that the United States and others have levied on the Assad regime, Yacoubian said.

Russia argues that U.S. support for what started out as a peaceful uprising in Syria, and condemnation of Assad's and other repressive regimes during the Arab Spring, fostered instability and violence and boosted extremist groups.

Many in Biden's administration were also in the Obama administration when it considered, but held back from, military intervention to stop Assad’s chemical attacks on civilians. They have since expressed regret that the U.S.' overall handling of the conflict failed to stop the bloodshed.

The 15-member Security Council first authorized a cross-border aid operation into Syria in 2014 at four points. Last year, it reduced that access to one crossing point from Turkey to Syria's opposition-held northwest at the insistence of Russia, the Syrian regime's closest ally.

Another showdown is likely over the renewal of the mandate for the operation, which expires July 10. A resolution to extend council approval needs nine votes in favor and no veto from any of the five permanent members Russia, China, the U.S., France and Britain. Several council members, including the U.S., are pushing to expand the cross-border operation and increase the number of cross-border aid access points.

If Russia vetoes the reauthorization of the remaining U.N. aid corridor from Turkey to northwest Syria it will “unleash a humanitarian calamity,” Human Rights Watch (HRW) stated last week, urging the body to open full cross-border operations and further border gates as the current resolution is set to expire July 10.

The Idlib de-escalation zone was forged under an agreement between Turkey and Russia. The area has been the subject of multiple cease-fire agreements, which have been frequently violated by the Assad regime and its allies. Most recently, a fragile truce was brokered between Moscow and Ankara in March 2020 in response to months of fighting by the Russia-backed regime. Almost a million people have fled the Bashar Assad regime’s offensive yet the regime still frequently carries out attacks on civilians, hindering most from returning to their homes and forcing them to stay in makeshift camps.