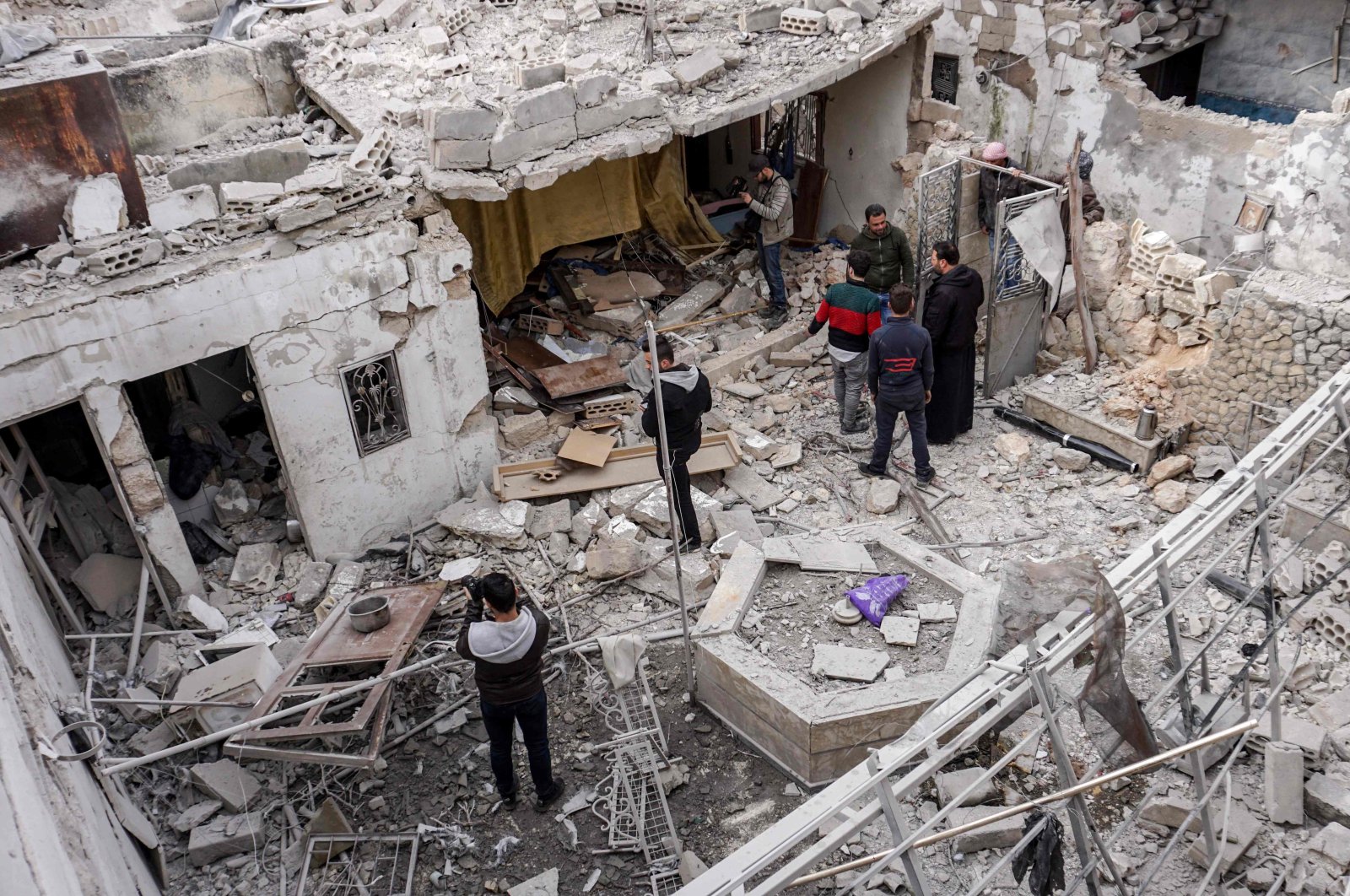 Syrians inspect damage from a reported regime airstrike at a civilian residence in the town of Saraqib in the northwestern Idlib province, Syria, March 10, 2019. (AFP Photo)
by DAILY SABAH WITH AGENCIES Apr 13, 2021 11:12 am
RECOMMENDED

The international community has demanded that the Bashar Assad regime be held accountable for a chemical weapons attack on an opposition-held area in February 2018 after an investigation by the global chemical weapons watchdog on Monday found “reasonable grounds to believe” that a regime helicopter dropped a chlorine cylinder on a Syrian town.

"The use of chemical weapons anywhere, by anyone, and under any circumstances is intolerable, and impunity for their use is equally unacceptable," said United Nations Secretary-General Antonio Guterres.

"It is imperative to identify and hold accountable all those who have used chemical weapons."

French Foreign Minister Jean-Yves Le Drian said the evidence of chemical weapons use by the Syrian regime was "documented and irrefutable" and called for an "appropriate response" from the international community.

His German counterpart Heiko Maas echoed him, saying: "Those responsible must be held accountable."

"For us, it is clear that such an obvious violation of international law cannot remain without consequences," Maas said in a statement following the release of the report.

"All OPCW member states are now called to respond to these continuing violations by Syria of the Chemical Weapons Convention," Maas said, urging governments to "use the available means within the framework of the convention to enforce its respect."

The Syrian regime's air force used the chemical weapon chlorine in an attack on the town of Saraqib in 2018, the global toxic arms watchdog said Monday after an investigation.

The report is the second by an investigations team set up by the Organisation for the Prohibition of Chemical Weapons (OPCW), which has new powers to apportion blame for attacks.

The OPCW said in a statement the Investigations and Identification Team (IIT) "concludes that units of the Syrian Arab Air Force used chemical weapons in Saraqib on 4 February 2018".

"There are reasonable grounds to believe that, at approximately 21:22 on 4 February 2018, a military helicopter of the Syrian Arab Air Force under the control of the Tiger Forces hit eastern Saraqib by dropping at least one cylinder," the OPCW report said.

"The cylinder ruptured and released chlorine over a large area, affecting 12 named individuals."

However, it added that it "regrets" that the Syrian regime refused to grant access to the site, 30 miles (50 kilometers) south of Aleppo, despite repeated requests.

Damascus and its allies have claimed that chemical attacks had been "staged" in Syria in order to incriminate the regime, a hypothesis ruled out by investigators in Monday's report.

"Several leads were followed in this respect," IIT coordinator Santiago Onate Laborde said in a statement on the OPCW website.

"However, these leads were not supported by any concrete evidence, and the IIT – despite numerous attempts – was unable to corroborate these hypotheses."

The team issued its first report a year ago, in which it said Bashar Assad's air force used the nerve agent sarin and chlorine in two attacks on the village of Latamnah in March 2017.

Despite strong objections by Damascus and its ally Moscow, OPCW member states voted in 2018 to set up the team to attribute blame for attacks. Previously, the watchdog could only say if chemical attacks had happened or not.

The regime has continued to deny the use of chemical weapons and insists it has handed over its weapons stockpiles under a 2013 agreement, prompted by a suspected sarin attack that killed 1,400 people in the Damascus suburb of Ghouta.

But OPCW investigators said they believed that orders for the 2018 Saraqib attack must have come from above, and there was no indication "rogue elements or individuals" were responsible.

"The IIT obtained information from various sources suggesting that, for chemical weapons to be used in the manner described above, orders would be required," the report on the attack said.

While it had not identified a "specific chain of command," the Syrian military general command appeared to have "delegated decisions on the use of chlorine to "operational level commanders," the OPCW said.

OPCW member states will vote later this month on whether to impose sanctions on the Syrian regime, including the suspension of its voting rights in the organization, over failure to comply with its rules.

The OPCW's governing body has told the Syrian regime it must declare all details about the facilities used to produce the sarin and chlorine used in the 2017 attacks.

Western powers have expressed concern that Damascus has failed to declare and destroy all its chemical weapons under the 2013 deal.

The OPCW chief said in March there were still gaps and inconsistencies in Syria's reports to the body.

The U.N. said in March that Damascus had for years failed to reply to a series of 19 questions about its weapons installations, which could have been used to stock or produce chemical weapons.