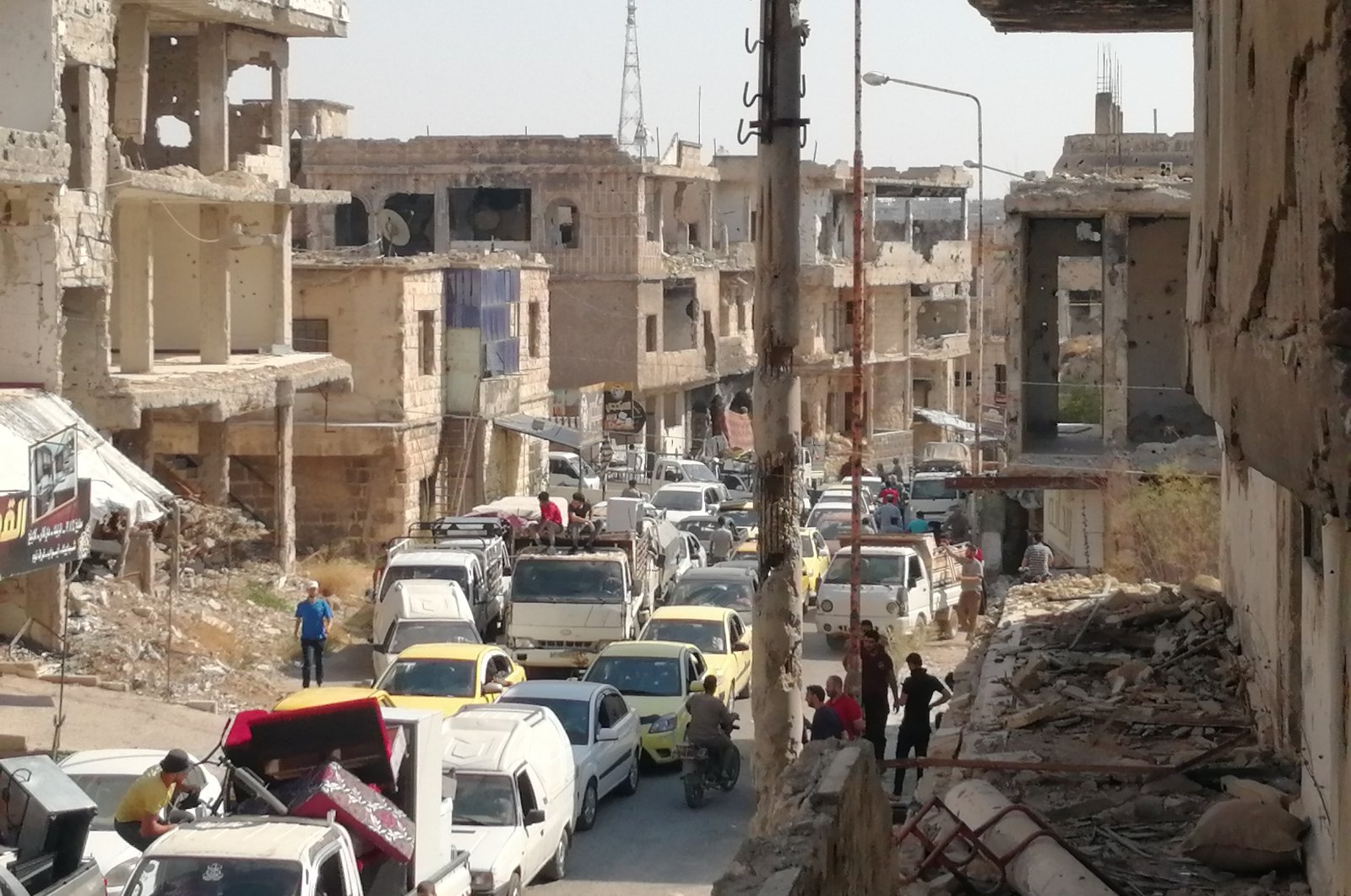 As the local sources stated, the Assad regime forces have been randomly targeting settlements in the southern Syrian city of Daraa with tanks and mortars since July 29

The Bashar Assad regime in Syria continues its two-week incessant bombardment of the southern city of Daraa, unilaterally violating the cease-fire agreement brokered under Russian mediation in July 2018.

While the regime captured large parts of the city in 2018, it now aims to capture the remaining areas as its nearly two-month siege on the city continues.

According to the information Anadolu Agency (AA) obtained from local sources, regime forces – consisting of the regime army and Iranian-backed foreign terrorist groups – have been randomly targeting settlements in the neighborhood with tanks and mortars since July 29.

Regime forces are demanding that the people living in the city's Daraa al-Balad neighborhood and the opposition hand over all their weapons and that some members of the armed opposition surrender, ordering that houses in the neighborhood be searched. But the people of the region and opposition groups are resisting.

Russia, which mediated the agreement reached in July 2018 between the opposition and the Assad regime in Daraa, remains silent while helping regime forces.

Opposition groups in the city center and the people of the region are resisting the entry of the regime into the neighborhood, armed with only light weapons.

The regime forces, which have been blockading the neighborhood since June 25, have not allowed the entry of humanitarian aid materials for about a month and a half.

A Daraa Reconciliation Center member, who did not want to disclose his identity due to security concerns, told AA that talks between the Assad regime and the people of the region have not been held for some time.

Pointing out that Russia has not taken an active role in the negotiations for a long time, he said: "There is information leaked to us that Russia will be more active in these talks in the coming days. We insist on protecting the safety and dignity of the families. While we want the blockade to end and our people to be left alone, they are trying to enter the neighborhood."

Highlighting that the Assad regime forces have imposed an intense blockade on the neighborhood for 46 days, he said, "We have no flour, electricity and water at the moment. The humanitarian situation is very bad. There are no basic food products. Most of our people migrated from the neighborhood."

With the start of the attacks, most people living in the neighborhood, which was home to around 40,000 civilians, migrated. Families who did not leave their homes as they have nowhere to go continue their lives in the shadow of the blockade and attacks.

Families are baking bread at home from dwindling flour supplies, as the bakery in the neighborhood is out of service due to the shortage of flour and fuel.

The residents of the neighborhood, who have great difficulties in accessing basic food products, expect the Assad regime and its supporters to end the siege and stop their attacks as soon as possible.

Abu Mohammed, who is responsible for the bakery in the neighborhood, said: "This bakery was the only bakery that met the needs of Daraa al-Balad. We were making bread for approximately 11,000 families here. Flour is restricted in our neighborhood due to the siege."

"We are out of flour now. We urgently need flour support," he said.

The Syrian Human Rights Network (SNHR), which documents rights violations against civilians, also published a report on the attacks of the regime forces on Daraa. The report states that people living in regions where the opposition was present boycotted the May 26 presidential election held by the Assad regime, and regime forces launched attacks on Daraa to exact revenge on the people of the region.

The report noted that tens of thousands of people had to migrate from the neighborhood and that regime forces detained 104 people in Daraa between June 23 and Aug. 9.

The European Union called for the protection of civilians in Daraa, saying in a statement that southwest Syria is seeing "the worst and deadliest violence" since 2018, according to the United Nations High Commissioner for Human Rights Michelle Bachelet, who said: "The stark picture emerging from Daraa al-Balad and other neighborhoods underscores how much at-risk civilians there are, repeatedly exposed to fighting and violence, and in effect under siege."

Lying in the Daraa province, which is known as the birthplace of the Syrian revolution, Daraa al-Balad was blockaded by regime forces on June 25 after residents, including former members of the Syrian opposition, resisted an order to surrender their light weapons and allow regime forces to search houses in the area.

According to the Daraa-based Reconciliation Center and local figures, the order was opposed because it violated the terms of a 2018 deal, under which the area residents and former opposition members had to surrender all heavy weapons.

The deal allowed thousands of rebels and civilians safe passage to other opposition-held regions, while Russia-backed regime forces launched an attack to reclaim Daraa. The regime began its military action despite agreeing to lift the blockade.

Tensions flared this month, leading to what the Syrian Observatory for Human Rights (SOHR) called the "most violent and broadest clashes in Daraa since it came under regime control."