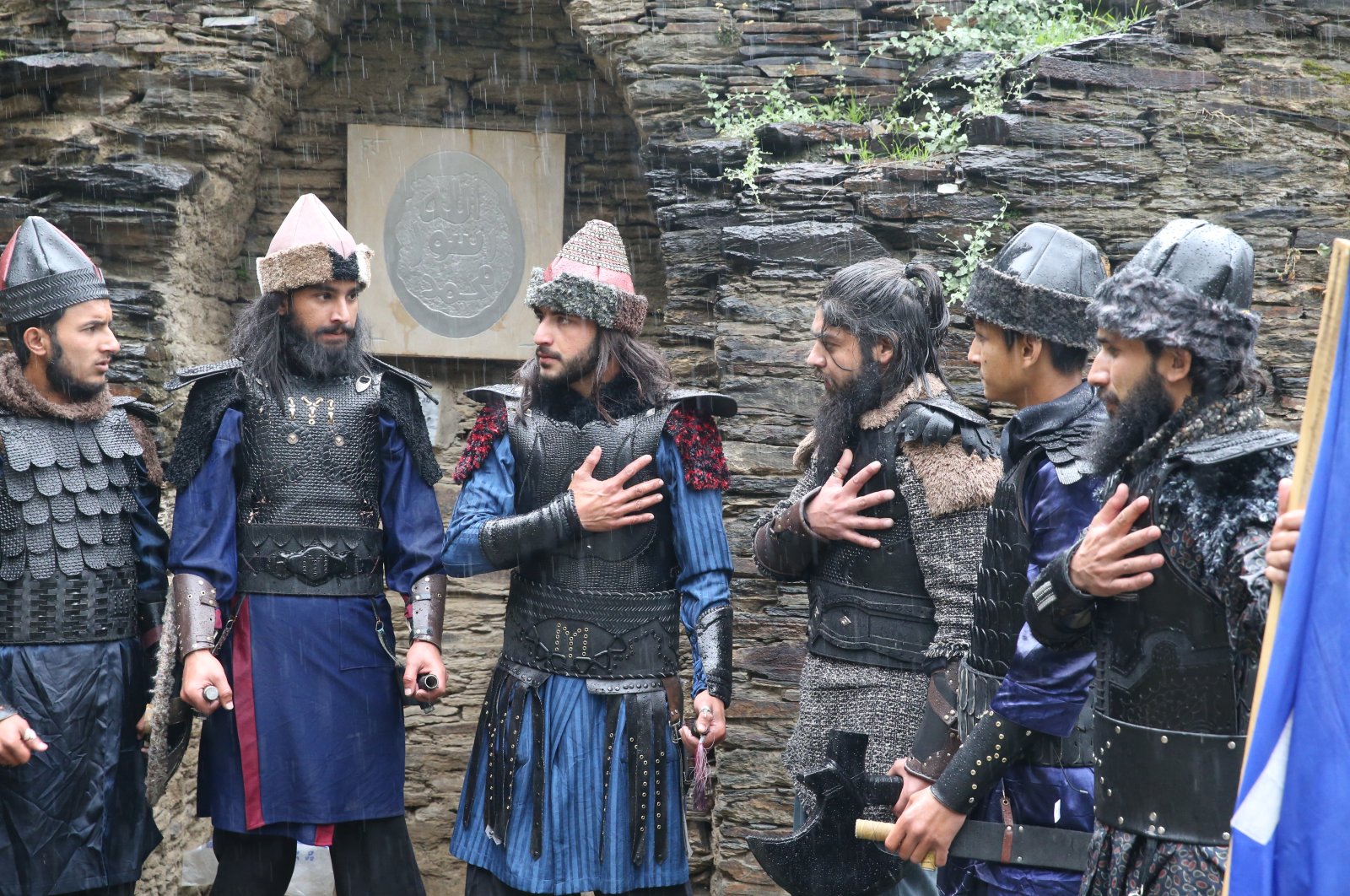 Pakistani youngsters will soon release their remake of 'Resurrection Ertuğrul,' which they filmed to show their affection for the Turkish superhit drama

A group of youth from northern Pakistan's Swat valley has started shooting an amateur film, inspired by the popular Turkish TV series "Diriliş Ertuğrul" (“Resurrection Ertuğrul”), using their own means.

The youngsters, aged between 15 and 26, decided to shoot the film in the village of Odigram in Swat, out of love for the series. They have so far sustained the filming with own interpretations and limited opportunities. The group has already shared some parts from on the film on their YouTube channel, Noor baas official. They are planning to release all episodes after the Ramadan Bayram, also known as Eid al-Fitr, with the title "Pakistani Ertuğrul."

The youngsters sell various items, including swords, axes, jackets and börks (a type of traditional Turkish hat), which they started to produce after being influenced by “Resurrection Ertuğrul.” Their shop in Swat has received orders from as far as India and Afghanistan. They have used the income from their shop to cover the costs of “Pakistani Ertuğrul.”

The people in Swat got used to seeing the young group wearing costumes of “alp,” brave ancient Turkic fighters, and carrying the flags of the Kayı tribe, which went on to establish the Ottoman Empire.

Speaking to Anadolu Agency (AA), the Pakistani youngsters why they decided to shoot the series and shared their experiences during filming.

High school student Muhammad Abbas, who plays Ertuğrul Ghazi, father of the founder of the Ottoman Empire Osman I, in “Pakistani Ertuğrul,” said, "We decided to shoot our own series after watching 'Diriliş Ertuğrul.' It impressed us a lot."

Noting that they first started to produce jackets, swords and axes inspired by the series, Abbas said: “Then, we shot a few scenes but after a while, we got more enthusiastic and decided to start filming the whole series.”

The youngsters made all of the clothes in the series by looking at the photos availabe on the internet. "We cover all the expenses ourselves. As most of us are students, we do not have enough money for everything. If we can find a sponsor, it would be very good for us,” Abbas added.

The group did not give up their dream of filming “Pakistani Ertuğrul” even if other people mocked their efforts. Abbas said: “Thanks to our work, we had the opporutnity to meet actor Celal Al, who played Abdurrahman Ghazi – a commander who served in the foundation of the Ottoman Empire – in 'Diriliş Ertuğrul' and 'Kuruluş Osman' ('The Ottoman') in a video call.”

"We are the cameramen, directors, screenwriters and actors of our series. We also learned skills like using swords and other weapongs by ourselves. This is quite difficult," he added. Highlighting that “Diriliş Ertuğrul” is an Islamic series, Abbas said, "This series has affected us, more precisely the whole world and Islamic countries."

Abbas said, "Ertuğrul Ghazi is the best hero for us. Not even India's Bollywood movie actors like Shahrukh Khan or Salman Khan can compete with him. The series’ Ertuğrul Ghazi, Abdurrahman Ghazi and Bamsı Beyrek mean a lot to us.”

"We all want to visit these figures’ graves if they find support. This is important for us," Abbas said.

The young group has completed filming of a large part of the first season of “Pakistani Ertuğrul” and dream of working with actors like Engin Altan Düzyatan, who plays the lead role of Ertuğrul Ghazi, and Cengiz Coşkun, who portrayed Turgut Alp – a Turkish fighter that served both Ertuğrul Ghazi and his son Osman I – in “Diriliş Ertuğrul.”

"If we are given such an opportunity, we will feel very lucky," Abbas said.

Nurullah Han, who plays the character of Turgut Alp in “Pakistani Ertuğrul,” added that “Diriliş Ertuğrul” is based on the history of Islam and said: "Previously, we watched Indian and British films and wasted our time. But this series shows us our own past and our glorious history. It gives us hope that it can be revived if we follow the steps of our ancestors.”

“Resurrection Ertuğrul,” often described as the Turkish "Game of Thrones," revolves around the story before the establishment of the Ottoman Empire. Set in 13th century Anatolia, the series illustrates the struggle of Ertuğrul Ghazi. It became a super-hit in Pakistan first followed by Kashmir, where the historical drama was binge-watched by fans. The series has more than 10 million subscribers on its Urdu-language YouTube channel.