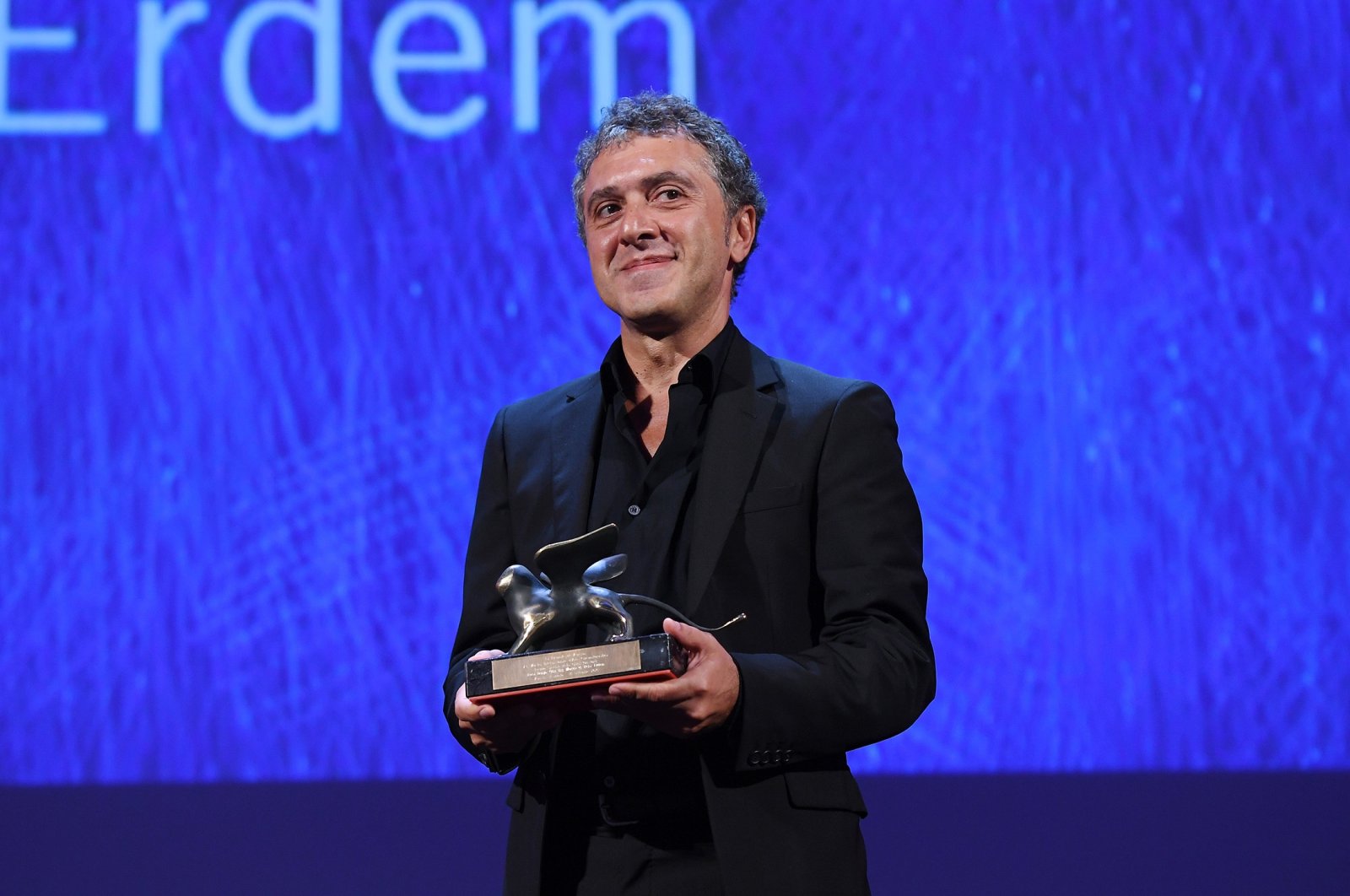 Director Reha Erdem poses with the Special Orizzonti Jury Prize for his movie "Koca Dünya" ("Big Big World") during the closing ceremony of the 73rd Venice Film Festival at Sala Grande on Sept. 10, 2016, in Venice, Italy. (Getty Images)
by Hakan Arslanbenzer Aug 20, 2021 11:53 am

Erdem, a Turkish director who received the special jury prize at the Venice International Film Festival in 2016 with “Koca Dünya” (“Big Big World”), takes inspiration from everything he observes and reflects them through clever minimalism in his movies

Minimalism has never been a common strategy in Turkish arts. Since Turkish audiences love pronounced depictions of feelings, events and relationships, Turkish artists generally tend to keep their narrative simple and rely on the apparent symbolism of the intrinsic or extrinsic event, with psychological affections also considered “events” by the Turkish audience.

On the other hand, such a tendency of the audience comes from their alert curiosity. An ordinary Turkish audience member, whether for a film or book, prefers not to watch or read in a pensive mood; rather, they seek the satisfaction of their expectations, which can only be fed by surprises, tragedies and other types of unambiguous scenario tricks. Yet, lowering the audience expectations and the need for surprises can create a place for minimalist narration.

In fact, some poets and fiction writers have used this minor strategy after the “Second New” literary revolution of the 1950s. Ülkü Tamer's minor poems or Tomris Uyar's short stories are good examples of minimalist poetics. However, Turkish cinema has been reluctant to employ minimalist strategies of authorship until the postmodern era, which began with the film “A Ay” (“Oh, Moon,” 1988) by director Reha Erdem. Today, there are at least a dozen Turkish directors with an understanding of minimalism including Zeki Demirkubuz, Yeşim Ustaoğlu, Semih Kaplanoğlu and Nuri Bilge Ceylan, among others; yet, Erdem is the only one whose work can be explained mainly through the analysis of his clever minimalism.

Reha Erdem was born in Istanbul on Nov. 9, 1960, to a middle-class family. His father was a military officer who visited many provinces of Turkey for his military service but left his son in Istanbul with his aunt to get a better education. Therefore, Erdem is a true Istanbulite, which is rare even among intellectual circles.

Erdem received his early education at Levent Elementary School before he was admitted to Galatasaray Junior High School. As a child, his main hobby was going to the movies. He went to watch films three times a week in the summer and once a week in winter, even though they had a television at home. He had a special love for the Turkish movies he saw at the theaters. Erdem was also an avid reader in elementary school.

He became a part of the stage theater productions at the Galatasaray High School with his close friend Kutluğ Ataman, who is also a movie director now. He also liked to take photographs, which he did without a proper photography education. Likewise, he made his first amateur motion picture with an 8 mm camera belonging to a close friend at school.

When Erdem graduated from high school in 1978, he wanted to receive an education in cinematic arts. However, his family tried to make him go to France for a college education since Turkish universities were in political chaos in those years. Young Erdem wished to stay to be a part of that chaos; not for the sake of the chaos, of course, but to play his part in Turkey’s political future, which was severely damaged by the military coup on Sept. 12, 1980.

Eventually, Erdem enrolled at the history department of Boğaziçi University, which he believes was one of the best college departments in those years. In addition to his official education, Erdem participated in the projects of the Boğaziçi Cinema Club, which played a significant role in many filmmakers’ or film critics’ biographies.

It is very easy for any critic to mark the intellectual environment of Boğaziçi as one of the major influences on Reha Erdem's cinema. Boğaziçi University, with a special emphasis on the history department, represented such intellectual virtues as universality, humanism and liberalism very close to American individualism but also fed by European postmodernism, all of which had a great impact on Erdem’s later work in cinema.

After a few years at Boğaziçi, Erdem left Istanbul, his home, for Paris, where he graduated from Paris VIII University's cinema and plastic arts department. Erdem was aware of postmodernism as early as the mid-1980s when he joined the philosophy lectures of Jean Francois Lyotard, perhaps the most famous theorist of postmodernism. Erdem also made some short films at the cinema institution called VARAN in Paris.

After returning to Istanbul in 1988, Erdem made his debut film, “A Ay” (“Oh Moon”) with the help of his friends and the sponsorship of a French company. “A Ay” was an extraordinary film in style. Erdem found an opportunity to show his film at the Istanbul Film Festival; however, it was never shown in theaters. I personally first got the chance to watch the film at a special event with only a couple of other viewers years after reading its script. It was black-and-white, showing the courage of the director. A complete image flow without a regular narration or plot, “A Ay” was shocking, abstract and artistic. Yet, even to my eyes, the eyes of an amateur art-film goer in his early 20s, the film was about the tragedy of being human.

Though artistically promising, “A Ay” was a total disaster in terms of popular exposure, as the film was never shown to a wider audience. After that, Erdem kept to himself for a decade before he made his second film, but his real debut film for an actual audience was “Kaç Para Kaç” (“A Run for Money,” 1999). Though the film attracted only about 15,000 spectators in 18 weeks, it received very positive reviews from critics regarding the "black comedy,” although we could argue if that's the right term for the genre of the film.

I think none of Erdem’s films are comedies, black or not, but they are political in genre and minimalist in style. You can compare Erdem’s work with political minimalists such as Aki Kaurismaki and Yeşim Ustaoğlu. In an interview with “Fayrap,” a literary journal edited by yours truly, Erdem would say: “The real political film bewilders people’s minds.” You must admit that Erdem's movies are made to amaze the audience.

After “Kaç Para Kaç,” Erdem made more thematic films. “Beş Vakit” (“Times and Winds”) was about the Oedipus complex, “Korkuyorum Anne” (“Mommy, I’m Scared”) involved a ridiculous but impacting phobia, while “Hayat Var” (“My Only Sunshine”) was about child abuse and adolescent love, and “Jin” (“Woman” in Kurdish) was related to three interrelated subjects: the ethnic conflict in Turkey, the emancipation of women and the devastation of nature. I personally didn’t like “Jin” much, because the three dimensions made it too heavy for audiences to follow the flow, which Erdem managed best in “Kozmos,” his most abstract film related to the wild nature of human beings and love. It is difficult to describe the scenario of “Kozmos” very well, yet the psychological effect of the film is sure to impact any viewer, representing something like a call to our cosmological and wild natural inner selves.

Erdem made his latest film, “Seni Buldum Ya!” (“Hey There!”) – which I believe is the director's first real black comedy – via Zoom during the COVID-19 shutdown.