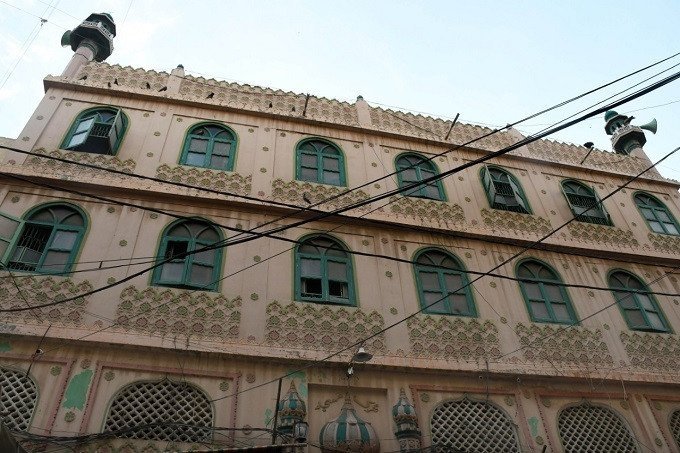 Combining Turkish and Mughal architecture in its design, Turk Mosque is a cross-cultural masterpiece in Pakistan's Karachi

Eminent designs by Turkish architects have always managed to achieve global fame as Turks constructed remarkable and magnificent buildings and structures throughout their history. An archival study has revealed that Turkish architecture is a culmination of cross-cultural designs and was influenced by Seljuk, Byzantine, Islamic Mamluk and Iranian styles. However, Turks have earned their place in architectural design, which rose to new heights in the Ottoman period.

Turning building material into an architectural piece was an artistic area in which the Turks excelled, and striking mosques were among the significant structures of Ottoman-era architecture. One of the key features of Ottoman mosques was their iconic central domes, followed by a series of other domes, buttresses and pencil-shaped minarets. The amalgamation of these features is enough to make a mosque building a symbolic structure. Istanbul’s Süleymaniye Mosque, built by famed Ottoman architect Mimar Sinan under the auspices of Suleiman I, also known as Suleiman the Magnificent, and the Sultanahmet Mosque, also known as the Blue Mosque, may be the greatest examples of Ottoman mosques.

Similar architectural features can be seen in monumental buildings in India and Pakistan. Moreover, Turks also enormously contributed to the national architecture of Pakistan in the past. Turkish architect Vedat Dalokay, for example, designed most of the prominent buildings in Pakistan, such as the Summit Minar and most importantly the Faisal Mosque in Islamabad.

Along with these architectural bonds between the two countries, Pakistan also houses a mosque called the “Turk Mosque” in the southern district of Karachi. The architectural historians of Pakistan do not have many details about the establishment of this mosque besides that it was built in the mid-19th century, more precisely in 1863. A plaque above one of the entrance gates of the mosque reads that it was built in 1280 in the Islamic calendar, which coincides with 1863 in the Gregorian calendar, but nothing is mentioned of its builder.

It is known that the mosque was partly reconstructed several times. The floor of the mosque, which was also reconstructed two decades ago, was originally built using yellow stones but white marble was used in the reconstruction.

Turk Mosque is a perfect combination of Mughal and Turkish architecture. The exterior of the three-story building has been painted green and white and there is a huge common prayer room inside on the ground floor that has been divided into one big and two small portions.

The walls of the mosque are made up of marble and have huge wooden windows. The mosque interior is well embellished with huge chandeliers made of white mirrors while white lights accessorize walls on either side and accentuate the pillars. There is a prayer niche “mihrab” within the mosque, indicating the qibla, which is the direction of the Kaaba in Mecca that Muslims face while praying. The imam of the mosque leads prayers and sermons in the mihrab. The mihrab is also decorated with mirrors and Quranic verses inscribed in Arabic and Hindi followed by names of four caliphs of Islam.

The building of the mosque is supported by an arch-shaped pillar elevated within the mosque along with minarets on the outside. The mosque served as a school in the past and houses a small two-three room space used as a residence.

Earlier, Turkish mosques were classified into three categories, namely single-domed mosques, T-plan mosques and multi-unit or multi-dome mosques. Single-domed mosques consisting of a square chamber were built in the later periods. Karachi's Turk Mosque is a square-shaped mosque with four long pencil-like minarets standing on four sides. There are also half minarets and a half tomb on one side of the wall, where "Turk Masjid" is written in the Urdu language.

Abdul Malik Turk, who died in the 1970s, was known to be the last Turkish-origin prayer leader to serve as muezzin of this mosque. Following his death, the imam of the mosque was appointed locally, and the mosque itself was run by local people despite being under the provincial government of Pakistan.

Syed Ashraf Shah, whose family has been long associated with mosque affairs, told the Anadolu Agency (AA) in an interview that the most popular historical view is that the mosque was built by the Turkish government following a visit by a Turkish delegation to the then Hindu-dominated area.

Nonetheless, this mosque is funded and maintained neither by the government of Turkey nor Pakistan though it continues to serve as an essential link between the two countries. There are several mosques found in Pakistan with stunning modern designs, but Turk Mosque with its architecture is considered by many people to be a symbol of cross-cultural connection. Some inhabitants of the area oppose any modification to the style or design of the building that would alter its original style to be more modern. Looking at these magnificent buildings one can say that Turkey has enormously contributed to the field of architecture, standing at the forefront as the most distinguished contributor to architectural world heritage.