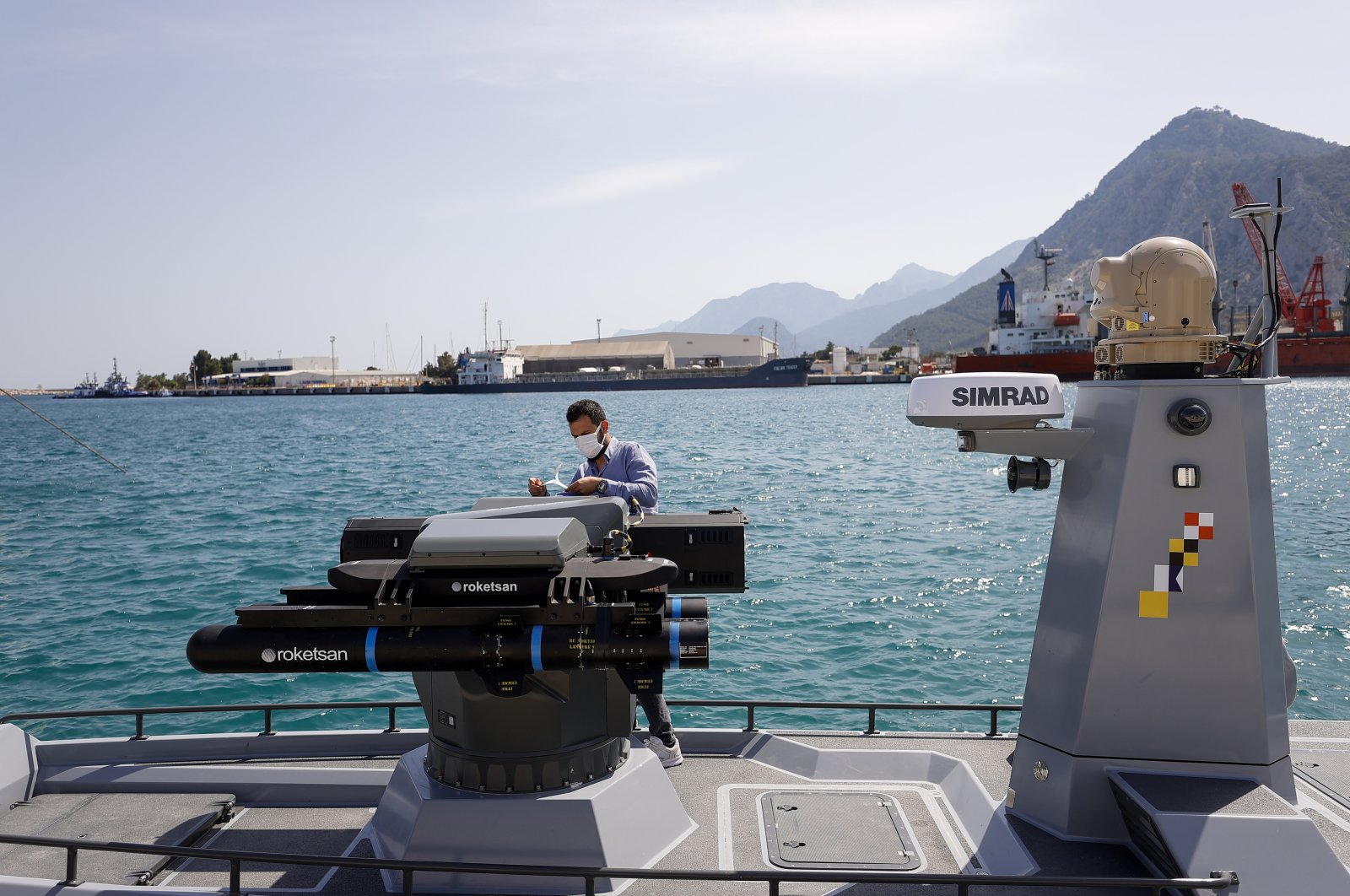 The battle-proven success of Turkish defense products eliminates any hesitation about their quality and operational strength, paving the way for sales abroad, the head of the top defense industry body in the country said Sunday.

Turkey has ambitious targets regarding those exports, Demir pointed out and explained the targets to be achieved.

He said Turkey’s first armored unmanned surface vessel (AUSV) is one of the most successful examples of where the local defense industry stands today. It recently took the first step by hitting a target with pinpoint accuracy in a military drill.

The marine craft was the first such vehicle produced as part of the ULAQ project, carried out jointly by Ares Shipyard and Ankara-based Meteksan Defense Industry Inc.

The unmanned vessel hit the target on May 27, in its first firing conducted as part of the Sea Wolf (Denizkurdu) 2021 military exercise, which was conducted simultaneously by the Turkish navy in the Eastern Mediterranean and the Aegean Sea.

“Field successes of our products play a very important role in their sales,” Demir said.

The manufacturing, launch and test firing of the AUSV came at a time when the Turkish defense industry has already made headlines thanks to the success of its unmanned combat aerial vehicles (UCAV), lauded by experts for changing the course of modern military warfare.

Prominent American political scientist, political economist and writer, Francis Fukuyama, for instance, wrote that the made-in-Turkey combat drones and their technology, previously held by just a few countries, namely the United States and Israel, has now elevated Turkey to a position where it has become a major broker and exporter of the technologies, allowing Ankara to have a say in regional politics.

The export of such drones that successfully picked and hunted armored vehicles and air defense systems in Syria, Libya and Nagorno Karabakh, signaled that the country may attain similar successes with its other unmanned platforms, such as the latest AUSV.

The combat drones, namely the Bayraktar TB2 (Tactical Block 2) UCAV of Baykar and Anka medium-altitude long-endurance (MALE) UCAV of Turkish Aerospace Industries (TAI) both are currently under the spotlight.

The first was operated in Azerbaijan, Ukraine, Syria and Libya either by the Turkish Armed Forces (TSK), or purchasing countries. It was also procured by Qatar. The producer most recently signed a new export agreement with Poland.

Anka, on the other hand, will soon be exported to Tunisia for the first time.

Demir pointed out that Bayraktar TB2 UCAVs will fly in the skies of Poland after Ukraine, Qatar and Azerbaijan, underlining the importance of selling these products to a European Union and NATO member country.

He further stressed that Poland made this purchase by conducting an unbiased evaluation and after considering the historical relations between the two countries.

It is also worth mentioning that the purchase was very fast, Demir said.

“The time between the beginning of our contacts and the purchase was very short. This showed how closely they had been monitoring us, had knowledge about the products and acted without prejudice,” the SSB head said, as "there is no longer any room for hesitation about the quality and operational strength of our products.”

“We would like to thank them both for their friendship and willpower toward Turkey. They will see that this step has made a huge contribution to them,” he added.

Demir noted that Turkey's cooperation models in the defense industry are “open, friendly and based on the goodwill that no other country can offer."

Commenting on the embargoes and the Turkish defense industry’s improvement in parallel to them, Demir said this is not like being sanctioned and then immediately starting to manufacture the sanctioned product locally as this kind of production is not something that can happen in a few weeks.

Giving an example that there is no such thing as “they didn't give us the drone camera, so we started right away," Demir said: "We started working on drone cameras five to six years ago with the thought that there might be an obstacle in front of us. It's the same in other fields. We prepare for potential obstacles, especially in strategic and technological areas." he said, while it is likely the embargoes do speed up the process and make contributions but it is not something that happens very quickly.

His statements were on an April decision made by Canada to ban the export of some defense gear to Turkey. The Common Aperture Targeting System (CATS), developed by leading defense contractor Aselsan, has now replaced the foreign parts, namely from Canada, in unmanned aerial vehicles (UAVs).

Selçuk Bayraktar, the chief technology officer (CTO) of the drone magnate Baykar said at the time of the Canadian decision, that Aselsan produced the electro-optic camera years ago. It has been working successfully in the country and has also been exported. The Bayraktar TB2 had already test-fired domestically developed ammunition using the Aselsan-developed CATS way back in November 2020.

Meanwhile, Demir reiterated that Turkey should further its independence, especially in technological and strategic fields.

The independence in production in those areas comes first even before the costs of the production, he said.

"For this reason, we are working on every issue that we define as strategic. We will overcome any obstacle that may arise in this or that matter today,” Demir noted.

The SSB head stressed, “Turkey's biggest power is in forming an independent policy in its defense industry.”

Turkey not only produces strategic products locally, but it now exports them as well, Demir said, adding that the next plan is to reduce costs to make the process more sustainable.

He highlighted that the country is now on its way to become a remarkable player in the defense industry sector, which has been dominated by a handful of countries for years.

Demir said they are trying to build the future as well as support and keep the defense industry sector thriving.