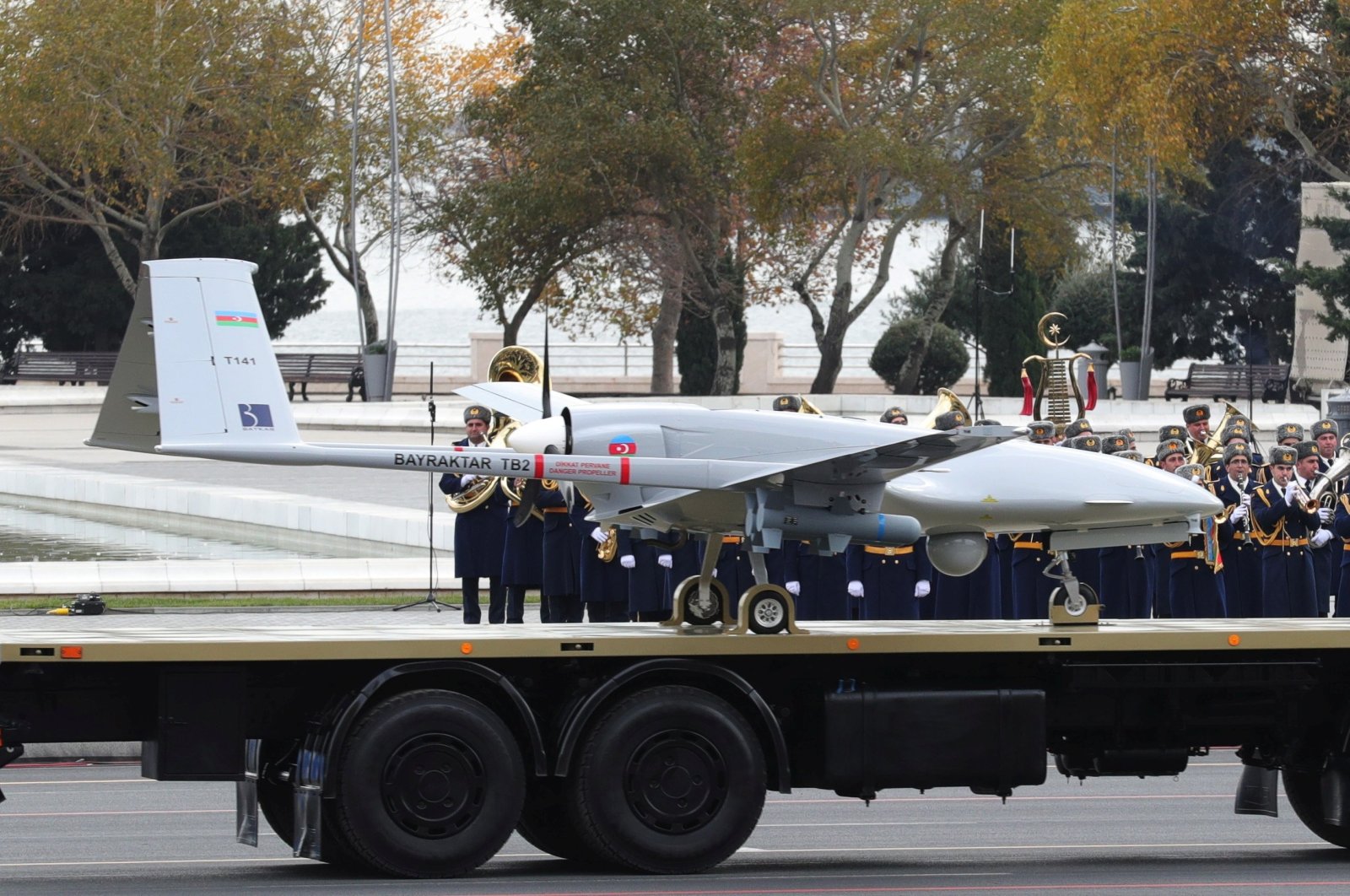 An Azerbaijan army-owned Bayraktar TB2 UCAV is displayed during a military parade to mark the victory in the Nagorno-Karabakh conflict, in Baku, Azerbaijan, Dec. 10, 2020. (Photo by Turkey's Presidential Press Office via Reuters)
by DAILY SABAH Apr 07, 2021 1:03 pm
Edited By Ayşe Betül Bal
RECOMMENDED

The operational capabilities of Turkish combat drones have made the headlines numerous times recently. These discussions are generally centered around their success at picking and hunting armored vehicles much bigger than themselves on the field, whether operated by Turkey or other purchasing countries.

However, another key aspect is how this technology, previously owned by just a few countries, namely the United States and Israel, has now elevated Turkey to a position where it has become a major broker and exporter of the technologies, allowing Ankara to have a say in regional politics, as most recently pointed out by the prominent American political scientist, political economist and writer, Francis Fukuyama.

Fukuyama drew the world’s attention to the Turkey-made drones once more in his article, “Droning on in the Middle East,” which was published on April 5 on Americanpurose.com.

Recalling his speculations made in a Financial Times article back in 2012, published under the title “Why we all need a drone of our own,” Fukuyama argued that if others also have access to the drone technology, largely controlled by the U.S. and Israel, it would have “big implications for global politics,” and inevitably “change the nature of interstate conflict.”

He said although the drones are not yet largely used in missions such as against the protection of critical infrastructures like nuclear plants, “the global landscape has already been changed by military drones.”

This is where Turkey enters the stage, a country that previously relied on imports like Israeli Heron drones but did not achieve their widespread and effective use, thus developed its own technology.

Like many, Fukuyama stressed that the embargoes imposed by the U.S. in 1975 or the NATO-ally rejecting the sales of Predator and Reaper drones led Turkey toward domestically producing the aerial vehicles.

“Drones are, however, not that hard to manufacture, and the most recent Turkish ones are quite impressive. The TB2 can stay aloft for 24 hours, and can perform both reconnaissance and attack missions,” he wrote.

Currently, there are two major drone manufacturers in Turkey, Baykar – led by MIT-educated Selçuk Bayraktar – who sold its Bayraktar TB2 unmanned combat aerial vehicles (UCAVs) to several “brotherly and allied” countries, namely Azerbaijan and Ukraine, and Turkish Aerospace Industries (TAI) who has most recently signed an export deal for its Anka UCAV with Tunisia.

According to Fukuyama, Turkey’s use of drones brings a change in land power similar to the change created by British battleship “Dreadnaught that obsoleted earlier classes of battleships, or the aircraft carrier made battleships themselves obsolete at the beginning of World War II,” marked a new era in the naval history.

What Turkish drones achieved in marking this new era is, according to the American intellectual, is challenging the once-widely accepted argument of “only a tank could destroy another tank.”

“One of the little-known facts about the 1967 Middle East War was that only a couple of Egyptian tanks were killed from the air in Israel’s massive opening air strike, because it was too difficult to hit so small a target with an airplane. In the intervening years, precision-guided munitions began to proliferate, making the targeting of tanks much easier, but they still required expensive platforms like the A-10 close-support attack aircraft, which in turn necessitated expensive air defenses to operate against a sophisticated opponent,” Fukuyama wrote, adding that "however, now relatively cheaper, hard to defeat, and smaller crafts are being used to destroy those tanks, or air defense systems and they don’t even risk the life of human pilots."

Turkey used the drones successfully to destroy enemy positions in several recent military conflicts, he said, including Libya, Syria, and in the Nagorno-Karabakh war between Armenia and Azerbaijan, and, more particularly, in the fight against the PKK terrorist organization inside its own borders.

“In the process, it has elevated itself to being a major regional power broker with more ability to shape outcomes than Russia, China, or the United States,” Fukuyama emphasized, stressing that “the effectiveness of these weapons was first demonstrated beyond Turkey’s borders in Syria in March 2020, where in retaliation for a Russian-backed Syrian attack that killed 36 Turkish soldiers, Ankara launched a devastating attack on Syrian forces that were moving into Idlib province along the Turkish border.”

“Video footage showed them destroying one Syrian armored vehicle after another, including more than 100 tanks, armored personnel carriers, and air defense systems.”

Fukuyama highlighted that the operations carried out in retaliation brought the Syrian offensive to a complete halt, thus making the Idlib province "a haven for refugees,” and defeated “what would have been a genocidal act against the refugees who had sought shelter in Idlib province.”

The Turkish drones were then operated to attack an airbase in Libya used by United Arab Emirates (UAE)-backed Khalifa Haftar, halting the Libyan warlord’s offensive against the U.N.-recognized Tripoli government.

Most recently, during the Nagorno-Karabakh war, Turkish drones intervening for Azerbaijan against Armenia occupier forces, Fukuyama noted, “destroyed an estimated 200 tanks, 90 other armored vehicles, and 182 artillery pieces, forcing the latter to withdraw from the territory.”

“Drones have done much to promote Turkey’s rise as a regional power in the year 2020,” Fukuyama concludes, making the Middle East more genuinely multipolar as Ankara neither entirely sides with the Sunni Gulf States or Shiite lines that previously seem to be separating the region into two, but asserting its power by acting with profit.

“It has opposed its fellow Sunni powers, the Gulf States, in Libya; simultaneously sided with Russia by buying the latter’s S-400 air defense system while attacking Russian forces in Syria,” he said, and also selling TB2 drones to Ukraine which might as well be a game-changer in the conflict there as well.

Such use of the combat drones led world militaries to “scrambling to figure out how to defend themselves against drones, and it is not clear who will win the arms race between drones and drone countermeasures.”