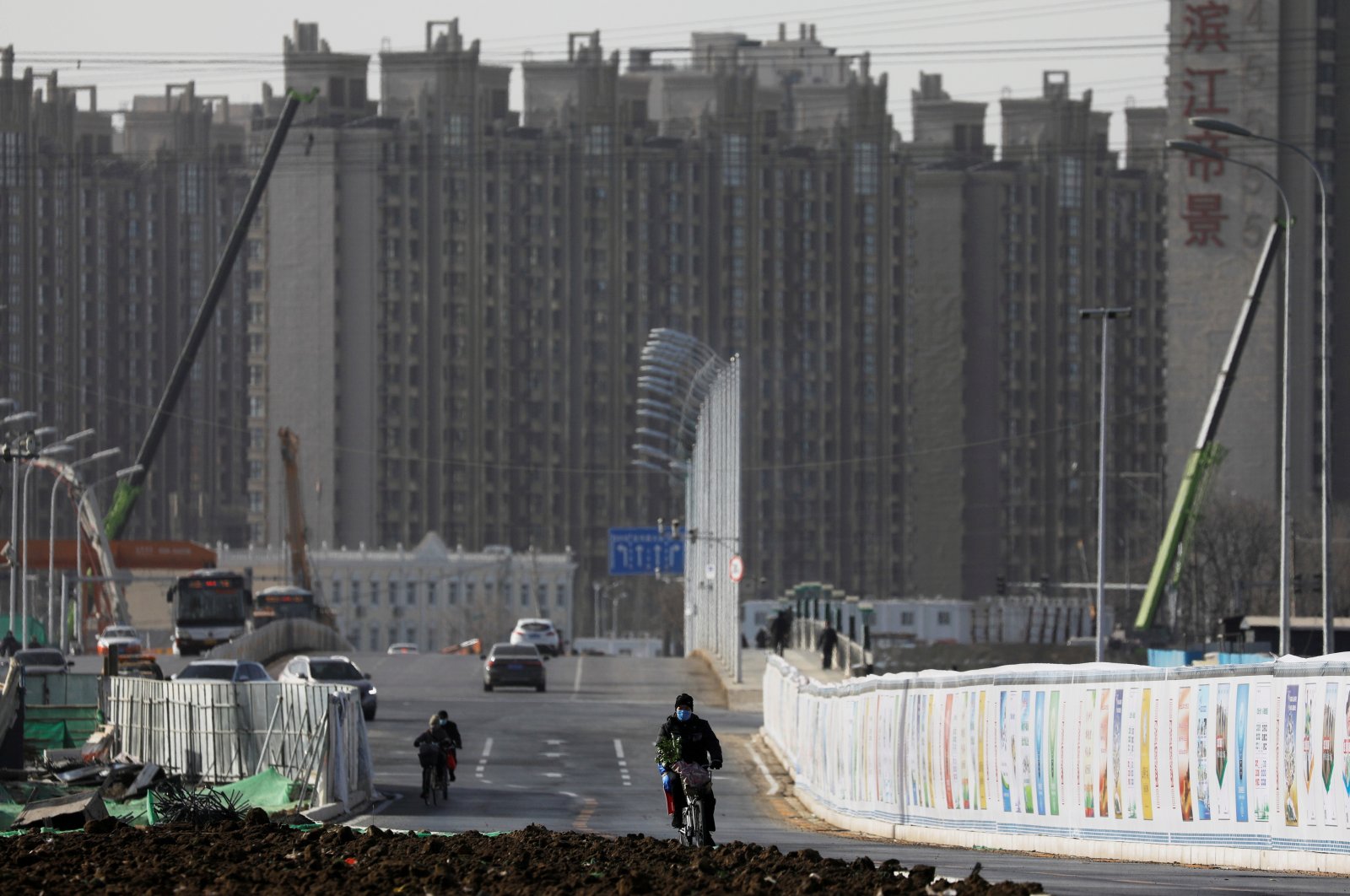 A man rides a bicycle next to a construction site near residential buildings in Beijing, China, Jan. 13, 2021. (Reuters Photo)
by ASSOCIATED PRESS Oct 18, 2021 9:08 am
RECOMMENDED

China's economy hit its slowest pace of growth in a year in the third quarter under pressure from a construction slowdown, power shortages and supply chain bottlenecks, prompting warnings about a possible shock to its trading partners and global financial markets.

The world’s second-largest economy grew by a weaker-than-expected 4.9% over a year ago in the three months ending in September, down from the previous quarter’s 7.9%, government data showed Monday. Factory output, retail sales and investment in construction and other fixed assets all weakened.

Manufacturing has been hampered by official curbs on energy use and shortages of processor chips and other components due to the coronavirus pandemic. Construction, an industry that supports millions of jobs, is slowing as regulators force developers to cut reliance on debt that Chinese leaders worry is dangerously high.

"The domestic economic recovery is still unstable and uneven," said National Bureau of Statistics (NBS) spokesperson Fu Linghui at a briefing in Beijing on Monday.

China's economy had staged an impressive rebound from last year's pandemic slump thanks to effective virus containment and hot overseas demand for the country's manufactured goods. But the recovery has lost steam from the blistering 18.3% growth clocked in the first quarter of this year.

“Ripple effects to the rest of the world could be significant" due to weaker Chinese demand for raw materials, said Mo Ji of Fidelity International in a report. “Even developed markets, including the U.S., would not be immune to a significant tightening in global financial conditions as a result of a negative China growth shock accompanied by financial stress.”

Compared with the previous quarter, the way other major economies are measured, output barely grew in the July-September period, expanding by just 0.2%. That was down from 1.2% in the April-June period and one of the past decade’s weakest quarters.

The slowdown adds to pressure on Beijing to prop up activity by easing borrowing controls and spending more on building public works. But forecasters said even if that happens, activity will weaken before policy changes take effect.

“Growth will slow further,” Louis Kuijs of Oxford Economics said in a report.

Chinese leaders are trying to steer the economy to more sustainable growth based on domestic consumption instead of exports and investment and to reduce financial risk.

Construction and housing sales, an important source of demand for steel, copper and other industrial imports, have slowed since regulators ordered developers to reduce their debt levels.

One of the biggest, Evergrande Group, is struggling to avoid defaulting on $310 billion owed to banks and bondholders. That has fueled fears about other developers, though economists say the threat to global financial markets is small.

Factories in some provinces were ordered to shut down in mid-September to avoid exceeding official goals for energy use and energy intensity, or the amount used per unit of output. Some warned deliveries of goods might be delayed, raising the possibility of shortages of smartphones and other consumer products ahead of the Christmas shopping season.

Factory output barely grew in September, expanding by only 0.05% compared with August. That was down from the 7.3% growth for the first nine months of the year.

Private sector forecasters have cut their growth outlook this year for China, though they still expect about 8%, which would be among the world’s strongest. The ruling Communist Party’s official target is “more than 6%,” which leaves Beijing room to keep its controls in place.

The near-term outlook “remains difficult," said Rajiv Biswas of IHS Markit in a report. Real estate also is suffering from “fears of contagion to some other property developers.”

This year’s economic figures have been exaggerated due to comparison with 2020, when factories and stores were closed to fight the coronavirus.

Output grew by a record 18.3% in the first quarter of 2021, but forecasters said the rebound already was leveling off.

In September, growth in retail spending weakened to 4.4% over a year earlier, down from 16.4% in the first nine months.

Investment in real estate, factories, housing and other fixed assets rose 0.17% in September, down from 7.3% for the first nine months.

The latest figures indicate “the property sector fallout will be a significant drag on growth in the coming quarters,” said Fidelity’s Mo. “Even significant policy easing now, which is still unlikely in our view, will take time to propagate into the real economy.”

Auto sales in the global industry’s biggest market fell 16.5% in September from a year earlier, according to the China Association of Automobile Manufacturers. The group said production was disrupted by shortages of processor chips.

Imports, an indicator of Chinese domestic demand, rose 17.6% in September over a year earlier, but that was about half the previous month’s 33% growth.