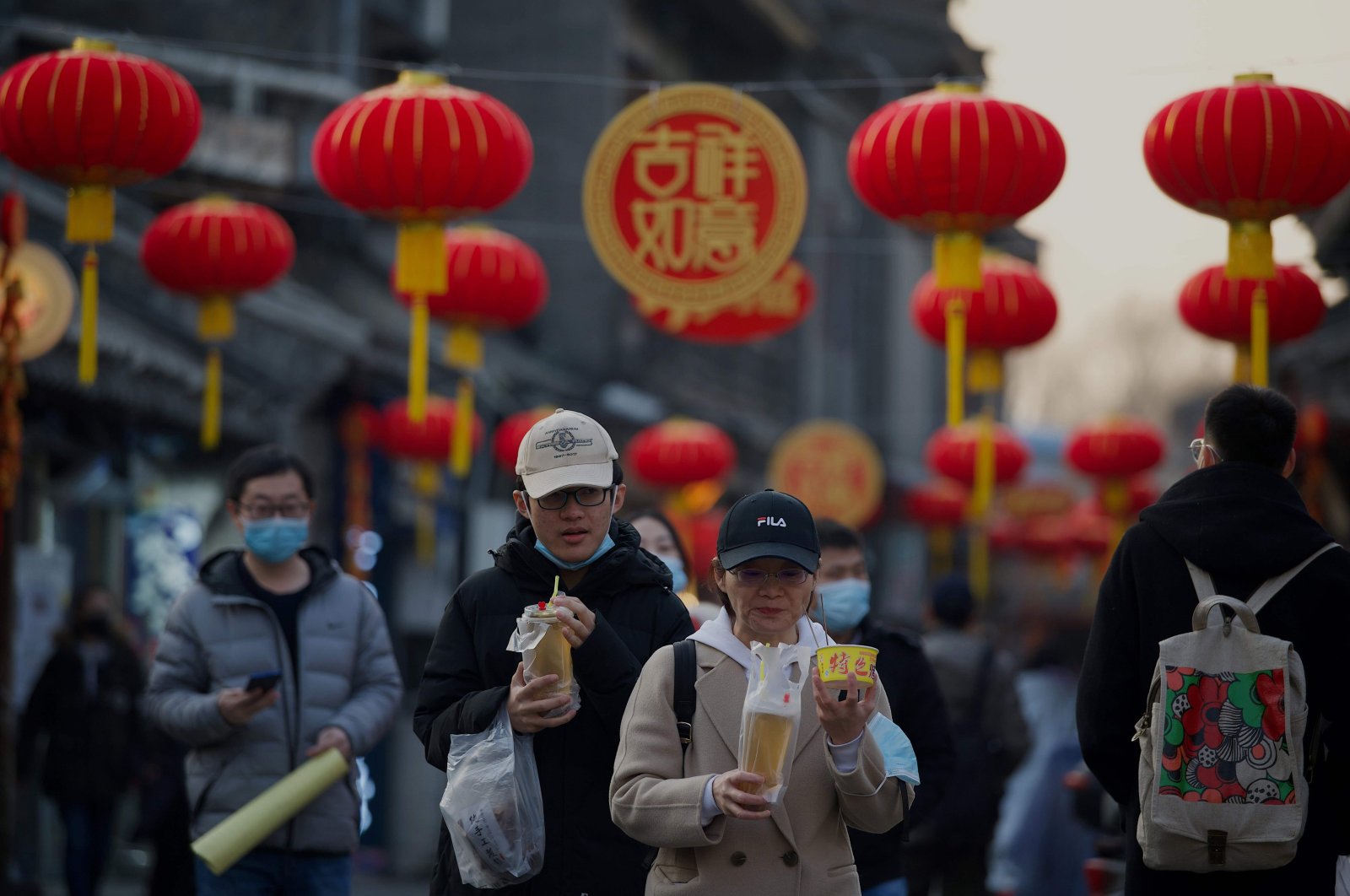 People walk under traditional Chinese lanterns on display ahead of the biggest holiday of the year, the Lunar New Year, Beijing, Feb. 9, 2021. (AFP Photo)
by REUTERS Feb 09, 2021 2:57 pm
RECOMMENDED

A gloomy Lunar New Year awaits China’s hotels and restaurants as they now face reignited travel curbs and government advice to stay home and avoid big gatherings which will deal a great blow to domestic tourism through this year.

The weeklong holiday that begins on Friday traditionally kicks off one of China's biggest spending sprees, surpassing 1 trillion yuan ($155 billion) in 2019, before the coronavirus disruptions, government figures show.

"Our business is barely half of what we usually see before the Lunar New Year," said Lin Haiping, founder of Baheli, a beef hotpot chain with more than 100 outlets in 16 cities.

"We are in a dilemma as we don't want to have too many customers," he added, citing the advice against large gatherings as a reason for avoiding promotional offers to drum up business.

"I'm afraid of having too many people under the current policies."

The tougher measures spawned by recent sporadic outbreaks threaten a hit to transport and tourism during the holiday that could shave as much as 150 billion yuan ($23 billion) from household spending, brokerage CITIC Securities has said.

Infections have recently fallen from a mid-January peak when the daily number of locally transmitted COVID-19 cases hit their highest in more than 10 months.

Such cancellations, for example, have more than halved the cost of flights to duty-free beach destination Sanya on the southern island of Hainan, a mecca for purchases of luxury goods as the pandemic deters Chinese from overseas travel.

Capri Holdings, owner of luxury brands Jimmy Choo and Versace, told analysts it expected strong sales performance from outlets on Hainan, though "not quite as strong as we had all anticipated," thanks to the likely slowdown in travel.

The transport ministry has estimated passenger trips will fall 40% from the 2019 figure during the 40-day spring travel season when millions of migrant workers normally head from cities to homes in the countryside.

Mainland China reported more than 2,000 domestic virus infections in January, but recovery remains on track in the world's second-largest economy, which grew 2.3% on the year in 2020. In the month in question, northern provinces in the country were also battling new clusters of the coronavirus.

That made it the only major economy to dodge a contraction last year, as many nations struggled to rein in the pandemic, which disrupted China's holiday festivities that year, too, thus also sending shockwaves to tourism sectors around the world.

"We are open, but there is no difference with being closed," said Shen Xiaolin, the manager of Qingxi Guesthouse in the eastern province of Zhejiang.

The 17-room boutique hotel has no holiday guests this year, a far cry from previous years when it was booked out the entire week.

As many people opt to stay put in their place of work, some businesses are banking on in-city consumption for some reprieve, but they must still grapple with pressure to limit patrons.

Hotpot chain Haidilao is among the firms turning to technology to ease such headaches.

It has launched an online streaming service offering videoconferencing facilities for diners to feast simultaneously with family and friends in outlets in other cities.

The service is available in 52 restaurants across 41 cities in China, as well as five in Indonesia, Malaysia and Thailand.

"We deliberately chose some outlets in the third- and fourth-tier cities, where many young people ... can't go home this year," said Zhou Zhaocheng, the firm's chief strategy officer.

"We are trying to make people feel they are together, even though they are physically apart."