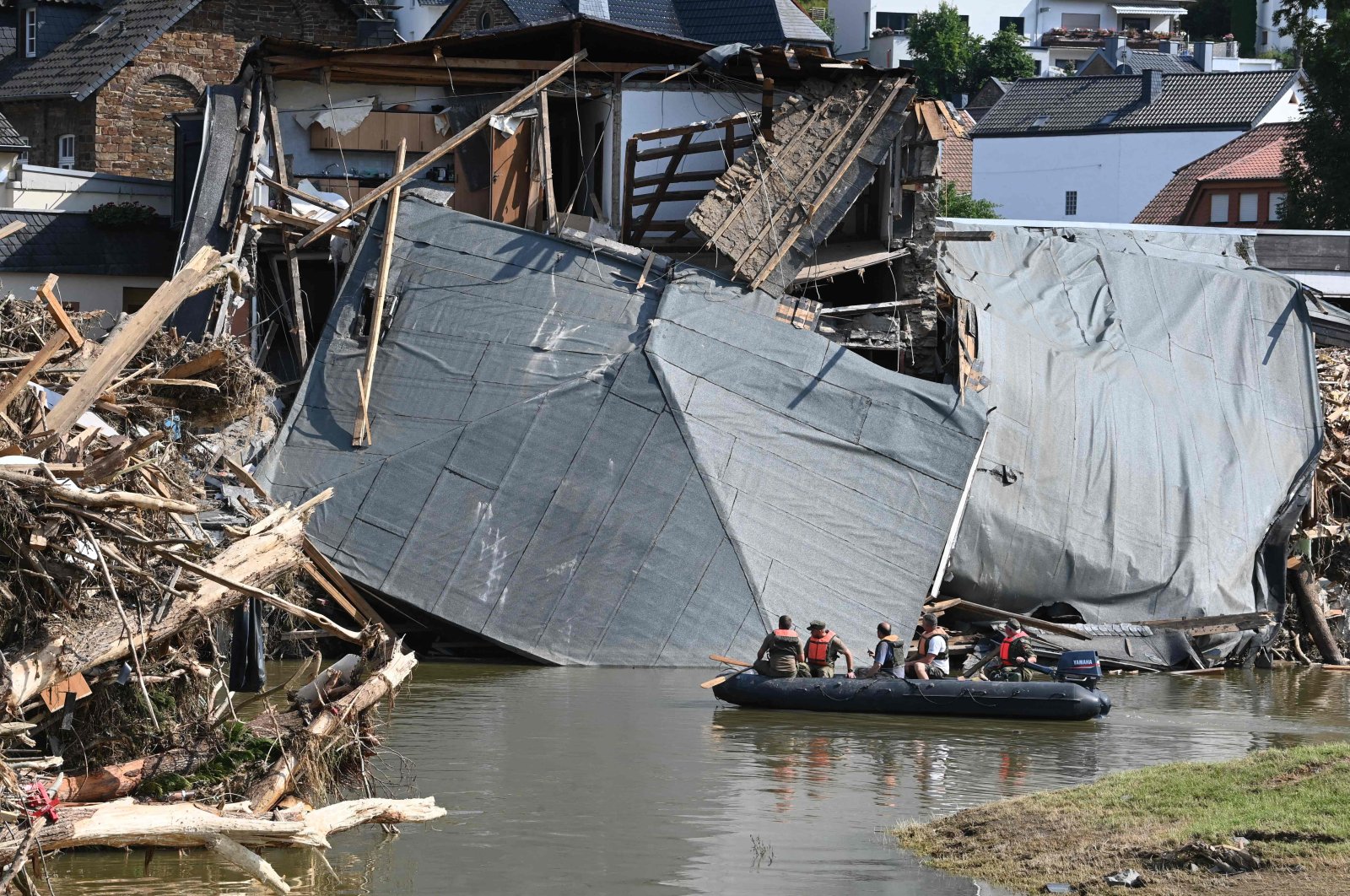 Military personnel floats on a boat on the Ahr river as the roof of a damaged house hangs on the water in Rech, Rhineland-Palatinate, after devastating floods hit the region, western Germany, July 21, 2021. (AFP Photo)
by French Press Agency - AFP Aug 09, 2021 3:50 pm
RECOMMENDED

Eight years after its last full update on climate science, the United Nations published a bombshell of a report Monday that revealed Earth was headed for a catastrophic disaster if its human-induced climate change trajectory was not altered. Around the world, leaders, politicians, scientists, influencers and activists were swift to react to the "terrifying" science report with a mix of horror and hope as the scale and emergency of the situation dawned on many.

Frans Timmermans, the European Union's deputy climate chief said the Intergovernmental Panel on Climate Change's Working Group 1 report, which warned the world is on course to reach 1.5 degrees Celsius of warming around 2030, showed "it's not too late to stem the tide and prevent runaway climate change."

Britain's Boris Johnson, whose government is hosting a crucial climate summit in November, said the assessment "makes for sobering reading."

"I hope today's IPCC report will be a wake-up call for the world to take action now, before we meet in Glasgow in November for the critical COP26 summit," he said.

Former Maldives president Mohamed Nasheed said the 3,500-page assessment confirmed that climate-vulnerable nations were "on the edge of extinction."

Saleemul Huq, director of Dhaka-based environmental think tank ICCCAD, said the IPCC report was "the final warning that bubble of empty promises is about to burst."

He said it showed G20 countries needed to accelerate emissions cuts to ensure their economies are in line with the 1.5C target.

"It's suicidal, and economically irrational to keep procrastinating," said Huq.

Dorothy Guerrero, head of policy at Global Justice Now, said the report was a "terrifying warning of our future unless drastic action is taken."

"There is no denying the science of the climate crisis," she said.

"But policymakers refuse to face up to the fact that it is rooted in economics and a history of colonial exploitation."

Many interpreted the IPCC's assessment as a clarion call to overhaul the fossil-fuel-powered global economy.

"Where can we start? Almost everywhere," said Katherine Hayhoe, chief Scientist for The Nature Conservancy.

"Accelerating the transition to clean energy, reforming our most environmentally damaging activities and recalibrating financial flows to accelerate the economic transition."

Climate wunderkind Greta Thunberg said the report was a "solid (but cautious) summary" of the state of the planet.

"It doesn't tell us what to do," she said on Twitter.

"It is up to us to be brave and take decisions based on the scientific evidence provided in these reports. We can still avoid the worst consequences, but not if we continue like today, and not without treating the crisis like a crisis."

U.N. Secretary-General Antonio Guterres said Monday's report "must sound a death knell" for coal, oil and gas and warned that fossil fuels were destroying the planet.

In his most frontal assault yet on the fossil fuel industry that powers the global economy, Guterres said "immediate action" was needed to decarbonize the energy sector.

"The alarm bells are deafening, and the evidence is irrefutable: greenhouse gas emissions from fossil fuel burning and deforestation are choking our planet and putting billions of people at immediate risk," said Guterres.

Guterres called on world leaders to ensure the COP26 climate summit in November leads to ramped-up emissions cuts and finance to countries already dealing with the fallout from global heating.

"If we combine forces now, we can avert climate catastrophe," he said.

"But, as today's report makes clear, there is no time for delay and no room for excuses."

Greenpeace was even more direct.