Evercade provides hope for the future of retro gaming 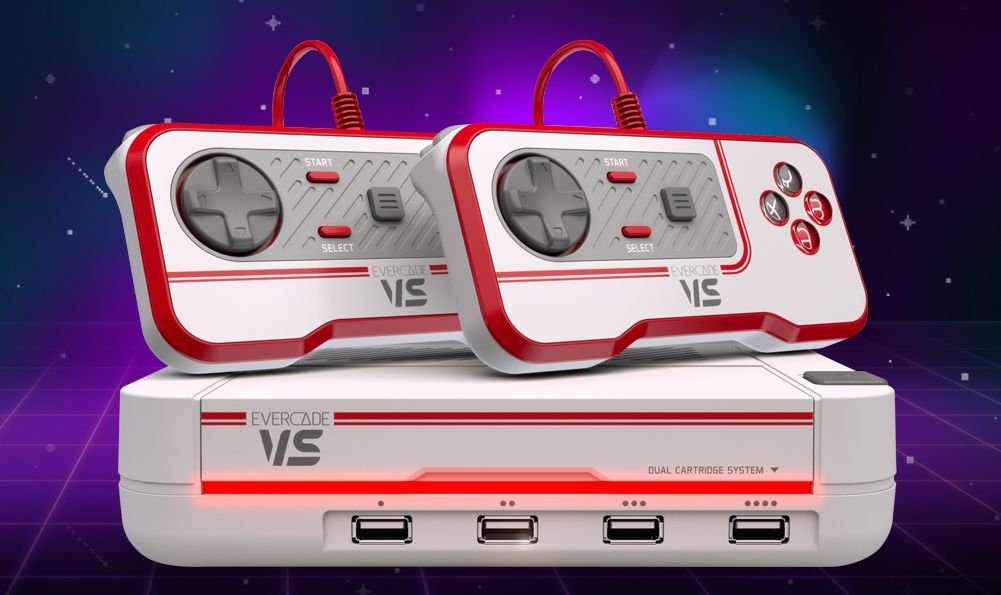 The upcoming Evercade VS home console. (Photo courtesy of Blaze Entertainment)
by Emre Başaran
May 31, 2021 8:57 am

I’ve been closely following Evercade, the first totally legal way to enjoy some retro titles, after the Britain-based company entered the retro gaming market with their awesome handheld featuring officially licensed games. Now that they are going to release a home console too, the Evercade VS, my hopes are high, not only for the Evercade brand but also for the future of retro gaming

Everyone into the retro gaming scene knows this well-known secret: It is all about the “ROMs.”

The word itself stems from the fact that the game cartridges back in the 1980s and 1990s were essentially physical read-only memories – or ROMs for short – that were installed on little printed circuit boards – or PCBs for short. But nowadays, the word ROM is basically a well-known slang for digital files containing games.

But there’s a catch: 99% of all ROMs are basically illegal if it’s not abandonware or you haven’t dumped your physical cartridge or CD yourself to play the game on an emulator or a retro handheld.

To be honest, ROMs are also crucial for game preservation. Let me give you an example.

As a football-savvy kid, I loved the FIFA series. For example, FIFA 99 had a cutscene that showed my team Galatasaray’s legendary home pitch Ali Sami Yen. Whenever I saw the stadium on our Sony Trinitron CRT TV, I had goosebumps. It was such a novelty for the time.

But how would you play FIFA 99 today, in 2021? EA Sports does not sell it anywhere, not on PlayStation Store, not on Microsoft's Xbox Store; you cannot find it on Steam or anywhere else, not even EA's own marketplace, Origin. The company best known for its greed for money is busy milking FIFA 21 fans until the last nickel and dime in their parents’ pockets for virtual FUT card packs.

Do you have the FIFA 99 physical disc, for PlayStation, maybe? Great, you can enjoy it a few more times before it dies due to two decades-strong disc rot if you haven’t already dumped it yourself to play it on an unofficial emulator on your PC or Android device, or performed a jailbreak on your PlayStation Vita to play it, or bought a Chinese-made retro handheld that supports PlayStation games such as Anbernic’s RG350. But what if your mom gave it away to a distant cousin and you cannot find a physical copy anywhere? Or, you’ve found one but the seller asks for 500 fricking dollars. What are you going to do?

For most retro titles, ROMs are – unfortunately – the only option. I am genuinely against piracy because it harms both publishers and customers – as game makers cannot live on bread alone to continue creating more titles. That’s why I find Nintendo’s move to bring Nintendo Entertainment System (NES) and Super Nintendo Entertainment System (SNES) titles to Switch with its online subscription service useful. At least there is now a way to legally play scores of retro titles with additional features such as online gameplay, albeit with the now-infamous Switch lag, which Nintendo refuses to properly solve for some reason. But that’s only Nintendo bringing back some retro titles, which is also being repeated with the relatively new NES and SNES Classic Edition consoles, which are not based on real hardware but emulation, and that come with HDMI support. Sony and Sega are also following suit with their PlayStation Classic and Sega Mega Drive Mini, respectively.

For many other retro consoles and many titles though, this is the harsh reality we’re faced with: If companies refuse to sell their old games digitally and legally – i.e. they are essentially abandoning their previous titles – they leave retro gamers with no other choice. And, if you’re a retro gamer, you must know that retro gaming is, for many people in their late 20s to their early 50s, much much more than playing antiquated games to pass time. It is basically a ritual in which we try our best to not only mentally but also physically go back to our childhood, where our most cherished memories are hidden.

Do you know why retro gamers like me also choose to play old games alongside technically and graphically much more advanced modern games? Because retro gaming is the closest thing to time travel we have. If you listen to an old song, it gives you nostalgic vibes. A perfume smell that you were accustomed to as a kid also hits you strongly. If you watch Titanic, for example, you may go back in time mentally. But pay close attention, all these activities appeal to one or maybe two of your senses. But retro gaming? It appeals to all your senses except taste – infact you can also add some childhood favorite snacks for a complete experience.

Imagine sitting on the floor in front of an old CRT, with a wired controller in your hand, smashing buttons during a, say, Street Fighter session. The soundtrack appeals to your hearing sense, the CRT’s nostalgic visuals appeal to your sight, and the exact same tactile feedback from the gamepad to your sense of touch. And even, the smell of an old school cartridge’s plastic can be perceived too if you are that committed to going back in time.

What I’m trying to say is, we all – secretly or openly – yearn for the good ol’ days. And retro gaming is much more than just retro gaming: Again, it is the closest thing to time travel we have.

And, Evercade takes this time travel ritual to further distances – to give you a stronger sense of nostalgia – and, maybe too far-fetched to say at this point but, to kind of save the future of retro gaming, at least from a legal perspective.

When Blaze Entertainment, the United Kingdom-based company announced its Evercade handheld last year, I was fascinated.

Because it seemed to bring back many aspects of nostalgia and good old activities concerning gaming. First, it was the first-ever retro handheld with support for its own proprietary physical cartridges. Normally, “proprietary” is arguably the most hated word in the tech scene. For example, if a company releases a phone or another gadget with its own proprietary charging cable, it’s a major annoyance as replacements are hard to find and expensive to buy. If you own the original PS Vita, for instance, you must be so careful to not damage its proprietary charging cable or its proprietary cartridges that cost an arm and leg.

Thankfully, tech companies have largely abandoned this greedy habit after countless backlash, and most of them have embraced the universal USB-C standard, or the less popular and still annoying but at least widespread choice, the micro USB. Apple is also criticized day and night for its insistence on its proprietary Lightning connector in iPhones, but at least Lightning cables are everywhere to be found and bought for relatively cheaper prices.

But in this example, “proprietary” makes sense because Evercade does not claim to support physical NES, SNES, or Sega Mega Drive cartridges, or any other already existing console; like Hyperkin did with its Retron, which supports many types of physical game cartridges. Evercade has its own proprietary cartridges because it’s a brand new platform that has its own game collections, all of which are officially licensed. So, with Evercade, you don’t have to hunt for impossible-to-find and astronomically expensive cartridges that are obsessively sought after by collectors and are at least 20 years old to legally play retro games.

When you buy an Evercade, you will also need to buy its cartridges which contain many good titles each. Yes, I totally agree that Evercade sure is a pricey idea. But retro gaming is a very niche hobby that needs to grow and have more depth to it, and one that should go beyond downloading ROMs from shady websites. I totally respect people who choose to go the budget-focused route – if they are not distributing ROMs for financial gain and are only playing the games themselves out of a lack of available legal options – but also there are people who really do not feel at peace when the product they are enjoying is not paid for.

That’s where Evercade steps in. It gives retro gamers the ability to support their favorite game makers both in terms of reputation and income – and also to enjoy the long-forgotten activities such as reading the paper manual of a physical game that comes in its own box. Digitizing everything killed off some of the passion in us, right ... Back in the day, we used to read the manual carefully first to get a grasp of the game, and to feel the excitement boiling within us before putting in the cartridge to enjoy the glorious 8-bit and 16-bit content.

Besides, the company recently also announced Evercade VS, a home console with dual cartridge slots, HDMI support and that can let up to four people enjoy a good old couch co-op, rather than playing online over a usually not-so-reliable game server. Seems like a very fun time for a family, roommates and hopefully for friends to get together and play together provided that this tiring, depressing COVID-19 pandemic is over.

What Evercade holds in store for the future of retro gaming

What gets me most excited about the prospect of a game console – or, as the home console version is underway too, a retro gaming ecosystem – such as Evercade is its potential to really help once-mammoth game companies that are financially struggling these days.

The console – both its handheld version and the upcoming home console use the same type of cartridge – supports games originally released for the Atari 2600, the Atari 7800, the Atari Lynx, the Intellivision, the NES, the SNES, and the Sega Mega Drive, which is known as Sega Genesis in North America.

Its future iterations – or maybe its current hardware is strong enough too, I don’t have the technical expertise, to be honest – can also expand to other platforms, such as Game Boy Advance, PlayStation Portable, and PSX and many others.

As I said in a previous column on the privacy fight between Facebook and Apple, many things designed by humans end up organized in some form, in something or at some place. Shops come together in malls, apps come together in app stores, and countless online platforms otherwise operating in their own websites come together in social media. Maybe Evercade will appeal to the retro gaming niche so much and its hardware will become so popular that it may end up being the (un)official home to play retro games legally – and in physical format as they were originally intended.

I really hope that Evercade takes its steps carefully in its journey to a potentially huge slice of the retro gaming pie and that it provides us gamers a proper, legal way to enjoy retro titles with peace of mind and with actual hardware and other physical goodies.

By the way, I would love to test and review both the handheld version and the upcoming home console, but as Evercade is sold in select countries, and international shipping is prone to many potential problems concerning customs aside from the fact that it is too pricey, I haven’t been able to buy it and play yet.

I also hope the company would consider coming to Turkey with a regional pricing strategy in the future. Considering all the features it promises, I am hopeful that Evercade will take retro gaming to distances never before considered feasible. I hope they make their moves right, and we will enjoy more retro goodies.