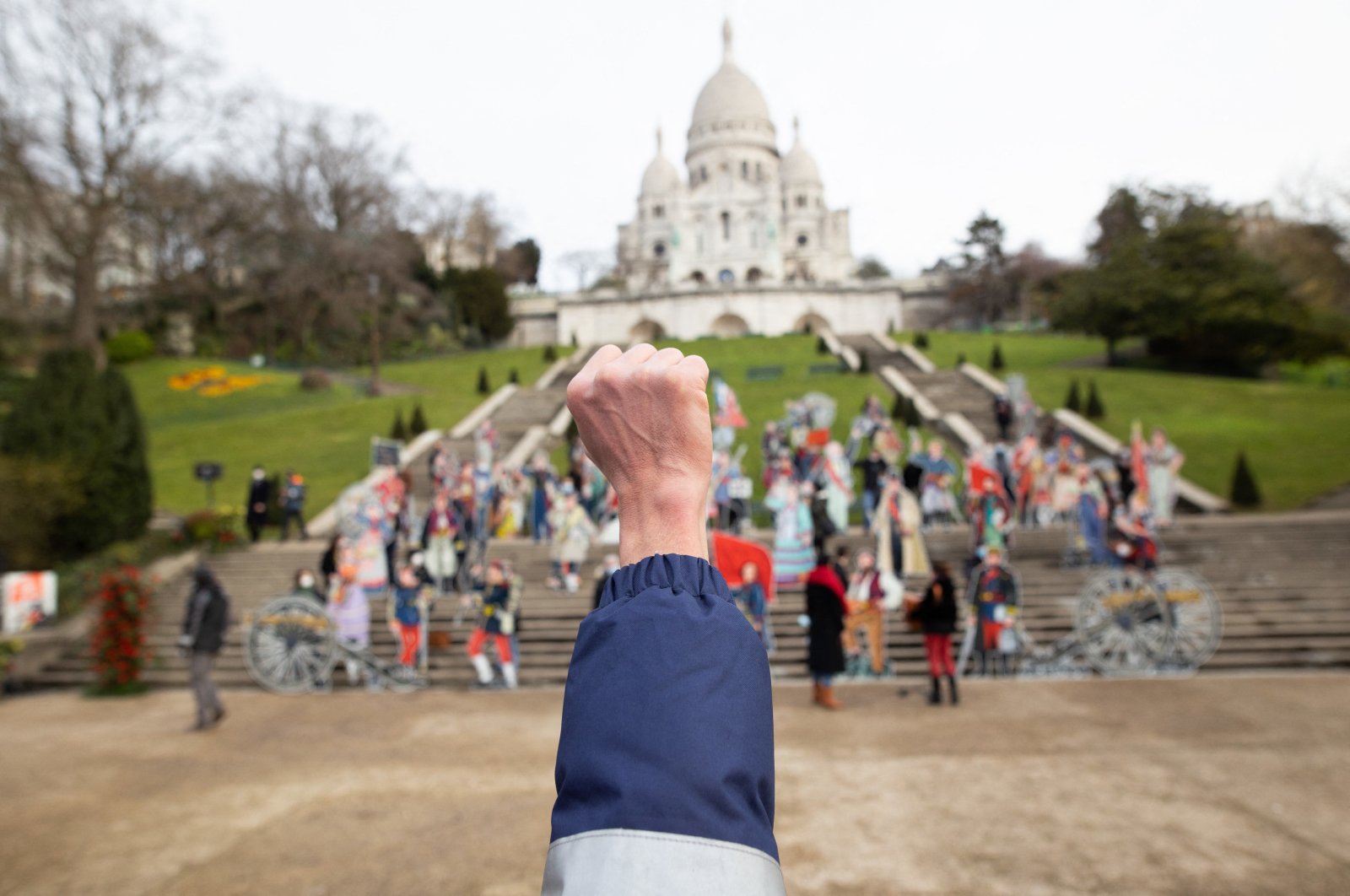 A man raises his fist during the celebration of the 150 year anniversary of La Commune de Paris at the Louise Michel Square next to the Basilica Sacre Coeur, in Paris, France, March 18, 2020. (Photo by Raphael Lafargue/abacapress.com via Reuters)
by French Press Agency - AFP
Mar 23, 2021 12:45 pm

A radicalized people's power experiment amid Prussian occupation in the French capital of Paris 150 years ago continues to divide the country's splintered political scene and serve as a source of inspiration amid rising xenophobic and far-right tendencies.

The city of Paris has launched two months of events commemorating the 1871 Paris Commune, an uprising against a conservative government by working-class Parisians that was brutally crushed after 72 days in one of the lesser-known chapters in French history.

But its memory still looms large in left-wing rebellions worldwide and in Paris with the towering Sacre-Coeur Basilica in Montmartre, built by the victors on the ruins of the crushed Commune.

The revolt erupted after the Franco-Prussian War and ended in a bloodbath, with government troops massacring between 6,000 to 20,000 people during "la semaine sanglante" (bloody week) that ended the Parisians' brief flirtation with self-rule.

But with public sympathy still divided been the "Communards" and the "Versaillais" government, trying to rally Parisians around a shared reading of what Karl Marx described as "France's civil war" is proving difficult.

An explanatory video about the Commune tweeted by Paris City Hall last week noted that both the government and the Communards, who killed about 100 hostages in the dying days of the standoff, had blood on their hands.

But the administration of Hidalgo, a Socialist, was nonetheless accused of bias for emphasizing the egalitarian ideals of the Commune.

One Twitter user reacted by praising Adolphe Thiers, the leader who quashed the Commune, as a "national hero."

But for another reader, he was "a traitor and a murderer" who if alive today would be hauled before the International Criminal Court (ICC).

The subject also prompted an acrimonious debate last month at the City Hall, with the right accusing the left of glorifying what councillor Antoine Beauquier called "a sad time ... in which Parisians killed other Parisians."

For the historian Mathilde Larrere, the row showed how the memory of the Commune remains deeply divisive.

The Commune began on March 18, 1871, when Thiers, whose government had a strong royalist faction, sent troops to remove cannons on the hill of Montmartre that had been used to defend the city during a four-month Prussian siege.

Anti-monarchist Parisians rushed to repel the troops, sparking clashes that resulted in the deaths of two generals and prompting the government to flee to Versailles, the former seat of French kings.

Six days later the insurgents won municipal elections in Paris and set up a system of self-government that was hailed by Marx and Russian Bolshevik leader Vladimir Lenin as a model for a proletarian revolution.

Some elements of the Commune's manifesto are seen as being extraordinarily progressive for the time.

"Many of the values that we hold dear today underpinned those of the Commune," said Laurence Patrice, the Communist councilor in charge of the commemorations at the City of Paris, pointing to measures such as equal pay for men and women, free schooling and the naturalization of foreigners.

But for many in 19th-century France, the Communards were outlaws who burnt down key monuments, including Paris City Hall, and were fiercely anti-clerical.

Religious teaching was banned and priests were killed, including the archbishop of Paris, who was taken hostage and murdered in the dying days of the Commune.

"Presenting the Commune as an idyllic period is a lie, it was an extremely bloody period, on both sides," Beauquier, a conservative city councilor, told Agence France-Presse (AFP).

"There are no goodies on one side and baddies on the other."

He and other right-wing lawmakers accuse Hidalgo, who is mulling a run for the French presidency next year, of using the memory of the Commune to try to unite a fractured left.

For Larrere, an expert on 19th-century history, where the Commune was truly revolutionary was in the proportion of lawmakers that were drawn from the working classes.

"Never in French history were there so many workers in a representative assembly," she told AFP.

Beyond the political arena, the much-mythologized Communards continue to inspire, as seen during the yellow vest protest movement of 2018 and 2019.

Among their demands were the right for citizens to propose laws or dismiss elected representatives – a form of participatory democracy that was in discussion during the Commune.

For Pierre Vesperini, a historian writing in Philosophie magazine, the yellow vests were the "direct descendants of the Parisians of 1871."

"Then as now, we're dealing with an uprising of misery – we want to live in dignity – and of political ethics – we want more democracy," he wrote.