Travels of a solo Pakistani girl: Şanlıurfa and Ankara 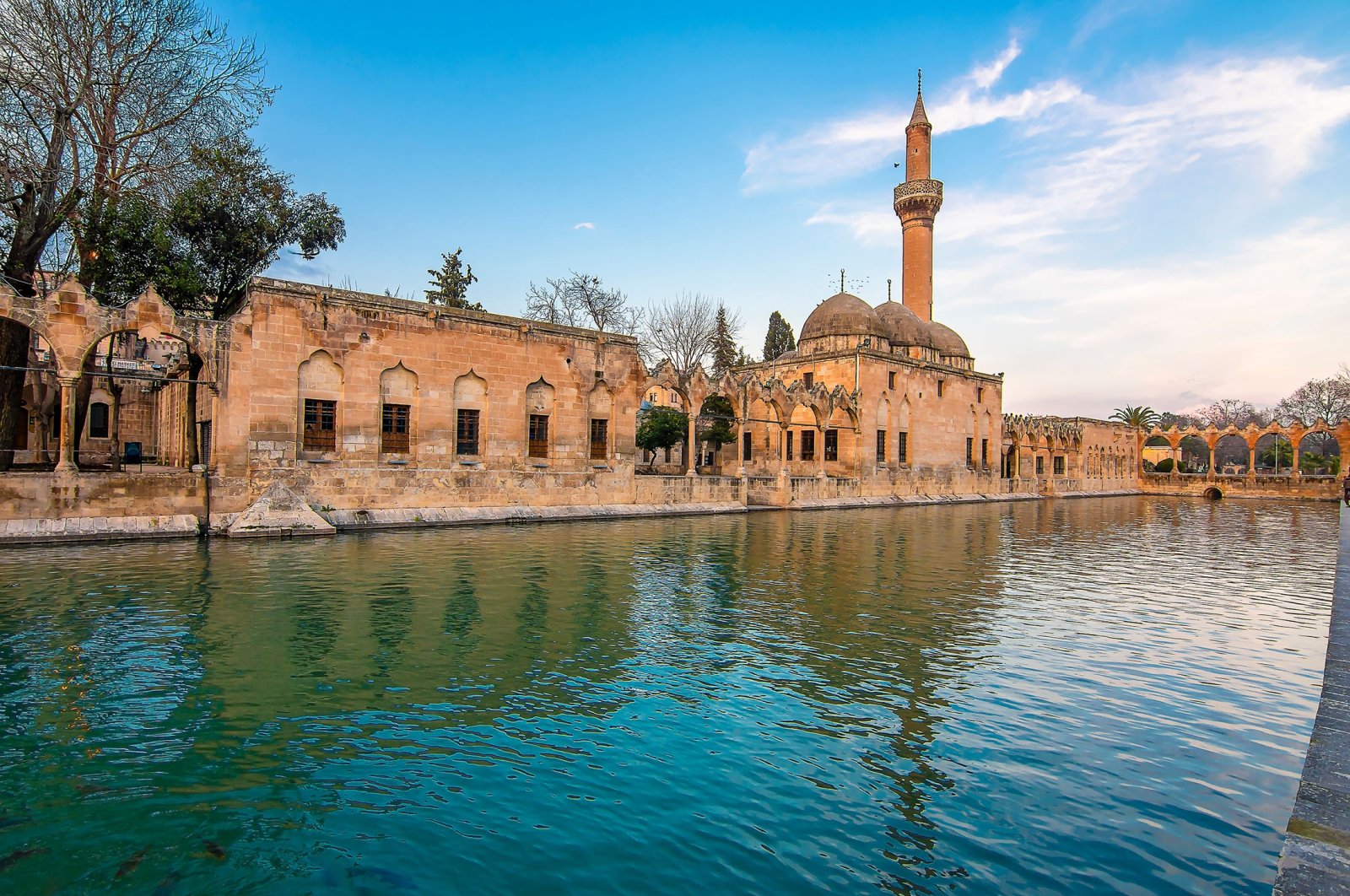 Making my way from the birthplace of the Prophet Abraham somewhere east of the Euphrates, to rediscovering a famous dessert in the heart of an Ankara neighborhood

My next stop was the southeastern city of Şanlıurfa. At the station in Mardin, I bought a ticket on the first bus out and, three hours later, was in a cab going to my new hotel.

Located in the downtown area, it was within walking distance of the city’s most historical landmarks. Quickly freshening up, I offered the afternoon prayer and then headed to a nearby restaurant, Cevahir Han, for lunch. It is a good place to stop by if you’re in the area, with extensive outdoor seating and an indoor dining area reminiscent of a cave dwelling. I had fried miniature mantı (traditional Turkish dumplings) with yogurt, followed by şıllık, a typical Şanlıurfa dessert consisting of crepes soaked in mildly sweet sugar syrup and topped with finely crushed nuts. I finished off the meal with a cup of thick menengiç coffee; less bitter than its regular counterpart, it is served with a sprinkling of ground pistachio on top and has a unique taste.

Then, it was time to head to Balıklıgöl, a sacred pool in the heart of the old city.

Of prophets and miracles

Religious history tells us that King Nimrod sought to punish the Prophet Abraham for the latter’s war against idolatry by casting him into an enormous pit of fire, but God saved Abraham by cooling the flames and the prophet emerged from it unscathed.

According to legend, the site of Balıklıgöl in Şanliurfa is where this happened. The large pool at the heart of the complex is said to have been the pit that was dug for the fire, while the logs of wood feeding it turned into the scores of carp that swim in these waters today.

To reach the site, I had to take a 15-minute walk through a rather humble residential area in the older part of the city. The main street running through it was fairly wide, with shops lining both sides. Children playing games spilled out onto the pavement, elderly men and women stood chatting as they went about their chores, stray cats lounged about on doorsteps, and teenage boys huddling in small groups laughed at each other’s jokes.

Every now and then I would pass by a smaller side street that disappeared between the closely packed houses; it was tempting to go down them, but I wanted to wrap up my visit to the Balıklıgöl before evening prayers were called. Something about walking through this part of town drew out nostalgia, making me reminisce about my childhood summers in Pakistan's city Lahore. It was strange how those memories in another ancient city were evoked with this passage through a secluded Turkish neighborhood.

At the bottom of the street, a panoramic view of the Balıklıgöl complex opened up before me, framed against the backdrop of a craggy old hill on which stood Şanlıurfa Castle. From this vantage point, I could just make out the two towering pillars from which Nimrod’s soldiers were said to have tied Abraham and catapulted him into the fire.

The aforementioned sacred pool of water is fairly large, lined by stone construction on three sides and part of a promenade on the fourth. Here, you’ll find a few vendors selling feed for the carp, for a lira or two. These are probably the most well-fed fish in all of Turkey! They are also considered sacred and it is forbidden to try and catch them.

There are multiple buildings within the complex, including Rizvaniye Mosque, Halil-ur Rahman Mosque and Mevlidi Halil Mosque. The latter, also known as the Dergah, was built at the site of what had been a pagan temple in the third century B.C. It was subsequently converted into a synagogue and then a church, before an Ottoman statesperson, Muhammad Salih Pasha, turned it into a mosque in 1523. Within the Dergah complex also lies a partially submerged cave, believed to be the birthplace of the Prophet Abraham. It is considered a holy site and is visited by devotees from all over.

A leisurely walk through the entire place takes no more than a couple of hours, and you have the option of sitting at one of several open-air cafes lying beneath tall trees for a quick refreshment.

Originally, I had planned to spend the following day on a tour of the ancient town of Halfeti and the Rumkale fortress on the Euphrates, before heading toward Alanya. But the back injury I had sustained in Mardin seemed to be worsening and I knew I needed to see a doctor. Going over my options, I decided the best course of action would be to fly to Ankara where I would be able to count on help from an old family friend. So, the next morning I was on the first plane out.

To the Turkish capital once again

I had previously visited Ankara for a few hours during a transit when colleagues from a Turkish think tank had very kindly shown us around the city. We had visited the major landmarks and the downtown area. But what I enjoyed recalling the most was my introduction to the Turkish dessert known as aşure, or Noah’s pudding. A delightful concoction of grains, pulses and dried fruit, nestled in a semi-thick liquid flavored with rosewater and sprinkled with pomegranate seeds, it is traditionally served on the 10th day of the Islamic calendar month of Muharram.

Arriving at the airport, I went straight to the shuttle bus headed to the city center; it costs TL 11 ($1.28), so you have to be prepared with change. While waiting for the bus to depart, I quickly booked a room at a hotel in the very central Kızılay neighborhood. Being unfamiliar with the local geography, I did not realize at the time that this would turn out to be an excellent choice of location for several reasons. The gentleman seated next to me disembarked at the same stop; he offered to help me get a cab and explained to the driver exactly where I needed to go. Within 10 minutes, I had checked in at my hotel.

A doctor’s appointment had been scheduled for the early afternoon; I had just enough time to freshen up and walk to the hospital, which was less than 10 minutes away on foot. As I left, the light rain that had begun a short while ago quickly turned into a deluge and the water rose to ankle level, making it impossible to cross the street without getting drenched. Nevertheless, I made it in time for my appointment. The entire visit took no more than half an hour. To my relief, the doctor advised me that the injury, while fairly severe, was not of deep concern. However, it would take several weeks to fully heal, and I needed to take things easy. I got the painkillers he had prescribed and headed back to where I was staying. By this time, the sun had come out again and was shining brightly with not a dark cloud in the sky, my introduction to Ankara’s temperamental weather.

My hotel was located at the heart of a street full of restaurants, each offering fare more inviting than the last. Having eaten only Turkish food for several days, I was pleasantly surprised to come across a Chinese restaurant and decided to go in for lunch. The food was delicious and spicy enough to appease my Pakistani tastebuds; I polished off a fairly large meal of soup, dumplings and kung pao chicken with absolute relish, before going for a stroll around the neighborhood. I soon realized this was the same district I had passed through on my first visit to Ankara. But try as I might, I could not remember the name of the place where I had tried the aşure.

Taking a ‘break from my vacation’

The next day, I woke up and realized I had nothing scheduled; it was a bonus day of sorts, so I decided to explore this particular part of town in a little more detail. This led to the discovery of several hip cafes and coffee shops, great stores with clothing, shoes and accessories, confectionery shops and even pet stores! It was a good way to spend a casual afternoon.

A few hours later, I was walking down the road with my purchases in hand, when something wonderful happened: I stumbled across the very same cafe where I had had my first bowl of aşure! This, I now knew, was the Elizinn patisserie. My excitement over something this simple might seem strange. Suffice it to say, it was a good surprise to see a memory from years ago manifest itself when I had no idea I would ever see it again; I wouldn’t even have been in Ankara had it not been for that fall in Mardin.

Marching inside, I sat at a table and, after a perusal of their ample menu, decided on the chicken and mushroom curry; thick and creamy, it was served with rice and wedge fries. As I ate, my eyes roved over the abundant display of beautifully decorated desserts, beckoning customers from behind their glass case. Once I had finished, I asked for a serving of aşure to take away and returned to my hotel room just in time before a light rain began. Later that night, I slowly opened up the package and took my first spoonful, half afraid it would not live up to memory. I need not have worried, however, because it was the same delightful dessert I had fallen in love with; it had the perfect ratio of each ingredient submerged in a pudding lighter than air. To be fair, I had actually tried aşure when I first landed in Istanbul several days earlier, at a famed local patisserie, no less; but that had been a huge disappointment, overly sweet and unbearably gelatinous.

Ankara, unplanned and unexpected, had turned out to be a welcome detour. Sometimes, the best-laid plans go awry and it isn’t all bad. With the last of my dessert down the hatch, I made myself some tea and settled into bed to plan my trip the next day to the gorgeous coastal town of Kaş.