Travels of a solo Pakistani girl: The two Hagia Sophias 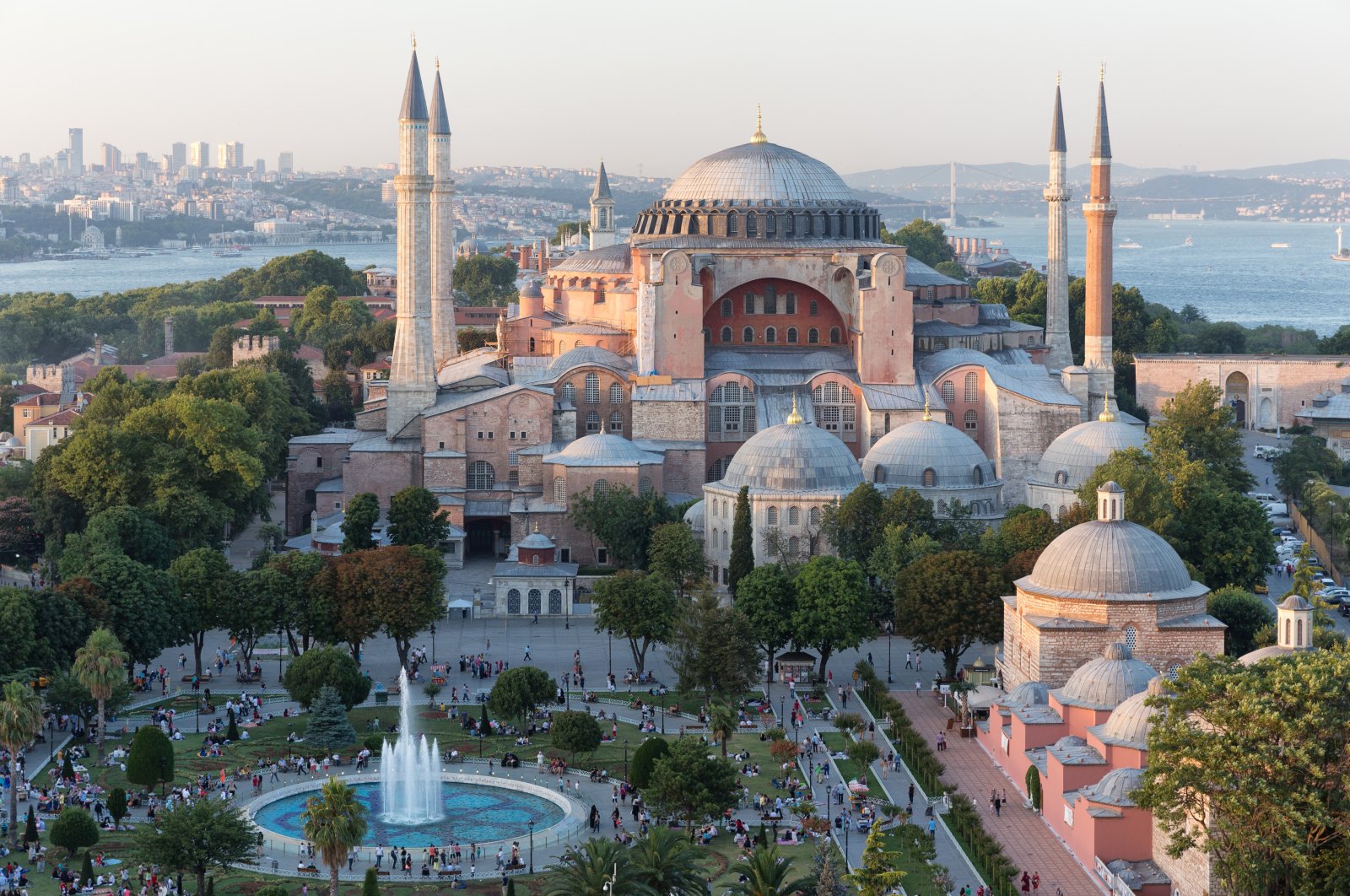 One day is never enough for Istanbul.

Having completed my tour of Topkapı Palace, I went out in search of a restaurant recommended on Trip Advisor that was a 10-minute walk from the hippodrome. This took me through the Kumkapı neighborhood of Istanbul's Fatih district, up and down steep streets lined with colorful houses, and the Marmara sea popping in and out of view.

As it happened, the place I wanted to lunch at was closed. Luckily, another restaurant a few doors down was open, and I ventured in. At the aptly named Istanbul Anatolian Cuisine, I had a light but tasty meal of grape leaf dolma and hummus. While I ate, I chatted with the owner, who was from Diyarbakır. We discussed how the restaurant business had been impacted by the pandemic economy. I got good advice on what historical sights to see in Diyarbakır, where I was planning to go next week. His cat, Jessica, came by from time to time while they served me complimentary baklava and tea.

Done with lunch, I left. At the end of the street, I stumbled upon a pleasant surprise in the form of a building I had planned to visit, the little Hagia Sophia. About as old as its larger namesake, it was converted to a mosque around the year 1500. The courtyard next to it, once a madrassa (an educational institution), is now a shady tea garden. The surrounding neighborhood is lined with private residences, boutique hotels and some nice cafes; it is good for a leisurely walk. I meandered slowly through the streets, taking an exploratory detour every now and then before making it back to my hotel in time for curfew.

The next morning, just before sunrise, I left the hotel for a quiet walk around the city. I decided to go see the Galata Tower. Early morning worshippers were making their way home from prayers. Following the tramway path all the way down to Eminönü where the ferries dock, I crossed the bridge. A hazy outline of the city was emerging above the water, and you could make out the shapes of one or two landmarks. Just off the bridge to the left, I stopped at Has Simit Evi for coffee and a quick bite to eat. Slowly chewing on a cheese bun, I watched the baker removing freshly baked simit, hot from the oven as the entire place filled up with the aroma of baked goods and the gentle sound of the tram whistling in the background.

With a welcome hit of caffeine, I continued toward the tower. I had my first experience of the day with Istanbul’s steep streets. The space between the windows above me was filled with drying laundry. Some proudly declared the neighborhood’s allegiance to a favorite football team in the form of huge flags. Finally, I came upon the Galata Tower. Nestled tall and imposing amid dozen buildings, it lay framed against the sunlight. I took several pictures, glad to have caught it without hoards of people milling around its base. Then, it was time to retrace my steps. The last of my bread was fed to seagulls at the bridge, and I made it to the hotel in time for breakfast.

Later that morning, I met my guide at Hagia Sophia Grand Mosque. Although it was fairly early, the grand hall had already filled up with tourists sitting or strolling on the thick green carpet inside. The cacophony of voices in a hundred different languages did not dim my first experience inside one of the world’s greatest monuments. After my guide left, I spent the longest time going over the walls and ceilings, trying to absorb every detail in-depth: the mosaics whose gold had not yet dulled, the towering stone pillars, the cascading chandeliers, and the enormous black discs mounted up high with the names in gold of Allah, the Prophet Muhammad and the four caliphs. It was a heady experience. I only regretted that the upper halls were closed for renovation and inaccessible to tourists.

The Byzantine Emperor Constantius had commissioned the Hagia Sophia as a church. It had undergone several reconstructions over the centuries and many changes in function. For the first 900 years, it was the central church of the Greek Orthodox faith under Byzantine rule. It passed briefly under Roman control and, two centuries later, it was renovated as a mosque after Mehmed the Conqueror’s capture of Constantinople. It was then that the minarets were added to the building. In 1934, it was declared a museum by the father of the modern Turkish republic, Mustafa Kemal Atatürk. And in July 2020, President Recep Tayyip Erdoğan turned it into a mosque once again. Reflecting on this chequered history, I tried to imagine what it had been like as a museum. I wondered how local Istanbulites felt about the change.

When the adhan was called out for the noon prayer, attendants politely asked tourists to move toward the rear half of the main hall as worshippers gathered toward the front. I followed other women to the section screened off for female worshippers. It was lovely that my first congregational prayer in Turkey was at Hagia Sophia.

When prayers concluded, I headed outside to meet my guide for the third tour I had booked as part of the package for the Basilica Cistern. I was advised, however, that the Cistern was closed indefinitely for repairs, and was offered a tour of the Hippodrome instead. Unfortunately, this information had not been shared at the time I made my reservation. While disappointed that I would miss a significant sight, I had no choice. Afterward, I headed back to the hotel for a late nap and, that evening I had dinner at one of the lovely cafes dotting the surrounding streets. Then, it was off once again to Hagia Sophia for isha (night prayer). My main objective was to visit the mosque at a quieter time when there were unlikely to be any tourists, and the effort was rewarded. Though I had forgotten to bring my hijab, a vending machine outside provided a disposable gown with an attached covering for just TL 20 ($2.30).

This time, I found the domed hall hushed, largely empty, which made it seem bigger than before and suffused in the golden light of so many chandeliers. After prayers ended, I stayed for some time, simply sitting to one side and collecting my thoughts. It was a good exercise, and I felt refreshed as I made the short trek back to my room for the night.

The next morning I woke up well before dawn. Slowly emerging from a haze of sleep, I realized that I would be leaving Istanbul in a few hours and made a spontaneous decision. Dressing quickly, I headed to Hagia Sophia once again, this time for fajr (the morning prayer). I reached it just as a small congregation was getting ready, and we prayed together. When I came out, the sky had already begun turning light, so I decided to explore the Fatih district. As it was Monday, the streets were busy even at that hour; I had to navigate my way through early morning commuters and breakfast places opening their doors for the day.

Without picking a route, I followed the road going downhill from Hagia Sophia square and ventured into whatever street seemed interesting. I made mental notes of eateries and shops that looked appealing, so I could stop by on my next visit. Now and then, lying next to a fancy clothing store or behind a candy shop, an old edifice would peek through, and I would be reminded of how Istanbul was where the cosmopolitan collided with the ancient. It put me in mind of Rome, where every corner and random street reveals an old building or a historical monument; a living museum in itself.

Going down one street just off Ankara Street, I came across the Marmara Pastaneleri, a bakery with an inviting interior just opening for business. I ventured in, took one look at the goodies on display and made up my mind. I ordered a small cheese and spinach börek and a dark chocolate cookie with coffee, all brought to my table with a friendly smile. I still remember the taste of that cookie in all its cocoa goodness. If you are in Fatih, this place is worth a visit. Before I left, I noticed what looked like an enormous hand pie nestled among the savory pastries. I was told it was a chicken borek; how was I supposed to resist that! It would make a good snack for later that day.

Happy with my purchases, I practically skipped back to my hotel, where I checked out a few hours later. Next on my itinerary was Bursa, and I decided to go there by ferry.