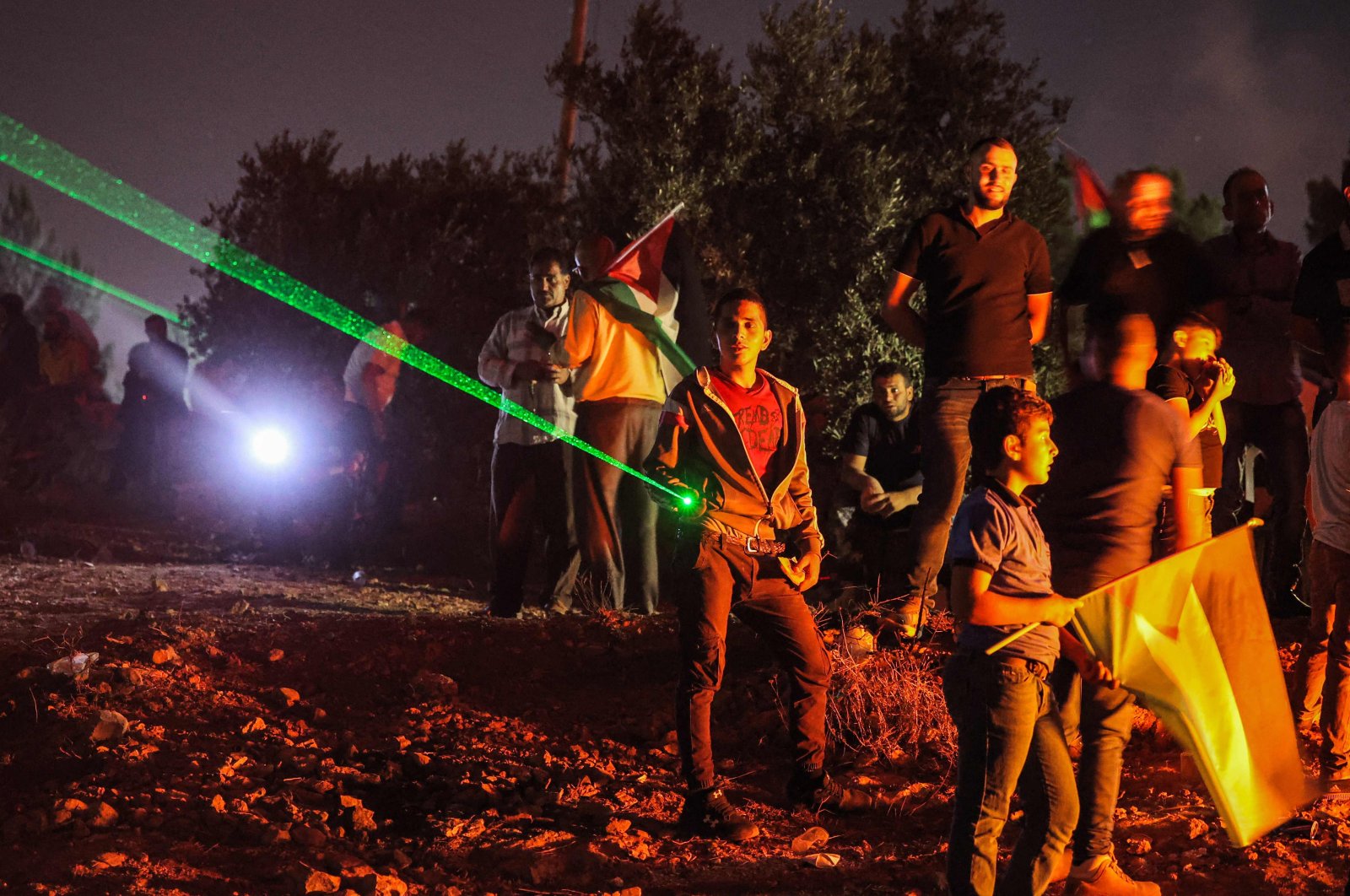 Palestinian protesters use high-powered lasers during a demonstration against the Israeli illegal settlers' outpost of Eviatar, in the town of Beita, near the occupied West Bank city of Nablus, occupied Palestine, July 1, 2021. (AFP Photo)
by Najla M. Shahwan Jul 08, 2021 12:05 am
RECOMMENDED

Every night, young Palestinian protesters with flashing lasers and honking horns head to Jabal Sbeih (Mount Sbeih) and the surrounding area in the town of Beita in the northern West Bank near Nablus where Israeli settlers built the "Eviatar" outpost in early May.

When the evening light filters through the olive trees, trucks arrive piled with tires, and young Palestinian men drag them onto roaring pyres.

The sky turns dark, the air becomes unbreathable and the wind blows toward the outpost.

Later, protesters start small fires and wave burning torches, lighting the hillside opposite the settlement with a terrifying wall of flames.

Some direct intense green laser beams are also aimed toward the settlement, others set off fireworks, the explosions echoing above.

The site lies 30 kilometers (19 miles) inside the occupied West Bank in a fertile olive and grape-growing territory for Palestinians around Nablus where nearby many Israeli settlements’ residents plan to extend their territory.

Back in March 2018, Palestinians were organizing “night confusion” activities during the “return marches” in Gaza Strip. That spirit is now inspired by today’s locals in Beita, a town of around 17,000 Palestinians. The locals aim to disturb the illegal settlers and force them to evacuate the outpost.

Palestinians say they will never allow them to stay on their own land.

The “night confusion” became a popular night protest activity when young Palestinians came up with a new, nonviolent resistance method. The latest tool of the activity was to direct powerful light, laser beams and flares at the outpost to disturb settlers and confuse the Israeli army.

These activities are an initiative on the part of the town’s young people away from the interference or support of any party and the events are funded by the young people themselves.

On the other hand, the night confusion activities are a continuation of the daily confrontations between young Palestinians and Israeli forces during their daily storming of the town.

Besides, the activities have attracted thousands from the area who do not take part regularly. A group of women, who have volunteered to prepare meals, drinks and water for the participants, and the press crews covering the confrontations, also take part in it.

The Beita residents say they will continue their efforts until the settlement outpost is removed from the top of Mount Sbeih. They say they’ll do it even if they have to resort to other means of struggle and confrontation.

Since the popular resistance began in May, six Palestinians protesting the Beita outpost have been killed by the Israeli forces, including two teenagers and two men in their late 20s, while hundreds have been wounded.

Israel’s policy of building settlements in the occupied territory remains one of the core issues in the conflict.

Illegal settlements are built on confiscated or stolen Palestinian land in the occupied West Bank and East Jerusalem – where some 650,000 Israelis now live.

However, for decades, successive Israeli governments have provided economic and political support for the settler movement, including prevarication and turning a blind eye to illegal outposts.

On his part, Israeli Defense Minister Benny Gantz ordered the outpost to be removed as it was set up without Israeli government authorization – which makes it illegal under Israeli law. But the decision was frozen by then Israeli Prime Minister Benjamin Netanyahu, who was ousted recently by right-wing nationalist Naftali Bennett (Bennett was once a senior leader of the settler movement).

Bennett is now the prime minister and heads a far-right religious party while he sits precariously atop a new coalition that spans the political spectrum from far-right to far-left, making sensitive policy decisions on the Israeli-Palestinian conflict difficult. The outpost could pose a major political problem.

Last month, the U.N. accused Israel of flagrantly violating international law by expanding settlements in the West Bank and East Jerusalem. The U.N said the settlements are illegal and urged the country’s new government to halt their expansion immediately.

The resolution demanded a halt to their expansion in the West Bank and East Jerusalem.

In a briefing to the UNSC on Guterres’ 12-page report, Wennesland stated that he was “deeply troubled” by Israel’s approval of a plan to add 540 housing units to the Har Homa settlement in East Jerusalem as well as the establishment of settlement outposts.

“They are a major obstacle to the achievement of a two-state solution and a just, lasting and comprehensive peace,” the U.N. envoy added.

Both Guterres and Wennesland also called on Israeli authorities to end the demolition of Palestinian homes and other property and the displacement of Palestinians – another flashpoint – “and to approve plans that would enable these communities to build legally and address their development needs.”

The U.S. government officially opposes Israel’s continued settlement policy and recognizes the illegality of all Israeli settlements in the occupied Palestinian territory.

However, the U.S. has taken no steps to pressure Israel to stop building and expanding settlements.

On its part, U.S. President Joe Biden’s administration says it will urge both Israel and Palestinians to refrain from unilateral steps, including settlement construction; however, it is not clear how much pressure the U.S. intends to bring to bear over the settlement constructions in East Jerusalem and the West Bank.

The settlement plan’s advancement is a block to any future peace agreement. Whether the change in power in the U.S. would force Israel to restrain settlement construction still remains a big question.