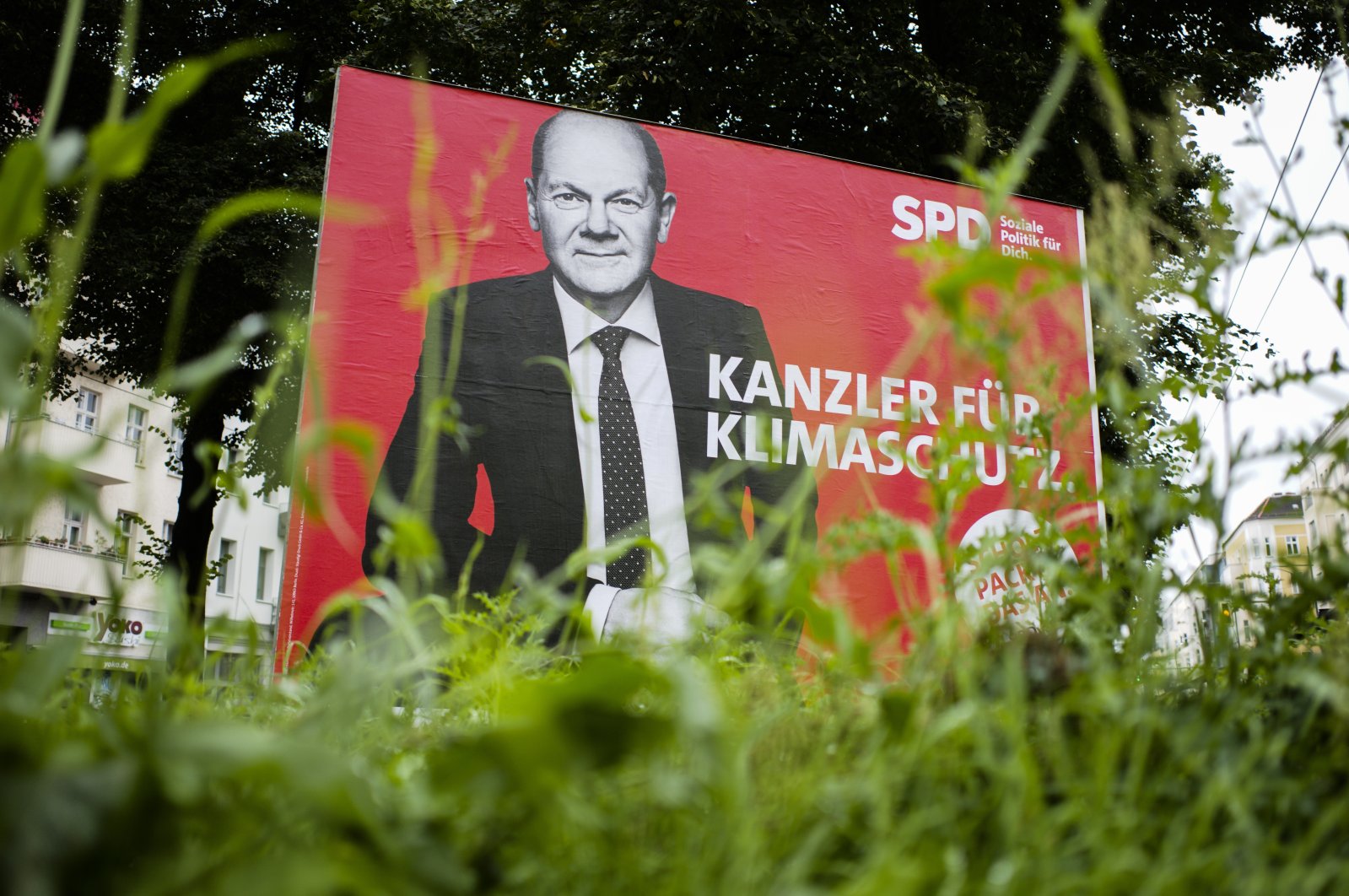 The SPD candidate for chancellor Olaf Scholz is displayed on an election campaign poster reading: “Chancellor for climate protection”, near a street in Berlin, Germany, Aug. 30, 2021. (AP Photo)
by Klaus Jurgens Aug 31, 2021 12:05 am
RECOMMENDED

Not so long ago, pundits would have argued that, as long as Germany's Social Democratic Party (SPD) got at least 10% in the polls, it would do well at the ballot box. All of a sudden, pollsters predict deputy leader Olaf Scholz and company could actually come out ahead of German Chancellor Angela Merkel’s Christian Democratic Union (CDU). What has led to this dramatic U-turn among the German electorate?

Frankfurter Rundschau broke the news a few days ago by referring to German polling company Forsa and their findings, claiming that the SPD could have a lead over their rivals, the CDU and Christian Social Union (CSU) coalition, for the first time in fifteen years. According to Forsa, the SPD would score 23%, whilst Merkel’s CDU/CSU would score 22%, respectively.

Before analyzing whether Scholz can deliver, we must take a look at the state of affairs in the majority holding coalition party, which is made up of the combination of CDU and its Bavarian sister party, CSU. Recently serious infighting broke out, and the Minister-President of Bavaria Markus Soder verbally attacked the Minister-President of North Rhine-Westphalia (NRW) Armin Laschet.

It is totally normal for a political party to debate who should be the front-runner in case of another win at the ballot box, and doubly so when Angela Merkel is leaving her position of chancellor. Yet commentators have had a field day, tirelessly commenting on how the highly cherished Merkel is about to at last leave the German political arena. Similar to a phoenix rising from the ashes, the grand coalition partner SPD has refound, or shall we say rekindled, its appetite for not just power-sharing but actually being the number one political power, even if in a renewed grand coalition. What’s more: A headline-making event saw Laschet caught on camera supposedly enjoying a joke while visiting a flood-stricken town; written with all due respect, is this human capital for becoming Chancellor? These issues are nevertheless still only the tip of the iceberg, and we have not even mentioned the dramatic developments in Afghanistan.

However, they say that just one gaffe would not make a political summer; hence we must dig deeper. Germany, like all other European countries, was hit hard by the COVID-19 pandemic. Although the economy fared reasonably well, ordinary citizens often found it difficult to make ends meet. When issues such as social exclusion gain importance – let us talk about whether fully vaccinated citizens should have more rights than unvaccinated people – political movements defending human rights and social topics will soon have the upper political hand. Not all such movements will succeed, however – as is the case in neighboring Austria where the far right Freedom Party (FPÖ) camouflages anti-immigrant rhetoric with anti-vaccination propaganda, yet is not expected to fare extremely well at the ballot box. The German electorate will, in all likelihood, refrain from experiments. A major opposition party, such as the SPD, which was previously perceived as a party of social inclusion, will have it much easier when compared to far left or far right fringe parties.

With issues such as social inclusion back in the political Top 10, and worries about how to guarantee pensioners receive a fair pension in the post-coronavirus economy, Scholz is set to make inroads into various rival political parties.

Merkel fatigue? Less so. Conservative ideology fatigue in a soon-to-be post-coronavirus reality? Much more likely. Is the SPD about to be reborn, or is it just an illusion?

All can change within the upcoming weeks, as one day in politics is a long day. Scholz must position himself not just as a beneficiary of the windfall profits of the issues introduced in the previous paragraphs. His SPD must propose a road map for how to govern the country if the electorate were to choose them. It seems that out of the list of "hot picks," Scholz has lifted the topic of state pensions into the prime spot.

But being at the helm of a coalition and hoping for a constant wave of approval from a single issue would be absolutely shortsighted.

Long before even the first votes are counted, Scholz must take into account that, no matter how well his party fares on Sept. 26, the chance for an overall majority is zero. Hence, it is coalition-making time again.

Right now, it seems that Scholz has four possible scenarios if he can manage to hold on to his present lead. He can invite CDU/CSU and the liberal Free Democratic Party (FDP) to come together, joining forces as a kind of national unity government in times of unexpected (pandemic) troubles. He could go for an SPD/Greens/FDP coalition or ask the left party/Greens to be united under him. One option remains for Merkel’s CDU/CSU: namely, working with the Greens/FDP. These scenarios are solely based on the Forsa poll, which has formed part and parcel of this brief opinion page contribution.

Can the SPD deliver? Will the infighting, for which the SPD is almost as famous as the Greens are, be at least temporarily halted? Can more traditional social democrats who favor strong working relationships with the trade unions form an "internal coalition of sorts" with another, more market economy-oriented inner-party faction? And above all else, how "far left" can the SPD go to catch votes in left party territory without alienating its core middle-class voter potential? And how can all this be achieved and sorted out in less than four weeks? Much food for thought for the party's strategists, that is for sure.

Hence, is the news of a reborn SPD "fake news" or good news? The Election Day will not let us know; the four years thereafter would.

Merkel never said she was quitting politics for good; she said she was no longer available as chancellor. Thus, speculation is rife on whether she would be interested in a move to the United Nations or the European Union. A female NATO secretary-general in a post-pandemic world is certainly no longer an impossibility. Everything has changed, and much that was previously perceived as immovable political issues may change and shift as well.

Her reputation is outstanding. It is nothing out of the ordinary that toward the end of such a long reign, a few cracks would appear. After a year or so in a more relaxing mode and mood, Merkel would be ready for another position at the helm, albeit another type of helm.

It would probably be more appropriate to write, "who would dare to play the Turkey card?" One issue that did not feature prominently at all so far during the campaign is relations between the Republic of Turkey and Germany. Once the election campaign dust has settled, and it is back to business for whoever steers the German political supertanker, how will these relations play out?

The left party mostly disregards and disrespects modern Turkey and often sides with at least the Peoples' Democratic Party (HDP), if not outright with PKK/YPG terrorist group supporters. The Greens have in the past often challenged Turkish democracy and are equally not trustworthy partners for Ankara.

The far right Alternative for Germany (AfD) is not necessarily an expert hub with regards to international relations, and the liberal FDP focuses on market economy matters, as they are supposed to. Thus it boils down to the SPD and the CDU/CSU to come up with workable propositions.

Many were hoping that as a farewell gift to Turkish-German relation-building, Merkel would push for a modernization of the customs union, manage to organize visa-free travel for Turks by simply telling her EU allies "let us do it" and offer Ankara a clear perspective as to when to join the block. Result? No comment.

Hence all eyes are on Scholz. He might have the courage and the stature as a future statesman to not only step into the shoes of former Chancellor Gerhard Schroder but actually outpace him once wearing them.

Germany needs Turkey, and Turkey needs Germany. In a post-pandemic world, in a post-Brexit world, it is those two friendly nations that could bilaterally cooperate ever more closely and help to transform today’s stalemate EU into a power-sharing powerhouse. They could be socially inclusive, tolerant, multicultural, multifaith, economically sound, successful and globally respected.

A hot four weeks lie ahead in the German Bundestag. May the best-suited candidate ultimately get elected as the country’s new chancellor.