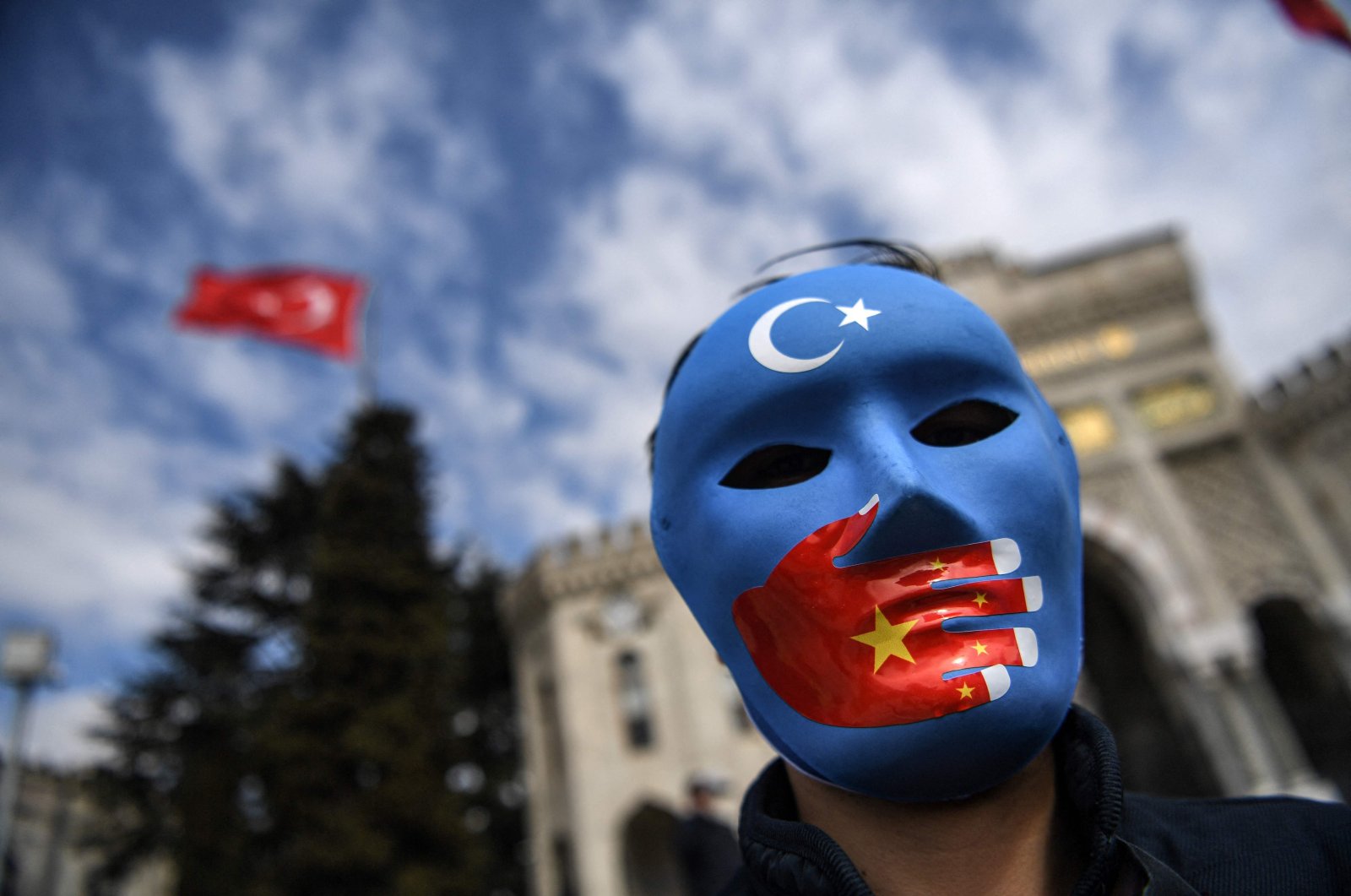 A demonstrator wearing a mask painted with the colors of the flag of East Turkestan takes part in a protest by supporters of the Uyghur minority, at Beyazıt square, Istanbul, Turkey, April 1, 2021. (AFP Photo)
by Muhammet Ali Güler Apr 10, 2021 12:05 am
RECOMMENDED

In order to understand Turkey's ties with Washington and Beijing, it must be understood that the country prioritizes the well-being of the Uyghurs and seeks to provide a voice for the Muslim world in global politics.

While Ankara does not advocate choosing one side over another, other global issues may force Ankara to change its stance in the future.

Regional and global issues, as usual, were at center stage during the roundtables. The common ground for Riyadh, Ankara, Tehran and Beijing is the palpable deterioration of bilateral ties with the West over several issues.

In this regard, U.S.-Middle East relations have been largely affected by global and regional issues. For instance, the Khashoggi murder has severed ties between Washington and Riyadh.

Other pressing issues include Ankara's push for the U.S. to clarify its stance over the PKK terrorist organization and its Syrian offshoot, the YPG, the nonproliferation of nuclear power and sanctions between Iran and the U.S. as well as the Chinese-U.S. trade war and clashing concepts of world order.

These issues have somehow changed the political, economic and military landscape, regionally and globally.

The first thing that comes to mind is how NATO member Turkey and NATO's ideological rival China have improved their relationship in light of the West's harsh stance toward Ankara and Beijing.

Similar to the West's punitive stance over Turkey's purchase of S-400 missiles from Russia, Ankara may face harsh backlash from Western nations if it extends its partnership with China.

Thus, the subtle point here is that the West should change its perception of Turkey rather than attempt to change the country.

Perhaps the most significant hindrance of the steady relationship between Turkey and China is the issue of the Uyghurs.

There is a huge concern among the Turkish people about the well-being of Uyghurs in China. On March 25, after a recent meeting between President Recep Tayyip Erdoğan, Foreign Minister Mevlüt Çavuşoğlu and Wang, Çavuşoğlu tweeted that "we expressed our sensitivity and thoughts about Uyghur Turks."

-Will enhance our cooperation on fight against pandemic and vaccine.

-Conveyed our sensitivity and thoughts on Uyghur Turks. pic.twitter.com/fVdLLtgAey

Later, the Chinese Embassy's Twitter account targeted two prominent opposition politicians in Turkish politics, who criticized China over the treatment of Uyghurs. Ankara summoned China's envoy and conveyed its discomfort over the incident.

The events reflect that Ankara always shares its opinions on this issue directly.

Besides, the world has been observing the Uyghur situation in China. Many Western countries have clearly urged China to stop its bad treatment of Uyghurs.

Western powers have publicly called for other countries to take a similar stance against China over the Uyghur issue. During his visit to Japan on March 7, U.S. Secretary of State Antony Blinken described China's actions as aggressive and repressive.

Blinken also underlined the importance of ties with Japan, South Korea and their allies. The U.S. has repeatedly emphasized that it does not welcome China's political, economic and cultural intentions and approaches.

In one instance, the Confucian institutions are considered espionage organizations.

The latest war of words between U.S. and Chinese officials in Alaska revealed a stark and profound clash of ideas on the world order.

Chinese officials rightfully criticized the so-called "rules-based world order," which favors certain countries. They articulated that China is an advocate of the U.N.-centered international system where Beijing and Ankara have intersecting interests.

The recent developments in Turkey's neighboring regions have shown that new political, economic and social moves will be made to subvert internal and regional peace and stability, pushing Ankara into a quagmire in Syria and Iraq.

For instance, Iraq's Kurdish Regional Government (KRG) has shown its hidden and sneaky agenda by claiming territorial ownership of almost half of Turkey against Turkey.

There is evidence that U.S. diplomats took part in Nevruz celebrations with the KRG. Furthermore, there are many reports of the legal or illegal presence of the PKK in many countries.

Additionally, it seems that Turkey is a strong advocate of China treating Uyghurs better. It is odd to see the frequency of news circulating about the YPG/PKK on western media, including in China.

These media reports portray the YPG/PKK as the saviors of the region and the first line of defense again Daesh terrorists.

Here, it should be mentioned that Turkish forces have lost over 30 military officers in the fight against Daesh. Turkey has been reiterating its call for an international consensus to eliminate all terrorist organizations in Syria and Iraq.

However, this call has been regularly ignored or declined by the rules-based international community.

Ankara should directly and frankly ask China about its stance on these terrorist groups that are direct threats to the Turkish presence in the region, who are there to bring peace.

Several scholars have repeated that Turkish-China relations will not take the desired shape unless both countries positively change their perceptions of the other.

Ankara's call for the betterment of Uyghurs' living conditions is the right policy. Turkey agrees with China that a revolution is needed in the current rules-based world order in order to evolve into a more comprehensive system. The countries' rational moves reveal that they both are against hegemonic powers and policies.