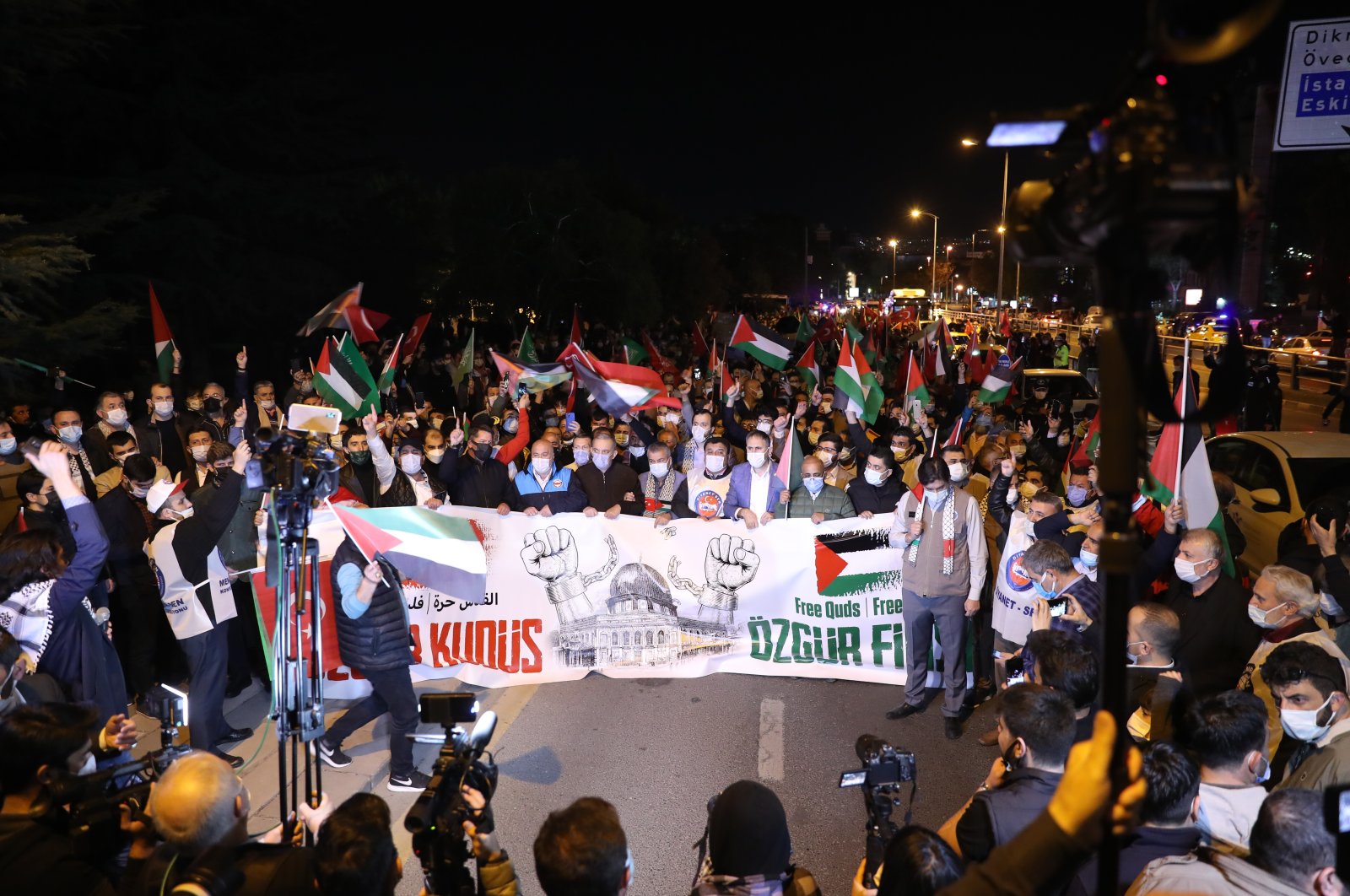 People march in protest against Israeli violence, holding a banner saying "Free Jerusalem, Free Palestine," in the capital Ankara, Turkey, May 10, 2021. (Sabah Photo)
by DAILY SABAH WITH AA May 11, 2021 11:19 am
RECOMMENDED

Large crowds in Turkey late Monday marched in protest against the recent Israeli attacks on Palestinians in occupied East Jerusalem and the threat of Palestinian evictions from the Sheikh Jarrah neighborhood of the city.

Thousands of people gathered outside the Israeli Embassy in Ankara and its consulate in Istanbul to protest the Israeli oppression against Palestinians on Monday, while President Tayyip Erdoğan spoke to regional leaders about the rising violence.

The Istanbul branch of the Anatolian Youth Association group organized the protest outside Israel's Consulate General, where the group chanted slogans against Israel and waved Palestinian and Turkish flags.

Speaking during the protest, branch head Yunus Genç stressed that the Al-Aqsa Mosque – the East Jerusalem site of many of the attacks in recent days by Israeli security forces against Palestinians – was a "red line for Muslims."

He underlined that Muslims must defend the holy site, urging support for Jerusalem residents in this regard.

"We think Israel should start thinking of what kind of a revolution it will undergo and be overthrown very soon ... It's time to speak in the language the oppressors understand. The Grand National Assembly (Parliament) of Turkey and the Organisation of Islamic Cooperation should convene," he said.

Noting that Jerusalem was a shared issue for all Muslims, he added that Israel did not refrain from "treacherous and terrorist" attacks on Al-Aqsa Mosque.

"Today, our first qibla, the Al-Aqsa Mosque, as well as the city of prophets Jerusalem and the fertile lands of Palestine are under occupation," Genç said, adding that the occupation forces would be "repelled as swiftly" as they came to those lands.

In almost all of Turkey's cities, people held protest marches against Israel's cruel and violent treatment of Palestinians. Protesters demonstrated their support and solidarity with Palestine.

"Imagine the most sacred temple is attacked on the most sacred day of that religion. Imagine pilgrims to the Vatican are attacked by fanatics who are aided by armed forces. Imagine Christmas or Hanukkah services in New York interrupted by violence."

Pointing to what Palestinians are going through, he said: "Imagine a peace process that only results in the deepening of occupation. Imagine people under occupation in Paris who cannot even hold elections. Imagine people in London denied their civil rights and freedom of movement."

In earlier tweets, he also invited the international community to take responsibility and take a stand against Israel's state terrorism in order to stop the massacres committed by Israel.

In a series of tweets, Altun said President Recep Tayyip Erdoğan has always stood by his Palestinian brothers and sisters in the just cause of Palestine.

"Our president, who has been carrying out a decisive struggle for the independent Palestinian state with East Jerusalem as its capital, continues to defend the independent Palestine and our Palestinian brothers against Israel, which is increasing its terrorist acts and occupation attempts. Our president, who held talks with Palestinian President Mahmoud Abbas, Hamas chief Ismail Haniyeh, Indonesian President Joko Widodo, King Abdullah II of Jordan and Emir of Kuwait Sheikh Nawaf, continues his diplomatic traffic without interruption," Altun added.

He emphasized that they will not allow a step-by-step occupation of Palestine.

According to the Palestinian Red Crescent, at least 305 people were injured when Israeli police stormed Al-Aqsa Mosque on Monday and attacked Palestinians who were on guard to prevent possible raids by extremist Israelis. Tensions have been running high in the Sheikh Jarrah neighborhood of East Jerusalem since last week when Israeli settlers swarmed in after an Israeli court ordered the eviction of Palestinian families.

Palestinians protesting in solidarity with the residents of Sheikh Jarrah have been targeted by Israeli forces. Israel occupied East Jerusalem during the 1967 Arab-Israeli war and annexed the entire city in 1980 – a move that has never been recognized by the international community.