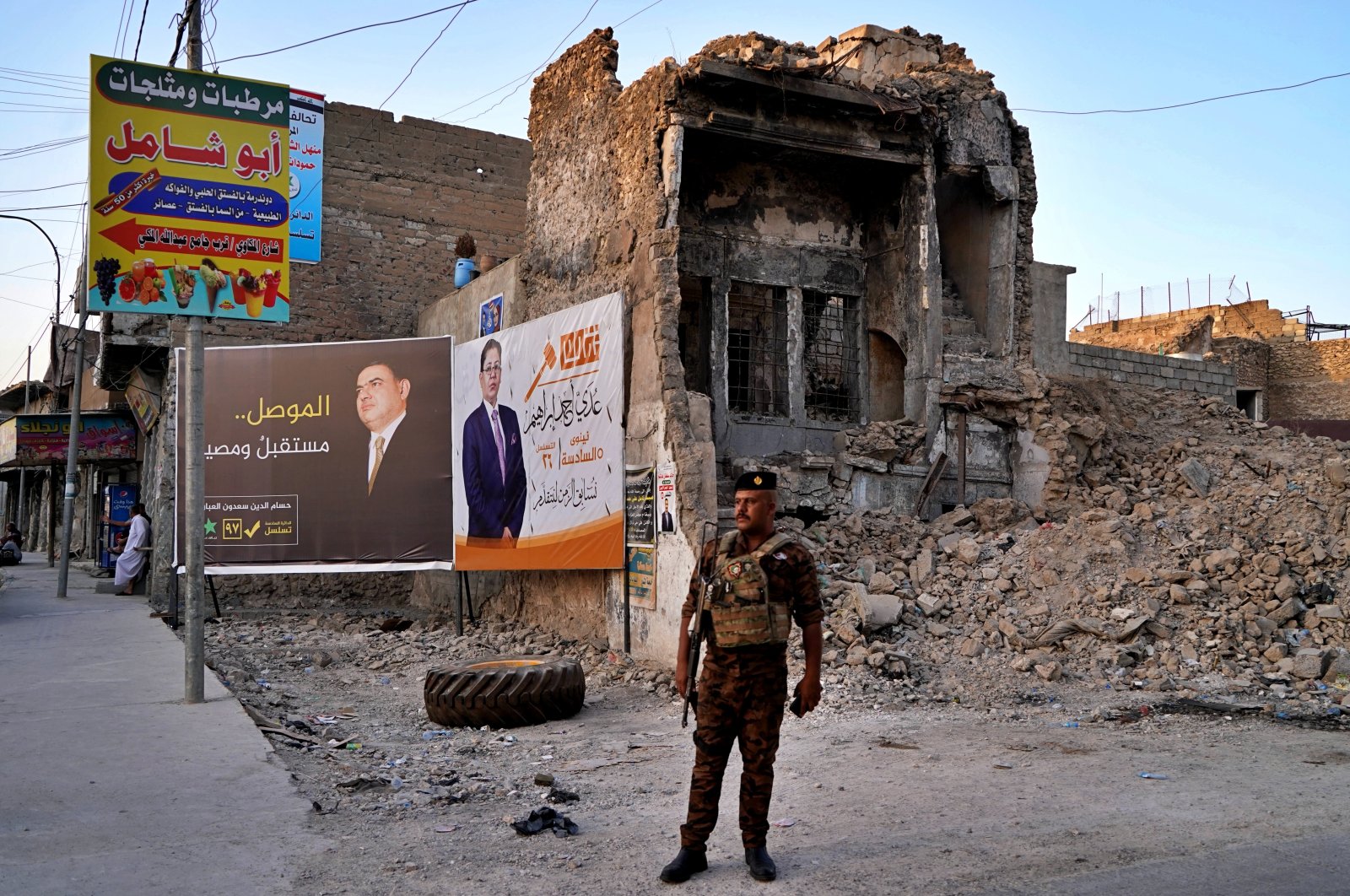 An Iraqi federal policeman stands guard near campaign posters for parliamentary elections are displayed near destroyed buildings from fighting between Iraqi forces and the Daesh terror group in Mosul, Iraq, Oct. 3, 2021. (AP Photo)
by DAILY SABAH WITH AA Oct 25, 2021 10:33 am
RECOMMENDED

Ali Rıza Güney visited the Iraqi city of Mosul and the town of Tal Afar, where Turkmen live.

In his press statement with al-Jabouri, the ambassador said that Turkey has deep-rooted human, historical and economic relations with Mosul, as with the whole of Iraq.

"As the Republic of Turkey, we aim for Mosul to achieve more prosperity, stability and peace in absolute terms. Our desire is valid for all of Iraq, but Mosul is a somewhat exceptional example here because it was seriously damaged during the Daesh period," he said.

Recently, Turkey's foreign minister said that Ankara will "never accept the presence" of the PKK terrorist group in Iraq. Mevlüt Çavuşoğlu said terrorism will never have a place in the future of the region and Iraq.

Many PKK terrorist hideouts and bases are located in northern Iraq, from where they carry out attacks on Turkey. The Turkish military regularly conducts cross-border operations in northern Iraq. Turkey has long stressed that it will not tolerate terrorist threats posed against its national security and has called on Iraqi officials to take the necessary steps to eliminate the terrorist group. Ankara previously noted that if the expected steps were not taken, it would not hesitate from targeting terrorist threats.

Expressing that Mosul needs investors and that Turkey has people willing to invest there, Güney also stated that Turkey and Iraq are also working in close contact on the water issue.

Daesh took over the Turkish Consulate in Mosul on June 11, 2014, and held 49 consulate personnel and their families captive. The hostages were safely returned to Turkey after 101 days of captivity.

Significant parts of Mosul were devastated during the Iraqi army and paramilitary groups' offensive to recapture the city from Daesh in 2017.

Turkey in 2018 announced that it will provide the necessary support for the reconstruction of Iraq, pledging a $5 billion loan and $50 million in grants-in-aid, making it the top contributor to the country.

Expressing their satisfaction with the visit to Mosul of Turkey's ambassador to Baghdad, al-Jabouri said: "Our relations and ties with neighboring Turkey are very strong. Turkish companies have helped us a lot in the reconstruction of Mosul. Turkish companies are still working on hospitals, sewage and roads throughout Mosul. They continue their work on bridge construction."

He expressed that they are in favor of maintaining strong relations with Turkey in the future.

Ambassador Güney also visited the town of Tal Afar as part of his contacts in Mosul with the delegation accompanying him.

Güney, who opened a football field of international standards built by TIKA in Tal Afar, also met with Turkmen officials and the public in the district.