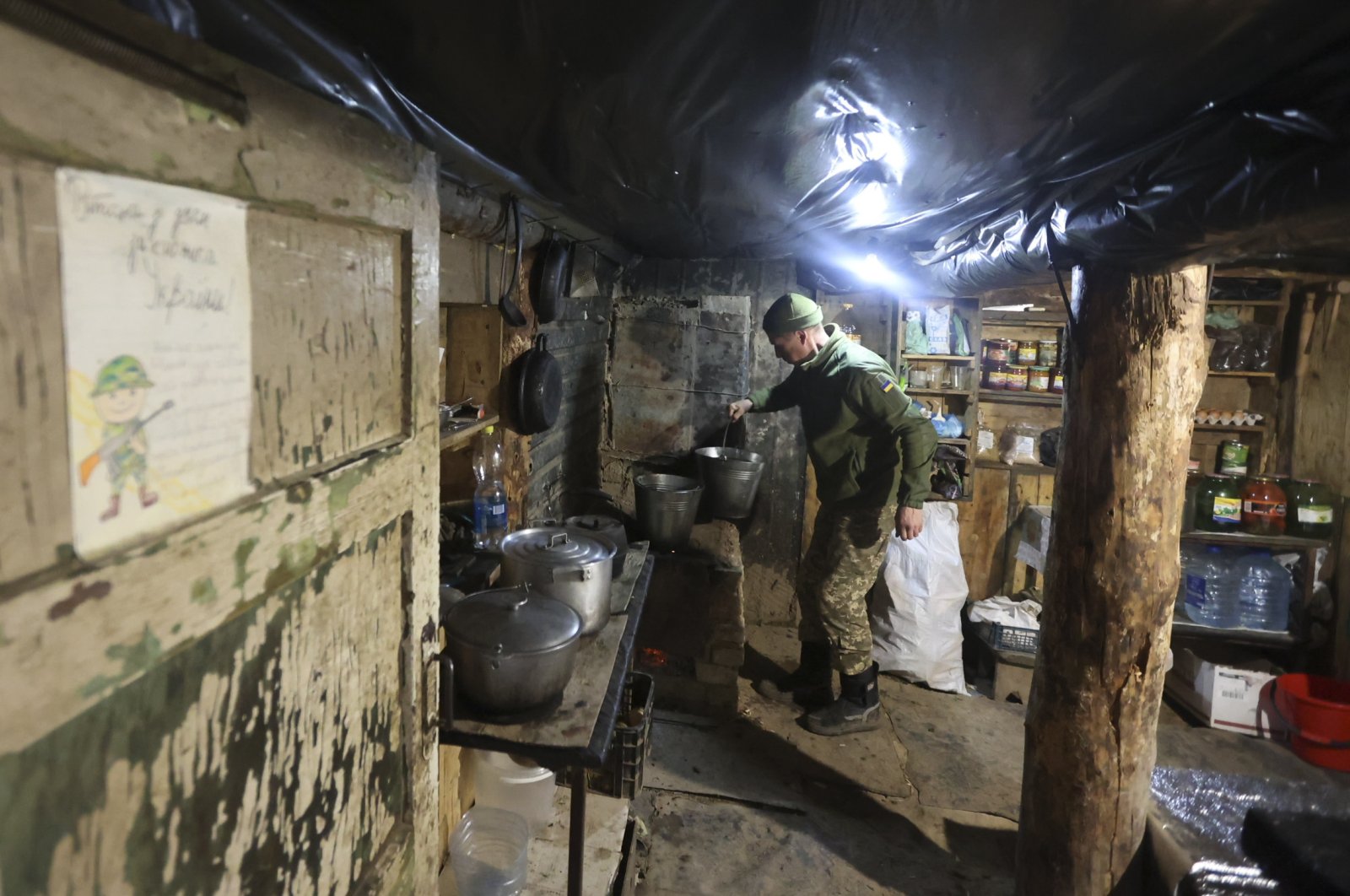 A Ukrainian soldier cooks in a shelter near a fighting position on the line of separation from pro-Russian rebels near Debaltsevo, Donetsk region, Ukraine, Dec. 3, 2021. (AP Photo)
by DAILY SABAH WITH AA Dec 05, 2021 11:08 am
RECOMMENDED

Turkey on Saturday reaffirmed its willingness to mediate the de-escalation of tensions between Moscow and Kyiv amid concerns over Russia's military buildup near the border with Ukraine.

"We are ready to play our role to de-escalate tension between the two countries, with whom we maintain good relations," Turkish Presidential Spokesperson Ibrahim Kalın told Anadolu Agency (AA).

Reiterating that Turkish President Recep Tayyip Erdoğan made the offer to his Russian counterpart Vladimir Putin, he underlined that any further escalation would harm all parties involved.

Turkey could mediate between Ukraine and Russia amid increasing tensions in the region, Erdoğan said last week.

“It is our desire that the attitude in this matter develops in a positive direction. There could be a mediation about this; we will discuss this issue with them, we would like to have a share in the solution of this by developing these talks both with Ukraine and with Mr. Putin,” he added on his return from Turkmenistan.

The two leaders talked about enhancing bilateral ties, a statement by the Presidential Communications Directorate said.

They also touched upon recent regional developments in Azerbaijan and Armenia, Syria, Libya and Ukraine.

Turkey has been in contact with both Russia and Ukraine, Foreign Minister Mevlüt Çavuşoğlu also said Wednesday, noting that Ankara advised both sides to remain calm and de-escalate the situation.

If Turkey and President Erdoğan can use their influence to encourage Ukraine to implement the 2014 Minsk Protocol, Russia would welcome it, the Kremlin said Wednesday.

The Minsk agreements were signed to stop the ongoing conflict between the pro-Russian separatists and the Kyiv administration.

The agreements included a cease-fire in the region and a prisoner exchange while allowing the Kyiv administration to make a constitutional amendment that would give Donbass special status.

The pro-Russian separatists were supposed to withdraw their weapons from the Ukrainian-Russian border.

However, the agreements' implementation has been hampered as the two sides accuse each other of violating the cease-fire.

"We will welcome any efforts that can help us to put an end to this war, to return Ukraine's territories that are currently under Russian control," Ukrainian Foreign Minister Dmytro Kuleba told a news briefing.

Referring to the latest developments in Libya ahead of elections scheduled for Dec. 24, Kalın said Turkey supports the polls going ahead as planned.

However, he maintained that efforts to bring rivals together and encourage political dialogue should continue, regardless.

He said Turkey would remain a staunch supporter of the Libyan people and the legitimate government, irrespective of the election results.

In response to a question on the Cyprus issue, Kalın said many agree that isolation, sanctions and the embargo Turkish Cypriots have had to endure are neither just nor legitimate.

Turkish Cypriots tried for decades to find a solution and showed a constructive approach as proven during the Annan Plan in 2004 and Crans-Montana talks in 2015-2017, he said, adding that a renewed endeavor for the resolution must accept the sovereignty of the Turkish Cypriot side and recognize their equal political rights.

On the rapprochement with certain countries in the region, Kalın emphasized that Turkey is ready to negotiate with any party based on equality, mutual respect and interests.

The island of Cyprus has been mired in a decadeslong dispute between Greek Cypriots and Turkish Cypriots, despite a series of diplomatic efforts by the United Nations to achieve a comprehensive settlement.

In 1974, a Greek Cypriot administration-led coup aimed at Greece’s annexation led to Turkey’s military intervention as a guarantor power to protect Turkish Cypriots from persecution and violence. As a result, the Turkish Republic of Northern Cyprus was founded in 1983.

Kalın also said Friday that the International community has “failed in the refugee crisis.”

Kalın told the 7th edition of the Rome Mediterranean Dialogue (MED) in Rome that Turkey has hosted 4 million Syrians and noted he talked to his European counterparts to update the 2016 migration deal between Turkey and the European Union.

He said €6 billion ($6.7 billion) that was allocated by the EU is nothing if one considers the enormous size of the issue.

"It's practically nothing for millions of refugees for their needs, educational needs, medical needs and everything else," he said.

Let us put aside the debates within the EU, he said, noting that Turkey hopes the migration agreement will be updated.

Meanwhile, stating that the United Nations-supervised Geneva process on Syria has been rendered dysfunctional by the Assad regime, Kalın underlined that Turkey was trying to engage Russia and Iran, which back the regime, to put pressure on the regime.

The deal was signed March 18, 2016, as the Syrian civil war continued to uproot millions who then began their "journey of hope" to reach the EU.The agreement contained six key points, including the reinvigoration of Ankara's EU ascension process, modernization of the Customs Union, revival of top-level dialogue, visa liberalization for Turkish nationals, cooperation in managing migration flows and counter-terrorism.