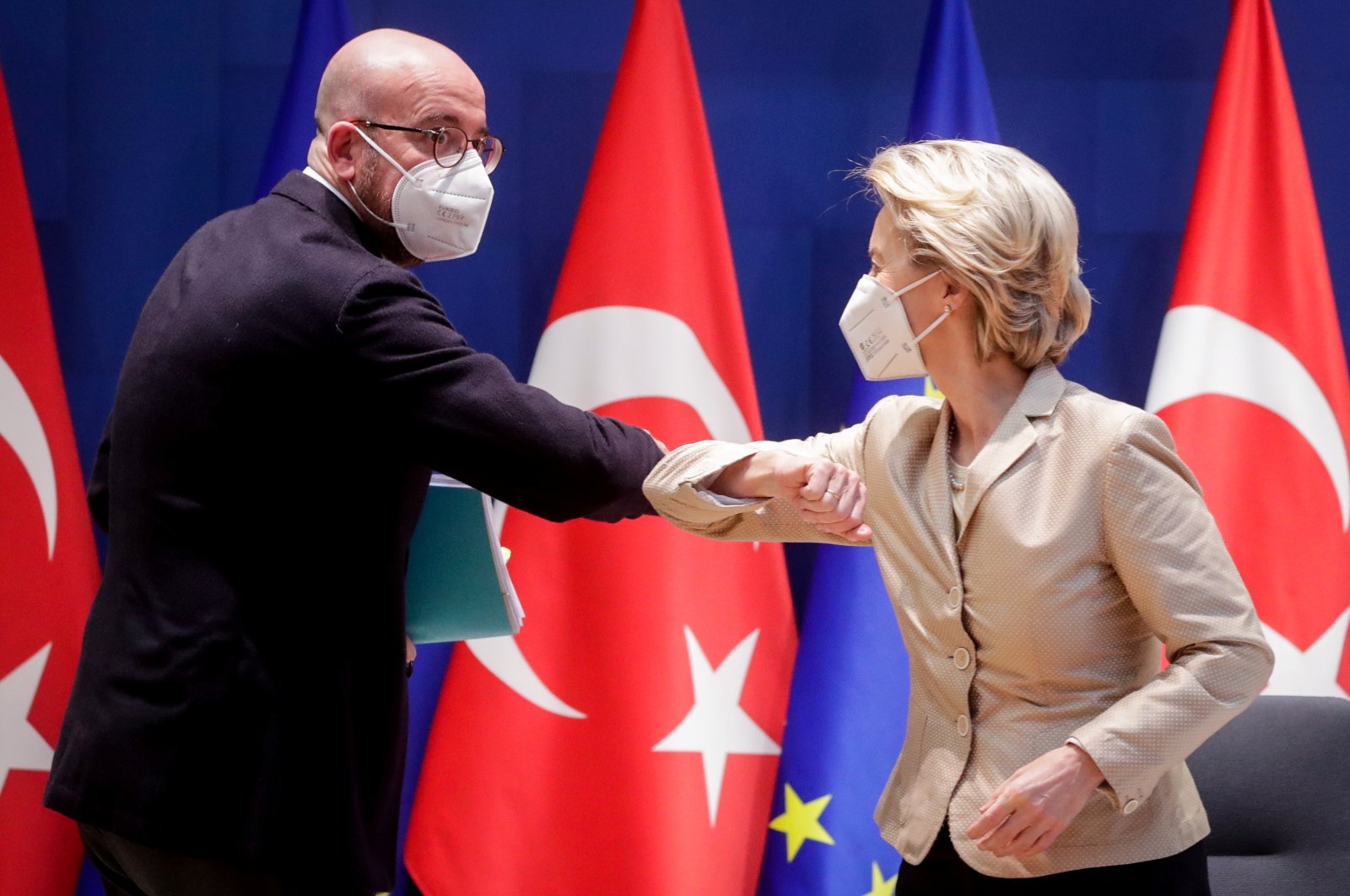 The European Commission welcomes Turkey’s recent constructive attitude on many bilateral issues, according to a report prepared by the High Representative of the Union for Foreign Affairs and Security Policy released on Monday, while the report noted that the Eastern Mediterranean, the island of Cyprus and other issues still pose a threat to ties with the country.

The European Union should "put a number of possible areas of cooperation on the table" in relations with Turkey "to allow for a progressive, proportionate and reversible approach," the bloc's foreign policy chief said in the new report to be presented to EU leaders this week.

The report by the bloc's foreign policy chief, Josep Borrell, was passed at Monday's Foreign Affairs Council meeting and will be presented to EU leaders at a key summit this Thursday and Friday where the EU-Turkey ties will be discussed.

The report said Turkey's stance on various issues has been calm and constructive since December 2020, and its positive steps were welcomed by the bloc. But it added that a de-escalation process on tensions between Turkey and Greece remains fragile, and time is needed to make a judgment about the sustainability of the process.

“Since last December, Turkey has shown a calmer, more constructive attitude on various issues, including in its bilateral relations with several EU member states. These are positive and welcome steps forward,” the joint communication titled “State of play of EU-Turkey political, economic and trade relations” said, adding that the COVID-19 pandemic has further enhanced cooperation between Turkey and the EU.

The EU needs to come up with a number of potential areas of cooperation to enable a progressive approach to further enhance the current momentum, the report said, as it highlighted that the bloc needs more time to judge whether Turkey’s positive approach is “sustainable and credible.”

The report continued by listing a number of suggestions, which included a more effective and mutually beneficial implementation of the 2016 Turkey-EU migrant deal, strengthening the already-substantial economic relations, including the modernization and expansion of the current Turkey-EU Customs Union trade deal signed in 1995.

Under the deal, Turkey was promised 6 billion euros ($6.77 billion) in financial aid to be used by Ankara to finance projects for Syrian migrants. Yet, Turkey did not undertake the difficult task of shouldering increasing migration from Syria only for the sake of financial assistance but has also demanded visa liberalization for Turkish citizens; likewise, the customs union was to be updated. Turkish authorities state that almost five years have passed since the signing of the deal and that it needs an update in accordance with current conditions.

“This would also provide a guiding framework for economic reforms in Turkey. The EU Member States should agree on the negotiating directives and authorize the Commission to open negotiations for this modernization, provided that Turkey takes concrete steps in resolving the current trade irritants,” the report said.

EU leaders at the December summit asked Borrell to report on how to advance relations with Turkey. Based on the report, the EU leaders will also address migration and the renewal of the EU-Turkey migrant deal. Last week, Borrell said it was necessary to strike a new deal because the 2016 agreement had "produced tangible results" and "led to a significant decrease of loss of human lives, a reduction in irregular crossing and improved the situation of refugees and migrants in Turkey."

EU foreign ministers welcomed the new report on the bloc's future relationship with Turkey, Borrell also said Monday after the presentation of the report.

Speaking at a press conference after a meeting of EU foreign ministers, the top EU diplomat said the report provided a good basis "for the debate of EU heads and governments," looking ahead to the EU summit this Thursday and Friday.

"The report recognizes that since last December, we have seen some signs and steps towards the de-escalation in the Eastern Mediterranean from the Turkish leadership," Borrell said, referring to a maritime dispute between Turkey and Greece.

However, he also noted some concerns over the recent domestic situation in Turkey, saying: "These kinds of actions take Turkey out of the European path."

Last week, Turkey's top prosecutor filed an indictment seeking to shut down the pro-PKK Peoples' Democratic Party (HDP), calling it an undemocratic party that colludes with the PKK terrorist organization and seeks to destroy the unity of the state. Turkey last week also withdrew from the Istanbul Convention, saying that domestic legislation provides ample protection to women from domestic violence.

Borrell admitted that there is a mix of positive and negative approaches that EU governments had to take into consideration.

But he also stressed that, "We want to have a relationship with Turkey as a candidate country, a neighbor, as an important country with whom we want to have the best relationship, defending the interests and values of member states."

The year 2020 proved particularly difficult for relations between Turkey, which remains an official candidate for EU membership, and the EU, as tensions increased over maritime zones and drilling rights in the Eastern Mediterranean.

EU leaders during a meeting in Brussels on Dec. 10 decided to draw up a list of Turkish targets to sanction over what they described as Ankara’s “unilateral actions and provocations” in the Eastern Mediterranean.

Ahead of the summit, Greece called for additional sanctions, an EU arms embargo on Turkey and the suspension of the Turkey-EU customs union, but during discussions, a majority of European leaders opposed severe economic sanctions, opting for a softer approach, creating space for a positive agenda.

Turkey has a very long history with the union and the longest negotiation process. The country signed an association agreement with the EU’s predecessor, the European Economic Community (EEC), in 1964, which is usually regarded as a first step to eventually become a candidate. Applying for official candidacy in 1987, Turkey had to wait until 1999 to be granted the status of a candidate country. For the start of the negotiations, however, Turkey had to wait for another six years, until 2005, a uniquely long process compared with other candidates.

On top of the slow negotiations, another challenge threatened Turkey’s ascension into the union when in 2016 the Gülenist Terror Group (FETÖ) attempted a coup, forcing the country to declare a state of emergency. Unhappy with the move, the European Parliament on Nov. 24, 2016, stated that it would temporarily “freeze” the negotiations, which has kept the process at a standstill ever since.