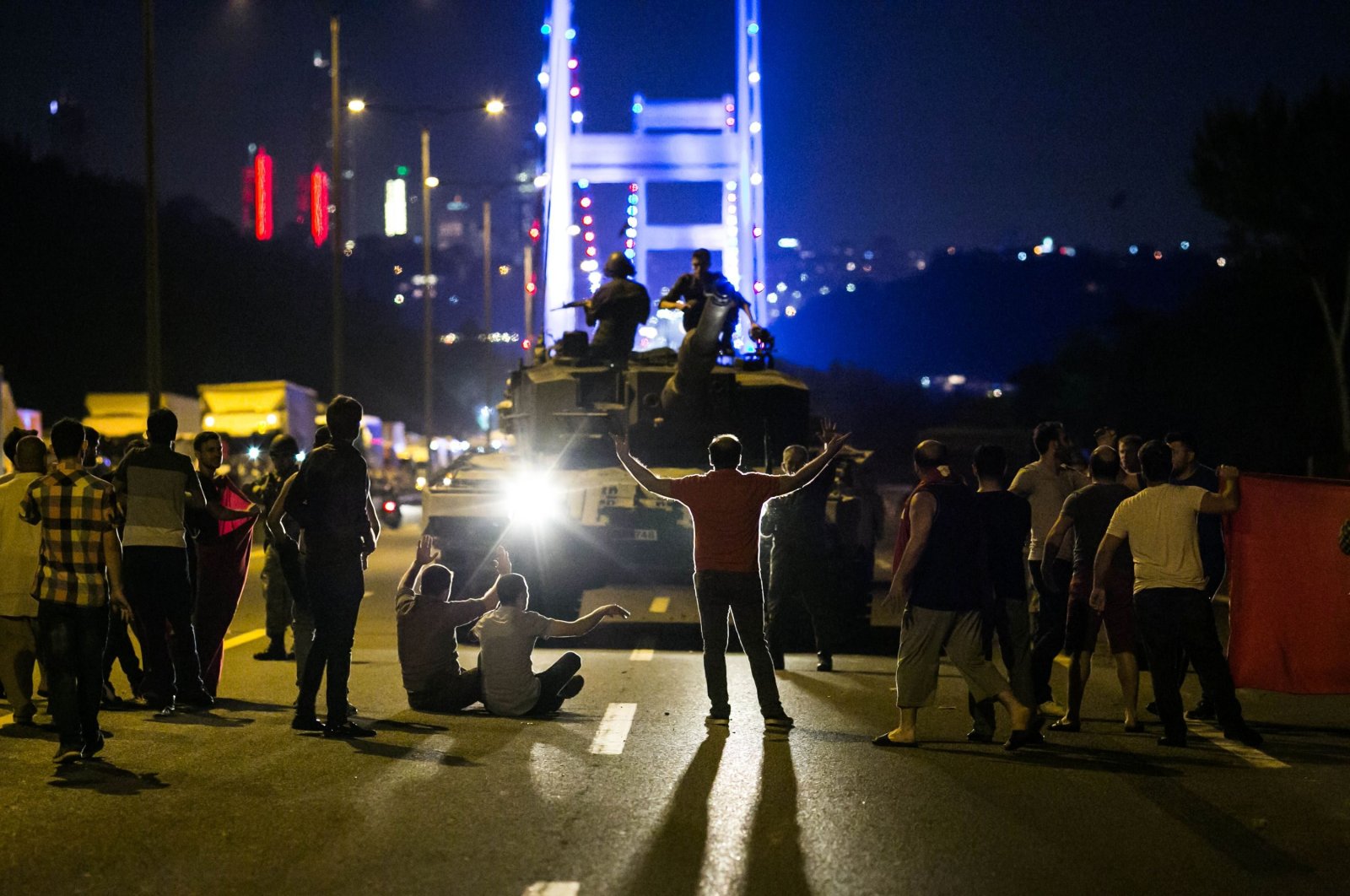 A declaration signed by 104 former admirals and published at night has stirred up Turkish politics, drawing strong reactions, while experts underline the conduct of the ex-officers was a mishap considering Turkey’s past coups

The so-called “declaration” recently signed by 104 retired navy admirals, which has drawn strong condemnation from the government and the public who claim the document implies interference in democratic institutions and the will of the public, evokes painful memories for Turkey, a country with a history of coups, experts said.

“I find the written warning text, the memorandum politically wrong because the signs and forms used revive negative memories from our history,” political scientist Ufuk Uras told Daily Sabah, saying that the underlying motives behind the issue will likely be revealed soon.

Saying that 104 admirals publishing a declaration in the middle of the night using their rank would receive a huge reaction and raise questions in any country around the world, political scientist Oğuzhan Bilgin said: “If this country is Turkey, a country with a history of coups and that has just recently experienced a coup attempt, this causes an even greater debate.”

“Turkey is, unfortunately, a country that has seen many coups – a country that tries to institutionalize and develop its democracy and civil politics against coups. Such a declaration at a time when the memory of coups is so fresh evokes this tutelage and the coup mentality,” Bilgin added.

Turkey on Monday detained 10 suspects as part of the probe into the declaration. The Ankara Chief Public Prosecutor’s Office launched an investigation based on Article 316/1 of the Turkish Penal Code, which is related to illegal armed organizations working against the constitutional order and the security of the state.

Gürdeniz is known to be one of the founders of Turkey's new maritime doctrine known as "Blue Homeland," which has become prominent, especially during tensions with Greece over Turkey's rights in the Eastern Mediterranean.

“The declaration the retired admirals wrote using their military title has divided the public opinion into two groups: those that saw the text as an expert text and those that perceived it as an attempt against the ruling party. This created an uncertain and chaotic atmosphere, which was maybe preferred by some,” Uras stated. Saying that some circles always love chaotic atmospheres, Uras stressed that it is not right to normalize an intervention into the political field “as if it was a weekend intellectual activity in the officer’s club.”

“Criticism toward the ruling (Justice and Development Party) AK Party has to be made on a legitimate political basis,” Uras underlined.

“Since Turkey could enter an atmosphere of elections as of next year, retired admirals will have the chance to express their political beliefs in political parties or in nongovernmental organizations (NGOs),” he added, saying that those that try to turn this crisis into an advantage must be invited to the legitimate political arena.

“Instead of perception wars that divide society, everyone’s main and common slogan should be the goal of further democratizing the republic in 2023.”

“This is perceived as an anti-democratic act not only against the current ruling party but also against the legitimate politics institution, Parliament, and all parties whether ruling or opposition,” Bilgin said.

He elaborated that there has been no problem with ex-admirals or ex-generals speaking to the media or voicing their opinion through online video-sharing platforms. “This can be evaluated within the framework of freedom of speech,” he said. However, Bilgin also pointed out that the admirals gathering around a declaration, signing it and above all, signing it with their title as “retired admirals” raises serious questions regarding democracy.

Coups are a sensitive subject in Turkey because the military, which has long seen itself as the guarantor of the country's secular Constitution, has staged coups several times in history.

“In the past, Turkey has faced such declarations that can be called memorandums many times. The fact that the admirals are retired does not mean it can be ignored or that we can legitimize the issue because retired admirals still have friends they worked with, and their subordinates still serve in the military,” Bilgin said, explaining that the publication of a declaration by admirals cannot be compared to that made by other occupational groups, such as a baker or barber association.

A powerful military tutelage made the country accustomed to interventions in its democracy. The first blow to Turkish democracy was on May 27, 1960, when a group of 37 relatively low-ranking officers instigated a military coup to topple the Menderes government, which had been in power since 1950. They accused the government of leading Turkey into a regime of oppression and down a path of political turmoil. Adnan Menderes, the country's first democratically elected prime minister, and ministers Fatin Rüştü Zorlu and Hasan Polatkan, were hanged in September 1961 after the notorious Yassıada Trials.

In the late 1960s, Turkey was experiencing hard times economically that caused unrest throughout the country. On March 12, 1971, a military memorandum was issued to "restore order," but it is widely referred to as the military's second intervention in the Republican era 11 years after the 1960 coup.

Sept. 12, 1980, was another date in the chronology of Turkey’s coups d'etat. The coup that changed the lives of millions today is remembered for its torture, civilian mistreatment and human rights violations that followed it. In the takeover's aftermath, there was a string of anti-democratic activities, from the closure of political parties to the banning of NGOs, as well as the removal of key politicians, who were briefly exiled, from the government.

The coup leaders’ most notorious practice was the death sentence. Turkey saw its highest number of executions by hanging in a very short period of time after the overthrow.

Bilgin also gave the 1963 Talat Aydemir coup attempt as an example of a retired military officer being involved in such an incident.

“Aydemir was a retired colonel yet, he tried to make a coup with his subordinates within the army and the forces loyal to him from the military college,” he stated.

Although it did not involve killings, Feb. 28, 1997, the post-modern coup, was a turning point in the history of the young republic.

The Turkish military, which considered even the slightest disruption a "legitimate" attempt to harm the country's security and secular state structure, dealt one of the heaviest blows the Turkish democracy has ever experienced.

The Turkish government at the time was run by a coalition led by then-Prime Minister Necmettin Erbakan’s Welfare Party (RP), but the military was apprehensive about the premier due to his party’s conservative leanings, alleging that the RP's supposed "Islamist" agenda was problematic.

Many public servants, officers and civilians were victimized when they were sacked from their jobs and sent to prison. Women who wore headscarves were denied education after the upper echelons in the Turkish Armed Forces (TSK) forced the elected government to resign under the guise of protecting secularism.

The AK Party came to power just after these incidents in 2002 and engaged in a struggle to prevent future military interventions in politics, which gained pace with the latest coup attempt by the Gülenist Terror Group (FETÖ) on July 15, 2016.

“The July 15 coup attempt also included some military leaders. One of these was a retired force commander. Considering the country's history, the signing of such a declaration by retired admirals cannot be labeled as freedom of speech,” Bilgin said.

He also stated that since the memory of coups is still fresh in the minds of the people, such incidents create a strong reaction. “Groups and political parties that have suffered from coups and that have opposed coups were always supported by the people in Turkey. Those that sided with the declarations always lost.”

Bilgin underlined that the declaration came at a time when Turkey was stepping up its struggle in the Eastern Mediterranean and in its foreign policy in general. He said there was no problem, contrary to the picture the admirals drew.

A total of 104 retired admirals signed the statement declaring their commitment to an international treaty that regulates shipping through the Bosporus and Dardanelles, which link the Mediterranean Sea to the Black Sea.

Plans to build an alternative waterway to the north of Istanbul that would bypass the Bosporus also sparked a debate over the Montreux treaty.

“The fact that withdrawing from the Montreux Convention was opened to debate as part of talks on Kanal Istanbul and the authority to exit from international treaties was met with concern,” the retired admirals said in their declaration.

The statement triggered strong condemnation from the ruling party and government officials, who drew a parallel with statements that accompanied past military takeovers in Turkey.

Erdoğan voiced commitment to the shipping treaty but did not rule out its revision in the future.

“We neither have any current plans nor any intention with regard to leaving the Montreux Convention. But if the need arises in the future, we will not hesitate to review any convention to ensure that our country gets a better deal,” he said.

Uras stated that if there was another motivation behind the declaration of the admirals apart from the Montreux Convention or pictures that emerged of an admiral in religious clothing seen at a prayer meeting, which was interpreted as an anti-secularist trend, then “they should have voiced this openly.”

He added that the admirals must have known that statements such as “going against the principles of (Mustafa Kemal) Atatürk” could affect ranks in the army.