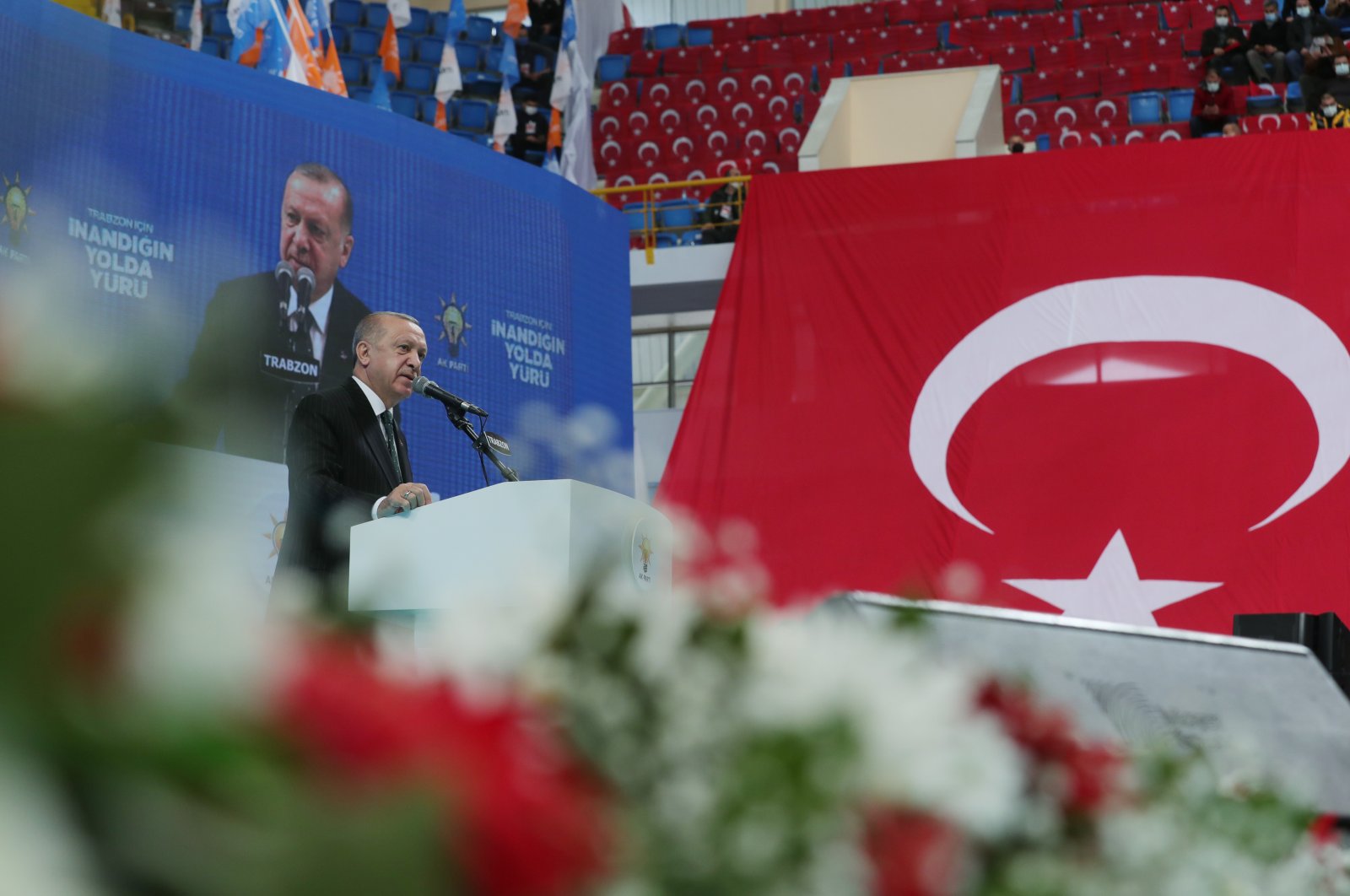 President Recep Tayyip Erdoğan slammed Western countries on Tuesday for remaining silent in the face of ruthless attacks by the PKK terrorists.

Speaking at the ruling Justice and Development Party's (AK Party) congress in northern Trabzon province, Erdoğan said Turkey is determined to eliminate the terrorists, who recently executed 13 Turkish citizens in a cave in the Gara region in northern Iraq.

"I call on the West: Where are you? Why are you so silent? If such an incident were to happen in a Western country, you would not stay quiet. Whether you speak up or not, we will not allow any further terrorist attacks on our people," Erdoğan said.

He continued by saying that Turkey will not wait for the terrorists to come to its door.

"We will smash them in their caves," he said, adding that the Gara region was a problematic area in terms of the PKK presence but it has been liberated after the Turkish counterterrorism operation.

Erdoğan further expressed that Gara was a problematic era (in terms of the PKK presence). "Since Gara is liberated now," he continued, "there are no longer problems there."

Upon the announcement, a series of condolences poured in from Turkey's friends and allies.

One of the most recent messages came from the Turkic Council on Monday. In a statement, the council's Secretary-General Baghdad Amreyev "strongly condemned" the treacherous terrorist attack.

"I wish God's mercy on the martyrs who lost their lives in this heinous attack, convey our condolences to their families and the people of Turkey and wish a speedy recovery to the wounded," he said.

"We offer our condolences to the families of the martyrs, the people of Turkey, and the Turkish state," he said. "May Allah protect Turkey from all kinds of evil."

The Palestine Scholars Association in the Diaspora also condemned "the treacherous terrorist crime."

Bosnia-Herzegovina was another nation to denounce the brutal killing on Monday.

"We extend our sincere condolences to the President of the Republic of Turkey, Recep Tayyip Erdoğan, the families of the victims and the entire Turkish people," the Bosnian Presidency said in a statement.

The Afghan Foreign Ministry in a statement described the targeting and killing of civilians as contrary to humanity and Islamic values.

Other states that also reached out to Turkey in light of the attack were Pakistan, Somalia, Bulgaria, Iran and Qatar.

The Western countries, however, mostly remained silent on the issue, and some of the already few number of condolences were problematic rather than supportive.

"The United States deplores the death of Turkish citizens ... We stand with our NATO ally Turkey and extend our condolences to the families of those lost in the recent fighting. If reports of the death of Turkish civilians at the hands of the PKK, a designated terrorist organization, are confirmed, we condemn this action in the strongest possible terms," the U.S. State Department spokesperson Ned Price said in a statement considered by Ankara as problematic. Although during a phone call with Foreign Minister Mevlüt Çavuşoğlu, his U.S. counterpart Antony Blinken clarified the statement by underlining that the PKK was responsible for the attack, the damage was already done.

Erdoğan on Monday criticized the U.S. statement. Speaking at the ruling Justice and Development Party (AK Party) congress in the Black Sea province of Rize, Erdoğan said that Washington has sided with the PKK and its Syrian branch, the YPG, providing truckloads of ammunition to them.

"The U.S. statement on the PKK’s execution of Turkish citizens in northern Iraq is ridiculous. They claim they do not support the PKK, but they certainly do," he also said. "If you want to continue our alliance globally and at NATO, then you must stop siding with terrorists."

"The U.S. has exposed its cooperation with the PKK in its statement on the Gara massacre," Bahçeli told fellow party members at his parliamentary group meeting in the capital Ankara on Tuesday.

Bahçeli criticized Washington’s choice of words, referring to the "ifs" and "buts," accusing it of trying to "save" the group by refraining from naming the terrorists.

He described the Gara massacre as a breaking point in Turkey's counterterrorism operations, saying that from this point on the strategies executed will never be the same. Bahçeli denounced the terrorist ringleaders, saying they should be "buried" in the caves and calling for all those who stand with terrorists to be punished.

“We need to reach the centenary of the republic by putting an end to terrorism,” Bahçeli said, adding that all parties must revise their stances on the matter.

Another NATO ally, the U.K., has become another western country that shared its condolences.

"We have seen deeply troubling reports about the killing of 13 Turkish citizens by the PKK, a designated terrorist organization, in northern Iraq last week," Peter Stano, EU Commission spokesperson, told Anadolu Agency (AA) and added: "We would like to offer our condolences to the Turkish people and express our heartfelt sympathies to the families of the victims."