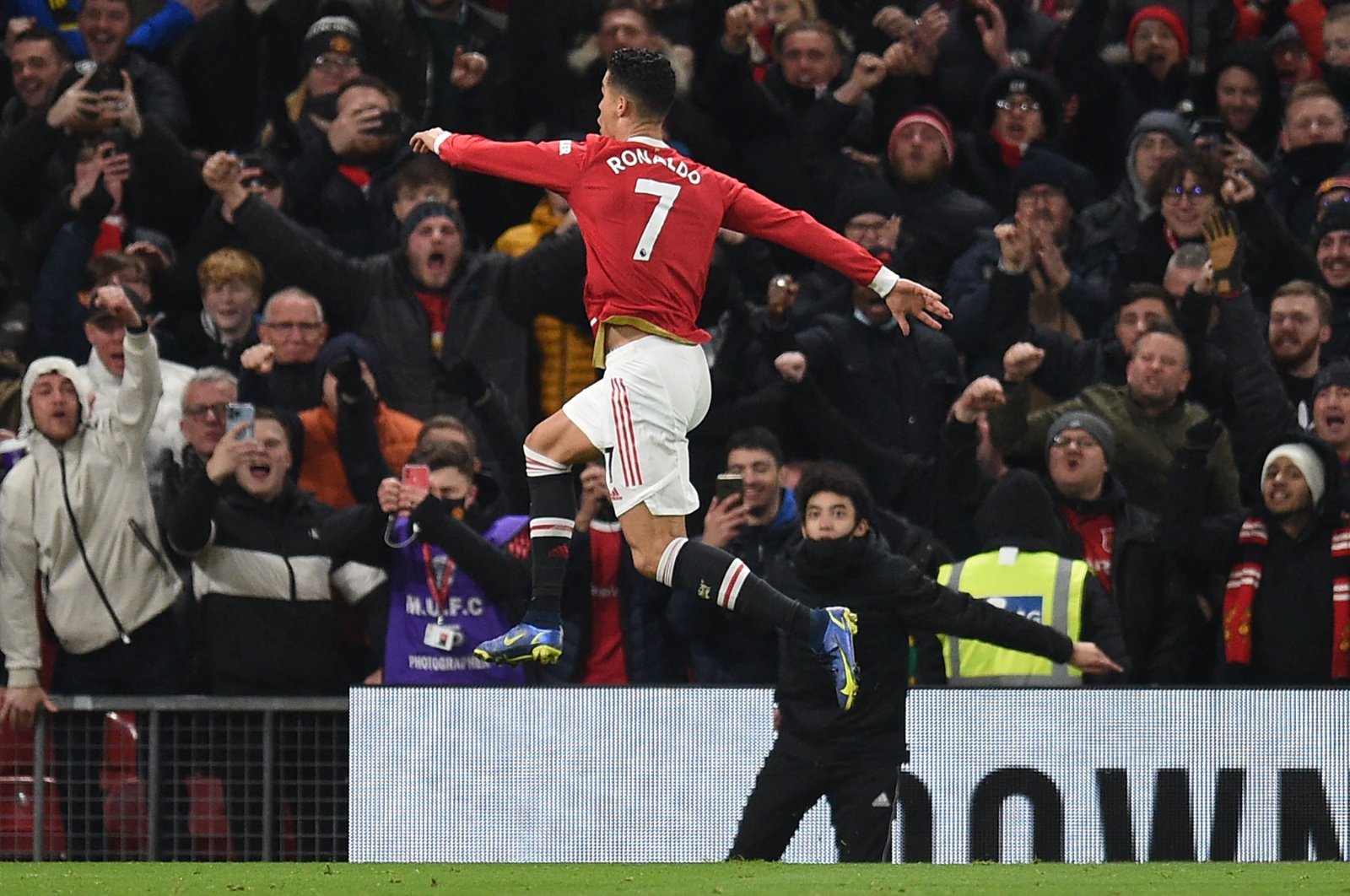 Manchester United's Portuguese striker Cristiano Ronaldo (C) celebrates after scoring the team's second goal, his 800th for the club and the country in his career, during the English Premier League football match against Arsenal at Old Trafford in Manchester, England, Dec. 2, 2021. (AFP Photo)
by Agencies Dec 03, 2021 9:56 am
RELATED NEWS

Thursday's tough tie between Manchester United and Arsenal saw the Red Devils defeat the London side 3-2 under their new manager and their top player hitting a whopping 800-goal mark.

United, with Michael Carrick on the bench as caretaker manager, was watched by its new interim manager Ralf Rangnick and after the match, Carrick announced he was leaving the club.

Carrick, who said the decision was "100%" his own, was unbeaten in his three matches in charge of the team after taking over following the sacking of Ole Gunnar Solskjaer last month.

United's fans paid tribute to Solskjaer before the game with a banner in the Stretford End declaring "20-Legend," a reference to the Norwegian's old shirt number.

But it was another legend, Cristiano Ronaldo, who took center stage during an end-to-end game.

Arsenal took the lead in bizarre fashion in the 13th minute when from a corner United keeper David De Gea went down clutching his foot after he was stood on by teammate Fred and Emile Smith Rowe drilled a shot into the unguarded goal from the edge of the box.

As referee Martin Atkinson had not blown his whistle before the ball went into the net and no foul had taken place, the goal stood.

United's protests were to no avail, but it fought back to level terms a minute before the interval through a Bruno Fernandes strike after a delightful back-heeled set-up from Fred.

Ronaldo put United in front in the 52nd when Diogo Dalot found Marcus Rashford on the right and the winger's low cross was clinically converted for the Portuguese forward's 800th goal.

The Gunners struck back quickly through Martin Odegaard who arrived on the edge of the box to guide home a fine low ball from Gabriel Martinelli.

But Ronaldo notched the winner from the penalty spot after Atkinson went to the pitchside monitor and ruled that Fred had been brought down by Odegaard. Followed by his trademark pirouette-in-the-air celebration, the goal marked his 801st for his career for club and country.

"What can you say about him,” Fernandes said of the 36-year-old Ronaldo. "He is proving game by game, season by season, year by year, he wants to keep being the best.”

Ronaldo has scored 12 goals in 17 games for Manchester since returning for a second spell while scoring a total of 130 goals for the Red Devils across two spells. He also scored 450 goals for Real Madrid, 101 at Juventus, five for Sporting Lisbon and is the record goalscorer in international football with 115 for Portugal.

United climbed to seventh in the table, two points and two places below Arsenal and a massive 12 points adrift of leader Chelsea.

"Every win is important. It's been hard for us. Today we got a great win. We can be satisfied because we beat Arsenal," Fernandes said.

Carrick, a former United midfielder, announced his decision immediately after the final whistle, bringing a close to his 15 years at the club.

"It’s not been an easy decision to make but I feel it’s the right one. I was going to take time off after I finished playing and it never happened. It feels like the right time to step away and what a way to finish," Carrick said in a statement.

"If you concede three goals at Old Trafford it is difficult to get a result. I was disappointed with the goals that we conceded," he said.

"There were a lot of things that I liked in the game. I liked the behavior of individuals. When you score two goals at Old Trafford you expect to get something from the game and that is a regret, but that is our fault. That is what happens against this quality of opponent."

Rangnick received his work permit hours before the match and will take charge for the first time against Crystal Palace at home on Sunday.