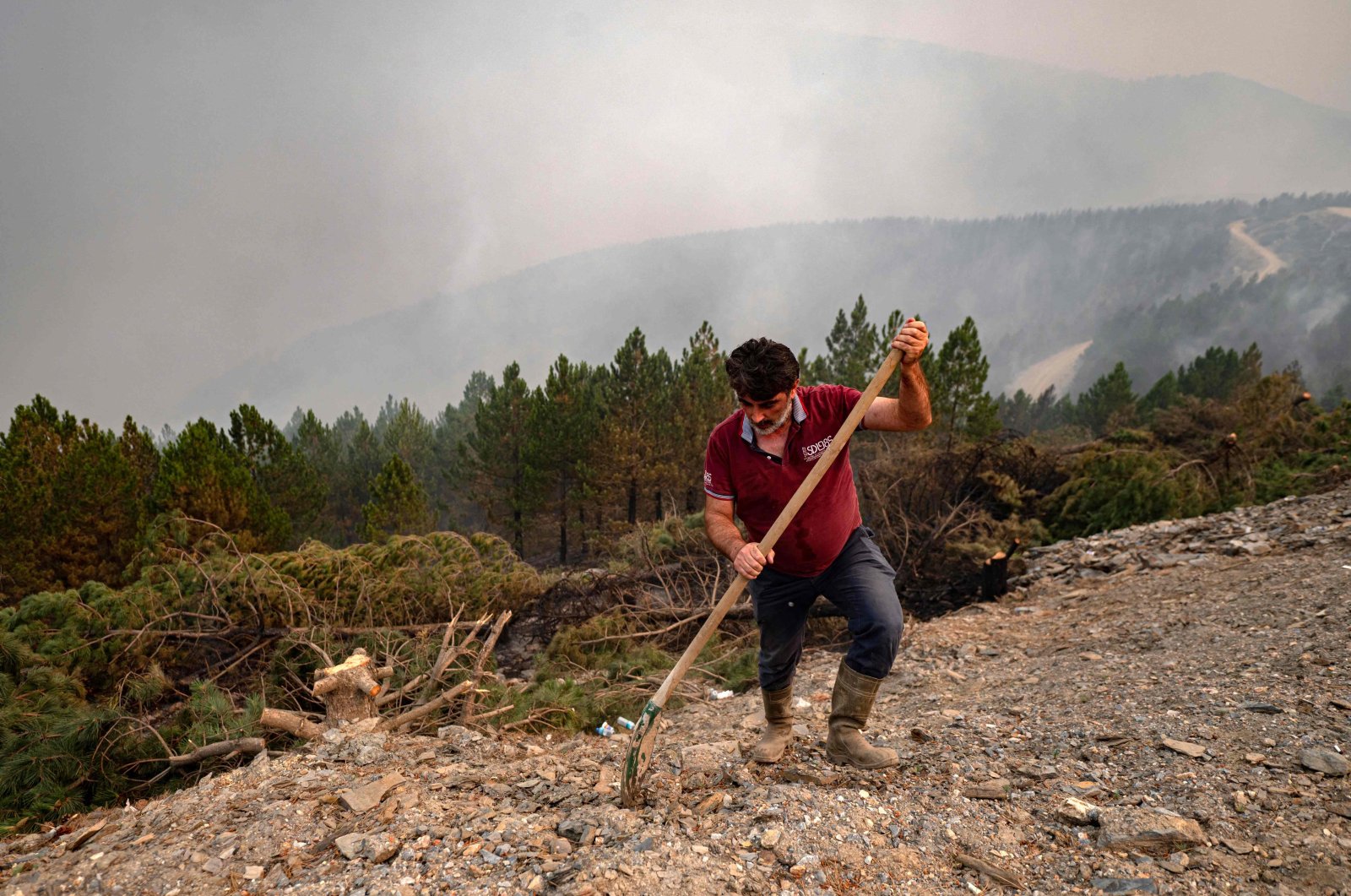 A volunteer from a nearby village uses a shovel to help contain smouldering forest fires in the hills of a recently burnt area near Kavaklıdere, a district of Muğla province, Turkey, Aug. 5, 2021. (AFP Photo)
by Daily Sabah with Agencies Aug 08, 2021 12:07 pm

As Turkey continues its fight against the forest fires, support has poured in from many people and countries while an official fundraising drive collected nearly $2 million in a single day

As forest fires continue threatening Turkey, countries have lined up to offer their condolences, messages of solidarity and airplanes to help the country fight the fires.

Meanwhile, the Chairperson of the Union of Chambers and Commodity Exchanges of Turkey (TOBB) Rifat Hisarcıklıoğlu said in a statement that a fund drive has been officially approved to collect money after legal applications.

Noting that the nation has unified in the wake of the forest fires, Hisarcıklıoğlu added that they collected a sum of TL 15.5 million (over $1.7 million) in a single day.

“No matter what their political views are, people have united for a cause,” he said.

The 25-year-old Nifteliev Yusif and 32-year-old Hemidli Behram went to the Turkish Red Crescent coordination center in southwestern Muğla province’s Menteşe district to speak to their families over video call. Upon learning about their birthdays, Turkish Red Crescent volunteers surprised the two with birthday cakes complete with lit candles.

The Menteşe branch chairperson of Turkish Red Crescent Kenan Gürbüz said in a statement that Turkey is grateful to the Azerbaijani people for their efforts to extinguish the fires.

“These birthday celebrations have been a rare opportunity to smile during these trying times,” he said.

Azerbaijani President Ilham Aliyev recently stated in a phone call with his Turkish counterpart Recep Tayyip Erdoğan that Azerbaijan stands with Turkey in its fight against forest fires that have been affecting the country's southwestern region for 10 days.

According to the statement released by Baku, Aliyev once again conveyed his condolences for those who lost their lives as a result of the severe forest fires that occurred in various parts of Turkey and stated that they stand by Turkey in extinguishing the fires and preventing their consequences.

Aliyev stated that 40 more fire trucks had set off for Turkey and would reach the fire area tomorrow, and thus the number of vehicles sent from Azerbaijan to fight fires in Turkey will reach 93.

Stating that 510 Azerbaijani personnel, a helicopter and an amphibious aircraft belonging to Azerbaijan participated in the firefighting efforts in Turkey, Aliyev suggested sending another group of 200 specially trained firefighters and thus increasing the number of personnel to 710.

President Erdoğan thanked Aliyev for his condolences and support for Turkey.

Erdoğan noted that Azerbaijani firefighters participated in the firefighting efforts in Turkey with a high level of professionalism and love.

Expressing his gratitude for the additional support to be sent from Azerbaijan, Erdoğan stated that this support is a clear manifestation of the brotherhood and friendship between Azerbaijan and Turkey.

As forest fires continued threatening Turkey, countries lined up to offer their condolences, messages of solidarity and airplanes to help the country fight the fires.

Erdoğan on Tuesday thanked the countries that were sending aid, expressing condolences and stating a readiness to assist in Turkey’s fight against blazes tearing through forests and villages on the country's southern coast.

Strong winds and scorching heat have prolonged fires mostly raging in and near popular vacation destinations, including Marmaris in Muğla and Manavgat in Antalya. Flames advanced toward residential areas for days, prompting the evacuation of hundreds of people. In rural neighborhoods of Antalya, dozens of houses were devastated by the fires, leaving a large number of people homeless. Fires in Antalya and Muğla left at least eight people dead.

At least 770 people have been affected by the fires, with six of them currently receiving treatment in hospitals, Foreign Minister Mevlüt Çavuşoğlu also said in a recent statement.

As many as 1,352 buildings are seriously damaged or completely destroyed.

So far, almost $2 million (TL 17 million) has been distributed for 1,055 families affected by the fires, Çavuşoğlu said, adding "we will quickly provide financial aid for citizens in areas which have been damaged." The minister also said that the U.S. has offered to send two helicopters to help Turkey battle the massive fires and that the two countries are now working on the details. Poland also offered support to the country. The Polish Embassy in Ankara announced that a crew of 14 people, including six firefighters and eight police officers, a police helicopter and a fire truck will be dispatched to Turkey from the European country on Friday and Saturday. On Friday, President Erdoğan announced that Azerbaijan would be dispatching an additional 100 personnel highly trained in firefighting, plus five helicopters with nighttime operations capability have arrived from Ukraine.

The government has put extraordinary efforts into fighting the fires since they erupted nine days ago, Minister of Transport and Infrastructure Adil Karaismailoğlu said at the same press conference. "We will make great efforts to remove the traces of this disaster," he stressed. Noting that they are visiting the neighborhoods affected by the fires one by one, he said they are determining the needs of people on the ground. "We continue to work effectively and in coordination with all our ministries and relevant institutions to meet these needs quickly," he added.

A heat wave across southern Europe, fed by hot air from North Africa, has contributed to wildfires breaking out across the Mediterranean, including in Italy and Greece. The heat wave is forecast to continue in Turkey and Greece until the end of the week. On Thursday, Agriculture and Forestry Minister Bekir Pakdemirli suggested the creation of a mechanism under which Mediterranean nations would assist each other in combating forest fires. "The time has come for a Mediterranean union to fight against forest fires because it is clear that from now on we will have to live with hot weather and global warming," he said.

The fires were the most devastating in recent memory, at the height of “forest fire season” during the summer. The average size of forests ravaged by yearly fires was 17,578 hectares between Jan. 1 and Aug. 5, since 2008. This number for the same period of 2021 stands at 157,482 hectares, according to a study by scientists at Cerrahpaşa Faculty of Forestry at Istanbul University. Professor Yusuf Serengil, a member of the faculty, told Anadolu Agency (AA) Friday that Turkey was going through one of the worst wildfire disasters in years. Serengil said climate change was one of the important actors in the rise of the number of wildfires.

“We are seeing the impact of climate change much earlier than expected and in a more intense way. Rising temperatures cause vaporization. Combined with irregular patterns of precipitation, this prolongs the fire season,” he noted.

He also pointed out the “human factor” in the surge in forest fires. “Residential areas are expanding and both housing and industrial units are closer to the ecosystem of plants and animals. Forests are also under pressure due to the growing population, with more people using forests, for example, for picnics. Other factors heightening the risk of fires are roads going through forests or near them, and infrastructure works in areas with forests,” he explained.