Pandemic may ease in Turkey by November, official says 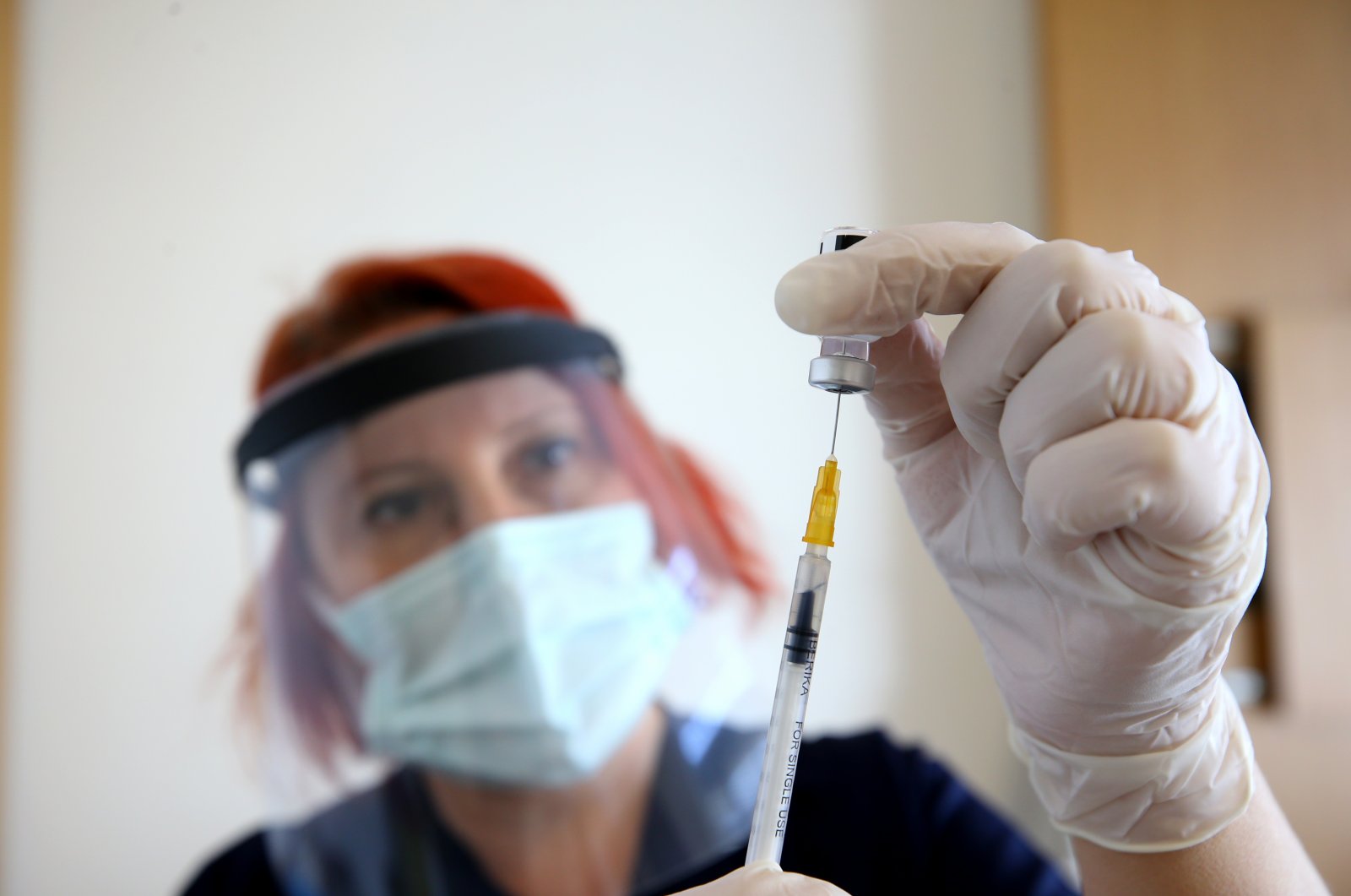 A nurse holds a Pfizer-BioNTech vaccine vial and a syringe at the Kırklareli Education and Research Hospital in Kırklareli province, northwestern Turkey, April 30, 2021. (AA Photo)
by Daily Sabah with Agencies May 02, 2021 2:59 pm

As the nation continues its vaccination efforts, the country has enacted a total COVID-19 lockdown. A Coronavirus Scientific Advisory Board member says that Turkey may enjoy a better period in autumn if all goes well

The coronavirus pandemic may ease by the end of October in Turkey, just in time to celebrate Republic Day on Oct. 29, a member of the Coronavirus Scientific Advisory Board, professor Mustafa Necmi Ilhan, told Demirören News Agency (DHA) on Sunday. He noted that this will only be possible if hygiene and social distancing measures are properly followed and vaccinations continue as planned.

“If the total lockdown pushes the COVID-19 infection rates to lower levels, our citizens under the age of 40 are vaccinated by the end of June and youngsters are also inoculated by the beginning of autumn, we may consider our Republic Day to be an even more joyful date,” he said.

A full 17-day lockdown officially began on Thursday evening, but its impact was more evident on Friday when big cities were devoid of all the usual hubbub. In Istanbul, the country’s most populated metropolis, however, crowds were visible in the early hours of Friday morning, so much so, authorities had to add new metro services. Traffic jams were also reported on the city's usually busy roads. Snarls in traffic were mostly related to checkpoints set up by security forces across the city to check motorists for violations of the lockdown.

Elsewhere, a few people were out and about in the country, including those exempt from the lockdown and people out for shopping for groceries and other basic needs. Security forces patrolled the streets, while checkpoints were set up on roads connecting cities to enforce an intercity travel ban. Violating the lockdown carries a fine of TL 3,150 ($381).

Underlining that everyone should act according to what the science deems necessary, he emphasized that vaccination is key.

“We are observing that vaccinated societies are living a more normal life. So, people should get vaccinated,” he said, calling upon Turkish society to not fall for hoaxes and anti-vaccination fears.

“There have been, unfortunately, deaths from COVID-19 among the people who were due to be vaccinated but rejected to be so. If those people chose to be vaccinated, they would recover from the disease easily. That’s why being vaccinated is so crucial,” he said.

“Nearly a million health workers have been vaccinated so far. When we take a look at the infection rates among them, we see that they have decreased four times between Jan. 1 and April 1,” he also said, emphasizing the effectiveness of the vaccines.

Ilhan also said that it is “incomprehensible” that people have negative views with regards to vaccines.

“The resistance against vaccines is not understandable,” he said.

“Of course, if evidence pointing to their negative effects surface, it can be discussed. But science moves forward with evidence,” he said, adding that there is none.

“If evidence, if a scientific article is released with regards to these vaccines’ negative effects, then we can debate. But it is not wise to go on social media to say ‘I’m not going to be vaccinated,’” he said.

Ilhan also said that the country may experience a vaccine shortage from time to time but it can diversify its supply.

“If the development of our local vaccines is also finalized, we will have even more options,” he concluded.

The Health Ministry recently issued emergency approval for Russia’s Sputnik V vaccine, making it the third COVID-19 vaccine available for use in the country.

Though Turkey has yet to receive a shipment of the vaccine, the health minister announced that they would acquire the jab soon. Erdoğan has also confirmed the expected delivery of the vaccine.

Erdoğan said Turkey does not have any problem regarding its COVID-19 vaccine supplies. “We have enough vaccines for now. We held talks with Russia and we will bring in the Sputnik V vaccine,” Erdoğan told reporters in Istanbul on Friday.

His remarks come at a time when the number of shots administered against the virus crossed more than 22.7 million. Some 13.7 million people had their first shots while more than 9 million have received the second dose of the vaccine.

The president said he would also talk to Russian President Vladimir Putin and expected that Turkey would obtain “a serious amount of Sputnik vaccine” after the meeting. He also mentioned that they were set to receive more shipments of the Pfizer-BioNTech vaccine from Germany. He noted that they also planned to receive a high amount of CoronaVac, the first vaccine used in Turkey, from China, after he discussed the vaccine delivery issue with China's President Xi Jinping.

The country once ranked sixth in terms of vaccination in the world but the drive has somewhat slowed down. Experts tie it to challenges in vaccine deliveries, something the health minister recently partly acknowledged. But authorities are also concerned that anti-vaxxers and vaccine skeptics may affect the inoculation drive.

Additionally, Turkey's lockdown is not as strict as measures applied in European countries to curb the pandemic. It is rather a longer version of its weekend lockdowns and weekday curfews that were already in force in the weeks prior. Turkey hopes to drive down daily coronavirus cases to "less than 5,000," according to Erdoğan, who announced the lockdown after a Cabinet meeting earlier this week.

In addition, an intercity travel ban was imposed, though most people had already left big cities over the previous two days, seeking to spend the upcoming Ramadan Bayram, also known as Eid al-Fitr, with relatives in other cities. Others traveled to popular vacation resorts that offer more freedom of movement than big cities.