Turkey aims to start mass vaccination against COVID-19 by Friday 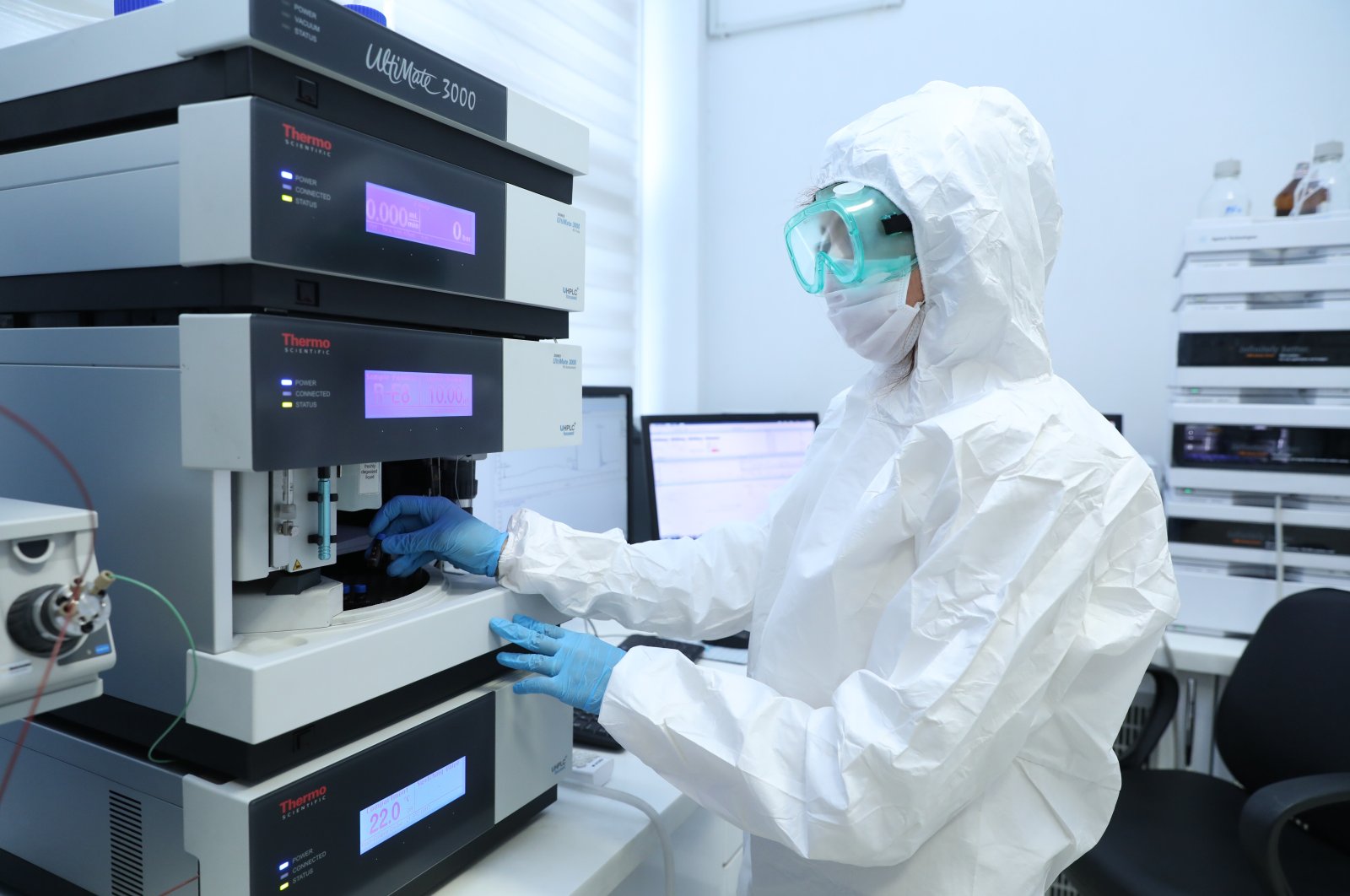 A staff member analyses a sample from CoronaVac during its approval process at a Health Ministry lab in the capital Ankara, Turkey, Jan. 6, 2021. (AA PHOTO)
by DAILY SABAH WITH AGENCIES Jan 11, 2021 11:05 pm

The first members of the public will receive coronavirus jabs on Thursday or Friday, the authorities announced, while the country puts the finishing touches on its nationwide inoculation plan with an app and steady supply of vaccines

For millions in Turkey, the long wait for a coronavirus jab will likely come to an end by Friday. Speaking after a Cabinet meeting on Monday evening, President Recep Tayyip Erdoğan assured the nation that the country's mass vaccination campaign will launch on either Thursday or Friday.

"With the number of COVID-19 cases falling below a certain number, we will ease the restrictions gradually, as we did before," he added.

The first batch of 3 million doses of China's SinoVac Biotech vaccines arrived in Turkey on Dec. 30, followed by a trial in Turkish labs.

Erdoğan also pointed to Turkey one day fulfilling its own vaccine needs, saying: "The most important thing is to develop our own vaccine. Many of our universities, institutions and companies are making serious efforts toward that end."

Since March, when the first cases were reported in the country, Turkey adopted and eased measures based on coronavirus trends at the time, managing to curb the number of cases for a while. A sharp rise in the cases last autumn prompted authorities to reinforce the restrictions lifted in the summer. Following weeks of surging numbers, the country appears to have the outbreak under control once again. Daily cases now fluctuate around 10,000, compared to nearly 20,000 last month, while the daily number of fatalities has dropped below 200. The total number of cases stands at more than 2.3 million while the overall death toll nears 23,000. Recoveries, on the other hand, have exceeded the 2.2 million mark.

Several media outlets reported Tuesday that the Health Ministry will receive vaccines developed by Pfizer-BioNTech within the next 10 days, which will be administered after they are tested at ministry laboratories.

Health care workers on the frontline in the fight against the pandemic will be the first to get the jabs, followed by those in the high-risk category, including senior citizens. While the vaccine is not mandatory, experts continue to urge the public not to feed into what the skeptics and anti-vaxxers are purporting, throwing off the progress made and endangering public health. However, citizens will be required to sign a document of consent before receiving the jabs, according to the Turkish media.

Last week, the Health Ministry ordered that special vaccination rooms be established in hospitals and clinics, keeping a safe distance from other parts of the medical facilities during the inoculation drive. Vaccines are set to be delivered across the country soon. Turkey can rely on its strong cold chain infrastructure for the timely, regulated, safe delivery of vaccines. On Monday, trucks which can carry up to 90 cubic meters of cargo and will distribute the vaccines, were shown to the press in the capital Ankara. Trucks are fitted with special cold storage and tracking system, enabling the authorities to monitor the entire process. Once the Health Ministry grants "emergency use approval" following random testing on imported vaccines, deliveries will commence.

Turkey launched a Vaccine Tracking System in 2014 to monitor all processes involving vaccines. Using the QR codes required in the country on vaccine doses against any illness, authorities have the ability to monitor storage, delivery and expiration dates as well as intervene at any point along the way.

The Health Ministry also introduced a mobile app called "aşıla" (vaccinate) to track vaccines. The app, which health care personnel are free to use, will allow them to schedule vaccinations. The app allows health care workers to determine whether a candidate is suitable for vaccination and to track when second doses should be scheduled.

Citizens will be inoculated with two doses, with a 28-day interval between two doses, to allow the body time to produce the antibodies necessary to protect itself against the virus.

Experts say the mass inoculation campaign does not mean that the pandemic is over and warns that the public must continue to adhere to the rules, even for a while after the vaccination drive ends.

Although SinoVac’s CoronaVac will be the first vaccine to be deployed against the virus in Turkey, the country hopes to tap into its own resources in its nationwide inoculation. Several locally made vaccines are expected to be ready for approval in the next few months. On Tuesday, scientists behind one of the locally-made vaccine candidates announced they had successfully completed animal trials. Associate professor Mert Döşkaya from Ege University in the western province of Izmir, said in a written statement that the two vaccine prototypes they developed received a strong cellular response in animal trials and they would soon launch clinical trials.

Ege University's DNA vaccine is among more than a dozen vaccines developed with the support of the COVID-19 Platform by the Scientific and Technological Research Council of Turkey (TÜBITAK).

The country's leading COVID-19 vaccine candidate is currently in Phase 2 trials and is being jointly developed by Erciyes University and Koçak Pharma. The country hopes once it is approved, it can be rolled out by April.