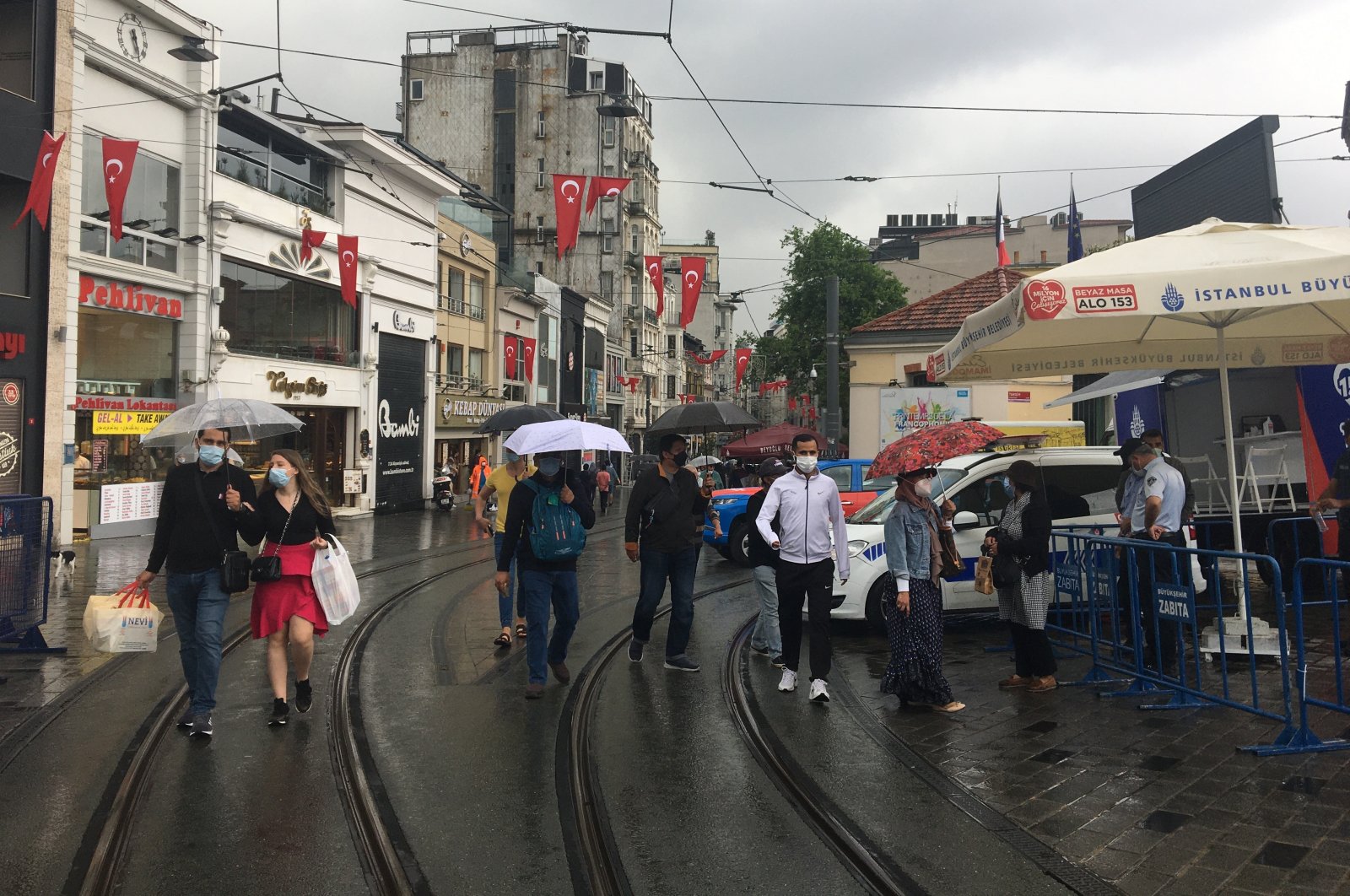 People wearing masks walk amid rainy weather at the entrance of Istiklal Avenue at the famous Taksim Square in Istanbul, Turkey, May 29, 2021. (IHA Photo)
by Daily Sabah with Agencies
May 30, 2021 2:49 pm

Two weeks of gradual normalization is nearly over as infections continue to fall. After the upcoming Cabinet meeting, restrictions are expected to be relaxed even further as the vaccination drive moves forward

As Turkey counts down to June 1 for a planned normalization process, a cabinet meeting to further relax COVID-19 restrictions will take place at the Presidential Complex in capital Ankara Monday.

Chaired by President Recep Tayyip Erdoğan, the meeting is expected to ease the mandatory mask rule as part of a gradual normalization process.

According to the Hürriyet daily, authorities are considering ending the rule with a few preconditions. In open-air public spaces like parks, masks will not be mandatory as long as people maintain the two-meter (6.5-foot) social distancing rule.

The normalization follows a 17-day lockdown that ended earlier this month. However, some restrictions, including nighttime curfews that start at 9 p.m. every day and a 56-hour lockdown over the weekend, remain in place. Masks are mandatory everywhere, while restaurants and cafes are only open for takeaway services.

Media reports also claimed that the normalization process will see a reopening of restaurants and cafes under the condition they only fill 50% of their capacity and serve a limited number of customers. The rescheduling of nighttime curfews is also planned and they are expected to start later than 9 p.m.

Authorities have signaled that a gradual normalization process will start on June 1, in a process similar to the relaxing of restrictions that occurred on the same day last year – a few months after the pandemic made its foray into the country.

The news comes a day after the Health Ministry’s Coronavirus Scientific Advisory Board convened to discuss the process. The board advises the government on pandemic-related measures.

The country managed to bring down its daily case numbers to just over 7,600 on Saturday, a considerable drop compared to the numbers fluctuating around 50,000 last month.

The government first started a normalization process in March, after assigning risk categories to each of the 81 provinces, allowing each province to implement its own measures or relax them. But the idea was scrapped soon after when a sudden surge in cases was seen all over the country. Before announcing the lockdown, Erdoğan had voiced the country’s desire to bring the daily case numbers down to around 5,000. Experts say the lockdown largely paid off but more vaccination is needed to further decrease them.

Health Minister Fahrettin Koca recently said Turkey will accelerate its vaccination campaign as of June 1 when it will start inoculating citizens aged 50 and above.

After a meeting with the Coronavirus Scientific Advisory Board, Koca also announced that Turkey will soon use its own vaccine.

"I would like to share the good news that we will soon be administering our own COVID-19 vaccine."

He further added, "With current developments and plans for normalization, it has become clear that we will recover from the devastating impact of the outbreak this summer."

Furthermore, Turkey has signed deals to procure 270 million doses of the COVID-19 vaccine, "which is more than three times our population."

"At the beginning of next week, about 5 million doses of vaccine will reach our country," Koca said.

Koca also previously stated that Sinovac, the Beijing-based firm behind CoronaVac, had granted Turkey authorization to produce the vaccine but that production would not start for a few months. The health minister noted that 10 million CoronaVac vaccines are expected to be delivered to Turkey within the week.

Turkey started administering CoronaVac jabs to health care personnel in January and the president himself was vaccinated with the inactive vaccine. Recently, authorities also started giving the Pfizer-BioNTech vaccine to citizens who opt for it. Media reports also said the authorities were in talks to acquire the Moderna vaccine.

Work is also underway on locally made vaccines that range from an inactive vaccine to an intra-nasal spray and a virus-like particle (VLP) vaccine.

Erdoğan told reporters recently that universities and pharmaceutical companies are working hard and he expected “mass production” would start in September or October “based on what they pledged.”

Industry and Technology Minister Mustafa Varank announced Friday that an innovative vaccine developed by Turkish scientists against the coronavirus is set to start Phase 2 trials.

Varank, himself a volunteer in the vaccine trial, said at least 480 new volunteers were needed for the next phase of the VLP vaccine.

The jab has been developed as part of the COVID-19 Turkey Platform, an initiative coordinated by the Scientific and Technological Research Council of Turkey (TÜBITAK) that includes vaccine and medicine studies against the deadly disease.

The VLP vaccine is being developed by a team of researchers led by professor Mayda Gürsel and her husband Ihsan Gürsel, two renowned scientists from Middle East Technical University (METU) and Bilkent University in the capital Ankara respectively.

Thirty-eight volunteers were given the jabs in the first phase of the study. Scientists say they are developing the vaccine to be effective against both the original coronavirus that emerged in China’s Wuhan and its British variant that later took hold in most of the world, including Turkey. Phase 3 trials are expected to be conducted with more than 10,000 volunteers in dozens of centers across the country if Phase 2 succeeds.

The vaccine is one of its kind for Turkey, where scientists are racing against time to develop inactive, adenovirus and other types of vaccines against coronavirus disease. It was the fourth vaccine to be included on a list of World Health Organization (WHO) vaccine candidates on March 30.

The VLP vaccine works by mimicking the coronavirus, in a way not to cause infection. Currently, there are four VLP vaccine candidates in the world. The Turkish jab differs from others by using the virus’s four structural proteins as a vaccine antigen, according to scientists.

The country has also approved the use of Russia’s Sputnik V vaccine.

“If the vaccines arrive in full, Turkey may end the pandemic this summer,” he said.

“I see the bright light at the end of the tunnel. The most important thing to end the pandemic is to inoculate people, as seen in countries with high vaccination rates,” he said.

“It is impossible to end the pandemic without vaccines,” Hotamışlıgil added.

“After the first dose, there is a strong protection” against infection, he said.

Official figures have also shown that Turkey has administered over 28.76 million doses of COVID-19 vaccines since the launch of a mass vaccination campaign in mid-January.

As of Saturday evening, more than 16.47 million people have received their first doses, while over 12.28 million have been fully vaccinated, the Health Ministry's count showed.

The ministry also confirmed 7,656 new coronavirus cases, including 605 symptomatic patients, across the country in the last 24 hours. The number of new cases on Friday was 7,773.

Turkey's overall case tally is now over 5.09 million, while the nationwide death toll has reached 47,271 with 137 new fatalities.

As many as 11,180 more patients won the battle against the virus, surging the total number of recoveries past 5.09 million.

Over 53.7 million coronavirus tests have been done to date.

The latest figures put the number of COVID-19 patients in critical condition at 1,391, down from Friday's count of 1,454.

Since December 2019, the pandemic has claimed over 3.52 million lives in 192 countries and regions, with more than 169 million cases reported worldwide, according to the U.S.-based Johns Hopkins University.