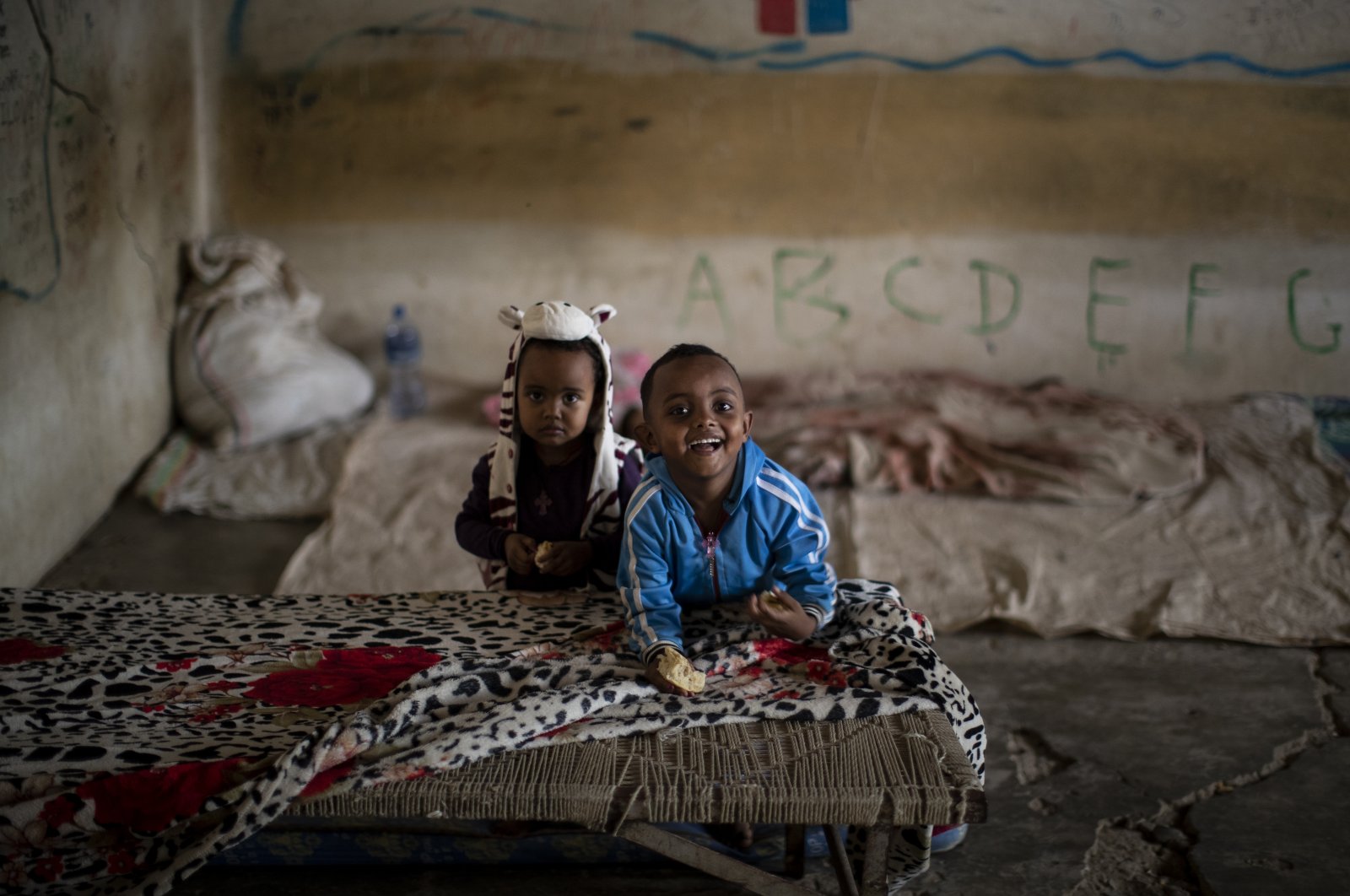 Young Tigrayan children play in a classroom where they now live at a camp for the internally displaced in an elementary school in Mekele, in the Tigray region of northern Ethiopia, May 10, 2021. (AP Photo)
by French Press Agency - AFP
Jun 01, 2021 4:56 pm

The United Nations said Tuesday that more than 90% of Ethiopians in the war-torn Tigray region need emergency food aid and appealed for over $200 million to scale up its response less than a week after the body's official called for United Nations Security Council (UNSC) action to avoid famine.

The U.N. World Food Programme (WFP) voiced alarm that the conflict had caused an increase in hunger levels that were already high in Tigray. "A total of 5.2 million people, equivalent to 91% of Tigray's population, need emergency food assistance due to the conflict," WFP spokesperson Tomson Phiri told reporters in Geneva.

Ethiopian Prime Minister Abiy Ahmed, winner of the 2019 Nobel Peace Prize, sent troops into the northern region in November to detain and disarm leaders of the Tigray People's Liberation Front (TPLF), the region's former ruling party. He said the move came in response to TPLF attacks on federal army camps.

Though he vowed the conflict would be brief, more than six months later fighting continues, reports of atrocities are proliferating and many leaders are warning of a potential humanitarian catastrophe.

The WFP said it had provided emergency aid to more than a million people since it started distributions in the northwestern and southern areas of Tigray in March.

"The WFP is alarmed at the impact of conflict on already high levels of hunger," Phiri said. "We are deeply concerned at the number of people we see in need of nutrition support and emergency food assistance. The WFP is calling for $203 million to continue to scale up its response in Tigray to save lives and livelihoods through to the end of the year," he said.

Last week, a senior U.N. official warned the UNSC that urgent measures were needed to avoid famine in Tigray, in a briefing seen by Agence France-Presse (AFP). "There is a serious risk of famine if assistance is not scaled up in the next two months," wrote Mark Lowcock, the U.N.'s top emergency relief coordinator. He estimated that "over 90% of the harvest was lost due to looting, burning or other destruction, and that 80% of the livestock in the region were looted or slaughtered."

The WFP said the instability was undermining the efforts of humanitarian workers to reach vulnerable communities in Tigray, especially in rural areas. "A cease-fire and unimpeded access are vital for the WFP and all its partners in Tigray to reach all areas and all people desperately in need of life-saving support," Phiri said.

Meanwhile, the WFP spokesperson said the agency was witnessing growing levels of malnourishment among women and children. The WFP found that almost half of pregnant or breastfeeding mothers in 53 villages were either moderately or acutely malnourished, while almost a quarter of all children screened were found to be malnourished.

Eritrean troops, who teamed up with the Ethiopian military, have been implicated in multiple massacres and other atrocities during the Tigray conflict, allegations that Asmara denies. An Ethiopian aid worker died after being struck by a stray bullet in the region, his Italian employer said Monday, the ninth such death in the conflict there.

The Ethiopian government in Addis Ababa has said it is committed to investigating human rights abuses and that it has granted "full and unhindered" access for aid workers. In a series of Twitter posts last week, the foreign ministry blamed the TPLF in part for aid disruptions.

"Remnants" of the group have "killed humanitarian workers, truck drivers and looted food and non-food items that were about to be delivered to the people who need support," the ministry said.