Afghanistan teeters on edge of disaster amid health care crisis 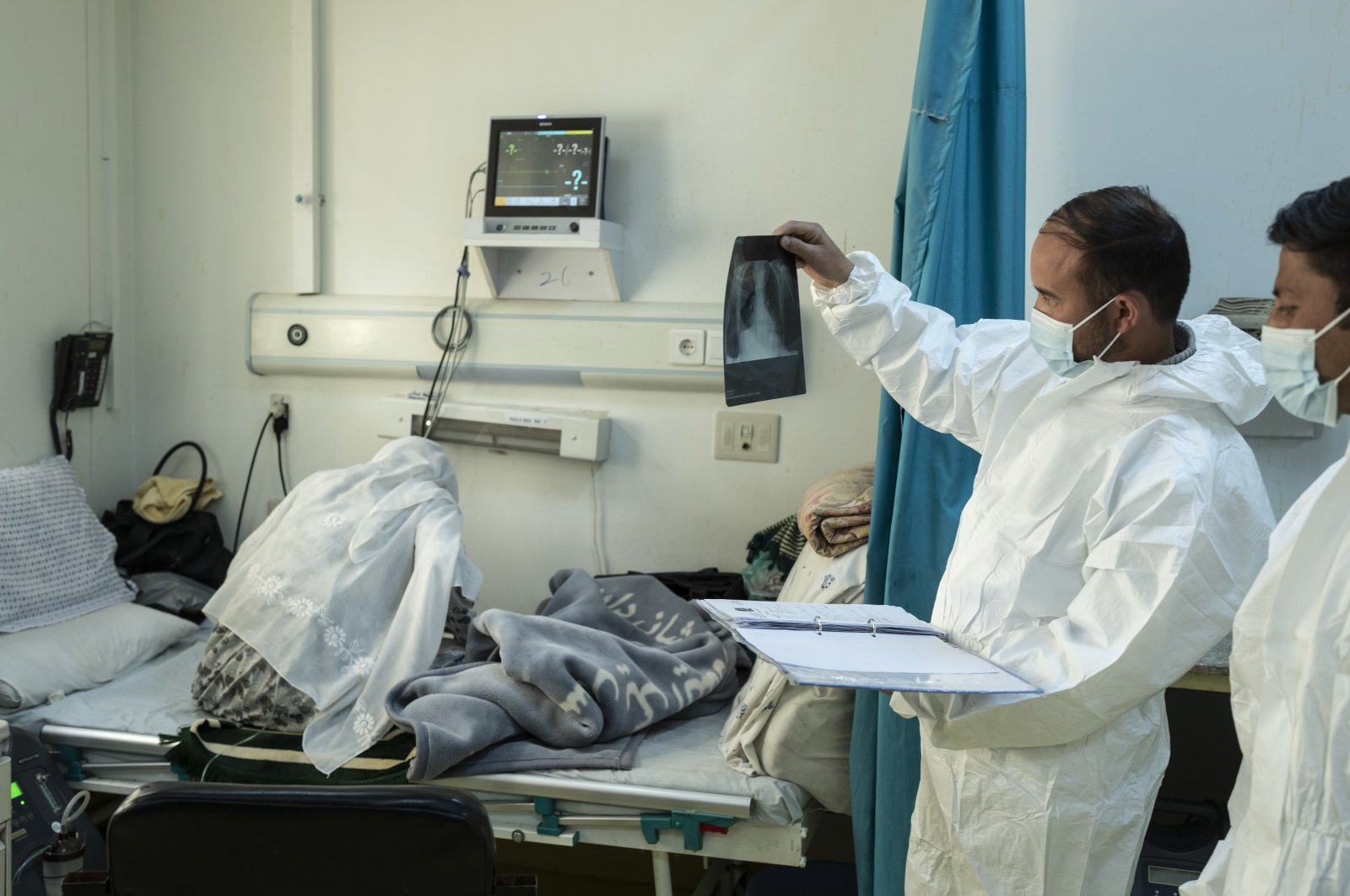 The diesel fuel needed to produce oxygen for coronavirus patients has run out. So have supplies of dozens of essential drugs. The staff, unpaid for months, still shows up for work but is struggling to make ends meet at home.

This is the plight at the Afghan-Japan Hospital for communicable diseases, the only COVID-19 facility for the more than 4 million people who live in the capital of Kabul. While the coronavirus situation in Afghanistan appears to have improved from a few months ago when cases reached their peak, it is now the hospital itself that needs life support.

Its predicament is a symptom of the crisis in Afghanistan’s health care system, which is on the brink of collapse and able to function only with a lifeline from aid organizations.

Some of the staff are in such financial difficulties that they are selling their household furniture to make ends meet, he said.

"Oxygen is a big issue for us because we can’t run the generators,” he said, noting the hospital’s production plant hasn’t worked for months "because we can’t afford the diesel.” Instead, oxygen cylinders for COVID-19 patients are bought from a local supplier.

And doctors are bracing for more infections that they fear are inevitable with the omicron variant.

Without outside help, "we are not ready for omicron. A disaster will be here,” said Dr. Shereen Agha, the 38-year-old head of the hospital’s intensive care unit. The hospital was short even of basic supplies like examination gloves, he said, and its two ambulances sit idle for lack of fuel.

The director of the Center for Humanitarian Health from Johns Hopkins University Pail Spiegel told British newspaper The Guardian said that the response to the COVID-19 pandemic had nearly stopped in Afghanistan and urged a more detailed reaction to Western sanctions to stave off a more serious public health disaster.

“It’s really bad and it is going to get a lot worse,” Spiegel said. “There are six simultaneous disease outbreaks: cholera, a massive measles outbreak, polio, malaria and dengue fever, and that is in addition to the coronavirus pandemic.”

According to him some parts of the primary health care system were funded 20 years ago, but most remained largely unsupported, even as health officials, international organizations and nongovernmental organizations (NGOs) have been urged to resume programs that had been suspended after the Taliban seizure of Afghanistan in August 2021.

The previous government had contracted with a Netherlands-based aid group, HealthNet TPO, to run the hospital. But the contract expired in November and was financed under a fund managed by the World Bank, which like most of the international community has frozen payments to the new Taliban government.

HealthNet TPO program manager Willem Reussing said the organization is in negotiations to secure funding, "but the donor community is very reluctant to continue support and has strict conditions.” The World Health Organization (WHO) and UNICEF were only managing to maintain minimal services and did not cover the coronavirus response, he added.

"The health care system ... is really on the brink of collapsing,” Reussing said. "The Afghan-Japan Hospital is a dire example, where we are nearly begging donors to step in and save lives.”

When the Taliban took control of Afghanistan in August amid a chaotic United States and NATO troop withdrawal, the international community pulled all funding and froze billions of dollars of Afghanistan’s assets abroad. For a country heavily dependent on foreign aid, the consequences have been devastating.

The economy already was deeply troubled under the previous government, with state employees often going unpaid. Last year, almost half the population was living in poverty, with the situation made worse by the pandemic and a drought that has driven up food prices.

The Taliban government wants the international community to ease sanctions and release Afghanistan’s assets abroad so it can pay civil servants, including doctors and teachers.

The United Nations has sounded the alarm over a hunger crisis, with 22% of Afghanistan’s 38 million people near famine and another 36% facing acute food insecurity.

"We’re seeing the economic collapse being exponential,” U.N. humanitarian chief Martin Griffiths said in an interview last week with The Associated Press (AP). "It’s getting more and more dire by the week.”

Nowhere is that more evident than the malnutrition ward of the Indira Gandhi Children’s Hospital, where anxious mothers sit by emaciated children.

Two-year-old Mohammad, his cheeks sunken and his hair sparse, sipped a cup of high-nutrition milk with his mother, Parwana, beside him. From the central province of Wardak, she had been sleeping in the hospital for six nights.

"I don’t even have money to change his diapers,” the 20-year-old said. Her husband, a tailor, lost both legs in a roadside bomb several years ago, and has trouble sitting up. Work is hard to come by, and Parwana said her father and brothers are helping the family of three survive.

In the next bed, 1 ½-year-old Talwasa lay covered in blankets. Only her eyes moved behind half-closed eyelids.

"We are in a very bad situation,” said her mother, Noor Bibi, who has six other children. Her husband can’t find work, she said, and "we only eat dried bread and can’t find food for weeks and weeks.”

Deputy Health Minister Dr. Abdul Bari Omar said last week that Afghanistan had 3.5 million malnourished children, although he noted that the data was from the previous government.

"It didn’t happen in the last four months. Malnutrition was inherited from the previous system, but we are trying to find a solution for this problem,” he said, adding that the former administration also had failed to resolve shortages of medical equipment.

The deputy director of the children’s hospital, Mohammad Latif Baher, said the facility had seen 3,000 malnutrition cases in the last four months. Of those, 250 were hospitalized and the rest were treated at home.

Hospital workers also are struggling with shortages, and they have not been paid for months.

"We are loyal to our homeland and our profession. That’s why we still continue our jobs and provide services to our patients,” Baher said, noting they have gone without salaries for five months. He said the hospital also is running low on drug supplies, including special food supplements for malnutrition, as well as antibiotics, analgesics and anesthetics. Some supplies had come in from aid agencies, he added, but more were needed.

The situation was similar at Wazir Mohammed Akhbar Khan National Hospital, where supplies were running low. As with most of the other state-run hospitals, its patients must buy their own drugs, with staff only dipping into emergency supplies for those who truly cannot afford it.

Sometimes doctors are forced to give smaller doses of drugs because they simply don’t have enough, said Ghulam Nabi Pahlawi, the emergency department’s head nurse.

But it is in Kabul’s COVID-19 hospital where the situation seems most severe. Pharmacist Bilal Ahmad said more than 36 essential medications had run out and many others had expired. In three months, he said, another 55 medications will run out.

"The requirements, we cannot fulfill them,” Ahmad said.

Amid the growing threat to health and well-being of Afghans, including many children, 15 aid organizations from the United Kingdom, namely Save the Children, Islamic Relief and the British Red Cross, said they will ask the public to make donations to support Afghanistan and its population.

Warning that millions are in the threat of famine the U.K.'s Disaster Emergency Committee (DEC) said the country is at a "tipping point" because of drought and COVID-19 pandemic as well as long-lasting conflicts. DEC urged international community and the public to help as millions of children could die this winter with temperatures expected to decrease to as low as 12 degrees Celsius (10 degrees Fahrenheit) this year and in 2022. According to it, some 8 million people are at the risk of hunger, while 22 million people do not have enough food to eat.